Baked this two weeks ago. I'm very new to bread baking, having only started about 3 months ago. This was my second sourdough loaf. Whilst I appreciate the fact that my fellow forum users can't taste the bread I do appreciate any comments/constructive criticisms based on the pictures I've taken.

The annoying thing about artisan bread, for me, so far has been the fact that the crust turns chewy a couple of hours. This wasn't a major issue as I always toast my bread slices prior to consumption anyway. But I wonder if it's meant to be like that?

Here are the pics: 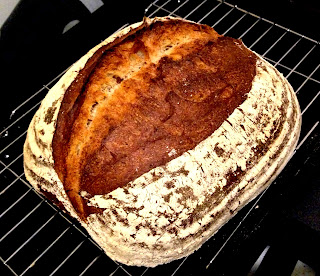 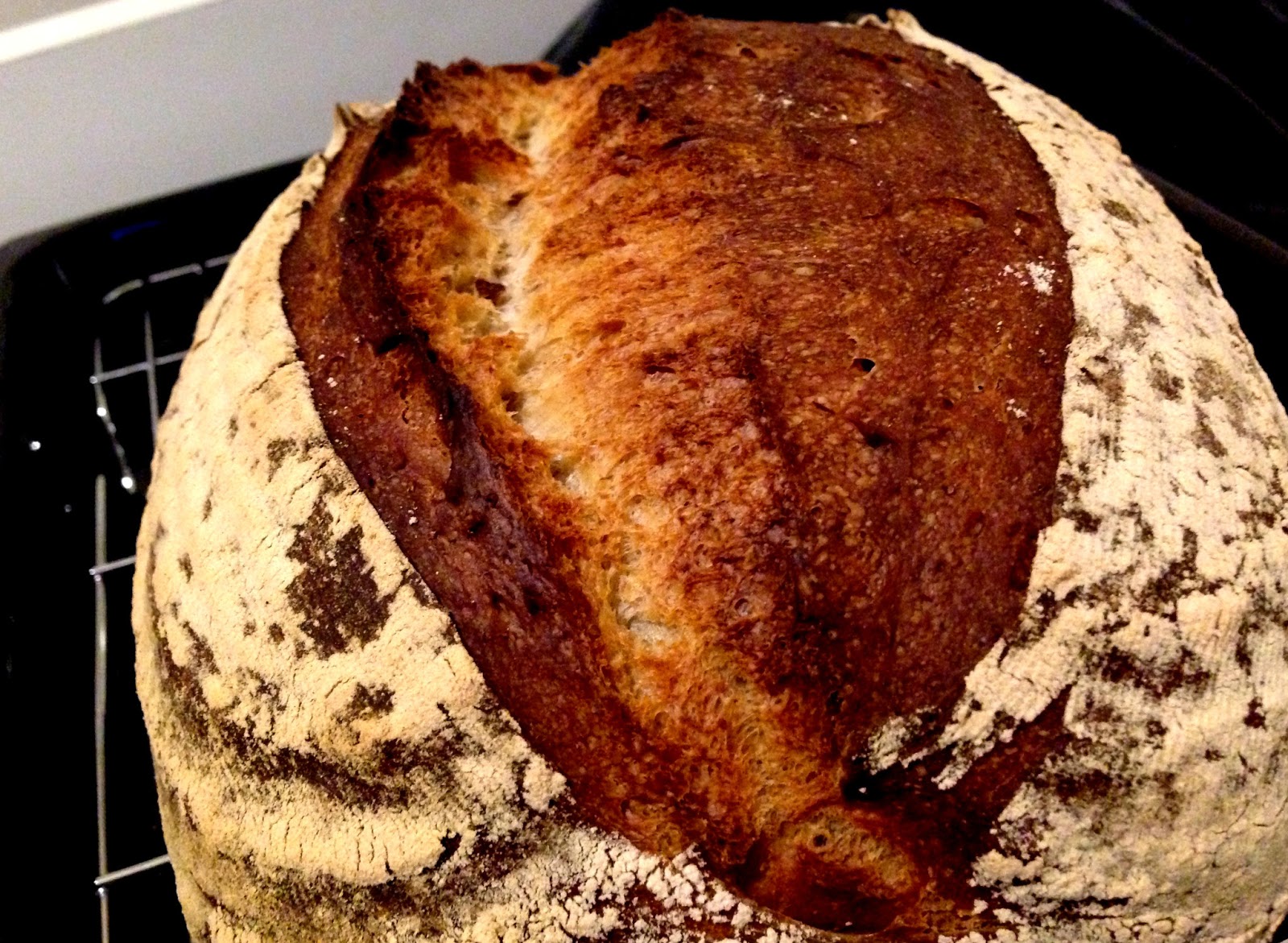 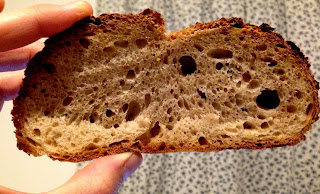 If that's what you're producing after 3 months, kudos to you!  The crust on hearth breads is going to soften after a number of hours.  You might extend your bake a bit longer, though I think the color on your loaf is beautiful.

I'd stay with your program.

Cheers Larry! It's nice to hear that from an experienced baker like yourself. I actually  started off my bread baking adventure with baguettes, which in hindsight was a terrible mistake. That said I felt that I'd learned so much from the mistakes that I made when I was working those baguettes which I think has now come in handy with my sourdough loaves. The best thing about home baking is I learn something every time I bake and also from seasoned bakers on forums like this. :)

Those are very attractive loaves, Kong.  Even more so given your recent start with baking!

A high hydration dough makes for lovely oven spring when baked on a hot stone but it also tends to produce a chewy crust after the bread has cooled thoroughly.  Not all of that moisture gets baked out (which is a good thing!) and one of the side effects is that the moisture eventually equalizes throughout the loaf, softening the previously dry and crispy crust.

All the good comments aside (which I absolutely appreciate), is there anything you think I could have done better? Other than perhaps go a bit easier on the flouring of my proofing basket? :D

no, there really isn't much to offer in the form of constructive criticism.  You obviously nailed the dough development.  Fermentation appears to have been good, too.  I prefer a bold bake, so the color is very much to my liking.  Some might suggest that you drop the baking temperature a few degrees but that is purely a matter of taste.  Since it appears that you are using a brotform to support the shaped loaves during final fermentation, you don't want to skimp on the flour lest you risk sticking.  Perhaps use a pastry brush to flick any loose flour from the loaf before slashing; then again, part of the appeal of using brotformen is the floury lines they leave on the loaf.

If there is anything to be suggested for improvement, it might be in the area of slashing/shaping.  Maybe.  The loaf does appear to have grown sideways, away from the line of the slash, more than up.  Was that because the final shaping wasn't quite tight enough?  Or because the slash was a tiny bit too deep?  I can't say.  All things considered, I'd be very pleased to call it one of my own.

What an insightful reply. I do think I may have slashed it a little too deep. I was a little worried when I sent it into the oven at first but was obviously pleasantly surprised that it turned out to be the best I've made so far. Perhaps I could have shaped it slightly tighter too because I was very concious of not wanting to knock out too much gas. Oh well at least I now know what to experiment on in my next bake! I can't wait to try out txfarmer's SD Hokkaido milk bread this weekend (which is gonna be totally different from this pain rustique on all levels ha!)

SD loaf this one is pretty nice.  Can't help you with the chewy crust 2 hours after it bakes,  It's the nature of the beast.  Even leaving the loaves in the off oven on the stone with the door ajar for 10 minutes gives you a crunchy crust when it comes out but it too goes soft and even more chewy.  Luckily I like the thick chewy crust!

So what was your recipe that turned out such a nice loaf inside and out?

regarding the chewier crust if the bread is left in the oven to cool. That also means the crust will be a tad too crunchy when reheated the next day. I think I'd rather have a softer crust so that when reheated it is perfectly crisp. I too like the chewy crust but I tend to change my mind after 5 minutes because my jaw gets sore quite quickly haha! I used the recipe from the Weekend Bakery. It's a half sourdough because there's some instant yeast in there too.

Here is the link: http://www.weekendbakery.com/posts/our-version-of-a-pain-rustique/

you that I loved your mushrooms on the Christmas Log. Beautiful.

:) That was my favourite part of the making of the yule log. The rolling of the roulade was a nightmare though.