what characteristics should your bread have to make you wish you didn't turn on the oven that day? When does your bread make you think "better feed it to the chickens"?

In my case it's chewyness. I really can't stand it,  I find it hideous. I can tolerate tough bread, or dry, not totally baked, too moist, too dense, but when it's gummy  I search the nearest chicken:)

I refer to this as my "Cow Pie" bread because it looked and smelled exactly like something left behind a cow. My first attempt at sour dough whole wheat - fed it to the crows and gulls in the back yard!

I refer to this as my "Cow Pie" bread because it looked and smelled exactly like something left behind a cow. My first attempt at sour dough whole wheat - fed it to the crows and gulls in the back yard!

I have made a few loaves that looked rather wonderful but,alas, I forgot to add the salt. If it has a good texture, I might try to make something with it like pizza or french toast but otherwise-yuck- even though I'm someone that does not like a lot of salt, I have to have some salt.

Straight-through bread with high level of commercial yeast. Might as well spoon it up right from the yeast jar. I strongly dislike those loaves. They usually have 3-6 teaspoons of yeast in the recipe. I learned early on about this and rarely use more than 1 to 1 1/2 tsp per 4 c flour-even on commercial yeast only recipes.

I agree with you about chewy or gummy bread. Yuck! Unless it is supposed to be heavy like a dense rye or pumpernickle or poss heavy multigrain wheat. I don't like adding gluten to any of my recipes for that reason. Even if you achieve an open crumb, there is just a certain chewy toughness I find unpleasant.

Not enough grains in multigrain. I don't like it when a loaf has a few chewy lumps of multigrain that occasionally appea,r seemingly accidentally, as you chew. It seems like a mistake. Either have enough lumps to know it was done on purpose or have no chewy lumps at all and grind the multigrains down to flour.

come out green with little red hairs growing out of it nor should it come out red with little green hairs coming out of it.    My apprentice has a bad thing for green and red but is fine with any other colors and hairs in her bread.  I think it is possibly a German or even hairy thing common to her family.

Unless you're actually making Pane Toscano . . .

I doubt that there's someone in the universe that hates pane toscano more wildly than me:)

Q: How do you turn bread into gold?
A: Add twenty four carrots!

Q: If you hold 9 rolls in one hand and 10 crossants in another, what do you have?
A: Really big hands!

Q: Have you heard the joke about the butter?
A: I better not tell you, it might spread. 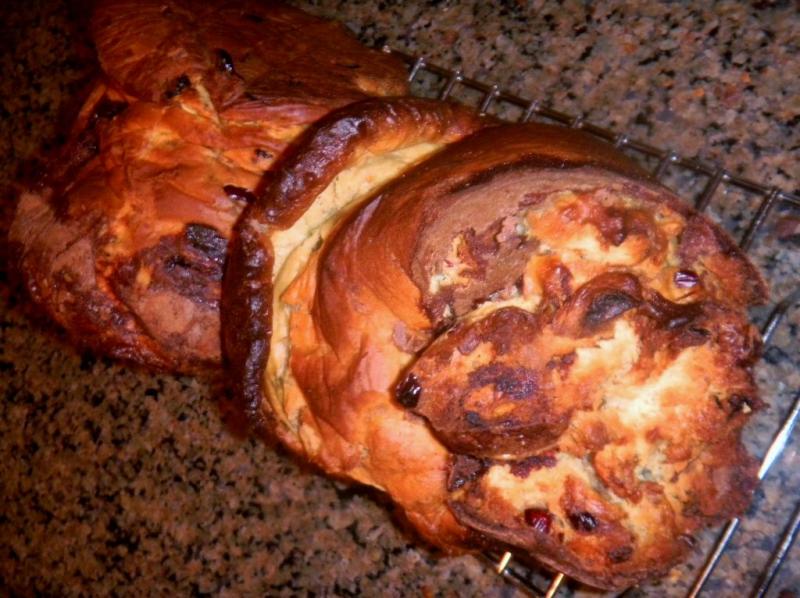 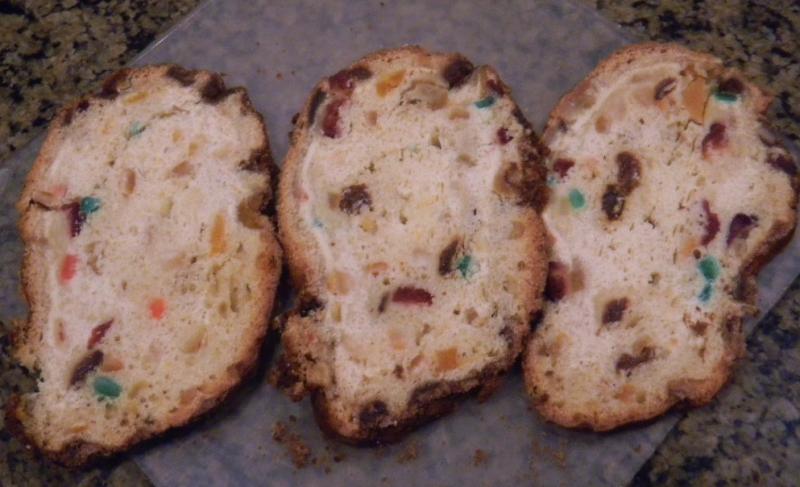 considering the fall, really. My friends have been making for of me for years after having seen "the little green men" in the slices. I never understood why, after all they were candies like any other.

I hope you didn't use them for sandwiches:)

normal kind.  I spread minneola marmalade on them then put a layer of whipped cream followed by chocolate sauce  and chopped nuts another layer on top with a capper od another layer with  a red cherry on top.

One of the finest tall and royal deserts of all time, even if you have lived more than one life like Ian's 5 apprentices!

I learned so much from my disaster loafs, learned ten batches worth of regular loaf experience. Anybody can bake a great normal loaf but inventors must experiment in pursuit of greatness.

I agree with the expression I heard recently heard said, " hurry up and fail".

Severely overproofed, in other words.  Better to try to salvage it by treating it as old dough, or just pitch it in the trash, than try to bake it as is and wind up with what is described in the subject line.

Paul, all my attempts to add old dough to the bread ended up in total dough dissolution, even in small amounts. Moreover I noticed that even when the bread comes out fine the structure of the crumb is much looser than the one I like. How much do you use?

and I am sorry for that.  My use of old dough has been so limited that I can't offer sensible advice.  The bulk of my baking is with sourdough, so old dough has seemed redundant to me.  I saw that you participated in the recent discussion where Andy provided some guidelines for using old dough from his commercial baking experience.

What you describe seems to fit with Andy's notion that old dough is used as a dough conditioner to increase extensibility.  The looser crumb and the tendency to dissolve suggests that the old dough you have used contains a fairly high load of protease.  I'm not sure what options there are for moderating that.

@Mini- so funny! :)  Love seeing all these mistakes- thanks for the smiles, and, as I nod with recognition, for making me realize I'm not the only one to ruin a beautiful pizza or loaf of bread with a slip as I was putting it into the oven.

I've definitly made my share of bread mistakes!  There was a while, when I was first starting to experiment with bread, when my kitchen was awash in breadcrumbs and french toast.  Now, thankfully, I have learned enough from those mistakes that things rarely go seriously wrong.  The most important lessons were to watch the dough and know what it is supposed to feel like (or in the case of sourdough starters, smell like) at various stages.

Must say that the current attitude expressed by some pros- that bread cannot be overbaked- is just hogwash.  I'm all in favor of a darker crust, though this works better on white-flour doughs than it does on whole grain, but to my way of thinking it has to be accomplished by a hotter oven (rather than a longer bake) so that the crumb remains soft and moist.

It's one thing when an experiment or big mistake produces a poor loaf, that is sort of expected.  For me, nothing is worse than tending a dough for a couple of days, thinking everything is going well, then finding that it has a firm, un-moist crumb from baking too long.

wholemeal bread that feels like biting cardboard:) I really can't stand it.

I always  wonder if, after all, wheat bran is so different from wood sawdust. Cellulose, lignin ... does it sound a bell?

I prefer whole grain breads to white breads but do agree with you that they should be moist and flavorful.

Had you seen the bag of wheat bran that I used for coating my whole wheat sourdough this past weekend, it would have reinforced your suspicions about a link between bran and sawdust. ;-)  However, let me assure you that an equivalent volume of sawdust would have weighed more than the bran and the sawdust would also be more difficult to chew.

Thanks for the humor, friend.

I just made one that looks much the same. Couldn't lift it out of the bowl after prove - almost had to pour it.

Frustating as I made one last week using same recipe, technique and starter & it worked out fine.

I'm still trying to acquire a 'feel' for baking. My problem is that I come from the I.T. field where procedures are detailed and exact. Currently, successful bread making seems to me to be more a case of luck than judgement.

search:   thiol compounds, Wink  about 10 days of careful feeding can cure it, if that is the problem.  see if the problem applies.   If you are having a lot of hit and miss loaves, you may need to work on your starter maintenance.