what "kind" of mixer is this?

what "kind" of mixer is this?

anyone know what kind of mixer this is?  planetary?  thanks. 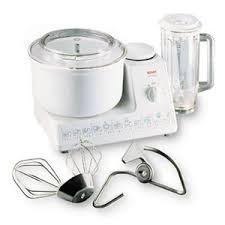 This is a Bosch Universal (older version).

It's sort of a planetary/vertical mixer. That is, the mixing heads are driven by a drive shaft at the center of the bowl, which move the mixing heads around inside the bowl. The bowl itself is fixed and does not move. I say it's "sort of" planetary because some attachments (like mixing whips) have a orbital/planetary action, while others (dough hook) do not.

Here's a youtube video which shows the action of this mixer.

Feedback needed - sourdough loaf
My Foolproof Step by Step Recipe
Large Bubbles, Just Underneath the Crust
Deflating on the scored side
What is a seed starter?
END_OF_DOCUMENT_TOKEN_TO_BE_REPLACED