The first week of December featured a lot of baking, in marked contrast to the prior week.  Having my hands in that much dough was a genuine pleasure.  Even better was the knowledge that most of it was for the benefit of others, rather than for myself.

On Saturday, December 1, I finished my shopping and dropped off the ingredients in preparation for a class at the Culinary Center of Kansas City.  I also prepared biga that evening for a batch of Stollen.  On Sunday afternoon, I prepared and baked the Stollen, three loaves worth, and two loaves of a Bohemian Christmas Braid.  Students who get to see what the finished product looks like, and enjoy eating it, in class go home happier than those who do not.  (And they did like the taste of these breads!)  On Monday evening, I prepped enough biga for 20 batches of Stollen.

The Bohemian Christmas Braid, before and after glazing (it's easy to see why my wife handled braiding duties for our daughters' hair): 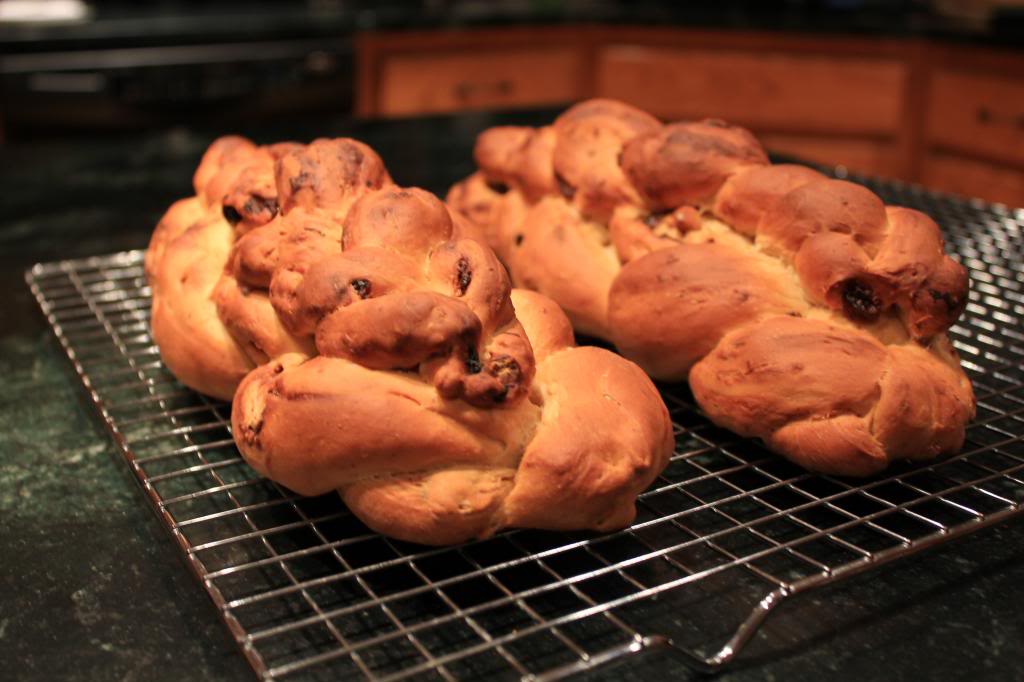 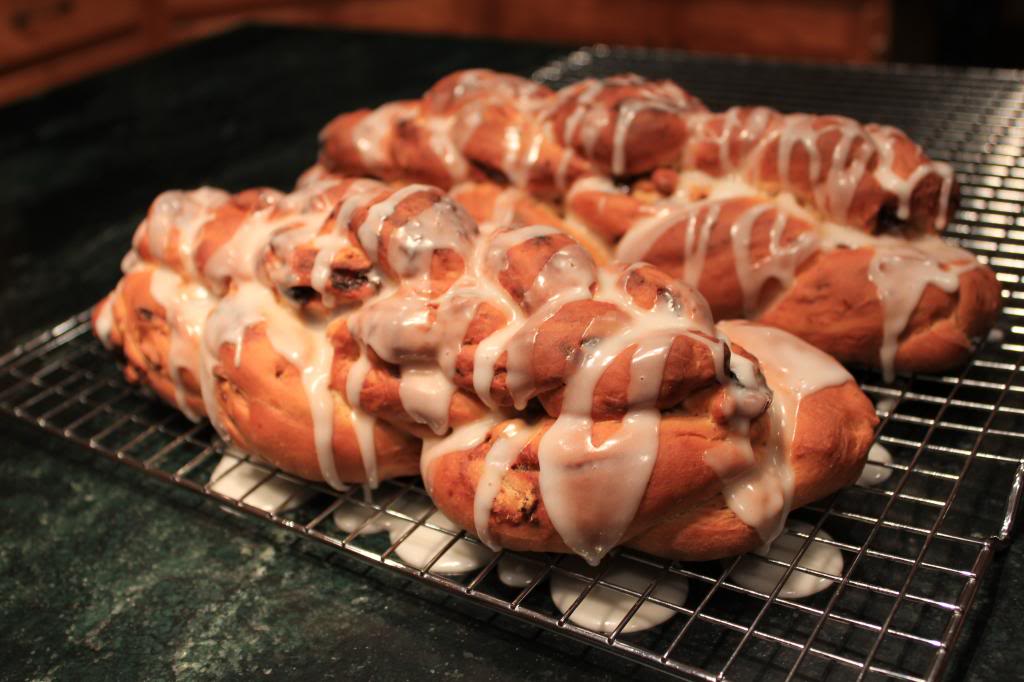 And the stollen, prior to basting with melted butter and blanketing in sugar: 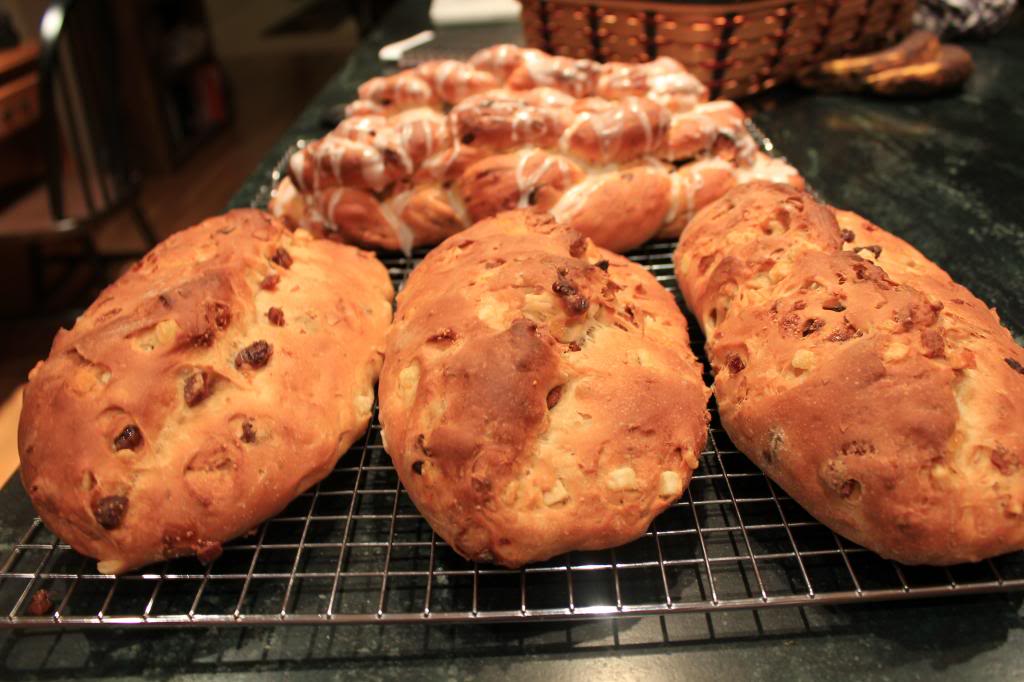 The class on Tuesday evening ran from 6:30 to 9:00.  I arrived at the Center just after 4:30 and spent the next couple of hours prepping ingredients, portioning the biga, and prepping one batch each of Stollen and Braid dough so that they would be available for demonstrating shaping techniques.  Meanwhile, my assistant was setting out the required implements at the student workstations and taking care of other room preparations.  The students started rolling in as we were wrapping up our set-up steps, so we were able to start right on time.

The students ranged from bread baking newbies to experienced bakers wanting to pick up some additional information about the specific breads being taught that evening.  For instance, one lady was curious about what adjustments she would need to make since she mills her own flour at home.  Regardless of their experience levels, they were a wonderful group to work with and I thoroughly enjoyed our time together.

It’s interesting how little things crop up.  We ran short of fruit peel for the Stollen because I made a mistake in my estimating.  However, we had more raisins and currants than required, which I had anticipated, and that allowed us to make up for the shortfall in the fruit peels.  It also gave a good opportunity to illustrate how to be flexible while baking, adapting to unforeseen circumstances.  I’m still scratching my head about the flour though.  Since I didn’t have the final count when I shopped, I assumed that all 20 places would be filled.  From what I calculated, we needed about 42 pounds of flour; therefore, I picked up a 50-pound sack at Costco.  We used up every bit of that flour and pulled some from the Center’s pantry!  Since I haven’t found an error in my calculations, it’s still a mystery to me how that much flour was used.

On Friday, December 7, I baked 6 loaves of a Honey-Oatmeal Cinnamon Swirl Raisin Bread, adapted from the Honey-Oatmeal Sandwich Bread in the KAF Whole Grain Baking book.  Six, because that’s as many 9x5 bread pans as I have and because that’s as many as can easily fit in my oven.  Then on Saturday I made 4 more loaves.  We hosted the Christmas party for my wife’s colleagues on Sunday and the bread was for gifts for them and for some other friends.  And one for us, too!  In addition to making fabulous toast, this bread goes really well with ham and cheese.  Other baking that Saturday for the party included about 3 dozen Eggshell Rolls from Clayton’s Complete Book of Breads and Rye Rolls, source not recalled at the moment.  The Rye Rolls got a bit of a tweak when I substituted 1 teaspoon of caraway and ½ teaspoon each of coriander and fennel seeds, crushed, for the called-for 2 teaspoons of caraway. 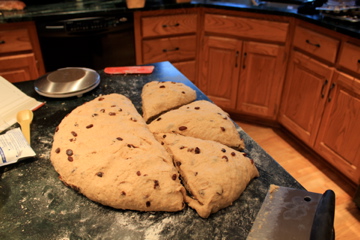 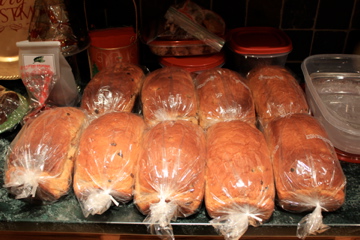 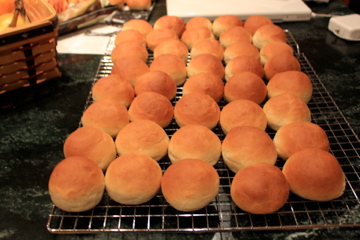 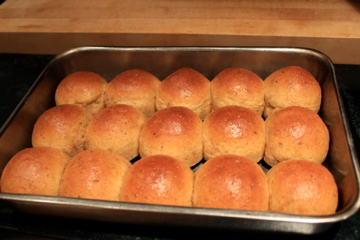 The  Honey-Oatmeal Cinnamon Swirl Raisin Bread also marked the first time I have used the Great River brand of whole wheat flour.  I had picked up a 10-pound bag at our local Costco, having seen it there for the first time.  I believe PostalGrunt mentioned it in a recent post of his, too.  Based on my experience, I like this flour.  The grind is quite fine.  I should buy some Wheat Montana flour again to see whether one has a finer grind than the other, or if their textures are approximately equal.  The bran flecks are the same size as the rest of the particles.  My first guess would have been that the flour is produced with roller mills but the Great River Milling site says it is stone-ground.  Although I couldn’t locate a precise analysis, GRM says that their bread flours are milled from hard red spring wheat and “we strive to purchase wheat that contains 14 percent protein and strong gluten content.”  From a purely empirical point of view, I’d say that they hit their target for the bag I purchased.  Not surprisingly, I had to increase the liquid content to achieve the desired dough consistency.  The resulting dough handled well and rose well, too. 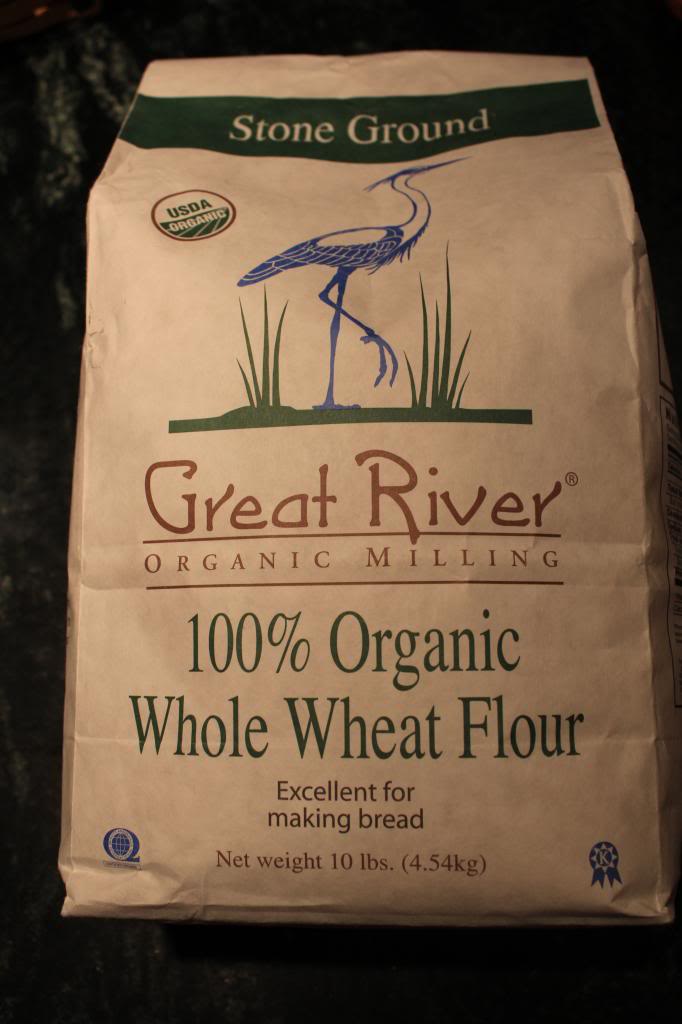 This past weekend I made a batch of Cromarty Cob from Andrew Whitley’s Bread Matters. Having blogged about this bread previously, here, I won’t go through a blow-by-blow account this time.  I made two deviations from Mr. Whitley’s formula and process.  First, I increased amounts by 50% to produce two medium-size loaves, rather than one large loaf.  Second, I let fermentation proceed at ambient temperatures in my kitchen, which ranged from 65-68F, instead of the recommended 82F temperature.  As a result, fermentation times for the levain and for the final dough were in the 12-hour range, each.  With the whole-wheat content being approximately 50%, this yielded a bread with a noticeable sourdough tang.  The wheaty flavors that were masked by the cinnamon and raisins in the Honey-Oatmeal Cinnamon Swirl Raisin Bread get to shine in this loaf, too.  I expect that using a higher fermentation temperature would lead to a bread with a more subtle sourness and, therefore, a more wheat-forward flavor and fragrance.  As it is, I’m every bit as happy with this bread as I was the first time I made it.  And I’m happy to have found another high-quality whole wheat flour to work with that doesn’t inflict exorbitant shipping costs.

Since odds are pretty good that I won’t post any new blog entries between now and Christmas, please let me wish each of you a blessed and merry Christmas.

I've been doing more and more of the stacked braiding and if you don't mind here are some tips:  After braiding the bottom deck, use a rolling pin to slightly flatten the center of the braid so that the second braid will have a firn footing and second (this is the real secret) use an egg wash on the first braid and allow it to dry until tacky.  Then the top braid won't slide around during baking.

Seems like we are still reatining our old scaling skills - good luck with the mystery of the flour...

Happy Holidays to you and yours!

Yeah, scaling, I have no answer.  My only guess is that since we were working with volume measurements (the Center doesn't have enough scales for a group that size), some folks may have dug out some hefty cups.

there you go - it wasn't your fault!

Seems like I'll be returning to doing some consulting at OXO - should I use my discount to pick up a few scales?

of fine Christmas baking Paul.    You have been a busy baker.  After seeing the egg shell rolls I went to get the recipe from Clayton's book, the only bread book I have,  but in the 1973 first edition that I use it is no where to be found. He must have added it in later editions.

Nice baking Paul and Merry Christmas to you too!

Mine was purchased in the 80's.  Matter of fact, I think the title might even be "The New Complete Book of Breads".  I did find a link to the recipe, here, if you want to try it.

I've been looking for a crispy roll recipe for some time,.

Yummy. All that delicious baking really embodies the spirit of sharing during the holidays. Merry Christmas to you, too!

And it's a good thing that we save them for holidays.  I'd look like the Graf Zeppelin if those were part of my daily diet.

your house must be a yeast friendly environment.

It's not that I need more flour but I think I'll find my way to Costco and investigate your findings. Keep on baking!

Snag a bag whenever you are in Costco next.  I think that you will like it.

I saw yesterday a braid held in place by tooth picks, seemed to work quite well.

No doubt the toothpicks would make effective anchors, Karin.  I'm leery of being the unlucky soul who "finds" one with his mouth.  Could be even worse than finding a pit in cherry pie.

Wishing a Merry Christmas and a happy New Year for you, as well.

what an assortment of beautiful breads, Paul! I wish there would be a cheaper source of organic flours here in Dubai, there just isn't any. the cinammon oat raisin bread looks like a keeper! i'd have give that cinammon raisin recipe in WGB another try, it was a hit.

Merry christmas to you and yours, Khalid

Cinnamon is almost magical, isn't it?  It is so delicious in its own right and marries beautifully with other favors, too.  That makes the cinnamon-raisin bread a real treat.

Merry Christmas and a happy New Year to you.

Beautiful and bountiful holiday baking!  I like the look of the braids, especially after glazing- they're inviting and appealing to me :)  I'll bet everyone on your gift list is happily anticipating those loaves.

They taste much better than they look.  ;-)