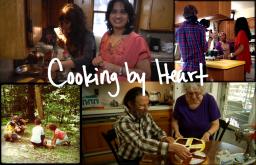 It was a treat to spend the day with Chitra and her dad while we shot this piece and learned from a master. Chitra’s father, Vishwani, shares his method of making chapati, also known as roti, a flat bread most commonly prepared in northern India. Vishwani grew up in Allahabad, one of India’s oldest cities, where he learned to prepare chapatis by watching his mother and then as time went on, by refining his own technique. On the shoot, Vishwani told us about leaving home for college, which is when he first began making chapati. Later, when he met his wife, Prathima, he continued to make chapati. Prathima is from south India, where rice is more commonly served as a staple. To this day, Vishwani remains the primary chapati-maker of the house. And since Vishwani and Prathima make chapatis weekly, they’ve become masters. It seems like making any kind of bread dough takes some experimentation to get it right.

When I asked Vishwani about the importance of passing down the tradition, I was excited by his response. He pointed out that traditions are not a one way street. They aren’t blindly passed on and can’t be forced onto the next generation, but rather they are actively accepted, practiced and kept alive by the younger generation. It’s refreshing to hear a different perspective and to consider that we are not just vessels but we are active participants in creating new traditions and keeping old traditions alive. Vishwani can teach what he knows, but it’s up to Chitra to keep it going, if she so chooses. As he tells Chitra, he teaches procedure, technique is what you figure out on your own.

Vishwani and Prathima reside in Alabama, where they both work in the Computer and Electrical Engineering Department at Auburn University.
Chapati

Method
Sift the flour into a bowl and slowly add water while kneading until you get to a dough that is soft, smooth and pliable. The longer you knead the dough the better but 5 minutes of heavy kneading will do.

Take the dough ball and cover with a damp cloth for a minimum of 30 minutes (you can also make the dough and put in your fridge for making another day).

Divide the dough into 6 dough balls or loee and roll them in flour.

Flatten each each dough ball with your palm and roll out to a 6 inch diameter, using extra flour so it does not stick.

Heat an iron skillet on medium heat. When it is hot (water drops should sizzle immediately), place roti on.

Let it cook and when you start to see bubbles form in many places, flip it over and cook until the other side does the same.

Over a medium flame, with flat tongs or chimta place the roti until it blows up or browns on both sides. (If you are cooking on an electric stove, you can press the roti in different places with a cloth to make it blow up a bit right on the skillet)

With the tongs, hit the roti against a surface to shake off any excess flour.

Butter one side with ghee and place in an airtight container lined with paper towel.

Vishwani and Chitra, thank you for sharing. Franny & John, Thank you for letting us take over your apt for the day! Sintalentos, thank you for your musical consultation. Michael Legume, thanks for the audio equip. Paul, you’re the best.

Thanks for the video link, very good video.

a great video. Nice to see traditions being passed on with the history of the family too.  I never knew that the roti was flamed at the end to puff it up.  No wonder mine was so horrible :-)  Don't know how to to do that on my GE stove - maybe just throw in on the hot stove in the oven like a pita instead ?