This is my first go with Maggie Glezer's Pandoro (from Artisan Baking), and all things considered I'm quite pleased with it.  There are two amazing things about this bread.  The first is how something with that much sugar and butter can be so light and ethereal-  I'm stunned by the texture.  The second is the balance of flavors.  It doesn't come across as too eggy, it doesn't taste only of butter or vanilla, and it isn't obviously a sourdough.  But put them all together in just the right balance, and they add up to a beautiful, rounded, perfumed and complex flavor.  I was so very happy when this bread was baking, I don't think I've ever smelled something quite that good from my oven. 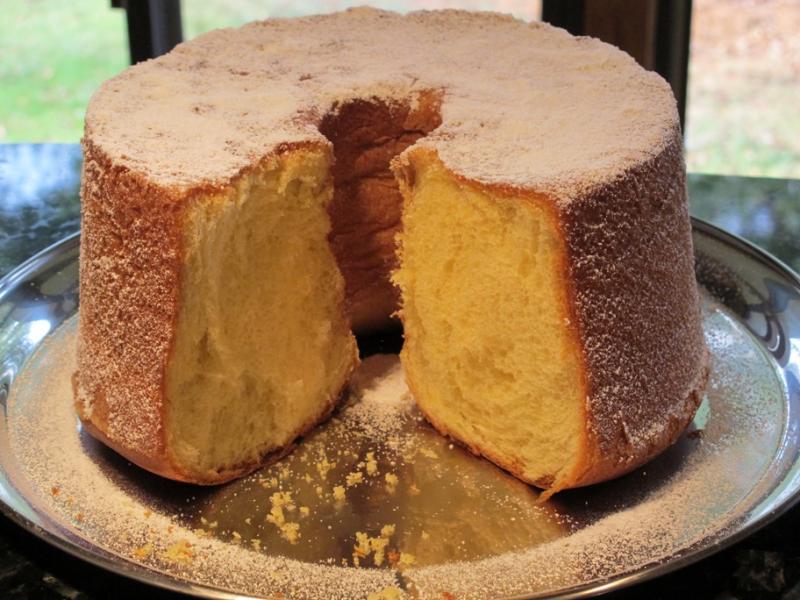 The dough largely followed the schedule in the book, with the exception that the first build took about 50% longer (6hrs vs 4) than it was supposed to, but I attribute that to my tendency to feed starters a little too early, so it needed a bit of time to catch up.  Once it did, the rest of the stages proceeded right on time.  I used my folding proofer set at 78F.

The only other issue I had was that my paddle attachment was just not capable of mixing this super-sticky yet strong dough.  I have a KA 600, and this dough only worked when I switched to the dough hook.  With the paddle, it just wrapped around and would not come off for anything, not with a spatula, not with high speeds.  I finally had to slice it off with a sharp knife. 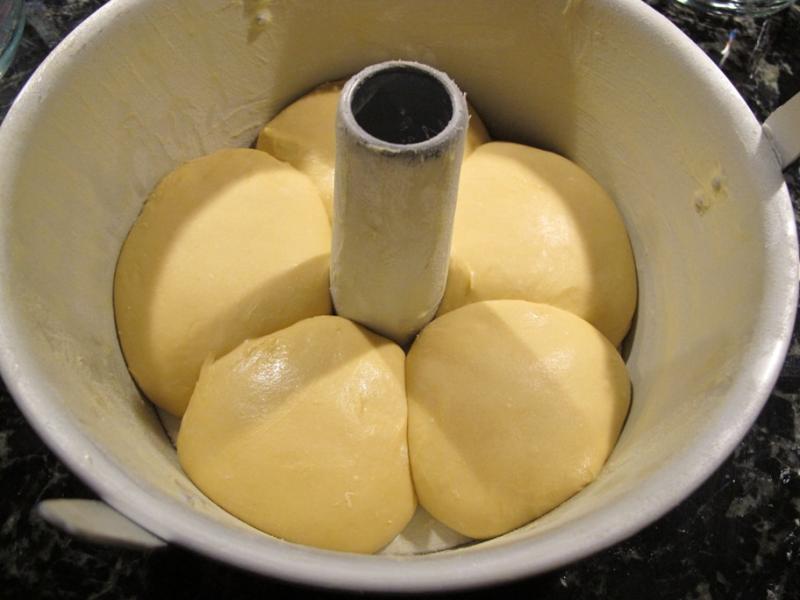 I used a large tube pan (16 cups capacity) instead of two eight cup pandoro molds, as I wanted to see how the bread was before buying more pans.  Looks like I'll be in the market for some star-shaped molds this season:)

The final proof takes the dough up by more than quadruple, from the picture above to the one below.  Not bad for a naturally-leavened bread with just 0.2% yeast. 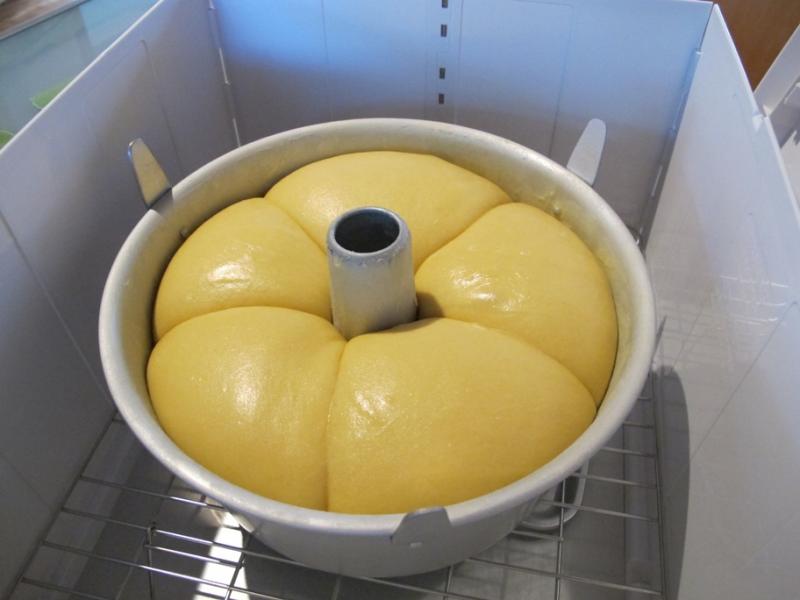 I don't want to post Maggie Glezer's recipe, but Artisan Baking is a lovely book to read or check out of the Library.  This bread was the reason I made a starter last year, and though it's taken me a while to collect all the ingredients (like cocoa butter, high-gluten flour and osmotolerant yeast), I'm glad I finally got around to making it. 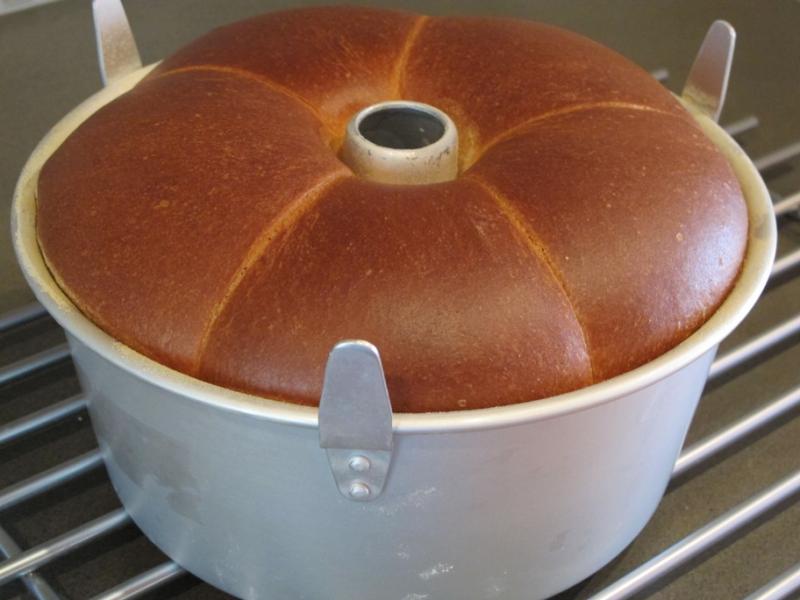 The top is prettier than the bottom, if I make it in the tube pan again I think I'll keep it right side up. 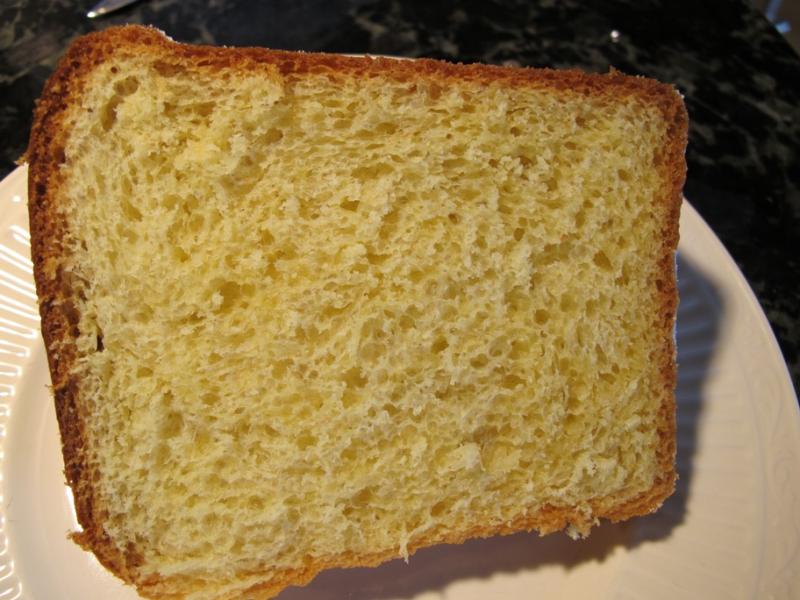 The ethereal crumb, so soft and light.  It even had a bit of shreddability.  Next time, I'll try a bit longer/slower mixing to see if I can get more shredding. 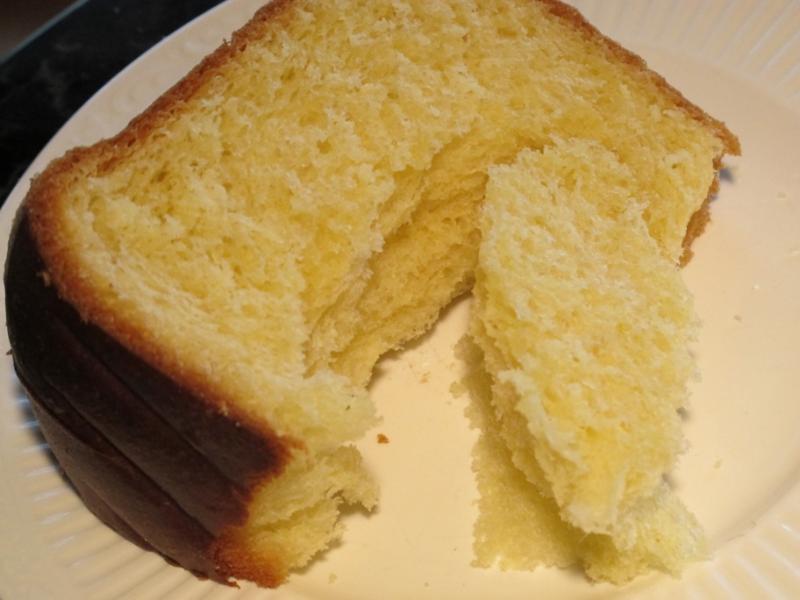 This would be the perfect seasonal viennoiserie for anyone who isn't crazy about the fruit in a panettone, or who appreciates light textures.  The bread has 17% of its flour pre-fermented, more  than 42% butter/cocoa butter, 0.2% osmotolerant yeast, 68% eggs/yolks, more than 41% sugar/honey, and hydration of 73% (taking into account the water content of eggs, honey, butter, etc.).

You seem to have nailed it; it looks great. I lived in northern Italy for 4 years, and I have certainly eaten my fair share of pandoro. It also makes a phenomenal french toast IF you have any leftovers!

I was imagining the same thing as I looked at those photos. I love this time of year because all the sweet, buttery things are getting baked!

You have excelled yourself.

@EricD- thanks so much, good to hear from someone who has eaten the real thing in Italy :)

That looks delicious.    I love the tender crumb.   -Varda

Just looking at the soft, tender crumb makes me want to take a bite. :)

@Jarkko and Varda, thanks- wish I could save a slice for you!

What a gorgeous pandoro!  Nice work :)

Thanks so much, Sylvia!  Brioche was the very first yeasted bread I made (seemed a good choice coming from a background in pastry/cakes), and pandoro is the bread that inspired me to become a sourdough baker.  Easy to see where my heart lies...

Thank you!  I wonder where I might find grappa around here?  It was wonderful with coffee this morning :)

Could you send my a slice, please?

Wish I could!  Just found out I'm to have houseguests today, guess what I'll be serving...

Pandoro!  Nice and brown, open, soft, shreddable crumb that isn't dried out, low cal .....eeerrr......well it looks low cal and you can't  tell till you taste and it is certainly lower cal than a fruited one right?   :-)

Very nice baking.  I'm still in training for 40 minutes of French slap folds required for Michael'e panettone - no mixer for that! :-)

Wow, 40 minutes of slap and fold- I'd need a few breaks in there!  Does anyone autolyse these doughs in hopes of shaving off some kneading time?  Or is there just too much sugar  for that to do any good?

Made and baked just right from the looks of it.  It just has that perfect radiance about it.   No mistaking that!  :)

Mini Oven, radiance is just the nicest word- thank you so much!

What captured my attention was how much the dough expanded during the proofing stage without collapsing upon itself and still more rise when baked.  This is something I am going to have to look into.

Thanks so much for sharing and including the great photos of your process.  Really helps to see what one is describing with words.

Thanks, Janet!  The rise is magical, I agree, it was part of what made this so appealing to make.

You should be pleased with the Pandoro Julie, it's stunning! I was trying to get a good look at the crumb on my phone today and I could sort of see that it was a nice one, but now that I've seen it properly on a full screen...Wow! It's perfect in every way, and with a lovely, light and aerated crust to complete the picture. I've looked at that formula in MG's book a number of times and thought about making it but the debate is over now thanks to you. Nice baking!

Franko, it's a lovely formula, I'm sure in skilled hands like yours it will be perfect!  Thanks so much for the kind words.

Thank you very much, Andy!

Thanks for posting your great in-process photos.

When I get really skinny, I'm gonna make one of those.

I like to think of it as a lean dessert, having less butter and sugar than a pound cake (even with the powdered sugar topping, it comes across as not too sweet).  :)

Thanks for the compliments!

Just beautiful.  Would love to have a piece with some tea right now!  I can't wait to get skinny like David or I will never get to try it :).

Thanks, Ian!  I've been loving it with my morning cappucino :)