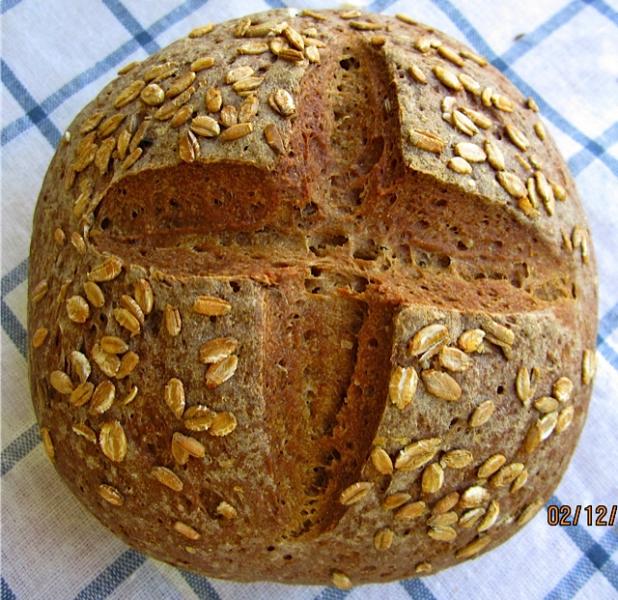 Slowly I revisited and rebaked (I learned to use the prefix "re" from the creators of our daily crossword puzzle - it is amazing how you can put a "re" in front of any given verb and come up with a new term never heard of before!) the soso breads, Arkatena Bread, Muesli Rolls (both fine now), Camembert Grape Bread, and then the Beer Rye.

I had picked Bill Middeke's contribution to Kim Ode's "Baking with the St. Paul Bread Club" because of the combination stout and rye. In my opinion nothing made with beer can be bad (unless, perhaps, it's made with Bud Light, aka dish wash water, or other beer abominations). The amount of sweeteners, molasses and brown sugar (both 1/4 cup for two small loaves) seemed a lot, so I reduced them by half, to 1/8 cup each.

The recipe, originally been posted in the "St. Louis Globe-Democrat", had called for lard or bacon fat instead of the shortening listed in Kim Ode's book. As a German accustomed to cooking with lard, and no friend of shortening, I switched back to the original piggy fat.

For the active dry yeast I used instant, my default, and, also employed my preferred S & F, plus overnight cold fermentation, instead of making and baking the breads on the same day.

Everything worked well, only the baking time was a bit longer. The bread looked really pretty, but even with the reduced amounts of sugar and molasses it was still way too sweet for my taste!

Bill Middeke, an ardent bicyclist, surely needs sufficient carbohydrates to fuel him for his athletic rides, but my bike carries me mostly to the nearby supermarket, and I get plenty of extra carbs from chocolate and desserts.

Not only that, the best of all husbands complained about the caraway. While I like it, Richard doesn't care for the taste and always finds it overdosed.

So I had another go at the Beer Rye Bread, this time cutting sugar and molasses again by 50%, adding a little more water, to make up for the molasses reduction, and using only 1 teaspoon caraway instead of 1 tablespoon.

We were eager to try the new bread - the sweetness was just right, but with less sugar the bread was a bit bland, and clearly needed more salt. And my spouse, known to be a delicate little flower, found himself OD'd on caraway again....

Relentlessly adapted to the Andersons' preferences, this final version received the stamp of approval: a tasty bread, slightly sweet, with a hint of caraway, and full of the good stuff: black Ruthless Rye. Transfer dough to lightly oiled work surface. Stretch and pat into square, fold top and bottom in thirds, like a business letter, then the same way from both sides. Gather dough into a ball, place seam side down into a lightly oiled bowl, and let it rest for 10 minutes.

Repeat this S & F 3 times, with 10 minute intervals, after last fold cover and refrigerate overnight. (I divide the dough at this point in halves, and refrigerate it in two containers.)

Remove dough from refrigerator 2 hours before using, it should have doubled.

Preheat oven to 350ºF, including steam pan. Shape dough into 2 boules or bâtards. Place on parchment lined baking sheet, seam side down, and score. Mist with water, sprinkle with rolled rye, cover, and let rise until doubled, ca. 45 - 60 minutes. Yum.  That sounds great with the orange and the caraway.

Would you mind if I featured this on the home page in a bit? I'm looking for some new things to share after Thanksgiving. These sound really hearty and apt for the seasonal.

Mmmm, you loaves looks so scrumptious! Anything with rye flour will attract my attention, but I'm sure I'd still be tempted if you omitted it. :P

Thanks for the compiment, Floyd. The TFL Badge of Honor!

Thanks, Zita, let me know if you try it.

Do you have a holiday like Thanksgiving in Cambodia?

50% Rye flour and a rye-based stout for the liquor: ruthless indeed.   The breads look lovely.

Your husband might enjoy the taste of bread spice instead of the caraway seed and with the mix of flavors (orange,rye and beer) this would be an ideal setting for it.

Maybe he is responding to the texture of whole seeds rather than the taste? When it comes to textures in my bread, I prefer either lots of texture or no texture and never just the occasional chewy bit.The bits seem so accidental when I encounter one and I want to spit it out. However,seeds on top of a loaf are good with me. Try and figure that one out!

My preferred recipe for Brotgewuertz:(spelling correct??)

It is powerful flavor so use it judiciously. There are many spice combinations for this-some with anise, and any other seed you can think of so have fun!

is some nice looking, if a little ruthless, bread.  Love the color and deep scoring with the ...eerrr....seeds on top!  Nice open crumb with so much rye in the mix too.  It has to taste good !  I'm surprised you did't sneak some anise and or coriander in there since the caraway came down a notch.

Very nice baking Hempster and Happy Thanksgiving to you and yours!

Thank you for posting the recipe, I'll have to try this as I am a lover of stout, rye and caraway (the addition of anise and coriander would be great).

What nice looking loaves.  The rye flakes give them a nice hearty/rustic look.  Healthy.

I am glad to see you are making progress with you baking challenge.  I know your list is very long and you always pick winner formulas.

beautiful looking bread!  Love your experimentation.  Thanks for sharing your recipe.

The loaves are very pretty indeed, love the colour and bold slashes of them. I'm in the same camp as your husband when it comes to caraway, just a wee bit of it is plenty for me. The orange and caraway combination of this recipe sounds quite tasty though, despite my caraway limitations. Splendid looking bread Karin!

Another beautiful loaf for the front page.  You always come up with some very tasty, interesting and easy to follow recipes.  Nice work, Karin!

I thought it was quite funny to find a Ruthless Rye Beer, just when I planned on making the bread again. The beer tastes quite nice, by the way, with and without the bread.

Thanks for the suggestion, Clazar, I use Brotgewürz in other breads, too, (usually a mixture of ground anise, fennel, caraway and coriander), and my significant other likes them, if not too pronounced. With this "challenge" bread I didn't want to change the flavors too much, but I'm sure it would be nice.

P.S. The "tz" is an old way of smelling, in modern German it's Brotgewürz.

....and that sayeth the most ruthless of seed users! Anise and coriander would definitely be a good addition.

Thanks and Happy Thanksgiving, Dabrownman,

I have to admit that the ruthless seed usage  on my part....is all your fault ....and I think I thank you for hemp part of it!

I am a curious person and always like to try something new.

Caraway can be a bone of contention, but fortunately no marriage crisis followed the supposed overdose...

I like the hint of orange in some breads, and I always grate oranges before we eat them, and freeze the zest to have a ready supply.

I try to be precise in my instructions, since not all of us are experienced bakers, and, also, keep the post somewhat entertaining. I discovered that I enjoy writing - especially for such appreciative readers as the illustrious TFL community.

Made this bread yesterday and it is outrageously good.  I cannot get over the oven spring and how moist the crumb is.  I too am not a fan of carraway seeds.  I actually upped the amount to 1 full tsp, but ground them in a coffee grinder.  I like a mild carraway flavor, but not the burst of strong carraway if you happen to bite into a seed.  I also added 5.5 tsps of vital wheat gluten as that always seems to help.  My cardiologist would shoot me if I used lard, so I subbed trans fat free shortening instead, using 34 grams.  Thanks for the recipe.  I can't wait to eat my next sandwich.

to hear this! Vegetable shortening is most likely a healthier alternative (as was in Bill Middeke's recipe). And we don't want to tempt your cardiologist to use any other weapon than his EKG on you.

Let me just tell you how this has gone over.  My bread baking has been pretty much confined to 100% whole wheat.  I've never really attempted a rye before.  But when this Irish kid from South Boston saw a recipe with stout, I knew I had to try it.  (I used Guiness, of course.)  I kept one loaf for myself and dropped off the other to my friend Mike, along with a batch of my whole wheat bagels, which I usually deliver to him every other week.  That night, the phone rang at 9:45 PM.  Of course my first thought was, "who died?"  It was Mike, who struggled to say hello with a mouthful of bread.  He said, "make more of this right now before I run out!"  He relayed that he had come home from work late, found the bread on his porch where I left it and only had tuna salad in the fridge so made himself a sandwich and was in heaven.  The next day, his mother called me.  (He had brought her a sandwich made with it.)  She told me she now hated me, because she could never buy super market bread again.

So it looks like this recipe has surpassed my normal whole wheat sandwich bread.  You've caused quite a ripple effect here in Boston.