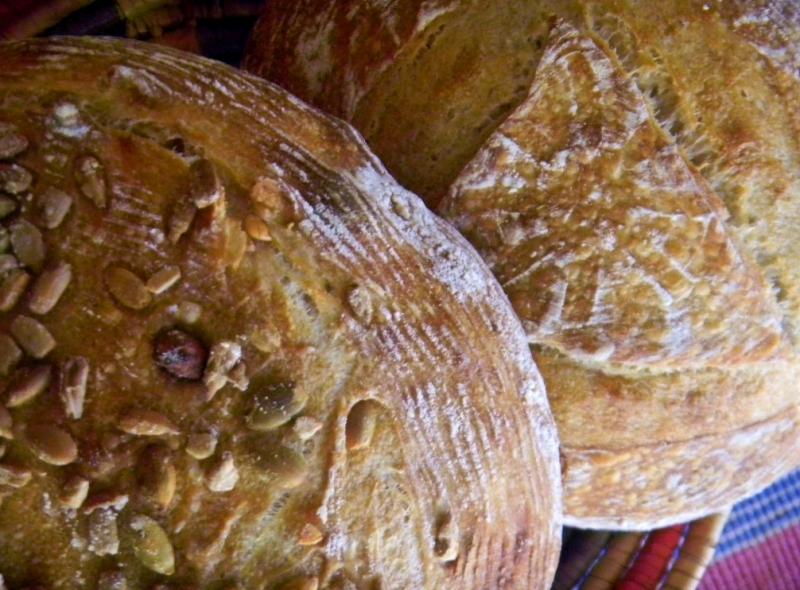 This is about as fool proof, something we need around here, SD bread imaginable that only takes 7 g of starter and 24 hours of basically doing nothing.  No retard, no levain building, no refrigerator required. 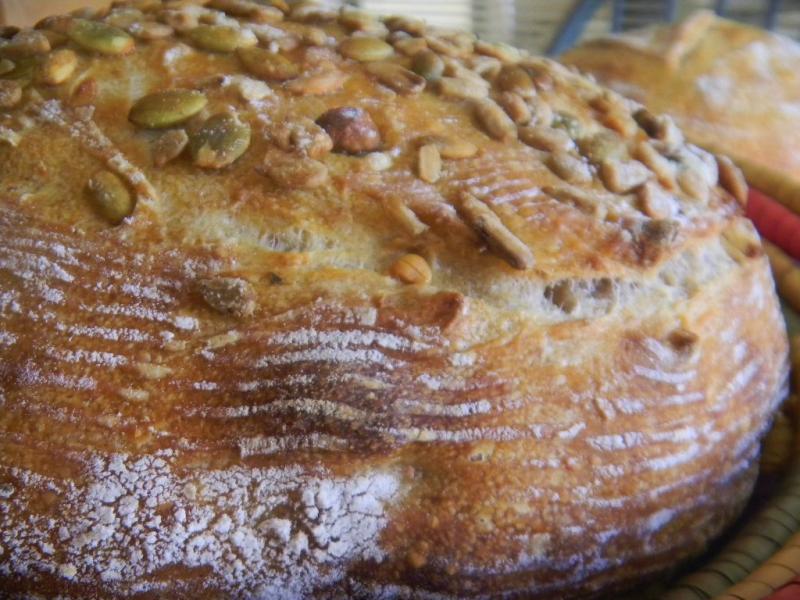 Just take7g of starter, mix it with 66 g of whole grains, I used equal amounts of spelt, rye and ww.  Add 2g each of red and white malts made from the same grains, 315 g each of AP and bread flour with 72% hydration (505) g of water.  Once mixed let it sit for 30 minutes to autolyse, add 11 g of salt and do 15 minutes of French slap and folds. Once done let it sit in a plastic covered oiled bowl on the counter for 20 hours until it doubles. 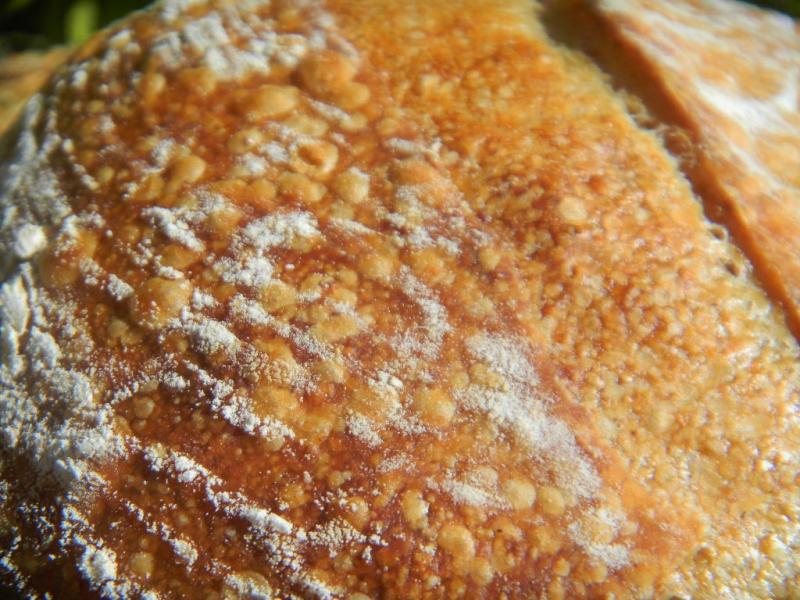 The split it in half and shape one into a SFSD boule  to see how tasty and sour this bread is and make the other one into what ever you want.  I put (2) kinds of figs, some pistachio nuts and some sunflower and pumpkin seeds in the mix and shaped it into an oval SD seeded Fig and Pistachio boule. 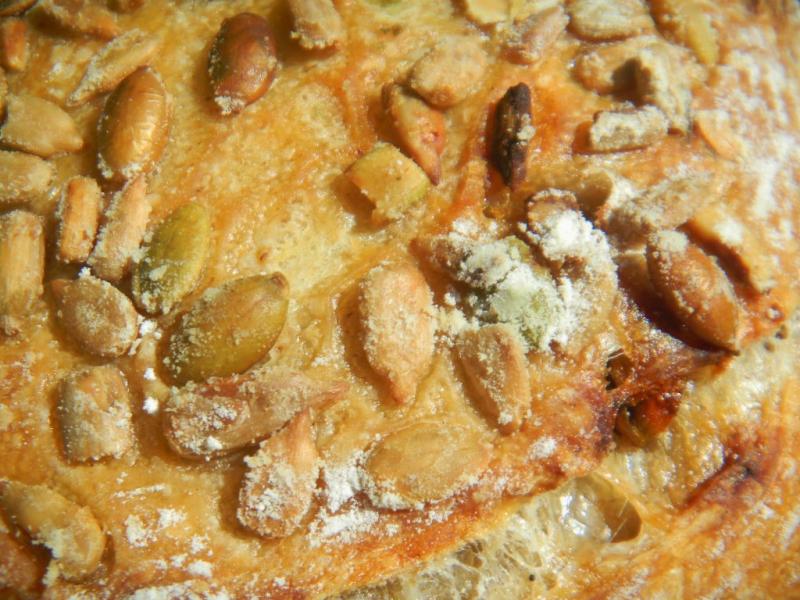 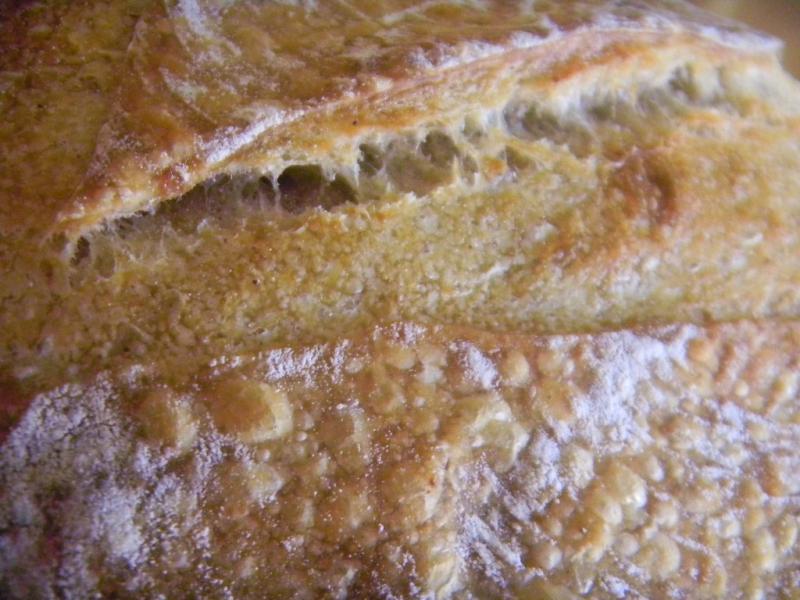 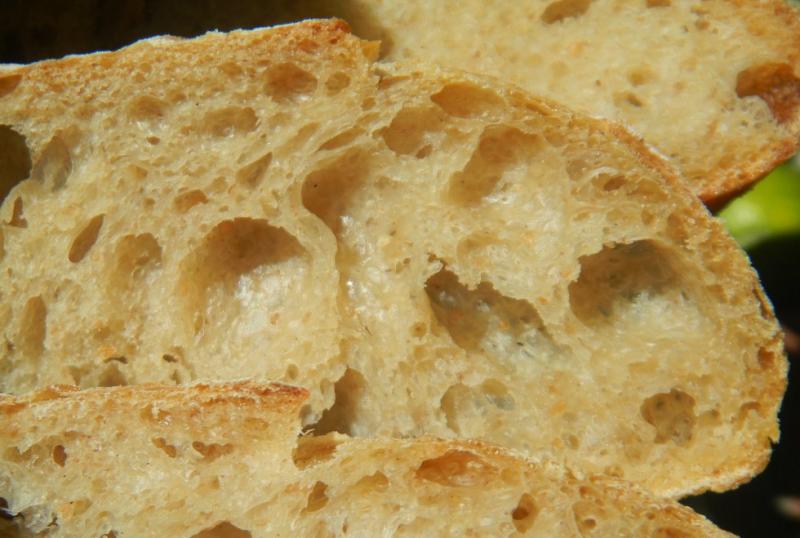 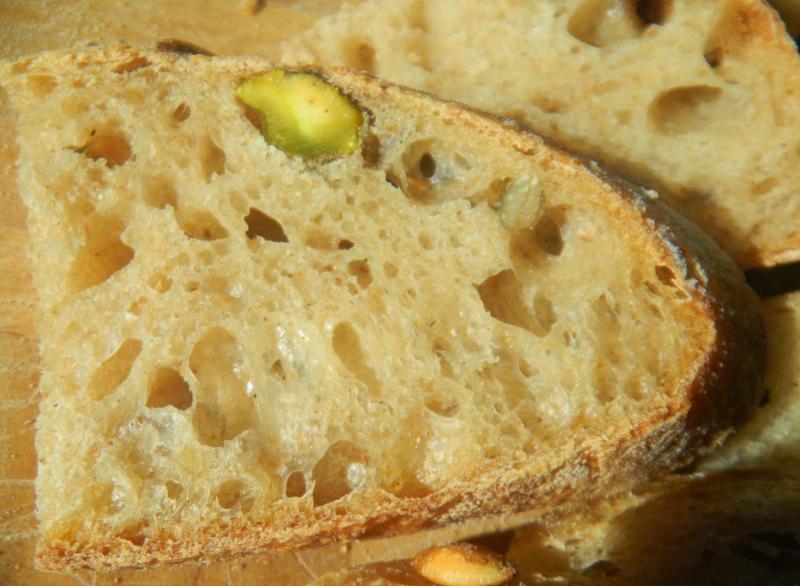 I had thrown some of the seeds into the bottom of the oval basket before the dough went in so when the seeded bread was un- molded I slashed 2 crescent moon shapes on the top where the seeds stopped, about 1/3 the way down from the top.  I cut a triangle on the top of the none seeded boule 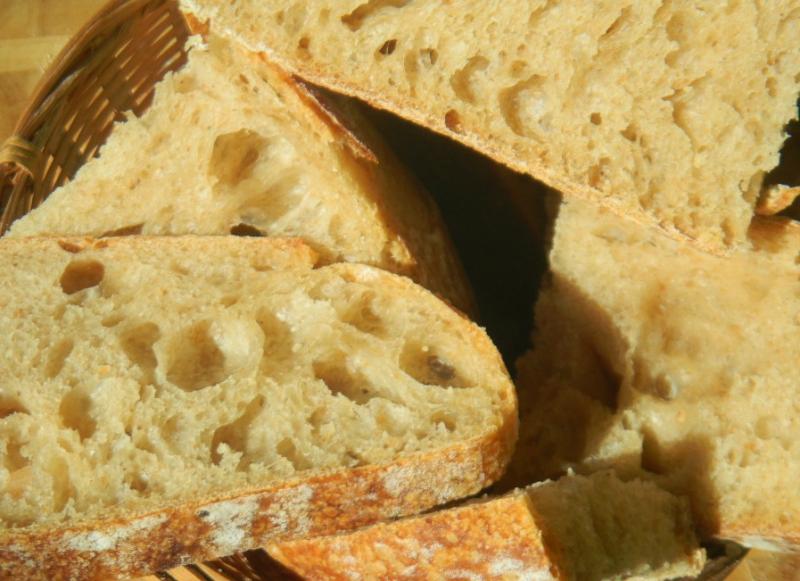 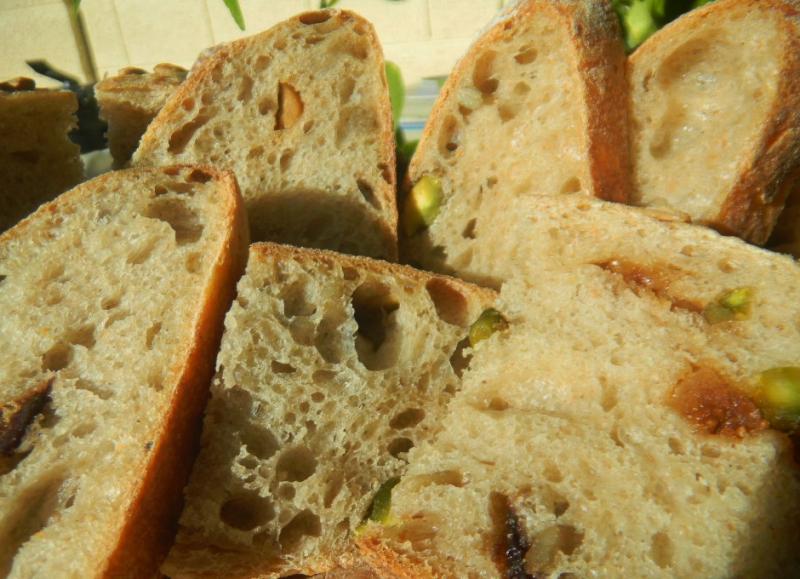 They steamed for 12 minutes and then the steam was removed, the oven was turned down to 425 F convection and the breads baked together for another 10 minutes.  Each was rotated 180 degrees on the stone after 5 minutes. 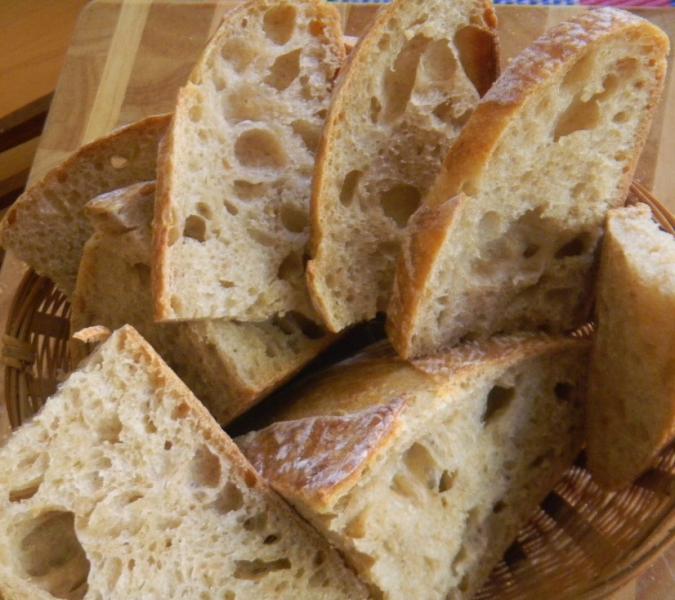 At the 22 total minute mark each bread read 208 F and my apprentice deemed them done with a wag of her tail.   We left them on the stone for another 10 minutes with oven off and the door ajar 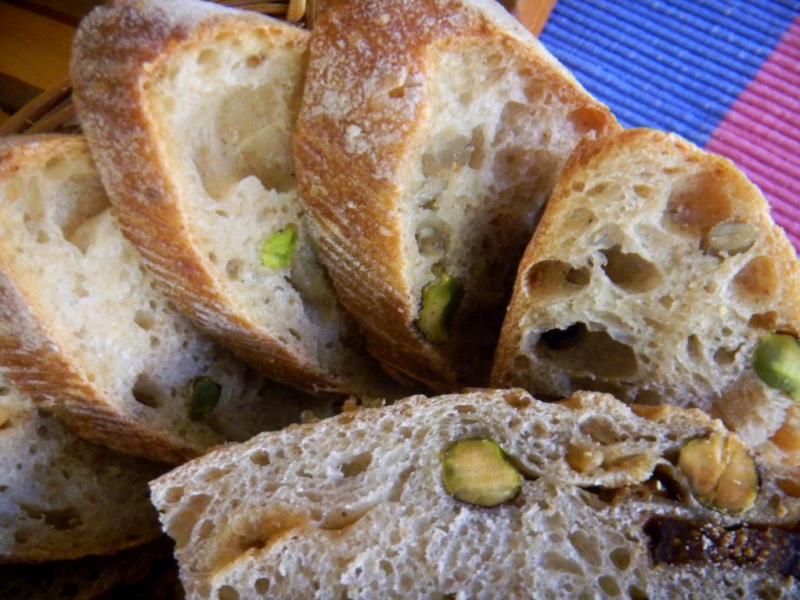 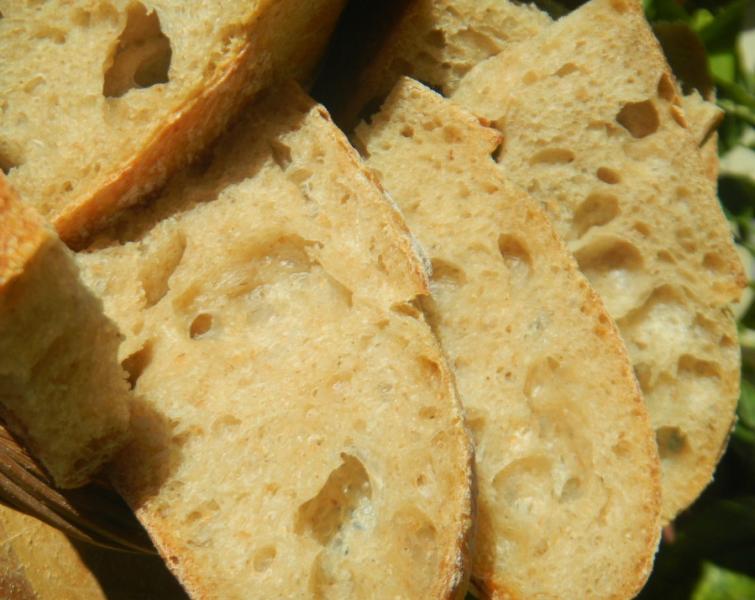 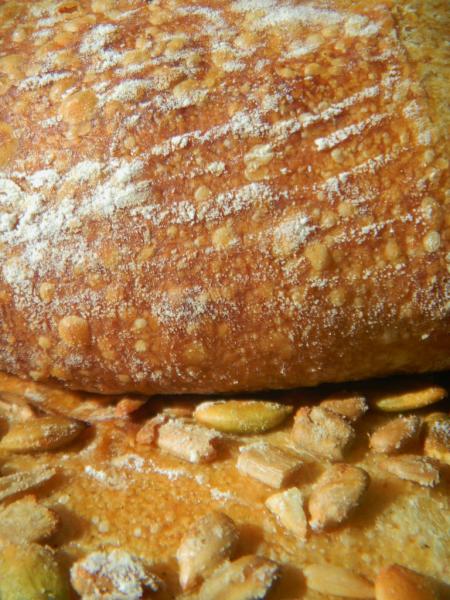 Both were nicely sour and we expect them to get more pucker going by tomorrow.  If I had to pick my favorite of the two, I would go for the fig bread this time.  It may not be as easy as no-knead but if you are looking for an easy way to make decent SDSF this is it. 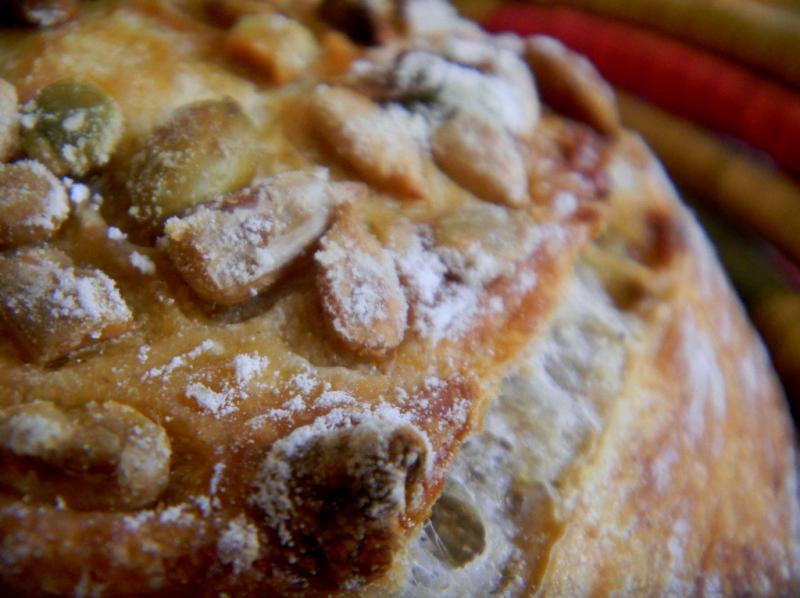 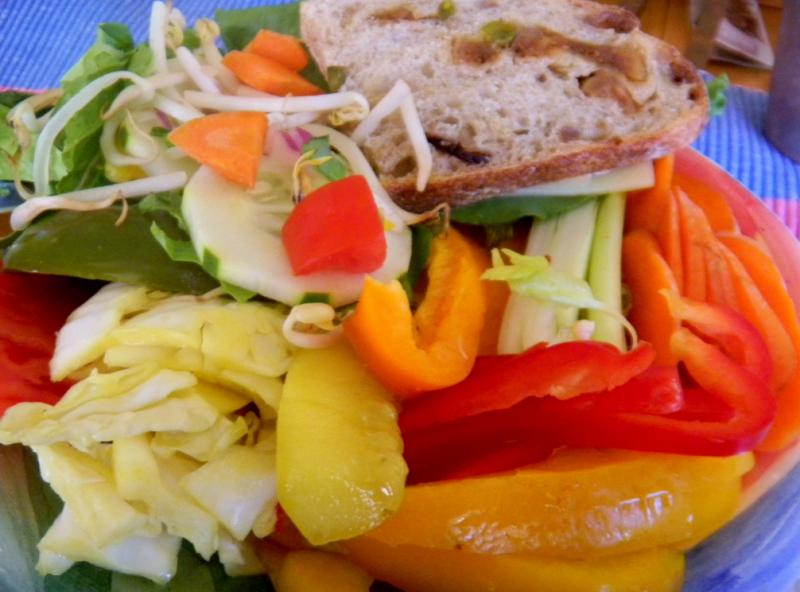 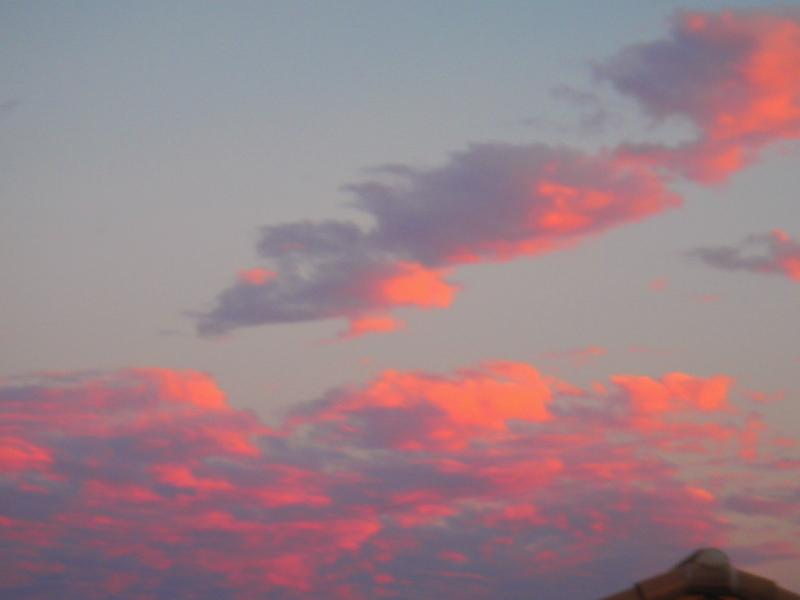 The crust and crumb of each is spectacular!

I was surprised how nicely sour these breads were right out of the oven.  1% starter and 20 hours on the counter before shaping really works well for sour development.   Forgot to put the anise seeds in the seeded variety and that would have been a good touch.

Both are very nice SD breads and one is more festive for Holiday baking too!

...w/ or w/o 'stacios - but they must provide nice little flavor bursts in there.  Airy crumbs, hypnotic wavy dust-lines from your basketton, textbook crust gelation blisters.  Nice bake!  Creative process -- a keeper for sure.  Apprentice must have got a workout during that 15 min of FS&F.  Ain't no no-knead, that's fsure!  Gotta be sour after 20h BF.  But with such a low inoculum to begin with, maybe not so.

are tasty but it the figs that make that bread special.  It was as sour a bread as I have managed to make with such a 4 pawed apprentice!  Ian experimented with and still uses big amounts of SD levain in his bakes to bring out the sour and I thought I would try the opposite.  I didn't put in a sunset but have one picked out to go with today's lunch shot.  A slice of each for this sandwich.

I'm really getting into the French side of Slap and folds since I've been in training for Michael Wilson's Holiday Panettone.  I'm hoping that it won't be 40 minutes of them like his 100% spelt and 100% hydro bread was :-)

Glad you like the bread and thanks for the comments Tom.  What have you been baking?

I'm intrigued by your procedure. I'll have to try it.

going over dough.doc's spreadsheet for lab1 and 2 and yeast over time vs temperature which tries to predict how long it will take for volume to double for bread based on temperatures.  The other thing it shows is the relationship between this ration and temperature and what temperature one might want or need to get a higher lab to yeast ratio.  The higher the ratio the more sour should come out.

Oddly, between 68 F and 80 F the lab to yeast ratio is around 1 where they are working at equal rates so sour will not be pronounced when the dough doubles in volume.  The science of bread is very interesting.

With your experimentation with SFSD and sour in general, you will have a great base to try this out and be able to compare the sour between the two methods - larger SD starter low temperature or small starter amount with higher temperature.  They should be the same sour when the volume doubles but I have no idea what amount of larger starter to use.   I'm guessing 161 g  (23 times more) for 700 g of flour at 72% hydration and keep it at  38 F for 20 hours?  That is a pretty wild guess that I'm guessing too :-)

Your method of low temp and long retard with a high temp final proof at 85 F seems like another good candidate to get sour too.   It was a fun experiment and I learned a lot thanks to Dough .Doc's spreadsheet help.

Glad you liked the bake David.  You will like the sour!

That is some very impressive baking!  Love the crumb and crusts!

your steam makes it all possible Sylvia ! These breads taste great too - if you like sour.   Glad you liked the output, my apprentice will be proud :-)

Looks like you got a great open crumb on this one and a nice well developed crust.  Very nice bake DA.  Beautiful photos too!

Nothing like waiting around for dough to rise on the counter :-)  The next 2 days the sour went even more sour.  Very nice bread that reminds me of SF very much.  Glad you liked the photos too.  Good bread is way, way easier to photograph :-)  This is another way to make good bread.

Bake on my friend!

And great results, DA! Science of bread is truly fascinating.

as AZ and since it has cooled down some for youtoo, you could crank this recipe out on your counter and see how it compares to your normal method for bringing out the sour.  I've always liked science, especially chemistry and physics.   Dough.docs spreadsheet especially useful.  It is amazing what TFL folks know and share about bread or discover about bread!  I guess that is what TFL is all about.

It is still in the low 90's here but Happy Winter Baking to you anyhow :-)

the 1 g was for the previous levain experiment where I used 1 g for 100g of flour and it took 20 hours to double.  In this the ratio was the same 7 g of starter and 700g of flour if you include the 4 g or malt which is nothing more than sprouted flour.  Thanks for the catch - I will fix the text.