It sounds like an interesting experiment to do for SD starter. I can use up to 20g of stater making 200 g of 80% hydration levain over 12 hours in the winter time and kitchen temperatures around 60-65 F. That 200 g levain would normally go into 800 g of flour and 600 g of water and then developed over a couple of hours. In the winter time it could possibly ferment and proof 6-8 hours on the counter before needing to go in the oven.  With yeast water we have gone 12 hours.

I suppose that if one would use 1 g of SD starter and mix it with the entire 900 g of flour and 675 g of water and 2% salt (no levain build) it would take a while for it to be ready to bake, How long we will have to find out - unless someone has already done this test. I'm not sure, perhaps someone here knows this too, but yeast only lives about 6 days or so before croaking. 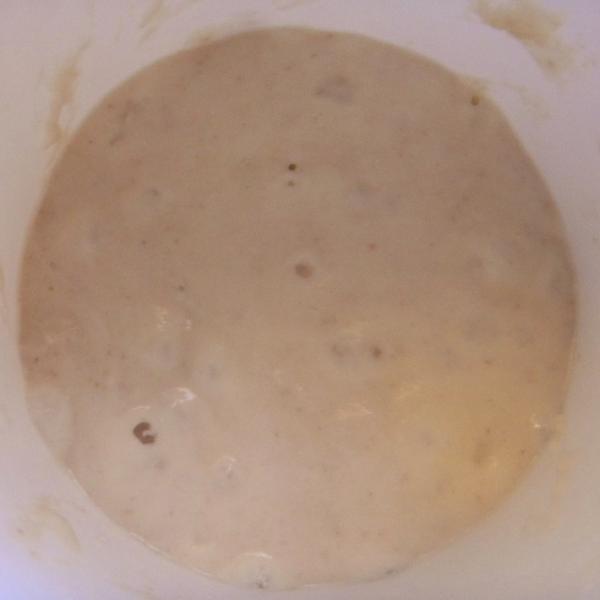 No collapse after 24 hours,

So my apprentice took 1 g of starter and tried it out on 100 g of flour and 75 g of water, 2 g of salt to see what happens. She started at 9 AM, Oct 26, 68.2 F kitchen temp and level marked with a rubber band. Lets see how long it takes to double and make a couple knotted rolls out of it :-) Here is a pix exactly 24 hours later the levain had nearly tripled but had not collapsed. Amazing for 1 g of starter and 100 g of flour. 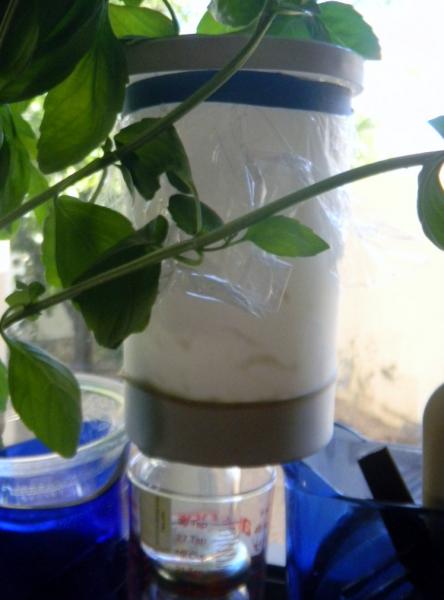 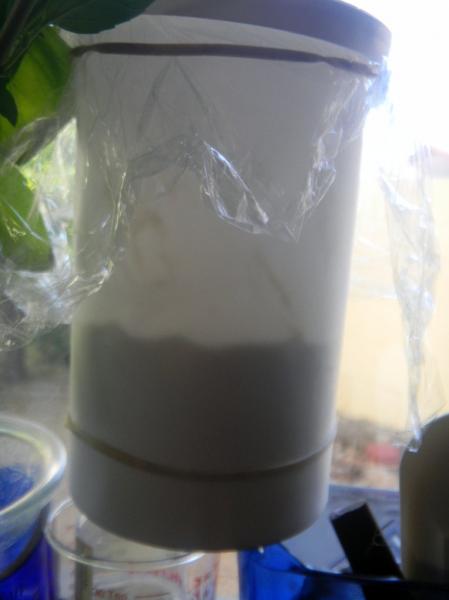 Here is a picture of the top of the levain too. I've decided to eventually make some bagels out of some of this and a lower hydration will slow this train down some too. Also want to get some whole grains in the mix too. So we will divide the dough in half and add another 86 g of flour, 44 g of water to get the hydration down to 60% from 75% and a little less than 2 g of salt to each half.  One half got 86 g of whole grain flours (50%rye, 32% WW and 18% spelt).  The other half got 86 g of AP and 44 g of water and less than 2 g of salt - to keep the control of white flour intact. 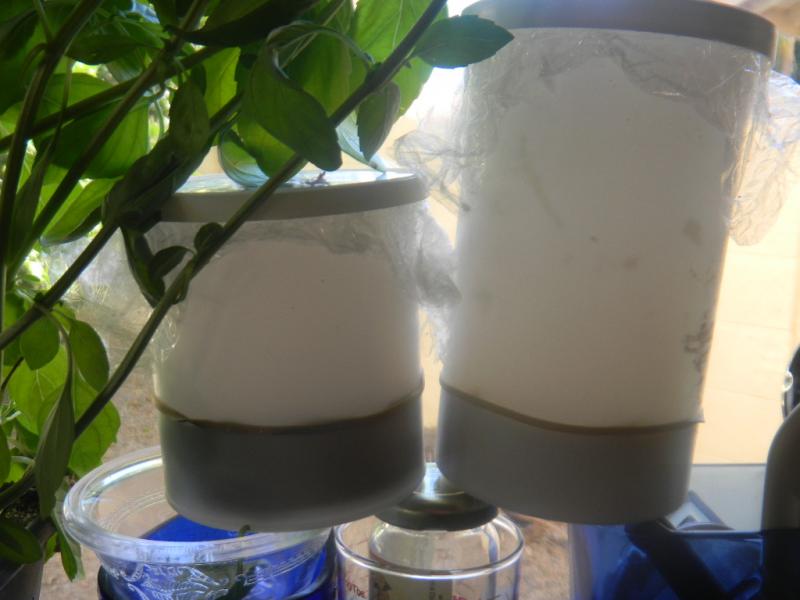 10 AM - Oct 27 after the 24 hour mark split into two levains one has some Whole Grains now and one is still AP only.

This should perhaps get us from 24 to 48 hours on the counter. The temperature fell to 70 F this morning from a high yesterday of 81 F in the afternoon fall kitchen. 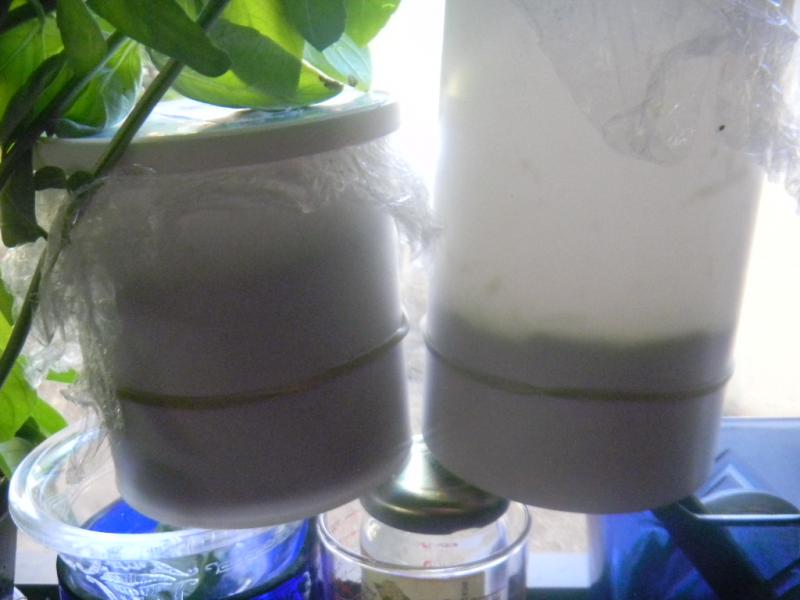 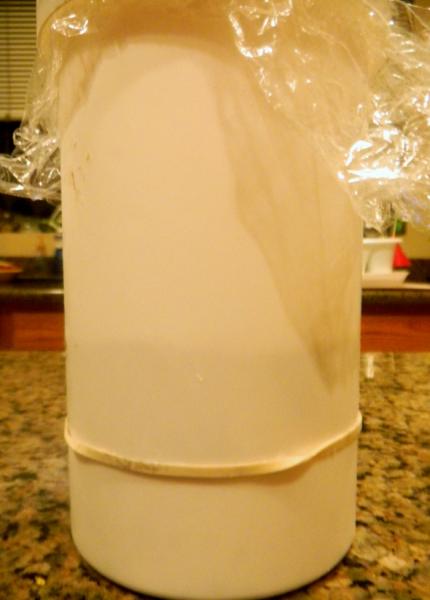 Now that we know it takes 24 hours for our 1g of our Desem /Rye SD starter  tpo double 100g of flour at 75% hydration, we are going to extend the experiment to see if we can do a 36 hour bread on the counter top.

We mixed 7 g of 67% hydro starter with 50 g of water to thin it out and liquefy it.  We then added 22 g each of home ground whole: spelt,  rye and wheat along with 2 g each of white and red malts made from the same flours and mixed it up well.  We then added another  455 g of water and mixed again before adding 315 g each of bread and AP flour and mixing again.  This gave us a 72% hydration dough that has 10% whole grains and 1% SD starter. 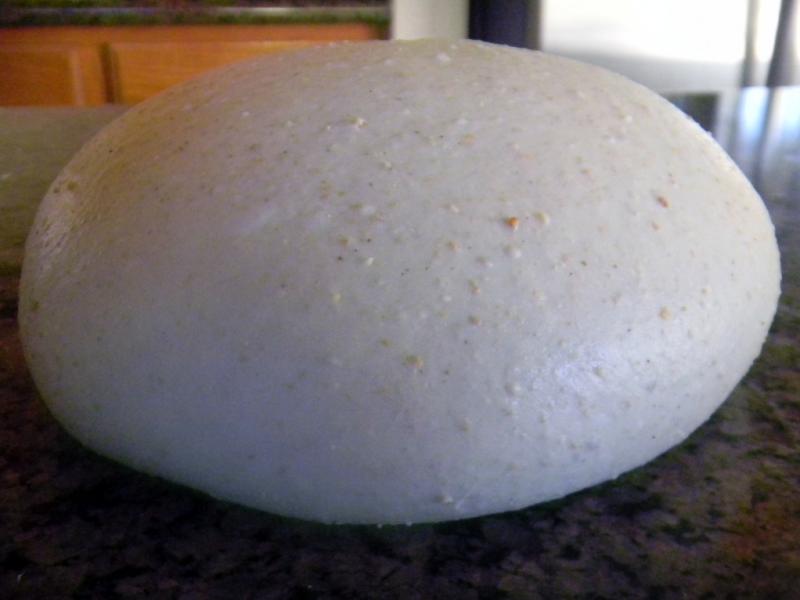 Michael Wilson has had a positive effect on my dough balls!  Can't wait to try out his panettone ! 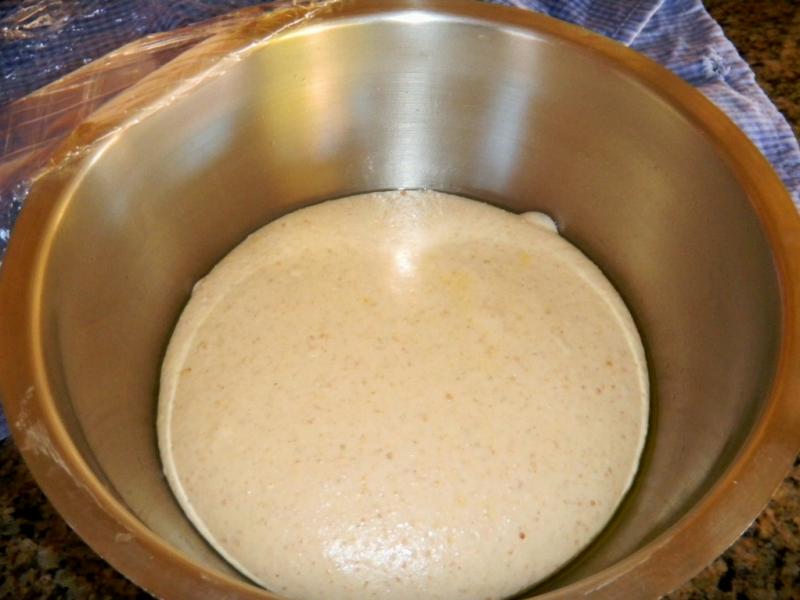 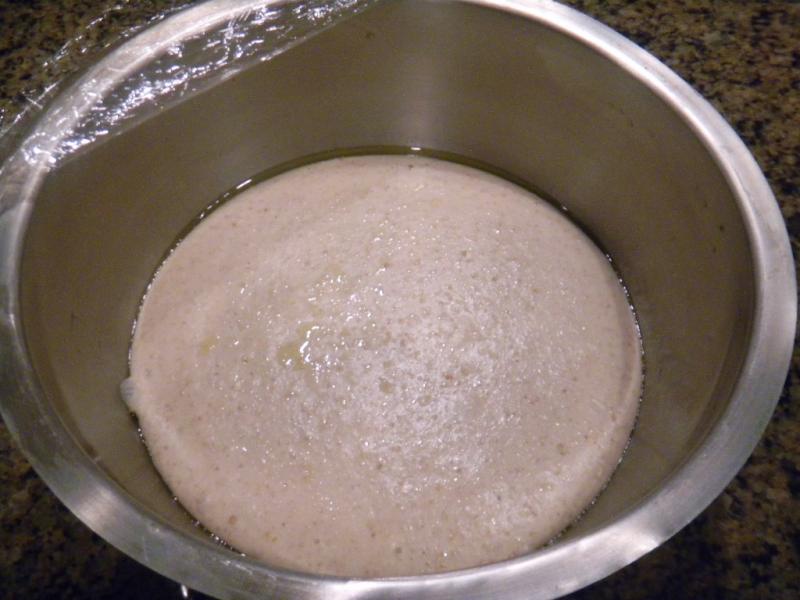 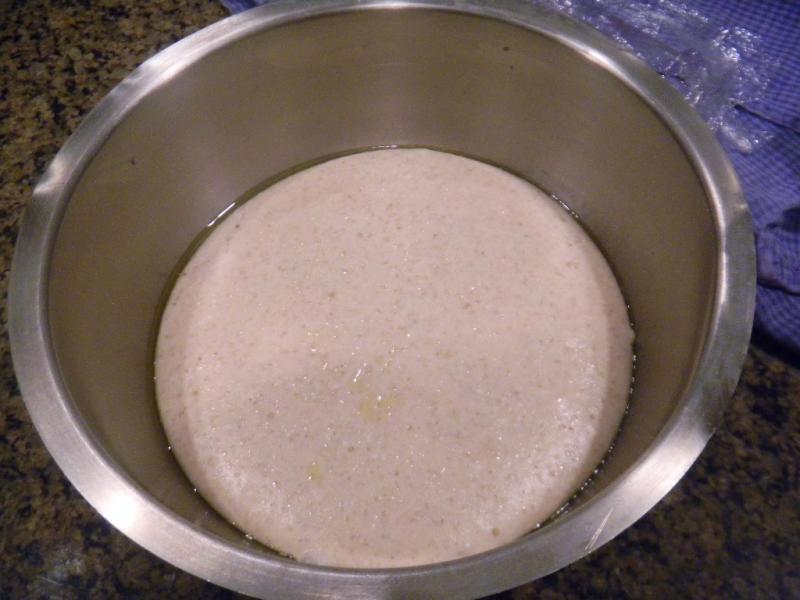 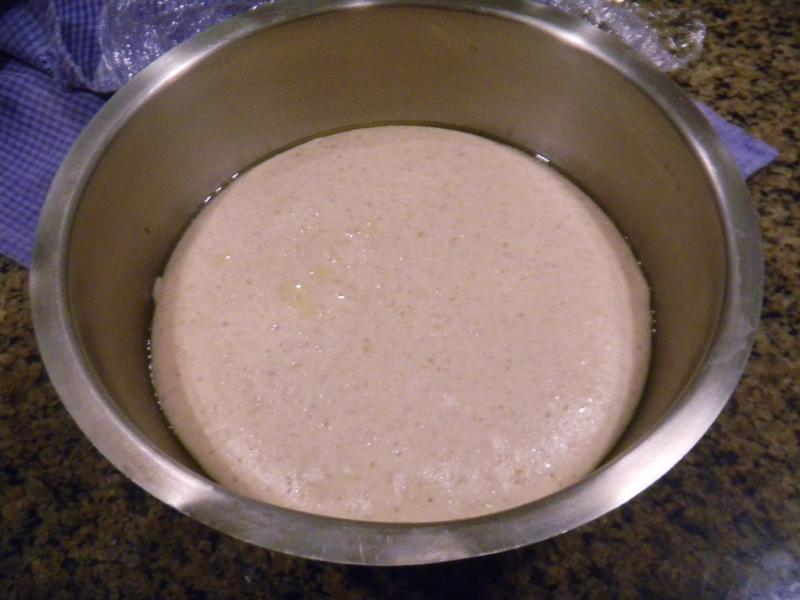 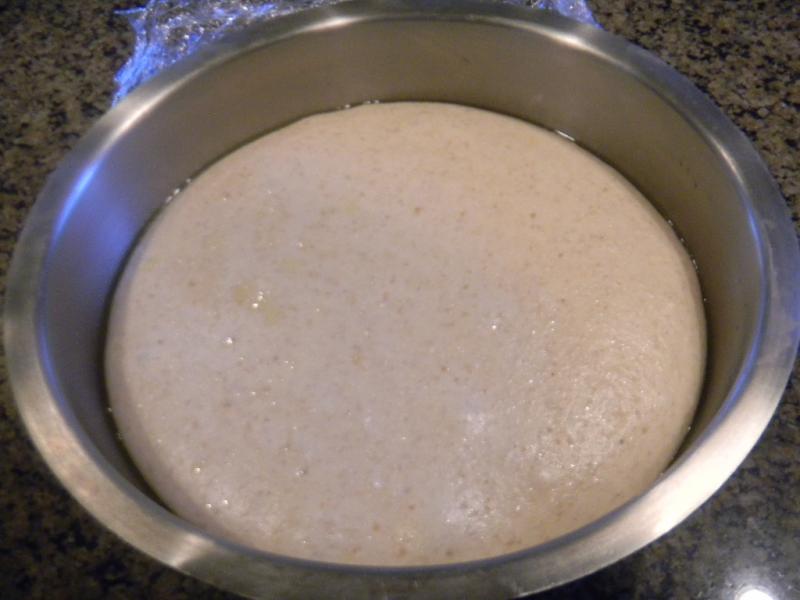 It only took 20 hours to double in volume starting with 1% starter to flour ratio.  Time to split it up and and proof a loaf of fig, pistachio, sunflower and pumpkin seed bread and one plain old SFSF - and see how long they take to double.  The round is SFSD. 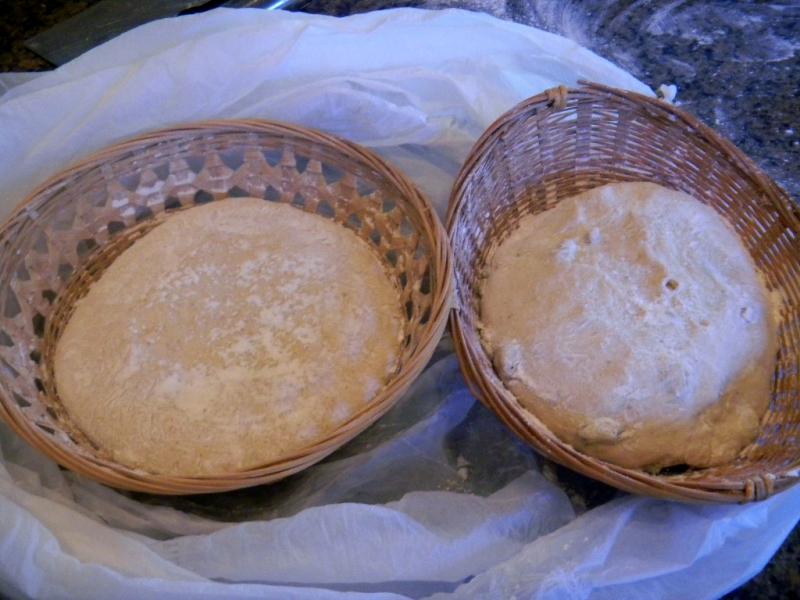 The reality was that the dough had doubled again in 4 hours and was ready for Big Old Betsy to bake up so we did.  At our hot kitchen temp of nearly 79 F  Doc.Dough spreadsheet said we would ne ready to bake in less time but we might have over proofed it a little too. 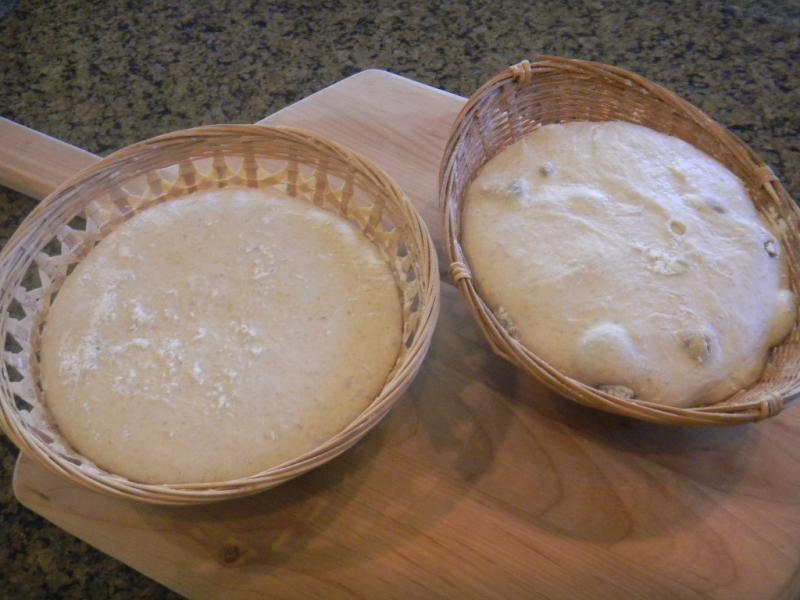 Here they are proofed.  24 hours on the counter from mixing the dough to baking it off worked for this starter, flour and hydration combination.

I will do another post to cover the bread itself which baked up very well.

Few days ago I prepared a loaf with 60% durum wheat and 40% soft wheat flour, both quite poor in gluten. I made the dough proof 24 hours because out of town and because I wanted to see how long it would last. In the oven it even sprang a bit, but not much.

In my opinion the only factor that determines how long your dough can proof is its gluten structure, that in turn depends on how much you knead it and how extensible and elastic your gluten is. It took me a while to understand the importance and the effects of the extensive kneading that txfarmer and mwilson have shown us countles times, but that I've taken the concept... I'm getting great loaves even with weaker flours:-)

has me doing long French slap and folds ever since I tried to do his 100% white spelt 100% hydration but using 100% whole spelt instead (sifting it to 78% extraction and then adding the bran back into the mix with a last S & F). Also tried it out on 100% Kamut too.  He has me believing in good gluten development.  I'm in training to do one of his panettone's for the Holidays :-)

I don't know how much gluten structure I got with these levian's by just mixing them with a spoon for a short time and letting them go on the counter for 24 hours but they could have gone longer before I  split it, feed it and let it go 12 hours longer after some kneading.

I used to think that bread would turn to goo if you let it proof for 24 hours on the counter but I'm beginning to think that if a very small amount of starter was used, say 8 g for a 800 g loaf at 72% hydration and the gluten was developed enough, a loaf should be able to go 24 hours on the counter if the temperature was around 72 F  and still bake off nicely as you have already found out with your durum bread.

I'm going to give it a try right now.

It is different for LAB (35 hrs) than for the yeast (37 hrs).  And at the very high dilution ratio you should add one additional doubling time (~4 hrs @ 20°C) to Ganzle's model results to account for a longer lag phase, but your 24 hr photo looks like it has another few hours to go so 36 hrs is probably pretty close.  With such long times, the temperature sensitivity is quite high as well so predicting exact times is not as easy as you might like.  Just use it when it is ripe.

of your hand Doc!   I agree. I'm pretty sure than the first 24 hour phase could have been extended to 36 hours like you suggest.    Without a proofer it is hard to control the kitchen temperature in the fall with the A/C off  and 68 compared to 80 F is a  huge swing and the little beasts react fast to even more modest temperature swings.

I'm going to try a 36 hour test using 8 g of starter and 800 g of flour and see what happens over the next couple of days.  It would be so much easier to leave shaped bread on the counter rather than retarding it ans still get that SD tang.

Thirty six hours is an inconvenient time to either start or complete any operation.  Maybe 0700 one day to 1900 the next day is as good as you can make it (or 1900 to 0700, depending on how much work comes after the end point).  Better to adjust the ratio if you can't control the temperature.

I built an Excel model from Ganzel's dissertation results and it has provided exceptionally good guidance for times and temperatures.  I suppose you could integrate it over the fermentation time using measured temperatures, but I am not sure it is worth the effort.

find your Excel spreadsheet?  I saw the 36 hours was going to work after finishing the Slap and Folds at 11 AM.   That would have me finishing up the bake at midnight.  So I decided to do an 8-12 hour 37 F retard in the fridge, right after we put it in the basket for final proof.  That way we can finish it up at a decent time in the morning - but it becomes a 44 hour bread then :-)

Set the temperature (°C) in cell B62; read the elapsed time (hrs) in column A; read how much LAB (column C) and yeast (column E) you have relative to how much you started with.  This does not add the one doubling time allowance for the lag phase delay. To find the doubling time, look down the appropriate column (C or E) and find a number close to 2, then look in column A to get the doubling time.

There is more functionality but I don't have time to write the instruction manual.  You will have to tease out the details.  Nothing is locked so you can change it as much as you want (in your version).

I will leave it up for a few days.

It is an interesting experiment and your spreadsheet should be fun too!