After coming across this post here at TFL while looking for something else, I thought I'd give baking with spent grains a try.

We have a local microbrewery - Sleeping Giant Brewing Company - here where I live, so I brashly e-mailed the brew-meister asking if I could take some spent grain off his hands to experiment with in exchange for bread.  He quickly agreed.  I picked up a small pail of spent grain from a batch of Skull Rock Stout, and bought some of the stout, to use for a locally-sourced whole-wheat spent-grain bread.

My local flour is Brule Creek Farms, grown and stone ground less than 20 minutes drive from here (I pick mine up at the weekly farmer's market).  I used 75% whole wheat and 25% partially sifted in my test formula.

I also used some locally-sourced honey I picked up at the farmer's market in the mix.

So, based on this formula, we're talking a 98.3% local product by end weight (only salt and yeast was non-local).

I was thinking about using all stout as the liquid component, but when I tasted the rich, dense, almost chocolately brew, I decided to be a touch conservative for the first test batch and go 1/2 stout, 1/2 water.  I used all the stout for the soaker, and all the water for the biga.

Also, the yeast looked a touch too much for even whole grain bread, so I used a bit less - maybe closer to 0.8-1 %, and extended the fermenting times a bit.  I prepared the soaker Thursday night (sitting in the fridge ~10C/50F), the biga Friday night (again, in the fridge), and assembled/baked Saturday morning/afternoon.   A couple of things jumped out at me prior to baking:

1)  the dough (which I mixed by hand) was LOADS softer, looser and more pliable, especially after a brief autolyse while I quickly did the dishes, than other +70% whole wheats I usually do using a straight dough process.

2)  THE AROMA!  There were hints of meat and chocolate in the mix, but the closest I could come to with a description of the overall smell was "Marmite light" - zesty, Marmite-y, with anchovy undertones, but without the tang of the Marmite.  Am I making sense?  This led me to expect great things!

Since I had to drive out of town to pick up some things, I fermented the mixed dough in the fridge for ~2 hours, and then at room temp until it doubled - total:  ~3 hours.  I then shaped & proofed at room temp (18C/64F) for about an hour, then into the oven for a total of 60 minutes until the internal temp was 93C/200F.

Here's what the loaves looked like (excuse the "Soviet satellite photo" quality, but my better half has the good cam for doing research overseas for the next few weeks): 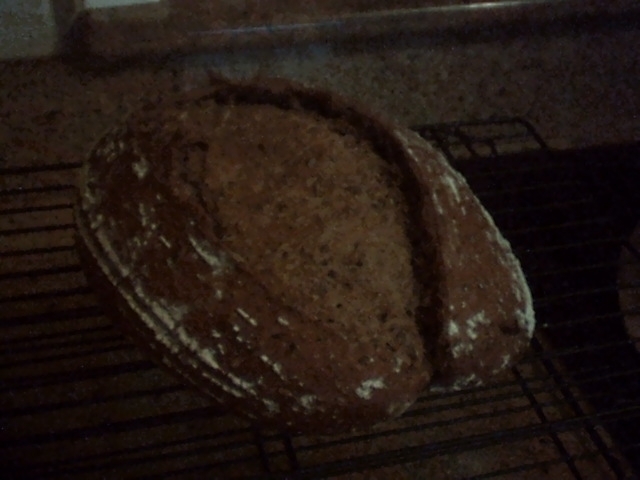 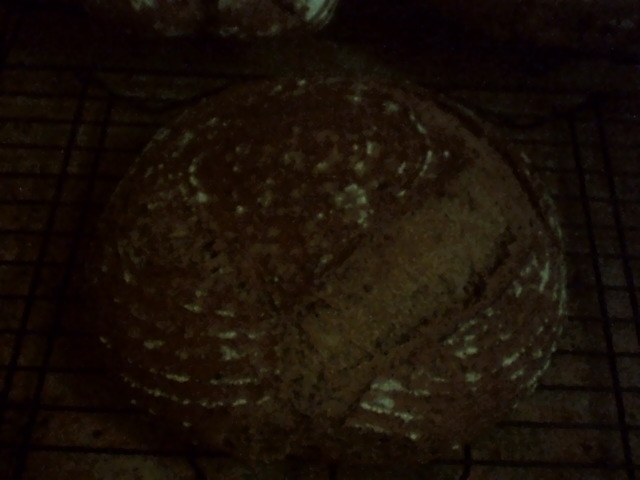 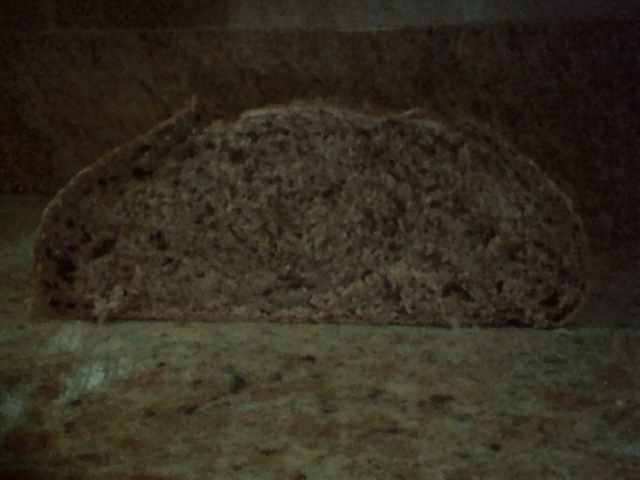 This is by far the softest, moistest whole wheat I've ever made.  The smell?  Nice and rich without smelling beery.

The taste?  Here's my surprise:  I was hoping for rich, wheaty, umami flavours, but it was actually a touch bland.  My first question to myself:  could I have used a touch more salt?   Was there something in the process I mucked up/changed toooooo much?

I'm going to taste some more later today to see if it's just my tastebuds that need to wake up a bit (it's going on 9am here, and I've been up a couple of hours), but any input/insights on this would be VERY greatly appreciated.  I don't mind going through all the steps, but I was hoping for a lot more of a flavour zap than I got.

Perhaps a touch more salt (2%) given the brewing process extracted most of the malt sugars?

This awesome looking loaf would likely benefit from a long slow overnight ferment using a poolish rather than instant yeast.  That process certainly develops more flavor than for yeast based breads, moreso when the recipe includes whole wheat and other whole grains.

Impressive looking and as you say moist.  Kudos to you for the local approach...  Impressive!!

I agree with Nick that a bit more salt would certainly help.

I also think using a sourdough starter would really bring out the flavor of the spent grains and an overnight retardation would also help.

Nice experiment.  I look forward to hearing about your future attempts to see if you get the flavor you are looking for.

I also agree with Nick that adding some rye into the mix will add more flavor especially if you decide to do a sourdough version.

I NEVER thought of how the brewing process may have changed the flavour I was expecting from the spent grain (although I was hoping more for fibre/texture from the grain than flavour).

Speaking of flavour, I tried some more a moment ago.  It's still lovely moist (but not undercooked doughy), but I'm getting more of a chocolate aftertaste.  VERY subtle, and still good to eat (wonder what it'll be like toasted???), but not as rich as I'd hoped.

I was thinking of a poolish instead of a biga, but thought I'd follow the recipe closer the first time I tried it.  I'm still not brave enough to try a sourdough, so I'll keep at it with instant yeast.

As for adding rye, my local supplier also has a stone-ground rye that's given me very nice bread - maybe a touch of that as well next time (say, 75% whole wheat, 15% partially-sifted, 10% rye).

One more element - I may add a bit more beer overall (maybe 25% total liquid as water, 75% as stout) to see if that cranks up the flavour a bit.

A touch of rye, a touch more salt, poolish instead of biga, maybe mo' beer and loooonger, slower ferment - all great ideas to try.  Stay tuned....

Thanks again, Nick & Ian, for the ideas.

for you is to get away from yeast and go the natural starter route.  You've already surpassed 99% of bakers with what you've done!  In hindsight you will find mastering a starter culture is really easy and feeding once a week works just fine.  Build it a day or two before you bake, try 100% rye for best results (100% hydration).  You will find the flavor, keeping qualities, and digestibility to be improved over yeast.  But you know all of this.  Search box above has tons of posts as do many of the best books.  So if you feel inclined to take it another step forward, you will look back with no regrets!!

Once you go the SD route you will never look back.  If you don't want to make your own you can probably find someone in your area that would happily share with you.

Well, now that a couple of days have passed, with typical storage (cut side down on wooden cutting board in kitchen @ room temp), I'm starting to get subtle malty-almost-Marmite flavour.  Crust good, crumb still the moistest of any 100% whole wheat I've made, and the very subtle flavour is growing on me.

Still, will have to try some variations down the road.

.... with the following changes:

1)  am trying a poolish instead of a biga;

2)  using beer in the poolish instead of the biga for a change of pace; and

More, as it gets done.