I might be a little addicted to sourdough. It takes a long time for the bulk fermentation, but it's really great knowing that I made this bread completely from scratch. Next I'll need to buy a mill and start making my own flour. Slippery sloap this bread making is.

The toast is so amazing. It would make an absolutely great grilled cheese....mmmm caramelized onions, cheese and russian dressing. Oh my.

Next time I'll have to buy a real pain de mie loaf and do it like the professionals. 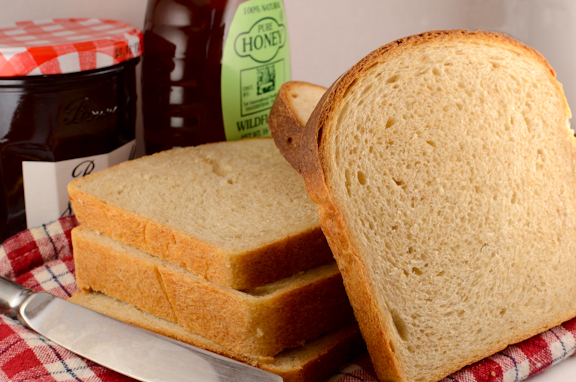 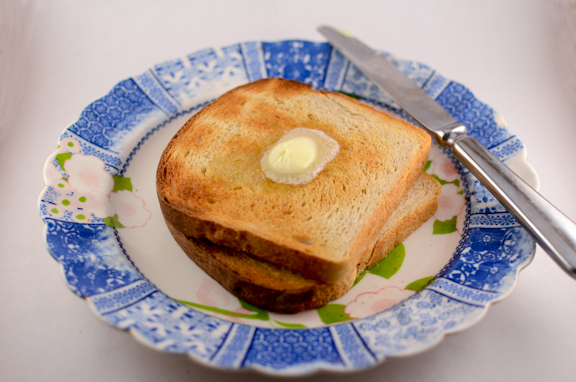 everyday slimy white slice!  What a great white sandwich SD bread.  I'm thinking you need to put some KCMO pulled BBQ pork on that baby! Mr. Bryant would have easily switched to this from Wonder Bread!

Any chance of detailing your recipe..?

Absolutely. It's on my blog.

Ill post it up on this forum when I get home.

I used thirty percent of the total flour weight for the starter amount. I figured the butter is a fat which counteracts the acid in the starter and I want the dough to rise slightly faster than my pain au levain. If I had time I would have built a liquid start at 125-150 percent hydration to increase the yeast activity. I used a 100 percent hydration starter for this recipe.

*Disclaimer* I actually ran out of bread flour 350g short of the recipe amount. I added 200g of King Arthur AP Flour and 150g of rye flour. The flavor is absolutely excellent and I didn’t need to adjust the hydration of the dough.

This recipe makes two 900g loaves. My bread tins are from Sur la Table and seem to hold more dough than most. If you would like to scale the recipe I made an excel spreadsheet that you can scale ingredients with. You can also replace the milk with milk powder and water if you follow the conversion on the milk powder box.

Start this bread by bringing the starter to room temperature. Add milk, or water and milk powder, to the starter and stir to dissolve. Add flour and sugar and stir until all the flour is hydrated. Give the dough a 15-20 minute autolyse.

Next, stir on low speed for about 2 minutes to develop the gluten further. The dough should be elastic and springy and the sugar should be fully dissolved. If you feel the grittiness of the sugar in the dough continue mixing.

The next step is to add softened butter. My mixer isn’t very large and it doesn’t have the torque to do this well enough, so I do it by hand. Turn the dough out onto an dry surface. Flatten the dough with your palms into a rectangle. Spread the softened butter evenly across the surface of the dough and fold the four sides in like an envelope. Flatten the envelope into a rectangle and fold again. Do this three or four times. If the dough starts to tear or butter squeezes out from the folds it’s fine.

Put the dough back in a mixer and mix on low speed for about 5 minutes or until it clears the sides of the bowl and the gluten is developed enough to create a windowpane.

Form the dough into a rough ball and put it back in the mixing bowl. Cover it, I use a trash bag around the bowl, and ferment until it’s doubled in size. This will probably take 4-5 hours at room temperature. If you don’t have time you can always add a pinch of instant yeast during mixing to help boost the process along, but that’s cheating!

After the dough doubles, turn it onto a dry surface and fold it one more time to even out the dough temperature and the yeast’s food. Cut the dough in half, two 900g portions, and gently preshape into a log shape. Let the dough bench rest covered for 10 minutes.

Finale shape into a loaf and place in a greased loaf pan. Ferment, or proof, covered for about 2 hours or until the dough clears the top of the loaf pan.

If you are baking inside of a pullman loaf pan bake at 425F for 50-60 minutes. If you are using a standard bread-pan, preheat the oven to 425 and immediately lower it to 350 after putting the bread in.

Try and check me out on YeastSpotting again.

I would think that loaf would make some interesting French toast. dry a few slices on the counter overnight, dip in a nice egg custard and drop in a cast iron pan with butter swimming in the bottom. (I think I just gained 3 pounds.)