It has been several year's since bagels were on the bake list.  We always made them sourdough but after seeing that Stan published his bagels on TFL, we had to give them a go for the 4th of July. 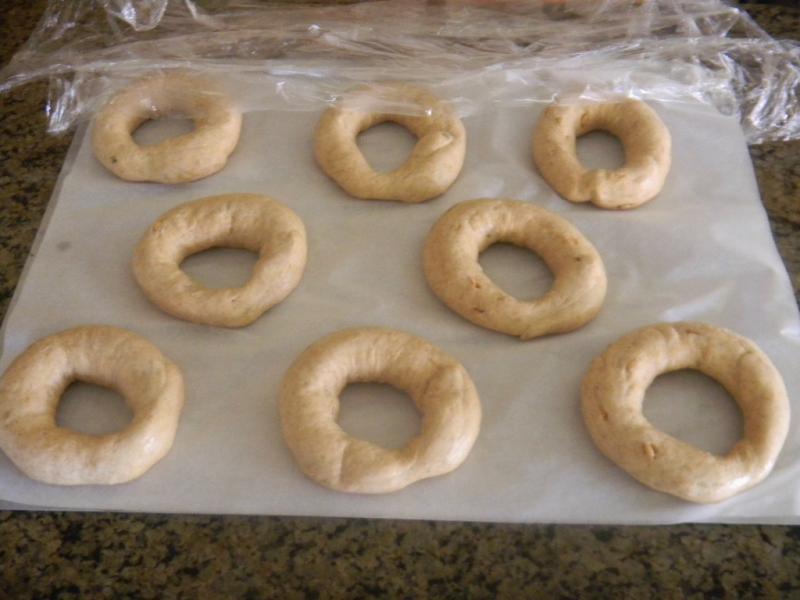 We used Stan's method but instead of using clear flour we used a host of multi-grain s and some sprouts.  The grains include dark rye, WW, Durum Atta, semolina, soft white wheat and Bread flour.  The starter was a sourdough and yeast water combo starter that had some Bulgar, AP and 6 grain cereal in it. 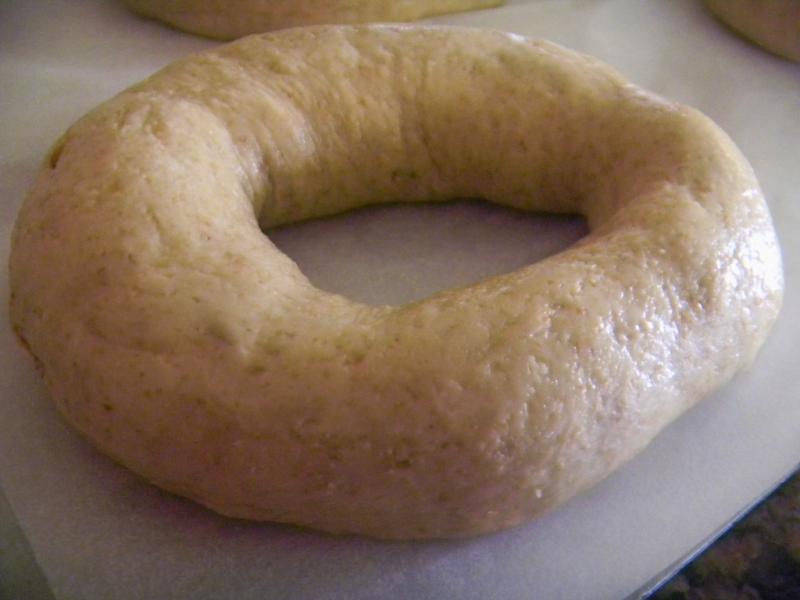 Since the whole grains were over 50%, much of it home ground, we upped Stan's hydration to 60% from 50% and hand kneaded it after mixing the levain with the dough and salt briefly in the KA .  We built the combo levain in 3 stages - first 2 stages were 4 hours each and the last stage 2 hours before being refrigerated overnight.   The YW was used to replace the commercial yeast in Stan's recipe. 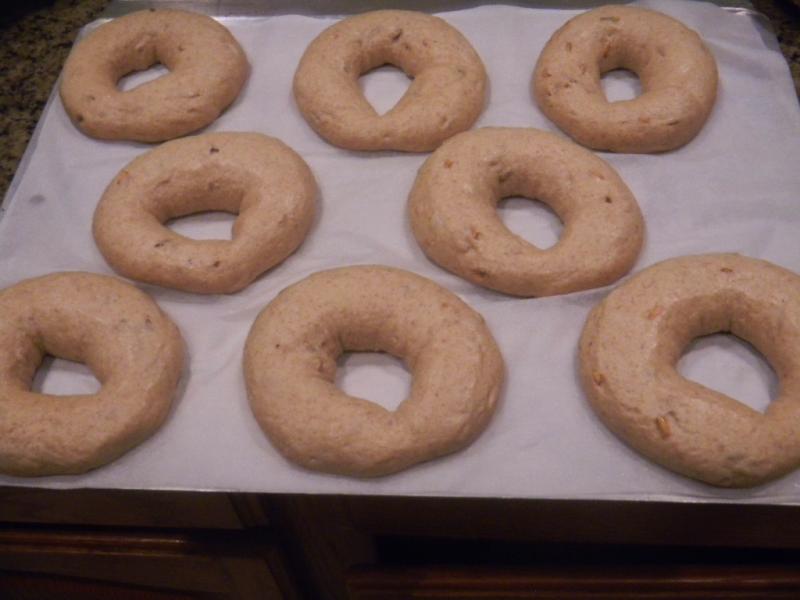 When the levain came out of the fridge the next day, we autolysed the flour with the dough for 2 hours as the starter warmed up.  We hand kneaded the dough for 10 minutes after mixing in the KA for 3 minutes.  The 25 g of sprouts were added at the very end of kneeding.  The dough was then rested for 15 minutes to relax it before forming the bagels over the knuckles and rolling the seam. 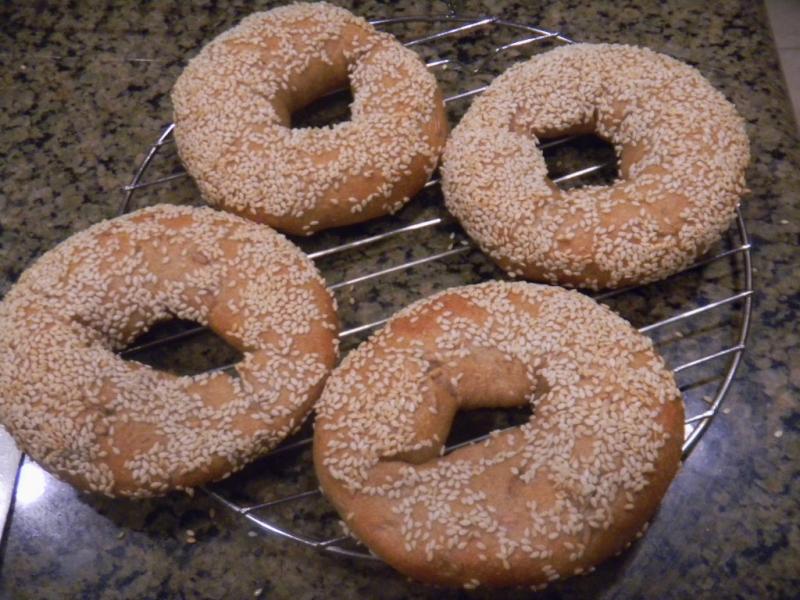 We weighed out the dough in 102-103 g portions to end up with 12  nice sized bagels that ended up at 85 to 90 g (with seeds) when baked.  Stan's recipe doesn't call for any bulk ferment prior to or after forming the bagels or after retard either.  I guess they were supposed to only rise in the fridge.  The bagels are formed right after kneading and placed on parchment, covered in plastic and placed directly in the fridge for an overnight retard. 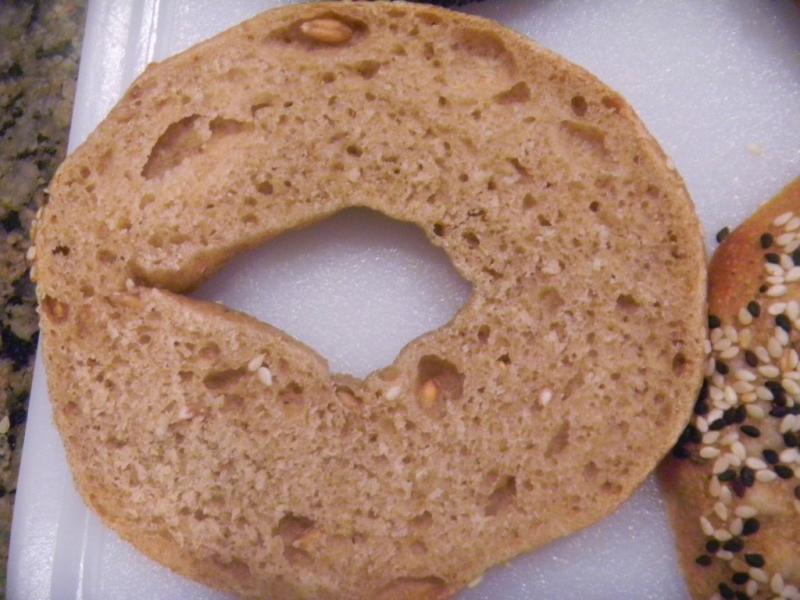 The bagels are then removed from the fridge the next morning and simmered in malted barley water for 1 minute, (30 seconds a side -mine floated right away) then dried slightly (we used a non terry cloth towel) before dipping them in the sesame, poppy, salt or combo toppings.  They go back on the parchment and directly into a 450 F oven preheated with steam in place for 8 minutes.  Then the steam is removed, the bagels turned over and baked for another 8 minutes. 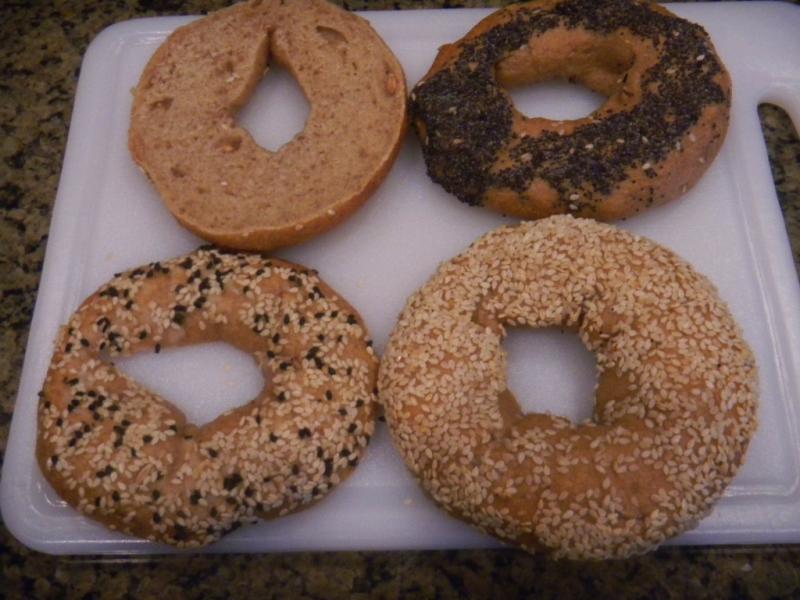 I tested the baking with 4 bagels and found that, using 2 of Sylvia's steaming pans with towels and water, the bagels needed 10 minutes of steam then flipped without steam for 10 more minutes and then flipped again for 2 more minutes - 22 minutes in all instead of 16.  We made 4 sesame, 4 poppy and 4 combo black and white sesame with kosher salt. 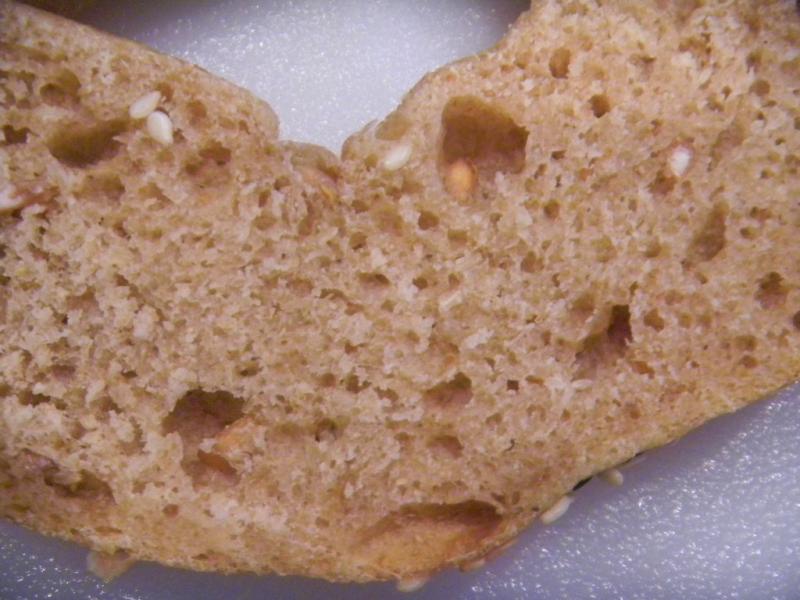 The bagels didn't rise as much as we wanted even though they tasted very NY authentic and had fine chew just like they should.  These would be great bagels if allowed to proof in a trash can plastic liner at room temperature - possibly after simmering in the water.  Maybe someone would know the correct thing to do.  I read later that David Snyder lets his bulk ferment for an hour before forming and retarding.

The formula follows immediately if not sooner.

Those are beauties, dabrownman.  Could I feature this post on the home page for a bit?

You are most gracious and I am humbled.

Holy Bagels Dabrownman you have achieved Wholly Bagels! Great taste to go with great looks, talk about a win-win....

Don't know about letting proof at room temperature. After forming, mine have always spent the night in the refrigerator, then had their warm bath and gone right into the oven but I have wondered what would happen if you let them warm up. Maybe they would be too delicate for the water bath then?

I personally think they need to proof after shaping for an hour or so until they expand say 70%.  Then slap them in the fridge overnight and let them expand to 90% proof in the cold and harden themselves up.  Then, as Stan says, 'wake the yeast up' by giving them a hot bath right out of the fridge in the morning, topping them and slapping them right in the oven.  These are awfully nice bagels with an authentic crust, crumb and chew we like to go with the multi-grains and sprouts which is our favorite kind of bagel.

Thanks for your nice comments.  Can wait to see you and your sisters next ITJB bake!

Congrats on your first cover! Beautiful bagels. I'm going to make these for sure.

We do like these bagels and they remind me of your neck of the woods near NYC.  Take note of my thoughts about fixing the rise in my reply to gmabaking below.  I think it needs some counter proofing to 70% before retarding.  That is the only thing I would change besides using lye in the boil if I ever find any.

They are healthy, hearty and tasty!