Bakers from Mexico in 1930s

Bakers from Mexico in 1930s 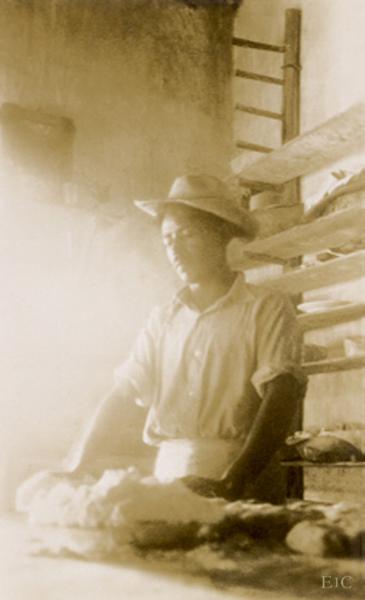 I haven't been baking lately because I'm on a health regimen (for three weeks!) under which I have to jettison all joy-inducing things like wine, bread and cheese, to name just a few. All self-imposed, I'm not ill, just trying to be healthy. So I haven't been as active on the site, but I've been cheering you all on from the sidelines. It's funny, I've done this regimen quite a few times before and don't miss eating bread as much as I miss the process of making it!

Anyway, I'm working on a project of cataloging and repairing some photographs my mother took way before she was my mother, while she was living in Mexico City in the mid 1930s. Her name (later, after marriage) was Eleanor Ingalls Christensen. She had just graduated from Wheaton and would go on to do graduate work in fine art at Radcliffe, and in between took a job tutoring the children of an American couple living in Mexico. She took many wonderful photographs while living there, and now that she's gone I love looking through them. I'm trying to get an album of them ready to honor her memory on Mother's Day (will also try to even out the variation in overall tone; they have aged differently from one another). I thought you 'TFLoafers' might like to see some of the ones related to baking, so I'm posting them here. The one at the top I have framed and hanging in the entrance to my kitchen. It's my favorite. 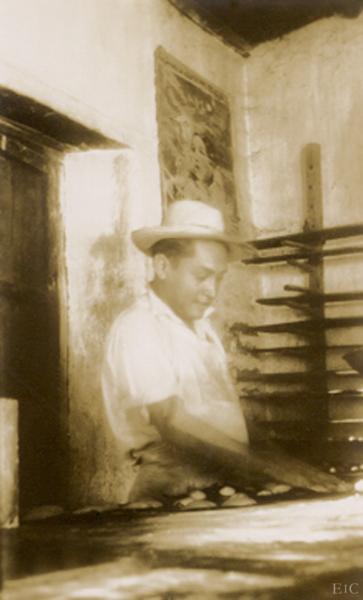 Below: "The tamale maker." 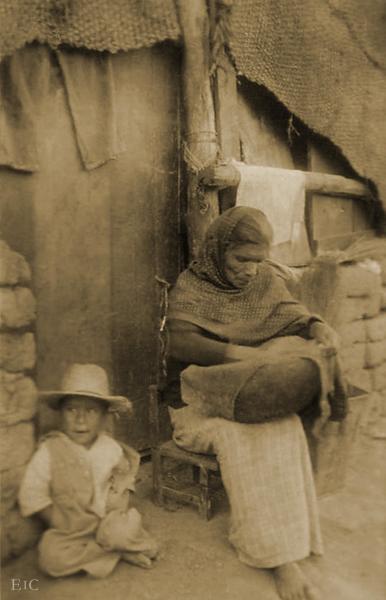 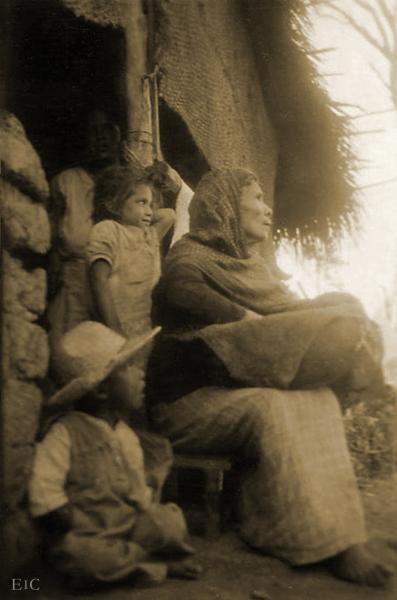 Below: This appears to be a wood-fired oven. 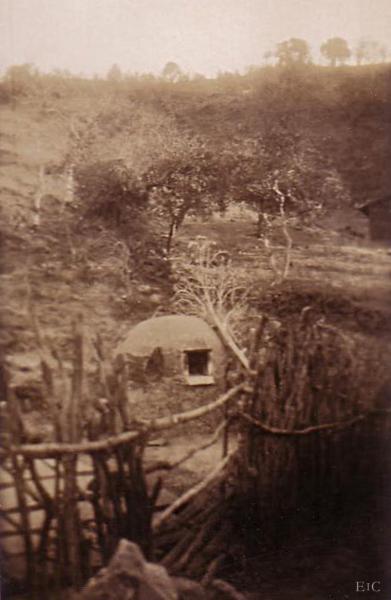 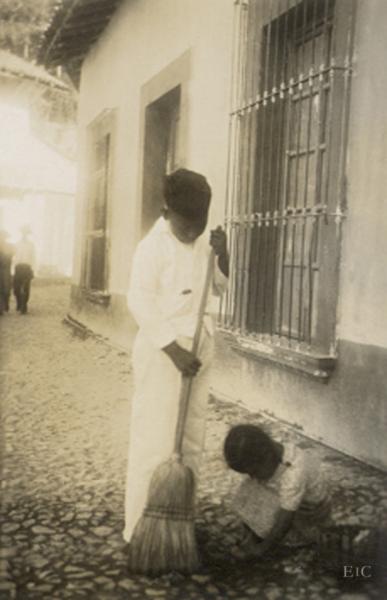 Happy baking to you all!

Evocative of a time and place like Edward Curtis. Precious. Take GOOD care of those!
Thanks for sharing!
Tom

Thank you so much for your kind comment, Tom. I do treasure them and will try to preserve the originals as best I can. I'm glad you like them!

Thanks for sharing these images. It's v. interesting to see the process of breadmaking in another time and place (and esp. glimpses of its social context.) I wonder what that poster from the second shot is, perhaps a calendar or ad? Great stuff here...

Until you mentioned "poster" I was thinking of it as a wall hanging, maybe woven. But I think you're right -- probably for a movie. I have another shot of that baker from a very slightly different angle. The baker is out of focus but it does show the poster just a bit more: 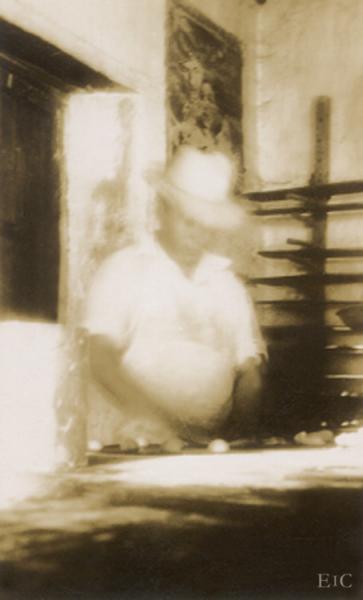 Thank you for your comments, Susanne!

Thanks so much for the posting of these photos.  Priceless and I love that they are black and white.  Somehow they capture the essence by all the nuances of light that leave a soft impression of something timeless....and what better subject then baking.  These capture the 'dailyness' of the process and how it is touched upon by all ages of life and both males and females.  An anchor of sorts in all walks of life.

I hear you about missing the baking process more than the eating.  I can not eat any of what I bake and am fine with that but I would be devastated if I couldn't bake.  So I bake daily and give most of what I bake to others. :-)  Nothing is nicer than seeing a bank teller's face light up when presented with an unexpected loaf of bread.

Take Care and thanks for sharing!

Thank you for your wonderful comments, Janet. I couldn't agree more about b&w images and how the process touches every life and has done for centuries. Yes, an anchor!

I somehow was unaware that you're not able to eat your bread! Wow. How lovely that you bake to give!

Thank you for your note,
Janie

those pictures are so amazing.   A window into a different time and place.  The first one in particular is just stunning.  What a wonderful thing to have from your mother.   Did she continue with her photography?   -Varda

I especially love that first one, too. I don't know what it looked like when it first came back from processing, but now its age has added to whatever magic was there originally.

Yes, my mother continued with photography. She had a darkroom in the house where I grew up and later in life she went back to school to finish her masters in art with photography courses. I cherish the photos and writings she left behind and often feel like I'm helping to complete her work for her by digitizing and repairing and in at least one case (with some work from Paris) looking for a publisher.

for Cinco de Mayo where the Mexican militia defeated  French Army at The Battle of Puebla in 1862.  This is a regional holiday in the

Puebla surrounding area.  Once the Mexicans learned how to make Fench bread it was ony a matter of time that the French had go and they did on September 16th - Independence Day for Mexico.  No Bolillo otherwise :-)

Wow, what an interesting connection between Mexicans and bread that I wasn't aware of. The interweaving of cultures, unfortunately due to war and domination. I don't know what Bolillo is, but judging from your comment, I guess it's good!

Thank you for that historical perspective, dabrownman. I had no idea.

where the French went or colonized, they wisely took their bread with with them.  Who could live well without it?  Thus Vietnam's love of and expertise with French bread too.

Fascinating and beautiful photos.  Thanks for letting us get a glimpse of your Family life.  I wish I had something similar from my Father .

I'm so glad you enjoyed the photos. It certainly is wonderful to have something like this come down through your family, and I'm grateful that I come from a long line of pack rats who kept letters and photos and newspaper clippings and...and...and... as MFK Fisher liked to say. It's quite a treasure trove.

Janie,
Your mother's photos are so interesting - a glimpse of history! - and how wonderful that you are preserving them.
Looking at these photos, I was reminded of a book I have, 'My sweet Mexico', by Fany Gerson. She comments on panaderías (bakeries) and panaderos (bakers), and notes "many bakers firmly believe that the hand of the panadero is irreplaceable and that the heart you put into your bread cannot be felt through a machine" (referring to when mixers are not used).
I look again at the photos, showing these bakers working with their hands, and imagine the heart that went into what they were making.
:^) breadsong

I love that title and the quote from the book, breadsong. I'll have to see if I can get my hands on a copy. It sounds wonderful.

Thank you so much for your lovely comment. The photos do convey something that's hard for me to put into words, but "heart" is at the center of it. It's always great to hear from you!

Great old pics Janie.  I particularly like the one at the top.  Interesting angle and the lighting makes it looks like clouds of flour are billowing up from the table.  What camera did your mother have?  How are you restoring them?

It's nice to hear from you, and I'm glad you like the photos. The lighting in that top one transports me.

Unfortunately, I don't know what type of camera she was using. In fact, I don't know what would have been available in the 1930s. Somewhere I think I have letters that she wrote home from there and I plan an 'archeological dig' in my storage room one of these days to see if I can unearth them. They might provide some clues.

I'm digitizing them by scanning them at 300 dpi and then working with them in Photoshop to repair damages. I'm leaving the photos themselves as is, since there's nothing to be done but try to store them responsibly. There is surprisingly little damage from age. I would have expected more, but still it's a painstaking process. I love every bit of it, though!

All the best,
Janie

What a fabulous archive! These photos are magnificent! Thanks for sharing them.

Thank you so much for your nice comment, Sharon! I'm glad you enjoyed them.

My dad lived in small-town Mexico back during the '30s ...nice to see a window into the world he lived in.  Thanks!

That is such a nice comment, Brian. It's great to be able to share things like this -- you never know what kind of connection others will have with it. Thank you for letting me know!

Life was quite a bit different in those days versus now, both in Mexico and the US.  It almost makes you want to have been born back then rather than now ...well, except for the dentistry of those days!  Thank God for modern medicine!

Those black and white pictures are wonderful.  I was born and raised in Mexico City and I can tell those pictures were taken in the country side where there is a bakery and a tortilla factory en every little corner.  El Pan de Pueblo (town's bread) was and still is one of the most popular things around.  The bakeries is Mexico City are much more sofisticated with the most wonderful pastries around. The "bolillos" are like small bagettes sold all over the place and it is literelly the daily bread which is baked about five times a day.  One of the many things I miss the most from Mexico City is definetely the bakeries and the wonderful aroma of fresh baked bread all over the place.  When I go there every year to visit my mom, the first place we go after I get off the plane is to buy bread to one of my 6 favorite bakeries.

Anyhow, I got of the subject but looking at those beautiful pictures brought lots of memories of my childhood when we would get out of the city to go on a ride and visit little Mexican towns in the country side and discover their great bakeries.

Thank you for sharing.

Gris, thank you for sharing those wonderful memories you have of the bakeries and the bread of Mexico! I've never been there, but you make it come alive. It's so sweet that you head to your favorite bakery as soon as you get off the plane! You sound like me. I'm glad these photos sparked good memories for you and I'm grateful that you shared them.

All the best to you,
Janie

Lovely comment, Gris. I have thought about these beautiful photos since I commented last week. Has anyone created a book of traditional bakers and their ovens? What a project that would be...

I love that idea of yours, Sharon. I don't think I've seen a book like that, although come to think of it, I once got an old book out of our library called "The Bread Ovens of Quebec" by Boily and Blanchette. But a gorgeous, modern book would be a treat. Maybe you'll inspire someone to take on the project, or maybe you'll take it on yourself!

I would love to do a book like that. Who knows what the future will bring...I would love to document traditional ovens plus some of the fabulous modern hand built ovens people are creating nowadays.  I'll put it on my to-do list. (the list is long)

Love the photos, Janie! They bring back memories of Mexico (my paternal homeland) for me, and of bolillos.

I love getting comments like that! It makes me glad to think these photos brought memories of your paternal homeland and the bread from there. Thank you, Dragonbones!