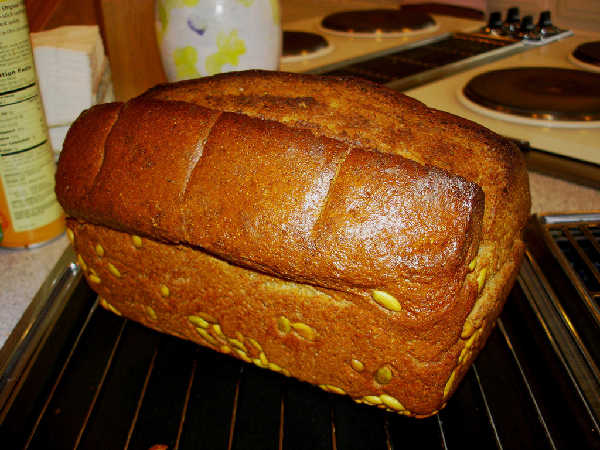 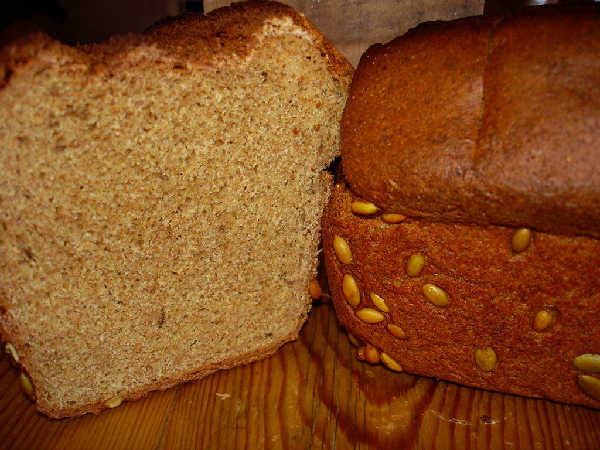 We had a German exchange student stay with us for a couple of weeks recently. Marcel is about 17 years old, and we hit it off great. He shares an interest with me and my oldest son and daughter, who are about the same age as Marcel, in physics, math, computers, and music. He is one of the nicest, most polite young men I've met. One day I was making some sourdough bread in my kitchen, and I noticed Marcel paying very close attention to the process. He then mentioned that his grandmother, who lives with his family in Germany, frequently bakes breads, and he is a big fan of her breads. We quickly discovered that bread was another of our shared interests. He described going to a mill near his village and buying spelt flour and rye flour of a coarseness specified by his grandmother for her breads. What a difference from buying over the internet, as I tend to do here in NJ. So, I asked if he could recite some favorite recipes for me. He then got on the phone with his grandmother, and she emailed us two recipes, one of which is described here, and one will be described in a separate blog entry (potato bread). We had quite a time translating German baking terminology into English for my use, including struggling with the word edelhefe and with correct translations of some or the names of spices. Also, there was some confusion over methods of handling the dough, but eventually, I felt I had enough information to try these recipes. When Marcel returned to Germany, he also forwarded to me some photos he took of his grandmother's process.

I have photos of my process for this bread and the potato bread recipe. Since I did both at the same time, there is an intermingling of the two breads, but I hope it will be clear what is going on with each bread.

Mix water and flour in bowl until flour is hydrated, and set aside for 30 minutes. Mix a small amount of flour with 1/2 cup of warm water, yeast, and the honey. Let sit for about 1/2 hour until it foams up. When I did this, the foam about doubled or tripled in volume and was very foamy.

Mix in salt, spices, nutritional yeast flakes, the contents of the cup with the yeast, flour, water, and honey and mix in mixer or by hand. I found the dough a little dry at this point, so I added just a touch of water to facilitate mixing the ingredients. The dough was fairly stiff but somewhat sticky, even after the addition of a small amount of water. I kneaded it for just a couple of minutes to fully mix all the ingredients and to bring the consistency to more like a dough. The recipe Marcel's grandmother gave me doesn't specify any kneading at all. I suspect that is correct, and that I should actually have just stopped after minimal mixing, based on a photo she sent me of what the dough looks like after mixing. Mine rose more than hers appeared to, and I think the bread may be meant to be a bit more dense than what I came up with doing what I did here.

I greased the sides of a 9 inch glass loaf dish with butter and sprinkled pumpkin seeds onto the butter. The seeds barely stick to the sides, but they do stay in place. I then formed a stumpy batard, which I shaped in much the same way that JMonkey did in his whole wheat bread shaping video. Again, I may have done more shaping and kneading than was intended based on the pictures, as I look at them in retrospect. Marcel's grandmother has a picture that I now see may have been more significant than I thought where she simply dumps the dough straight out of the mixer and into the loaf dish. I believe there is less kneading and mixing intended by Marcel's grandmother than I did in my version here.

Slash the loaf down the center, and place the dish in a cold oven and turn the temperature to 400F for 90 minutes. The bread rises nicely as the oven preheats. I forgot to slash the loaf, so I tried to do it after about 15 minutes. The crust was already forming. You can see the result from the pictures, which is not all that pretty. Sorry, it would have worked beautifully to slash before putting it in the oven, even though the oven started out cold. Oh well, I'll do better next time. The internal temperature of the loaf was about 205F after 90 minutes, and the crust was quite thick, hard, and dark.

Allow the loaf to fully cool. I dropped it out of the dish and let it cool on a rack.

The crust that results is delicious. This bread tastes just great to me, and I generally have a big bias toward the flavor of sourdough breads. However, this yeast raised whole grain bread was just delicious. I realize I must be missing out on some wonderful breads in my baking life by not paying enough attention to German breads. Thank you Marcel, and Marcel's grandmother for sharing this wonderful recipe, for sending me photos, and for spending a lot of time and effort translating and explaining the ingredients and procedures that I was not familiar with.

Spelt bread is just so yummy. I think I will try this recipe!

Enjoy. I have to say, this bread tastes just great. Everyone in my family has tried it, as well as my son's girlfriend, who lived in Germany for a while. They all loved it, and my son's girlfriend said it definitely reminded her of breads she had while she was there. Her comment pleased me to no end as you can imagine, since I have never traveled to Germany myself to taste any bread like this.

mmmmmmmmmm I juts finishd reading the potato bread entry and my mouth is watering.

I will definitely try these in the next few weeks :)

Thank you for sharing them with us!

Thanks. Let me know how it goes. This was a very fun day. I've been feeling guilty about the fact that Marcel and his grandmother went to quite a bit of trouble to share these with me, yet I hadn't made them until now. I promised them I would try to bake these breads and post the results here. I'm so glad I finally did it, not only to follow through and honor their efforts to share these nice recipes, but also because the breads that resulted are delicious and look great too. I only wish I hadn't made the little mistakes I did, or they would be more worthy of grandmotherly praise.

Well I think they look great and I can almost smell them through the screen!

Mistakes help us to learn. :)

So next time you make them you will know not to proof the potato bread for longer than 15mins etc. I dont always go by the instructions. I seem to bake by feel and sense.  sometimes works, sometimes doesnt. so I will be sure and definitely follow these instructions by the letter!

Bill, you did another terrific job of detailing your efforts. Thank you for sharing the story of your efforts to recreate this wonderful bread. The texture looks really delicious. I've not baked with spelt flour yet but you have made a good case for trying this formula out.

Thanks. I loved doing this today. What fun. I'm now emailing Marcel, so he and his grandmother can take a look (tomorrow, I guess).

I have a question though.

In your pictures on your site, What are the pictures #8,9 & 11? They look like dough spread out in a circle whith some sprinklings on them. As far as I can tell, I didn't read any such thing in either of the two German recipes. If it something different of it it a part of one of these recipes?

I had mixed the flour and water first and let it sit while the yeast was proofing. Then, I spread the mass out on the counter in a big circle and sprinkled the additional ingredients into the mass, such as the salt, spices, and flour. That's what you're seeing there. I believe the recipe Marcel's grandmother sent would just have you mix everything at once in a mixer and go from there. There are some pictures of this process sent by Marcel that he took of his grandmother's process.

I see there is no fermentation at all? You just mixed up the dough, shaped and droppedit in the oven?

Yes, the recipe just specifies dropping it in a cold oven and turning it on. I verified this with Marcel. If your oven is hot from being used for something else, I would let it rise at room temperature first. The trick is to estimate what amount of time at room temperature will approximate the slow rise in heat from a cold to a hot oven.

I will try it out. Too bad I'll have to go buy ssome nutritional yeast flakes first or I would have started it right now :(

Hi there.  I am wondering if the spelt bread is crumbly and dry.  I bake mine before like a whole wheat and it turned out crunchy from the outside but when I sliced it - it tend to break into pieces(kinda crumbly).  I am thinking of baking another one using your recipe this time.  I just need to go buy some anise.

I wouldn't say it was crumbly. It was very crunchy outside and a little dry and dense inside. It didn't fall apart when sliced, though. Since it is my only experience, I can't say what it should be like. Maybe someone who has had "real" dinkelbrot can help us with a description of how the crumb and crust should be in the genuine item.

That's a lot of nutritional yeast for one loaf! That's not a traditional ingredient in German spelt bread is it?  Doesn't it make the bread taste cheesy?  Jonathan