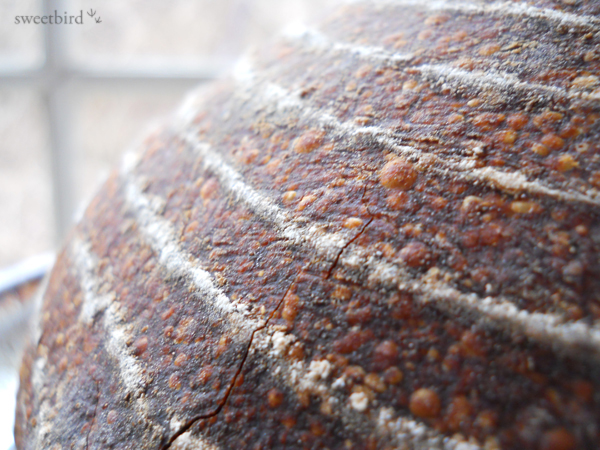 I’ve been raiding my freezer for slices of homemade bread lately and decided it was time to make some fresh loaves. There will never be a shortage of frozen homemade bread in this house but there are times when I just can’t stand it—I have to bake! I picked Glenn Snyder’s San Francisco Country Sourdough as my project and I’m so glad I did. It’s a lovely formula. Here is a link:  http://www.thefreshloaf.com/node/25402/sf-country-sourdough-%E2%80%93-my-best-ever%E2%80%A6not-sure-why.

I had made this once before with excellent results, but ended up making some minor changes both times. Not from any desire or need to improve the formula, but just because of “conditions on the ground” as the generals say in wartime.  First time around I had to refrigerate the dough after 1½ hours of the bulk ferment. I took it out in the morning, did a rough shape, bench rest and final shape and it came out beautifully.

Flours used were King Arthur AP, Central Milling organic whole wheat, Bob’s Red Mill dark rye. Also spring water and Celtic salt. My sourdough culture was at 100%, so I made a minor adjustment to the water to compensate (Glenn calls for 75% culture).

This time I decided to follow a kind of Tartine-style handling of the dough. After the autolyse I added the salt (in my case I used fine Celtic salt) along with a tiny bit of water (I had held a little back in the earlier stage) and did a rough mix by hand in the bowl, finishing up with quite a few stretch-and-folds. Since I hadn’t mixed it quite as thoroughly as the formula calls for, I changed the S & F schedule and did one every half hour for the first two hours of the bulk ferment, then I left it alone for the final hour. At the end of that time, it was lively and pillowy and it smelled of gentle wheaty fermentation.

I divided into two halves and pre-shaped, then left it to rest for about 45 minutes. Then shaped into two boules and placed into 8″ brotforms. I put one in the refrigerator and kept one out to rise and bake.

Since I was already in a Tartine frame of mind, I decided to bake the first loaf in my Dutch oven. Preheated the oven to 500°F with the Dutch oven on the lowest rack. Turned the boule out onto a rectangle of parchment paper lightly dusted with a 50/50 blend of AP flour and white rice flour, took hold of the corners and lowered it—carefully!—into the Dutch oven. Then I closed the lid and returned it to the oven, reducing the temperature to 450°F. Glenn calls for a reduction to 460°F but I though it best to go a little lower since I was using a blazing hot Dutch oven. As it turned out, I could have reduced it even a bit more; the lower crust was somewhat overdone.

That loaf was a wild thing, with explosive oven spring. It felt almost weightless when I removed it to the cooling rack. As with my Tartine loaves, this had gorgeous, deep caramelization. The flavor once it cooled was a real delight—a crust that crackled when I cut through it and released deep caramel-wheat flavor when I bit into it. The interior was sweet and somewhat moist. Not much sourdough tang. I assumed I would get more of that in the loaf that was resting in the refrigerator overnight, but that turned out to not really be the case.

I baked the second loaf the next morning in the more traditional way on a heated baking stone on the middle shelf, with steam for the first 12 minutes. It also had exuberant oven spring, but was a little more controlled. I had taken it out of the refrigerator for about a half hour before baking, as it seemed to need it. This was my favorite of the two loaves. An incredibly deep, blistery, crackly mahogany crust, loaded with flavor and texture, with a soft but substantial interior. I really loved this crust, as you can probably tell from the overabundance of pictures! This one also felt as light as a feather after baking (+ its 10 minute rest with the oven off and the door open).

This is a great sandwich or toasting bread, and last night I made croutons by roughly cubing up several slices, crust and all, and putting them in a hot cast iron frying pan with extra virgin olive oil, garlic, parsley and basil. These got sprinkled over a homemade escarole-bean soup and made for a memorable, comforting meal on a wintry day.

Thank you for the formula, Glenn!

All the best,  Janie 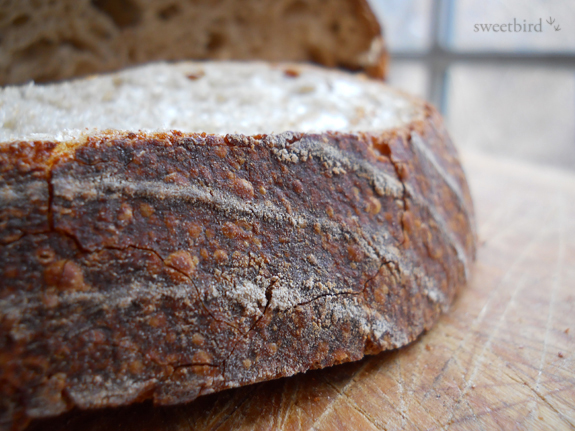 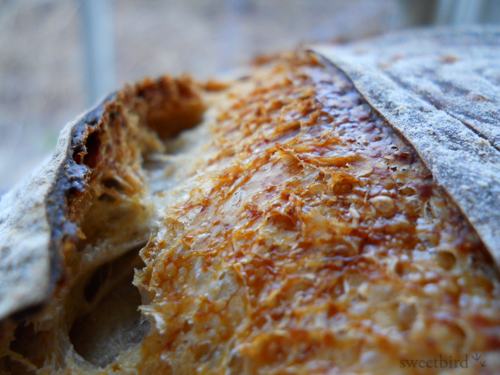 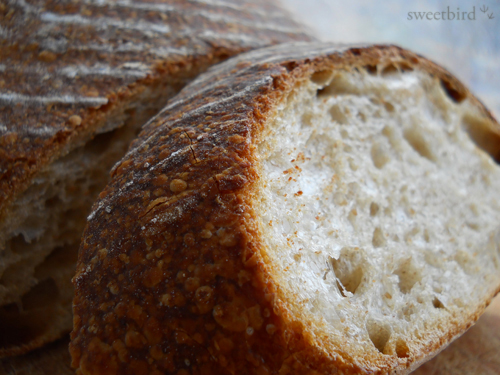 My mouth is watering looking at your beautiful crust and crumb!

What a lovely write up ... and the bread looks exquisite! That is my kinda crust ... gotta be dark! :)

Beautiful photos ... you captured so many shades of the bake.

Great looking bread.  Love the bold bake and the blistering.  I am sure there is a lot of flavour in that crust.

Can you teach me to make such beautiful bread?

Nice job on my favorite sourdough.  I'll have to try it in a Dutch Oven some time.

Janie,
That's got to be one of the prettiest crusts I've ever seen.
Thanks so much for sharing these photos.
:^) from breadsong

Glenn, I'm sure you could teach ME a thing or two! I'm glad you liked my version of your bread. I can report that I had the last of it today with some soft goat cheese and avocado, and it made a delicious lunch. I hated to see it go, but I'll be putting this one in my regular baking rotation. It's a winner. I liked the one I baked in the Dutch oven, but I think the one I baked the next day on the hot baking stone was even better. I think that's the one in the top photograph and the photos of the slices.

Phil, thank you for the mention of the photos. Since you're a master of the game I especially appreciated that!

I didn't see your comment until I had posted mine. Thank you! I love your baking...Janie

Thank you Janie - that's kind of you to say.
Please share more pictures of your breads - they are beautiful!
:^) from breadsong

the best looking crust on teh Planet Earth then it sure is on Mars.  I don't think it gets bettert than that Sweetbird.  It must taste incredible too!!  Very nice bread indeed.  Thanks for the link to Glenn's formula and he get a nod of approval for it too.  I'm guessing I can't get my dutch oven to do that at 1000 degrees :-)  What size is your DO?

More to aspire to !

Thanks for sharing, Janie,

You made me laugh with your comment, dabrownman! I have a Lodge 5-qt. Dutch oven like this one: https://secure.lodgemfg.com/storefront/product1_new.asp?menu=logic&idProduct=3948. It gives me fantastic, deeply caramelized results, especially with Tartine loaves. HOWEVER, the crust that is predominant in these pictures is the second loaf, which was baked directly on a hot baking stone, not in the Dutch oven. The slices and the photo at the very top are of the loaf baked on the stone; the others are the loaf baked in the Dutch oven.

For the second bake, I pre-heated the oven & the stone at 500F for about 45 minutes, put a shallow tray on a shelf below and poured 1 cup of boiling water into it just before loading the loaf, then loaded the loaf & turned the oven down to 460F. Checked at 12 minutes to make sure the steam had steamed out (it had) and then let it go for about 30 minutes more, give or take some. When I judged it was done, I turned off the oven, cracked the door open and let it sit for 10 more minutes before removing it to a cooling rack & admiring its beauty. That is more or less the original method that Glenn suggested in his post and it worked perfectly!

on my baking list for next week Wednesday - right after teketeke's yeast water white sandwich loaf.  After looking at Glenn's formula, which is much to my liking except, I will up the rye to equal the WW and cut back on the white.   I will,  per your explanation, bake it on a stone with my usual steaming.  I will also skip the wheat germ since I will also grind my own rye and WW.

To be honest, I haven't had much luck with Enameled DO or my Wagner Ware Magnalite either.  That is why I asked about the size of yours.  The one I have been using is bigger.  I thought the spring was too little but I also have a 5 qt too so I will try that out on another bake.

I am hoping to get half the crust color and texture you got though.  Tell me it really is out of this world bread and not just fancy photography :-)

No "fancy photography" here -- this was great bread with a great crust! Chewy, deep & delicious. I'm looking forward to hearing how yours comes out & I wish you a very successful bake!

...and equally gorgeous photography. Looking forward to more posts from you.

I just finished a fairly successful experiment with a Joe Ortiz bread that I hope to post about later today. Not quite as special as this bread, but an intriguing one that I want to keep tinkering with.

of your version of Glenn Snyder's SF Country Sourdough in a pretty Mexican basket for its final proof and should be baking it off in a couple of hours.  I did up the rye to WW levels but also took a minioven tip and boilded 50g total rye and WW berries for 30 minutes to soften them, drained them and then sauteed them with a tsp of olive oil to caramelize them.  These were added at end of the 5 minute mix.  Since this will be a more rustic bread I am changing the name to: Rustique Pain Comté de San Francisco.  Don't know why but it is very French of me. Here is a picture before bulk ferment yesterday.  It's out of the oven now.  Not as nice a crust as yours but pretty good for me. 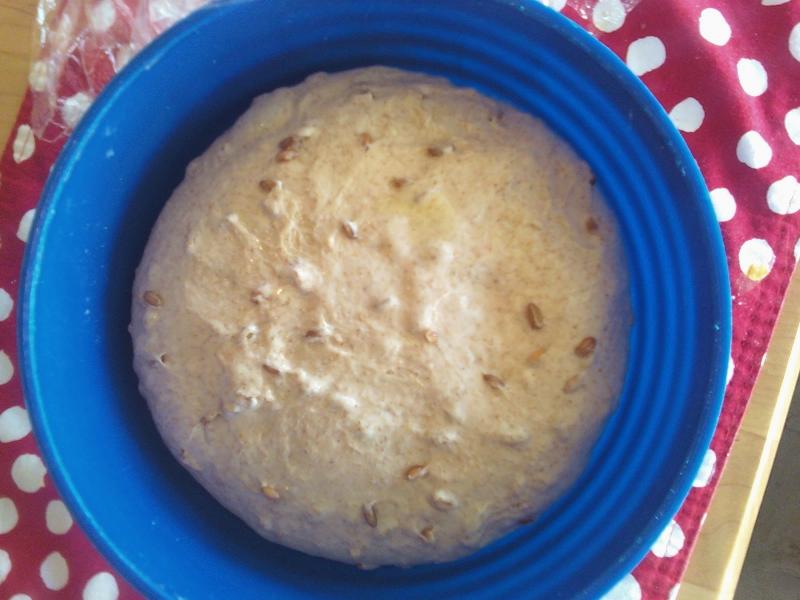 That looks great, dabrownman! I love the rye and wheat berry idea that you got from Mini Oven & I'm looking forward to hearing how you like the flavor when it cools down. That's a beautiful deep brown crust!

The crumb is not nearly as open as yours.  This was probably due to my grinding of the rye and WW, not sifting it, the extra rye flour and the boiled caramelized rye and WW seeds but the taste and texture of this bread is exceptional and rates right up there with the best I have ever had.  It is aptly named as Rustic Country San Francisco Sourdough - in English.  Thanks for pointing me in the right direction and thanks to  Glenn for his original recipe.  I will post this recipe and other photos on my blog. 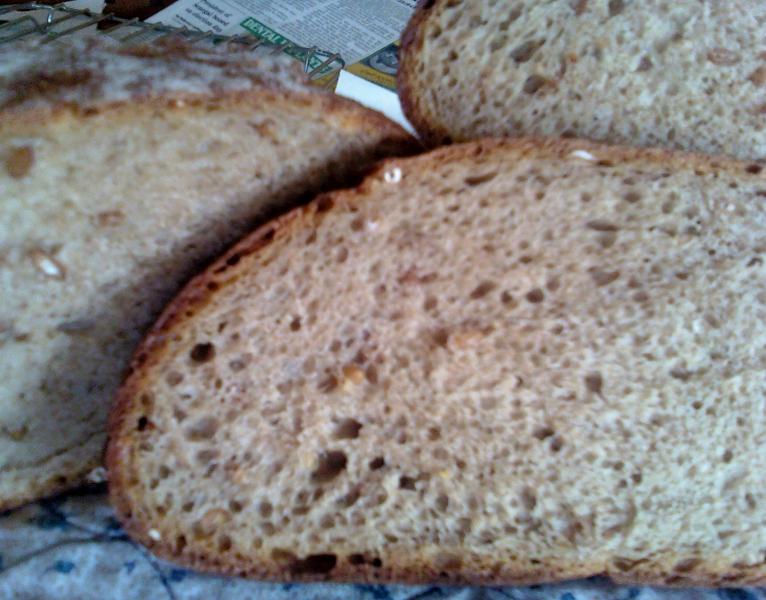 That looks like a very fine slice of bread and I'm so glad you're happy with the flavor. It's interesting to see how the changes you made affected the outcome, and it's a testament to a good formula that it can be modified and still come out wonderfully. Thanks again to Glenn.

Thank you for your comments, Mebake!