Been trying out a lot of recipes since my last entry, nothing worth to mention what had not been done before, I played around with my sourdough starter

I exclusivly use white flour/bread flour now. The rise may it be bulk fermentation/proofing is nothing much sensational on the contrary, but every

bread i make lifts off in the oven. A guy at the mikrobiology department told me over time strains take over others, one may become dominant, and it is not

said that visibility of activity always indicates the lack of it, this starter is easy to test with the water test, when you taste it it tingles on the tongue and i have a 2-3 day window of using it since right after refreshing it goes right in the fridge, a day later to 4 days its potent, this allows for more flexibility, with

rye starters i could see more development during the rest phases but the window of opportuinity was smaller using the starter. With this i get constant great results and it is also apt to venture into spiking bakers yeast recipes with sourdough. (sourdough/bakers yeast pizzy is a delight) I was pretty amazed at this result country bread form tartine bakery....

I used bread flour instead of white flour, it has more aleurons, and much higher protein content, you could say it is partly wholegrain :) 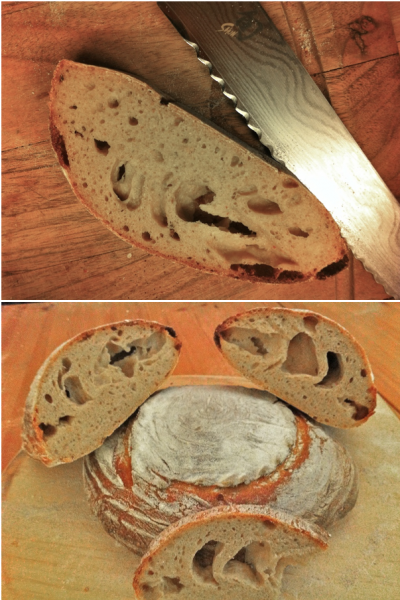