The second bread on my "Equal Opportunity Baking" list (http://www.thefreshloaf.com/node/26944/fair-baking-my-equal-opportunity-pledge) got its place near the top because of my curiosity.

In the past I had read several comments on the many errata in Leader's books, and, therefore, decided not to buy it. But Christmas came, and, being blessed with three daughters (2 step and 1 own), I found several baking books under the tree, among them "Local Breads".

With my fair baking pledge in mind, I searched for the errata posts in TFL again, and saw Mini's (MiniOven) comment on a translation error, a mixup between the German term for caraway = Kümmel (a typical German bread spice) and cumin = Kreuzkümmel (a spice used in Indian and Middle Eastern dishes). Both taste totally different, and cumin has no part in traditional German cuisine.

I looked at the German bread section in the book, and found that Mini was right. Somebody had posted Sharon Burns-Leaders' contact address, and I emailed her about Mini's and mine observation. She answered me promptly:

"Thanks for the correction! Since it was pointed out it seems quite silly that we never questioned it! I do try to answer all of the queries from readers personally myself,  though reading through some of the posts on The Fresh Loaf was, I have to admit, a bit frightening.  We did work very hard on that book and I personally tested every recipe so the personal and passionate comments were a little hard to hear when they were critical, however, I am amazed, as always, at the dedicated and talented bakers that are out there!"

That was a very gracious answer, and I decided to cut Leader's book some slack, and find out for myself how his recipes are working. Because I like breads with walnuts, I chose a variation of his Whole Wheat Sourdough Miche, French Walnut Bread.

I have a lively 75% hydration starter in my fridge, so I didn't have to make a levain from the scratch. Leader's stiff levain contains a mix of all-purpose and whole wheat flour, so I started with feeding my whole wheat mother starter with AP flour, adjusting the water to make the stiffer levain.

Since I had decided to give my new KA 600 Pro a chance, I mixed the dough with it,  again regretting my jump at Amazon's "Black Monday" bait, when the bowl started wobbling and would have jumped out of the holders if it wasn't held down with brutal force.

Long experience with nut additions told me not to wait until the dough had fully formed (it's a real big pain to work the nuts in at this stage - I really don't know why all baking books, from Reinhart to Hamelman insist on doing that!), so I fed them slowly to the dough while kneading.

I basically retard all my doughs, so I did the same with the French Walnut Bread, placing it in the refrigerator after an hour of rising, and a brief kneading. The dough was, as expected, a bit sticky, but not too difficult to handle.

Overnight the dough had almost doubled, and, after it came to room temperature, behaved exactly as it should. Instead of steaming, with ice cubes I used a steam pan and boiling water - why lower the oven temperature unnecessarily?

The result was a good tasting bread, with the typical purple-ish color (walnut "dye") and a nice airy crumb. 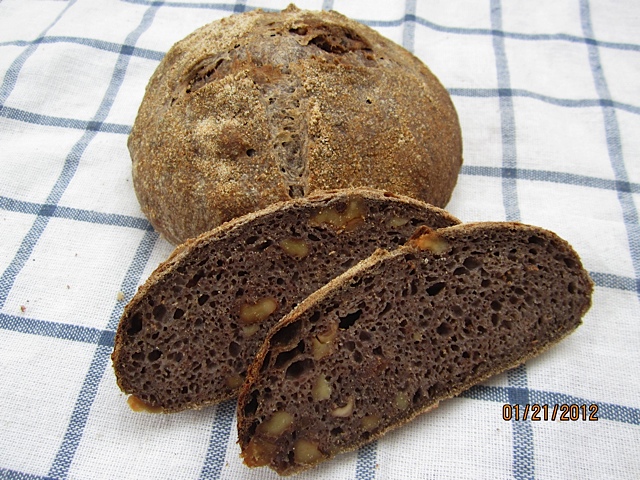 Next time I might just use S & F as in Peter Reinhart's "Artisan Bread Every Day", instead of a long, slow knead.

Buckwheat is still a screwed up formula too!

The errata in this recipe I could correct from the list posted in earlier threads, so everything was okay. When I make another recipe from this book, I will try to watch out for errors. Jeremy, what were the special problems in the buckwheat formula?

Bravo for taking on Leader's book!  I am surprised you got a response from his wife as I wrote them once too when I considered giving the book a try yet I never got a reply....

SInce then I have read many blog pieces about people baking one of his recipes and all was well so I am thinking it was all a big to-do about nothing....nobody is perfect and writing a book with recipes and soooo many numbers  it is totally understandable that there will be errors that even the best editor misses.  The text in the book is delightful - the stories behind the breads make it a good read even if one doesn't want to bake from it....

It is still on my list to get to so maybe one of these years....I am inspired by your jumping in and thank you for sharing the story and the loaf you made!  Tis good to know that your over night fermenting works just fine with this loaf too....

I don't recall Hamelman, or Reinhart incorporating the nuts after full dough development. Hamelman mixes most of his breads to moderate development, then incorporates the nuts/ fruits. I find no difficutly in doing so, too.

Shiao_Ping, adds the nuts/fruits at the final sets of stretch and folds.

Walnuts are such a perfect addition to wholewheat bread.

Janet, I find the taste of whole wheat really improves with longer fermentation. I started liking higher percent whole wheat breads only after learning about working with pre-doughs and long fermentation from "Whole Grain Breads".

And for my schedule it's just more convenient to retard the dough overnight. My loaves didn't look quite as pretty as those on the photos from "Local Breads" (next time I would slash them a bit deeper,) but they taste good, and I also like the smaller size of the miches, like the perfect lunch portion.

I totally agree about PR's method.  What a huge difference it makes and your baking notes are what taught me how to take his method a step further....I saw your breads and thought....humm,  I can do that too and it is a time saver to let them do the bulk ferment overnight!

Thanks for the lessons and your great whole grain breads.  I always look forward to them and many are our household favorites now :-)

I'm happy to share my experiences. Since I bake several loaves every week for sale, out of my home kitchen, I learned a lot by trial and error, and tweak, and tweak again to make this process doable with my "housewife" equipment (except for the Hobart), and get to the best possible results.

Khalid, what I meant about nut addition to the dough, was the suggestion of Leader and other to add them (all) "during the last 2 minutes of kneading". At first, of course, I followed these instructions, and found it so hard (kneading in a mixer) to incorporate the nuts into the dough. They would forever stay at the bottom of the bowl, turning around and around, even with the large Hobart it takes a while. It's so much easier to feed them slowly into the running machine, and they get more evenly distributed.

The same experience I had with olives, even when I hand kneaded them into dough, they tended to fall out again, pop through the dough, and made it really hard to incorporate them (I didn't want to squish them either). I solved that problem by draining them hours before using, drying them thoroughly with paper towels, and then feeding them slowly into the dough.

I agree that with S & F it's a bit easier to incorporate nuts or olives, but I use S & F only for smaller batches, not for my commercial baking. And there, also, nuts have a way to fall out of the dough again, instead of staying put.

No sensual dough slapping in this household - though my husband still has his suspicions about The Other Man...

I was, also, very pleased about the open crumb in this mostly whole wheat bread. And I love nuts in bread, whether walnuts, hazelnuts or pecans - unfortunately hazelnuts are so expensive here in Maine, otherwise I would use them in the breads I sell more often, too. But my two little hazelnut shrubs are growing, one is already 30 cm high (!), I anxiously monitor their well-being, keeping an eye on my husband and suspicious lawn mowing activities - and, maybe, one day we might have a crop.

the horribly over looked and under utilized pistachios.  They never hurt nobody either.  I try sneak them in everywhere but always get caught because they are unmistakable :-)

Your walnut bread is luscious and striking - a fine combination.

Thanks for the reminder, you are right - I like pistachios, but usually think more in the line of ice cream or pastry.

That's a beauty, Karin!  Can't go wrong with whole wheat and walnuts.  This is still one of my favorite bread books, warts and all.  Great Bake!

Haha, Marcus - you nailed it. Which bread from the book is your favorite?

That's too hard a question!  Even out of the handful I've actually baked I couldn't pick one over the other.  Then there are the breads I probably won't ever bake but keep going back to for inspiration... too many to choose from.  That being said, the pretzels were a hit, the Polish cottage rye turned out really well.  I seem to remember the miche and pain au levain were both great, too.