We are invited tonight to a Burns Night supper - long-running, we've been going for years!  I thought this time I should try to take some bread (though I wasn't confident enough to stop them buying bread - must be more confident!)

I recently purchased Bertinet's Crust, and Hanseata (I think) mentioned the Breton Bread, so I thought I'd give that a go, as unusually I had some fresh yeast.  As this was a new recipe, I decided to also do DSnyder's Pugliese as usually that works really well for me.  18 people so it felt like a big quantity was required - so I did around 2kg of each, which was a fun experience in itself, as I've not done these volumes before!

I thought originally the breton bread would be fairly quick, but the pugliese also went really fast - so I nearly ran out of proofing baskets!  As it was, I ended up doing 3 Breton and 2 Pugliese - both the Pugliese in the La Cloche, two of the Bretons on a stone with metal lid and the other in La Cloche 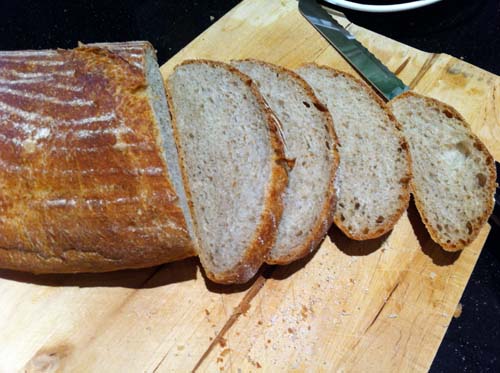 The Breton didn't rise as much as I'd hoped, even in the La Cloche - but I guess there's quite a lot of buckwheat in there!  I did bake it when I thought it was just about ready - so a bit quicker than planned...  Quite a thick crust (this one was under the metal lid), pleasant taste, went well with eggs this morning...

Not sliced the Pugliese as both are going down to the dinner, but it rose beautifully (as usual) and I hope will taste good 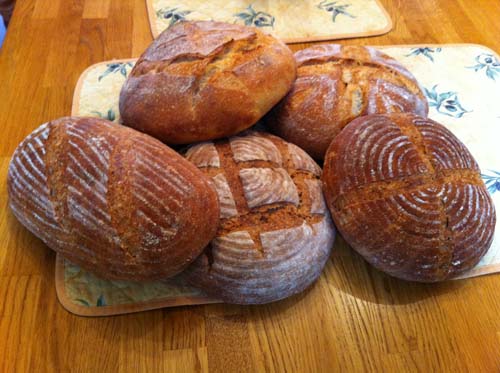 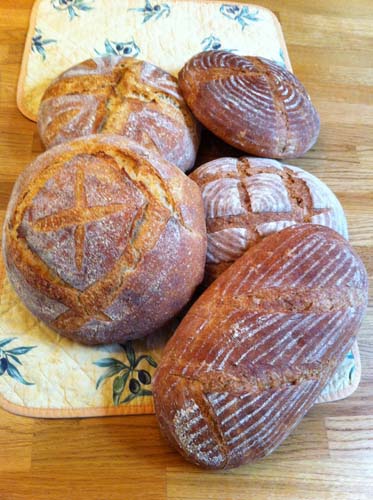 Challenges of timing - the Pugliese went a LOT faster than I expected - so rather than my usual proof overnight in the fridge, I baked them all the same day.  Luckily I have two ovens, so one had the stone and the other the Cloche!

Will see what the reaction is tonight
cheers
S

They all look absolutely beautiful!  A far cry from the days of cow pats! :p

Look forward to the reactions of your fellow diners tonight.   (though I bet it'll be great!)

Those are some good looking loaves, I expect everyone enjoyed them a whole lot more than the haggis :) .

Look forward to meeting you again in February.

Lovely loaves! I hope they went over well at your supper. Enjoy the haggis!

They did go down well - next year I'll have the confidence to tell the cooks not to buy Tesco french sticks!

They were appreciated, as was the haggis and our "speeches" (a skit vaguely around a missing dinner scene from The Scottish Play!)