German Many Seed Bread from WGB

German Many Seed Bread from WGB

This bake was triggered by Karin's tease bake here. The recipe is from Peter Reinhart's Wholegrain breads. The bread is an enriched bread that contains lots of seeds, such as sesame, flax, sunflower, and pumpkin seeds (i used crushed walnut instead).

The Bread is also 100% Wholegrain, and contains Rye flour too. I mixed all the ingredients on day two ,but the seeds, as they tend to hinder the development of the dough. When the dough was coherent and moderately developed, i added the seeds and kneaded for a while longer.

Added by edit: I accidentally re-read the recipe again today, and found that it actually is 50% wholewheat as the biga is bread flour. So, my bake isn't really the transitional one in the book. Anyway, who cares? The bread was spectacular! 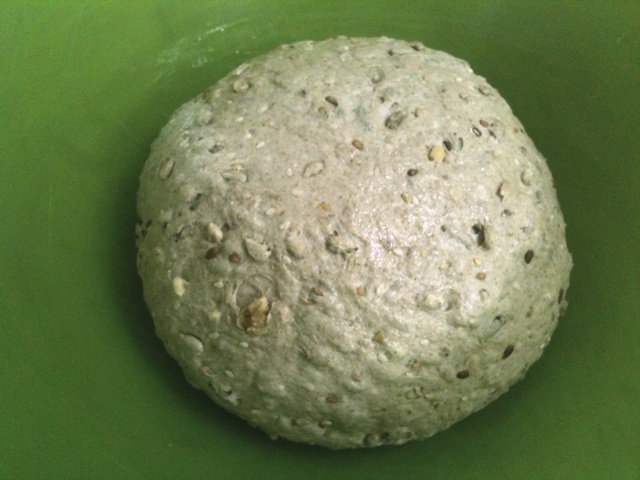 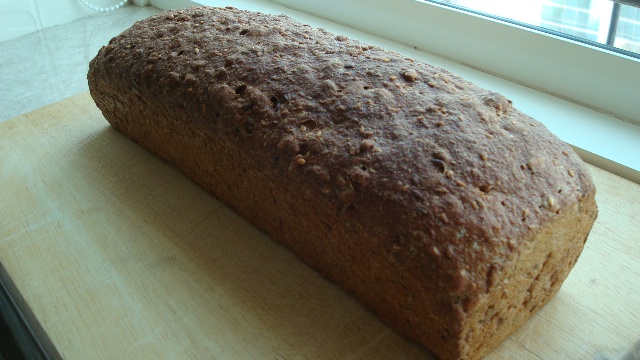 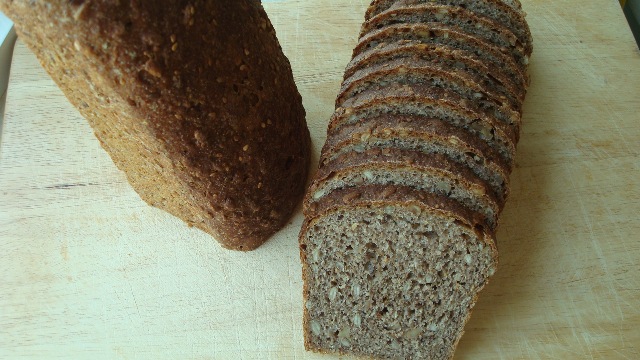 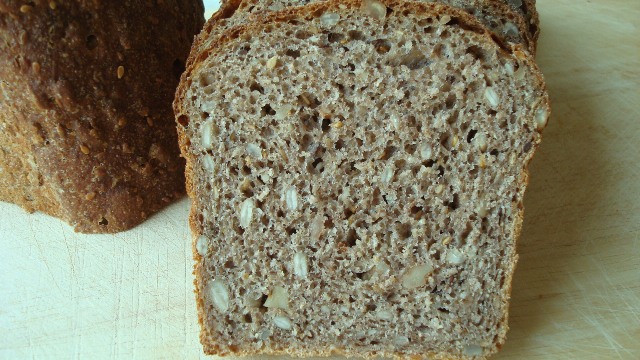 This Bread was SO popular with family, it was deemed to be the Best tasting bread i've baked!

To me, it was a really nice nutty bread, that is sweet, wholesome, and healthy. This is one of those breads that is best consumed alone, with no topping whatsoever, save for some butter.

This bread is extremely recommended! Thanks for the reminder, Karin!

What a beautiful looking crumb Khalid,

It's no surprise your family liked it so much ... Does it contain any sweetner?

How finely crushed were the walnuts? ... I like that idea. Great to see you baking so much.

That looks a wonderfully tasty loaf.   For 100% wholegrain with nuts and seeds, and baked in an over-sized pan, as you note...fantastic!

Thank you, Phil! Your seeded loaves were an inspiration, too.

Yes, the recipe calls for 2.5Tbl of Honey. As to the Walnuts, i had a few kernels in a plastic bag, and pounded them with my hand into fragments.

Khalid, this looks and sounds wonderful. Beautiful crumb. It sounds like your family shares your taste for wholegrain richness. I'll have to try this one myself. Thank you.

I would love to try this without commercial yeast, except maybe a little bit in the final dough.

And maybe I can even incorporate some old starter as an added bonus?

I'm always a little nervous about transforming a recipe to an all natural yeast preparation.

Any suggestions how to go about it?

I bake PR's recipes a lot and his bigas can simply be replace by sd - he has the amount needed in the front of his book 'Whole Grain Breads'.

If you don't want to use any IY, he usually has you add some in the final dough to speed up the final fermenting time since the dough has already developed a lot overnight, you can simply leave that out.  Just figure in a longer fermenting time.

Beautiful loaf!  His seeded one is one of the few I haven't tried yet but after seeing your outcome I will have to give it a go.

I have baked other seeded doughs...just not his...not sure why....guess I needed a little extra push and your post has provided that push :-)

Thank you, Janet! I'll have to try the sd biga someday.. Thanks for the reminder.

Pls. Do note that I have used 100% whole wheat instead of the recipe's 50% bread flour.

Beware though, This bread is very addictive!

When I started baking almost 2 years ago I used PR's WGB exclusively.  I WAS NOT going to delve into sourdough baking.....but after a few months of using his method I found myself using sd instead of the bigas....The transition was soooo easy to do because of how his recipes are already written.  I don't think I would have ever tried sd otherwise.

Now I mostly use sd with the breads I bake....and I owe it all to that man who wrote that book using whole grains only...  :-)

TFL has helped me learn even more ways to bake using my grains and I always love seeing what you post!

I made this bread last week and gave the loaves to friends.  I was talking to one of the people I gave it to today and she LOVED it!

I did make it with a wild yeast starter and it turned out really well.

It is now one I know I will bake again.

Thanks you for the post.  Without it I probably never would have tried making this bread.

Thank you so much Eric! Pls. Do bake One.

Hi Khalid,
Your loaf looks so good (all of the good things in that crumb!), and so did Karin's.
I'm going to try to bake some of this bread, this weekend.
Thanks for this post - those slices look amazing.
:^) from breadsong

that was a big hit with your family.    Wonderful baking!  -Varda

I'll have to try that one.

Thank you, breadsong! I'll bet yours will look neater than mine.

Hi Khalid,
That is so kind! of you to say, but I think your loaf is just beautiful with is open crumb and even distribution of seeds.
The loaves are out of the oven now; I made them as you did with whole-wheat flour in the biga, and with a few chopped, toasted walnuts thrown in; but rolled the loaves in sunflower seeds (was thinking about Mr. Leader's gorgeous! Dreikornbrot, from his book, Local Breads).
I tripled the recipe, scaled at 950g for each 8"x4.5" pan, with a little bit left over.
(The extra dough I fit into mini-bread pans, scaled at 66g each. Might be fun to make 'dinner rolls' this way sometime! I sliced one of the little loaves in half to show the crumb - not as nice as your crumb :^)   ). 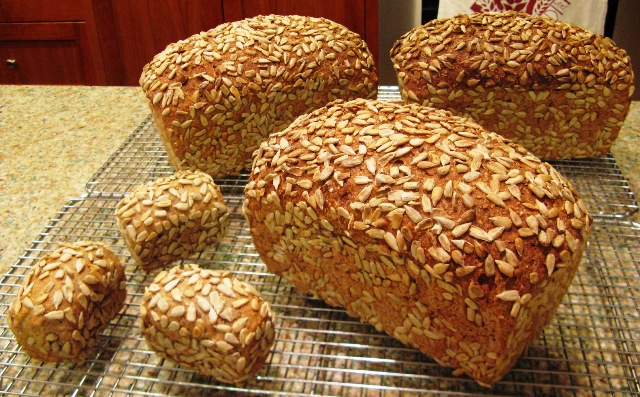 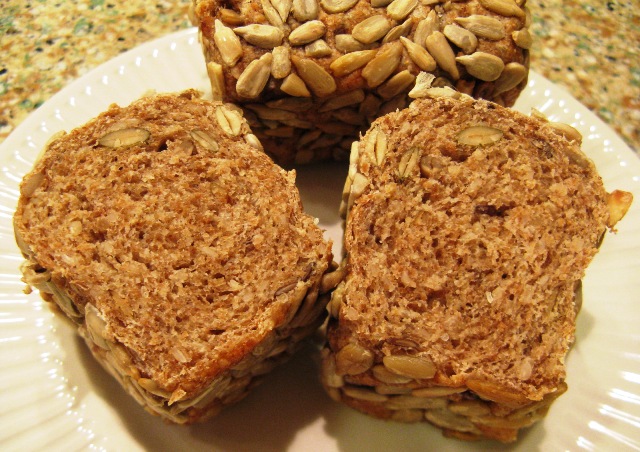 You're right, Khalid, this is lovely-tasting bread and I'm so pleased with its soft texture; thanks for pointing me in the direction of this recipe!
:^) from breadsong

Thank you ,Varda!  Seeing is only part of the story, the bread is very aromatic, and packs tons of flavor. I bet the SD version in the Biga will taste even better, yet less sweet.

Khalid, that is a great looking loaf and a very open crumb for a 100% wholegrain.  Looks delicious and I am not surprised that your family deemed it your best bake ever.  Now you have a clearer direction on what they like. Nice baking. :)

That is a fantastic loaf Khalid!  I always wondered why that particular bread was only presented as a "transitional" formula in the book.  Great to see it made with 100% WW.  Delicious!

That looks just delicious! And highly nutritious, too! Home artisanal baking epitomised (and there's no higher compliment than that, as far as I'm concerned).

This is one of my favorite breads, I make it a couple of times every month (generally whenever my 100% rye starter is due for a feed). I love the seeds on the outside, I'm stealing that next bake...

Wondering if you use a 100% rye starter when baking this bread or if you stick to the 11% total rye % and make up the difference with a ww starter?

As the recipe is written the biga is made with bread flour.  The rye is in the soaker but I am thinking you are simply adjusting where you put it but not sure if that means you are simply using 57g of rye starter and approx. 310g ww starter to get the total wt for your sd?

Can you give a bit more detail here?

I use 14 oz of 100% hydration rye starter in place of the WW biga. I either adjust the hydration when I feed the starter for it if I remember, or decrease the water elsewhere.

Thanks for explaining :-).  I will have to try both ways now that my family is beginning to like seeds/nuts in their loaves.

As to the even distribution of seeds, i mix entirely by one hand, with the assistance of my trusty bowl scraper. I also mixed the dough first, developed it , a then added the seeds. I like to mix and knead by hand and i plan to make my hand messy. I believe that the hand is a unique tool in many ways, especially when it comes to giving warmth to the dough. I mash the ingredients between my fingers until the dough develop slightly, then turn it to the counter top, with no flour, no water, no oil. I start slaping and folding it until i see a slight membrain forming I then rest it for 5 minutes (crucial), and then add the seeds untoasted.. (toasted seeds will tear gluten), and continue mixing in the conventional way (slap and fold will set the seeds on a trajectory path across the kitchen!).

Hi Khalid,
Thank you for your kind words, and for the advice re: toasting seeds - I will keep that in mind.
The seed garnish added another nice layer of flavor to the loaf.
I had a few 'escapees' trying to knead in those seeds and nuts by hand; can't imagine what would have happened
with slap and fold!
:^) from breadsong

I guess I nailed the final proofing time on this bake! The loaf was quite delicate due to all the seeds and hydration. My family is appreciating wholegrain baking now more than ever. WGB is a great book from a great author.

Thank you, Marcus! True.. i'll bake it with 50% bread flour to compare.

Thank you very much, Ross. I guess the beauty part goes to Breadsong's Loaves. My crumb plus her crust should be interesting.

That is a great compliment, Ross! i don't know if i deserve it, yet!

What a nice suggestion! you mean with a Rye Biga? Stored in the fridge, as is the case with WGB breads?