I hate durum wheat. One moment it seems it doesn't want to stop absorbing water and few seconds later you find in your hands an unmanageable paste.

I've been trying to bake a decent durum wheat loaf for several months, and after countless failed attempts finally I obtained (twice in a row!) something satisfying.

Rather than using preferments (that always made matters worse for me) I prepared a straight dough with this ingredients:

I used the bread machine to knead the dough, starting with 350 gr of water (with the starter dissolved within) and adding the remaining liquid in tablespoons.

Reading a description of the disciplinar of "pane di Altamura" I decided to follow the instructions (only in part, of course, or I wouldn't be myself :-) ) and rather than using a no-knead method I kneaded extensively for 30+ minutes.

After the first fermentation I gave two sets of double folds and proofed for 2 more hours, than I scored the dough 1cm deep and finally baked the bread. This one was baked at 185°C, the former one (maybe a bit taller) at 230°C, in both cases starting from cold oven.

I'm satisfied both by the soft crumb and by the intense taste.

The more I deal with durum wheat flour the more I'm convinced that you have to overknead it to make it develop the little and poor gluten it has.

Another specimen tamed, with a different recipe based on the disciplinar for Altamura bread. 70% hydratation with 20% additional biga and 1% dead yeast (it supposed to release the anti-oxidant glutathione, not expected in the dusciplinar).

The consistence of the crumb and the taste of the bread are exactly like that of Pane di Matera, the less know twin brother of Pane di Altamura.

Such a wondeful crumb for Durum Wheat flour, Nico! I read on TFL that durum flour (true durum) is temperamental, and can get overkneaded sooner than one might expect, seems not to be the case in your flour. Interesting ..

Then again, i understand the rationale behind your intensive mixing, as your dough hydration is 80%! Have you tried cutting back on hydration, autolyzing... and then observing the dough's need for further water after the autolyze? I suspect that you're better of reducing hydration to 70%, autolyzing , and then kneading only slightly, as durum tends to develop very fast.

Thanks for appreciation, Khalid. Yes, i tried every imaginable combination of hydratation and techniques: autolyze, gentle mixing, adding water incrementally, retardation... but I noticed that every time I prepared a firm dough (with < 70% water) the bread staled even just the next day after baking and the crumb wasn't as open as in this last loaf.

a biga or a poolish, a small portion of dough that you prepare with a part of the flour (and water) to wake up the yeasts in the starter and make them come back to full activity.

Truly excellent looking crumb on this loaf Nico! I know what a "beast" durum can be from my own trials with it so congratulations for getting the upper hand on it with this bake.

It may be a case of different strains of durum and quality of gluten in durum between European and North American durum, but so far I've never run into the hydration problems during mixing you mention.  The most notable aspect of durum flour I've encountered so far is how rapidly it ferments. I found my best sucess with keeping the dough temp slightly lower going into bulk ferment, and then doing folds every 30 minutes to  build development slowly, but also to regulate the fermentation temperature. I've never used a bread machine so I'm not familiar with their mixing action, but apparently the 30+ minutes you used (which surprised me!) was just what the "beast" needed to tame it into submission.

your advices were very useful! I agree that just like for manitoba flour the durum wheat grown in North America may have different characteristics from the durum grown in Italy; it wouldn't be remotely surprising. Yes, I verified that keeping a moderate temperature helps a lot to control fermentation; it may really make the difference between a well-proooved and an overprooved dough.

I find the bread machine particularly useful because it helps to develop gluten even when the dough is made of "difficult" flours: my planetary mixer doesn't even catch the dough with the hook because it sticks at the bottom of the container! instead the BM has a wheeling paddle at the bottom that inevitably catches the dough and kneads it without problems.

but tell me did you really mean 20 grams of starter?   That seems like too little.   I agree - durum is a beast but I think you've got the upper hand.   I just managed to buy a more refined durum than the one I've been baking with.   This one is marked Atta and also under the Golden Temple logo which is what I've been using, but it's a different grind and I am excited to try it especially after the results you are getting.   -Varda

just 20 grams of rye starter were sufficient. It had been sleeping for 6 days in the fridge, I didn't even refresh it before using it. Overall the fermentation was long, somethig like 10-11 hours. Thanks for your comment!

This is really interesting.   Ordinarily one would expect the energy imparted by intensive mixing to have a noticeable impact in braking down the dough structure more rapidly to create essential extensibility in a short space of time.   This would be combined with high levels of yeast to ensure rapid gas production.   You have a combination of both going on here; low yeast activity to necessitate long and gradual fermentation, but high levels of dough develpment.

But the rye sour has to be regarded as a pre-ferment, surely?   Otherwise your dough wouldn't have risen at all.

sometimes things work out unexpectedly, sometimes even totally reversed to expectations (especially if there are my hands involved :-) ). Yes, in this case the preferment is my ordinary rye starter. The thing I love most in rye is how well this starter behaves even when it lies forgotten in the fridge for days. 100% reliability!

except for the long knead.  After picking up hints like "ferments fast"  and "unmanageable paste" "temperamental" and thinking about Ford's glossary list in Dave's TLA topic.  In the list:

Have you tried any of these tricks to tame possible rampant enzymes?

I like the way your loaf came out.  Beautiful!

evidently show up, even though my "roots" are not exactly rye-related :-)

Yes, I added some form of scald to some of my durum experiments, but only when I used a no-knead approach. Next week end I'll try to add the scald #2 (made with rye) to the long-kneading method I used for this bread.

Thanks Mini and I have to thank txfarmer for all his threads on the importance of a good gluten development, too!

I updated the first post with another specimen done with a different recipe.

I don't ever think I've seen a loaf made with that much durum that looks like that?

Could the rye starter and/or butter really change the crumb that much? And the crust too. It's really dark, darker than anything I've ever seen out of a bread made with that % durum.

Do you trust your supplier? Or is he selling you something that isn't durum?

I have no other choice than trusting the few suppliers I have, unfortunately, but it's really durum wheat, this is certain. I know that there are cultivars with a more yellow hue (australian durum is particularly yellow as far as I know), but the  color is also due to duration  of the kneading: the more you work the dough the more caretonoids oxidise and lose color, resulting in a paler crumb.

The last bread I inserted didn't contain fats and rye: just a biga made from a durum wheat starter. The darkness of the crust may be due to the 10 gr of malt... or to the duration of the baking (1 hour).

I had a lot of problems with it myself when I was trying to craft the Pane di Altamura.

I finally realized that the milling of the durum flour, which comes in very different grades from "almost powder" to "almost sand" made a big difference in how I worked the dough and for how long.

It's worth the effort, though; makes some wonderful breads. (That said, I don't think I ever made one that looked quite as light as what you've made here. I wish I could.)

If you have 8 minutes, this is a neat video on how Pane di Altamura was made in ages gone by. There's quite a bit of helpful technique in the video, at least if you plan on tackling the beast that is the Altamura loaf.

There is so much conflicting advice on how to handle all-durum doughs, but your loaf sure suggests whatever you did works ... for you, with that batch of flour.

I have a new bag of durum from a different source than I've used before. One of these weekends I'm going to make the Altamura bread again with the new flour and see how it behaves.

This all reminds me of Pat's "Sometime you gets the bear ..."

I like the bold bake and dark crust, Ive been fearful to let mine get very dark. Very interesting to see the different tracks people are taking with Durum. Did anyone else notice, from the youtube video, the final shaping/degassing as the dough went into the oven?

Thanks, David. I'm glad to read your comment. Yes, there's not one single way to handle those kind of flours, only practice leads to a confidence with the dough.

Thomas, I saw that video long time ago, but I forgot it. There's one thing that impressed me: the dough is much firmer than the dough I get, they had a consistence that I get only  with 60% or so hydratation. Watching the shaping I guess that the only thing that didn't change is the tenacity of durum wheat.

Jcking, thanks to you, too. That shaping is typical of Pane di Matera.

An interesting thing I noticed is that -with the exception of wholemeal durum- the protein percentage seems to be actually a reliable indicator of the flour strength, a characteristic that in my opinion doesn't apply with other grains.

Can someone post pictures of the durum wheat flours you have available? I'm curious to see the difference in yellow hue. Thanks. 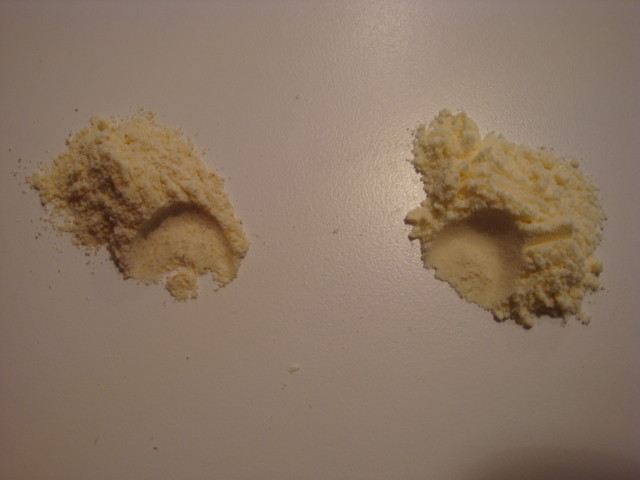 King Arthur Chakki Atta on the left, King Arthur Durum on the right, about 2 tsp of each.

Atta seems to be a bit darker and both are yellower than all durum flours I handled. Does the dough lose color when worked for long time?

The Atta is darker because it is more of a whole grain. How much? I don't know. If I could have taken a macro shot you could see that the Atta is slightly courser. As a bench mark I've used Leaders directions, Local Breads, (some what) and have been kneading at low speed in the mixer (4 min mix first speed Cuisinart stand mixer, rest 15 min, knead speed 3, 5 to 7 min) with 3 stretch and folds or with a rolling pin - hand mix 2 to 3 min, rest 15 min, rolling pin 5 min, repeated 3 times, then same stretch and folds (the hydration in critical, if too wet you can't use the rolling pin). I imagine if I raised the mixing speed the color would lighten, yet with my mixing the yellow remains.

I'm doing SD bagels today with the Durum and will post.