After some nice feedback and advice from Syd, I mixed up another batch of the 25% WW bread formula I've been working on.  My only (very small) complaint about the last boule was the crust.  It just didn't stay "crunchy" for long.  As a matter of fact, it lost all of it's crispiness while it was on the cooling rack.  This, I was told, was caused by not driving off enough moisture during the bake.  Turns out that I may have done a couple of things to contribute to that...

This batch was exactly the same as the last one i.e., ingredient weights, mixing speed, kneading time, overnight retarded bulk fermentation, etc...  However, I paid particular attention to the proofing of the dough after forming it into a boule.  Every 5 minutes I did the "finger proof test" while the oven was pre-heating so the oven would be ready (this time :) ) when the dough was ready.  I was able to see / feel the changes in the dough over time.  At around 20 minutes, (after poking my finger in the dough) it sprang back slowly while still leaving a small indentation.  This must have been just right because the oven spring for this bread was even better than the last one (that I thought I over proofed a bit).

I also played with the baking temps / times a bit to see if this improved the crust.  I'll get a pic of the crumb up later but I'm sure it's going to be just fine.  I proofed the dough in my $1 proofing basket lined with a textured towel dusted with flour and got some nice markings :)

Make sure you click on the pic to enlarge it  (the iPhone sure does take awesome pics!) 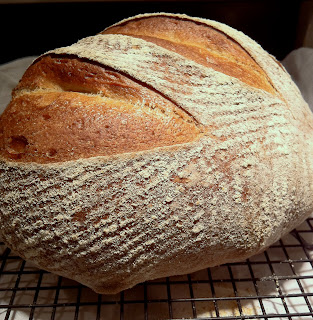 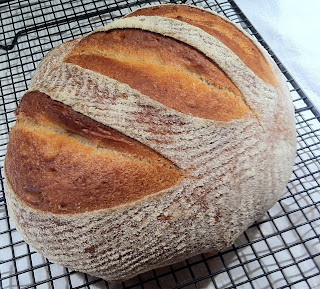 Here's a shot of the crumb...  it's dense but tastes great! 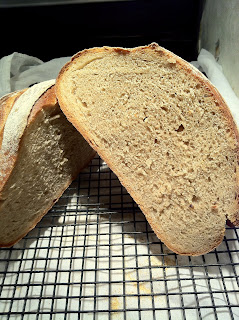 There is a nice improvement in vertical height in the second boule (as compared to your first one).  That is probably due to improved shaping seeing as you kept the hydration the same.

Just when to put in into the oven can be quite an individual thing. I like to under prove slightly to leave room for a fair amount of spring in the oven.  There is something bountiful, exuberant about nice open slashes and tightly stretched gluten that really appeals to me.  It promises good things inside.  That is my personal preference, though.  Others like to have a more controlled/restrained opening of the score marks.  That can be very pretty, too especially when it comes to making patterns/shapes on a loaf.  Breadsong is a master in this regard and you would do well to look at her blog and study her techniques.

The crumb looks quite tight on the small picture, but when you enlarge it, it is actually quite open and quite in line with what you would expect from a 62%  hydration loaf.

Check out both Mebake's and dmsnyder's recent posts on whole wheat. There is some good information and tips to be gleaned from both of them.

Syd, very thoughtful and considerate of you to refer to other TFl members.

Hey Joe! Nice boule, crust, and crumb look quite good! Try to accustom your self to higher hydration doughs (70-75% water to flour), as it is the secret behind good open, flavorful crumbs.

Day 5 of my starter...what 's now?
Florida starter
Hobart n50 used vs new global sp5
How to convert a yeast recipe to a Poolish ?
borodinsky first try - in zojirushi
END_OF_DOCUMENT_TOKEN_TO_BE_REPLACED