Hello,
While visiting Victoria last March, I picked up a book called My sweet Mexico, written by Fany Gerson.
This book is full of all sorts of lovely things, and as I was looking through the book a few days ago, came across a recipe for Alegrias (Amaranth “Happiness” Candy).
The ingredients listed pecans, peanuts, raisins, pumpkin seeds, piloncillo sugar, honey, a bit of lemon (or lime) juice,
and puffed amaranth seeds.
I wondered if I could take those ingredients and make an Amaranth “Happiness” Bread!

Tried to decorate the top with 'flowers',
with ingredients used in the bread: 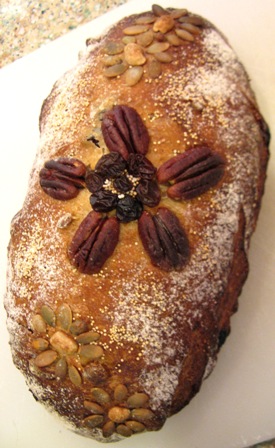 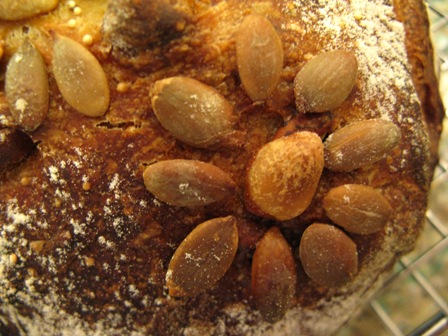 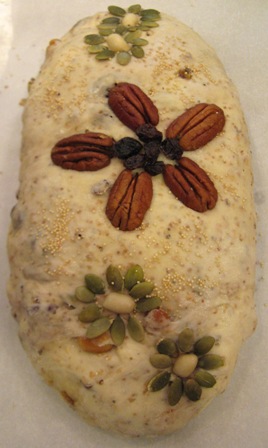 ... a picture taken before baking

Mini posted about Amaranth Starter – it was interesting to read that she thought the starter smelled like corn; I definitely tasted the flavor of corn when I first tasted the bread. The power of suggestion?!

This is how my amaranth starter looked after it had doubled: 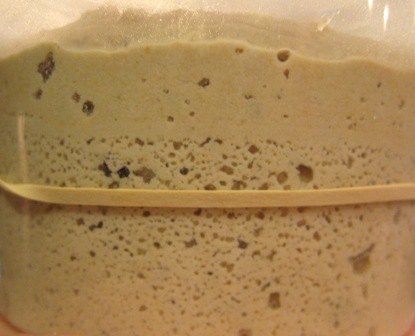 This is the formula I worked out: 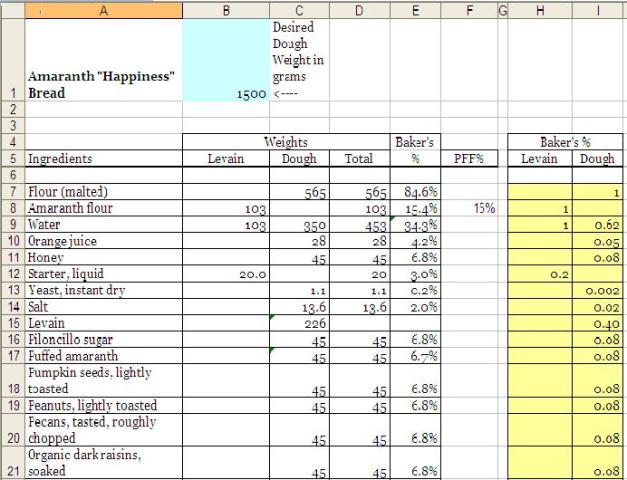 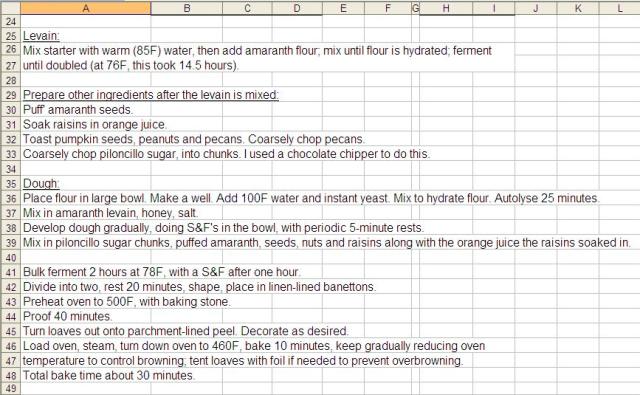 A note on how to 'puff' amaranth (It’s like making mini-popcorn!):   I heated a deep pan over medium-high heat for a minute or two, added 1 Tablespoon of amaranth seeds, which immediately started to pop; covered the pan quickly, removed from the heat, and shook the pan around holding the lid in place until most of the amaranth was popped (‘puffed’).  I did this three or four times, until I’d popped enough for my bread recipe. Keep those amaranth grains moving though - they'll scorch easily in a hot, dry pan. 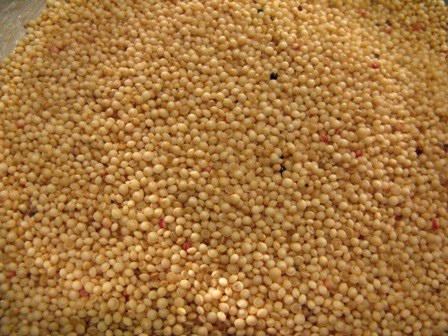 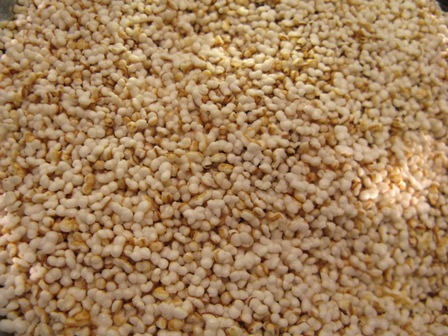 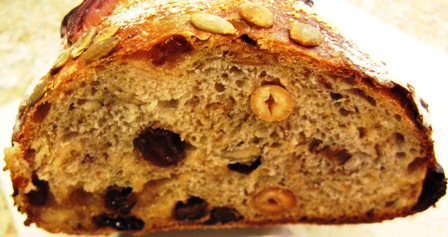 ...the effect of piloncillo sugar: 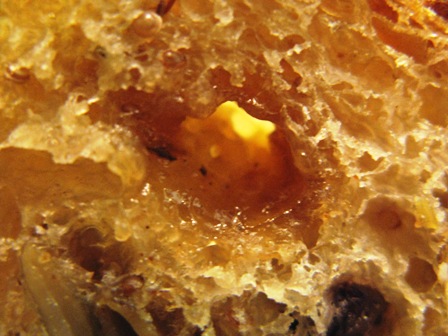 What this sugar looked like in the dough, after mixing: 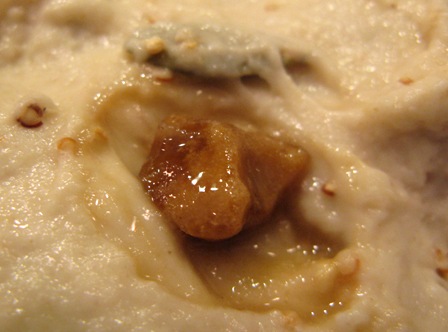 The second bake today is Mr. Hamelman’s Sunflower Seed Bread with Rye Sourdough.
The sunflower seeds within, and crusting the loaf, sounded enormously appealing.
I saw jsk’s lovely bake with this formula today, and there was a helpful reply to the OP from David (thanks David…gave me some guidance re: S&F’s with this dough :^)   ).
I also happened across this beautiful post of Benjamin’s, and inspired by the beauty of that loaf, tried to score my sunflower-seed-crusted bread similarly. My loaf is not a thing of beauty like Benjamin’s!!! but despite my loaf's appearance I am happy with this bread’s very flavorful, moist crumb and crunchy, toasty crust of sunflower seeds! 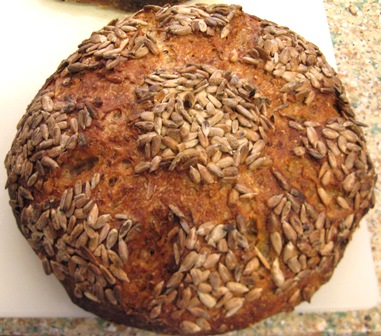 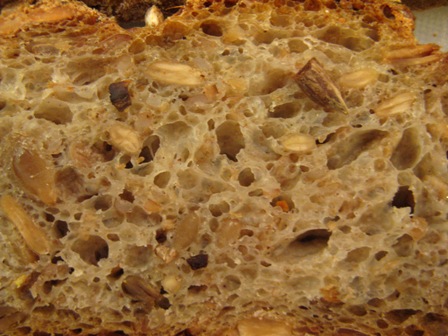 The last bake is Mr. Hamelman’s Rustic Bread, from a week or so ago, trying out a new stencil.
The bread, and some crumb shots: 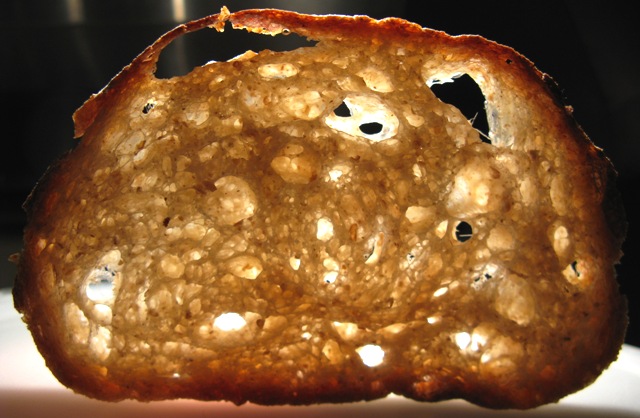 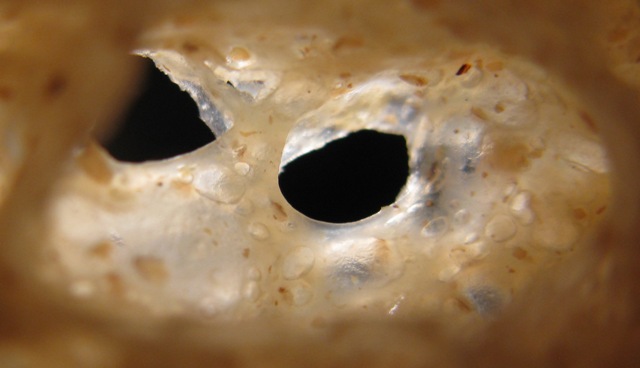 Happy baking everyone!
:^) from breadsong

You're on fire breadsong!

Lovely and interesting work, as always

Hello Andy,
I must thank Daisy_A...she and I have been corresponding and it's because I was writing back and forth with her that I pulled out Ms. Gersons' book - grateful for this inspiration, this weekend.
Thank you so much - I always appreciate your kind words!
As I was working with the pumpkins seeds I was recalling your beautiful rye-and-pumpkin seed pan loaf!
:^) from breadsong

Edit to add: The orange juice in this formula is per your prior recommendation, Andy; with thanks for your advice! :^)

Cute, Cute Amarnath Bread, Breadsong!! It only needed a Pink Ribbon round it's waist :)

All breads look so cute, breadsong! All Artsitic, expecially stenciling. Hope i had enough time to mess with my dough!

Hello Khalid, Thank you so much! :^)
I tried to save some time by placing the 'decoration' (all except the pumpkin seeds) on linen, placing the loaf, top side down over the decorations, then lifting the linen and dough and placing in the banneton. I thought the dough's weight might 'press' the decorations in, making them less likely to burn during the bake.
Re: burning, except for the raisins! this worked out OK. You'll note a different raisin pattern before, and after the bake (I had to remove the burned raisins and replace with some new ones!).
During proofing, though, the patterns shifted (especially the pecans).
Next time, I will keep to a shorter proof, and leave myself a bit of extra time to place the decorations, just before the bread goes into the oven.
:^) from breadsong

Really beautiful loaves of bread, breadsong! You're so artistic, as always.

Not sure if amaranth seeds are available in UK, though I have eaten their young leaves mixed in salad. They look a bit like quinoa seeds, don't they? How's the texture like?

The new stencil design is so gorgeous, you can't call it 'rustique' any more! :p

Hello lumos, Thank you for your nice comments :^)
The amaranth flour I used is a whole grain flour. The flour feels ever so slightly sandy. When incorporating the levain into the final dough, the levain felt quite gritty and it took a bit of effort to combine this levain with the dough, after the autolyse (mixing by hand, in the bowl).
One thing I was wondering about as I mixed in the puffed amaranth, is if any of the unpopped amaranth grains would be noticable in the final crumb, as they hadn't been soaked.
Now that I've had the chance to enjoy some of this bread, the crumb is very soft and so moist! and all of the amaranth (puffed, seeds) blended right in.
I looked back in one of my old bread books (possibly my first bread book?), called Baking Bread – Old and New Traditions, by Beth Hensperger. Ms. Hensperger comments,"amaranth has a rather gelatinous texture" and "adding the cooked grain to batters helps baked goods to retain moisture and lightness".
Given this bread's moisture on the second day, I must agree!
Ms. Hesperger also notes "its leaves and stems vary in color from purple to orange to white".
Wouldn't that be pretty in a salad?!
:^) from breadsong
P.S. Glad you like the stencil.  I found it at a cake decorating store. It called out to me :^)

Thanks for the detailed explanation, breadsong.

I'm even more intrigued by amaranth now, especially the seeds. So the cooked seeds turns gelatinous, a bit like tapioca, maybe?

Yes, amarantha's baby leaves are pretty with scarlet colour, like this.

Recipe for this dish

It's one of those 'fashionable baby leaves/sprouts' which is becoming suddenly popular recently, the sort of things you're supposed to know if you're desperate to make  people  think you're a 'foodie.' :p

Lumos, What a perfectly gorgeous little salad, and a wine pairing to boot :^)
Many thanks for sending this along!
:^) from breadsong

Your Amaranth Happiness bread sounds absolutely delicious breadsong, and of course from your hands it looks lovely as well. You always manage to come up with something unique and interesting to bake, which I think shows a special kind of talent that many otherwise skilled bakers don't have.

The lacy crumb on both the Sunflower Rye and Rustic bread looks inviting to say the least. It looks chewy, moist and everything a good crumb should be. Nicely done! The new stencil I think is the prettiest and most elegant ones you've done so far. Quite stunning!

Hello Franko,
Thank you so much for your compliments Franko...I'm so glad you liked these breads!
The Amaranth Happiness bread lived up to its name, that is to say, it tastes really good and I'm glad the combination of things in it added up to something delicious, and that makes me happy! :^)
I'm a little out of my depth with the rye breads and your comments mean a lot to me, coming from such an accomplished baker as yourself.
The stencil was so pretty and I enjoyed employing it to decorate bread.
Maybe one day I'll get back to making a fancy cake but it's fun to use this stencil for bread in the meantime!
:^) from breadsong

Thank you so much, codruta! :^)
I appreciate your kind words very much!

You seem to get inspiration everywhere and then transform it into the most stunning breads.   Your decorations with nuts and seeds are just beautiful.   -Varda

Hi Varda,
Thanks so much!
I may be spending too much time thinking about bread and ways to make it/flavor it?!
I'm so glad you like the decorations. I'm glad the pumpkin seeds retained some of the green color.
I saw a photo spread in Martha Stewart Living magazine years ago that showcased flowers in various shades of green, and I fell in love with those green flowers!
:^) from breadsong

Beautiful, baking breadsong.  Had to google amaranth to find out what it is!  You learn something new everyday here.  Lovely decorating and very creative baking.  The puffed amaranth looks like puffed rice.  Very interesting!

Hi Syd - Thanks so much for your nice note!
Never thought about making puffed rice before - wonder if that can be done at home -
something for me to google, to try find out!
:^) from breadsong

breadsong! I am speechless. I am so glad I met you at the Kneading Conference. You are going to be a great source of inspiration for me!

Hello MC,
It was an honor to meet you at the Kneading Conference and and to receive this compliment from you!
Thank you so, so much for your comment...it means so much to me...
I've been so inspired by the beautiful breads you have created and thank you for all that you share on your blog.
:^) from breadsong