A photo tour of the NatureBake bakery

A photo tour of the NatureBake bakery

I've been meaning to post about Dave's Killer Bread for some time and was inspired to this week by having a chance to go down to the NatureBake bakery, meet Dave in person, and get a tour of the bakery.

Dave walked me through the full process from ingredients to mixing and baking to slicing and shipping.  I tried my best to take notes and photos that I thought would be of interest to folks here.  Though the scale of what they do in a bakery like this is so much larger than what we do at home, there were a number of times I found myself thinking "Hey, that is just like when I..."

The NatureBake bakery where Dave's Killer Bread is made is literally directly across the street from Bob's Red Mill. 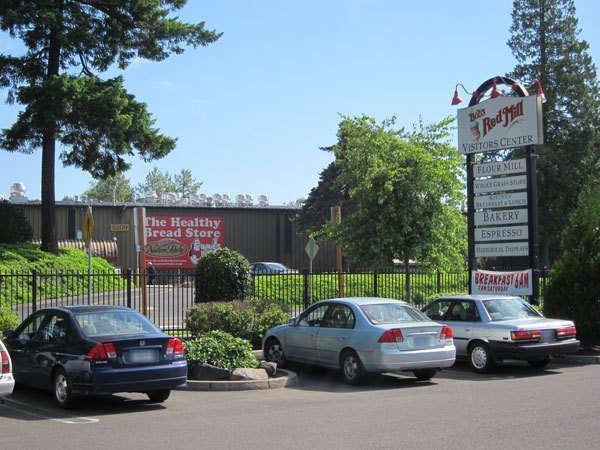 As you can imagine, being that close to Bob's Red Mill comes in handy for a bakery that specializes in whole grain breads.  In the NatureBake warehouse they had pallet after pallet of Bob's Whole Wheat Flour. 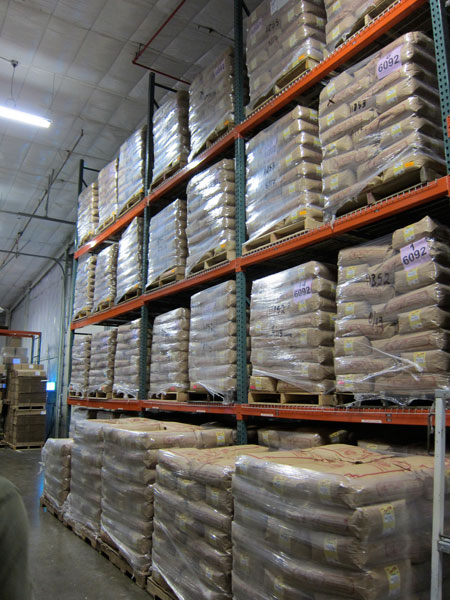 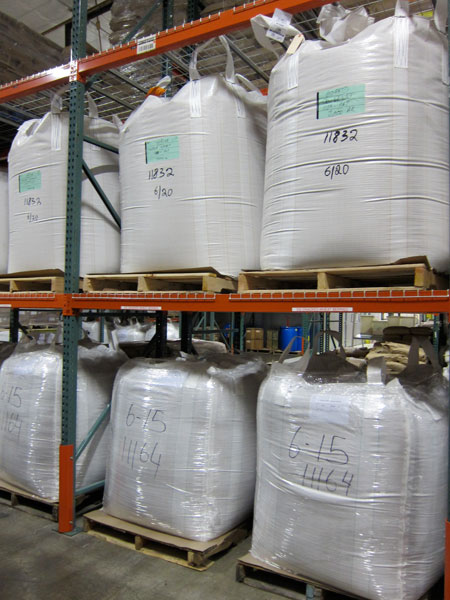 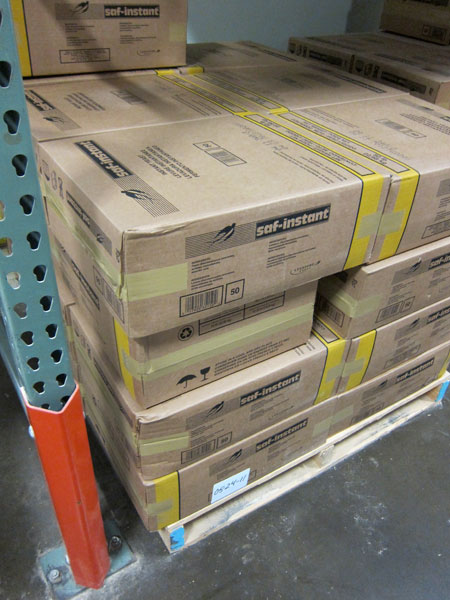 Talk about a celiac's nightmare.  Look at all that gluten. 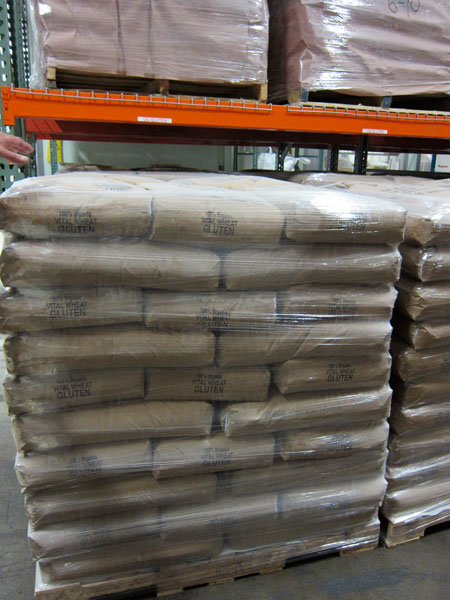 Dave told me that prodigous use of vital wheat gluten is critical to pulling off loaves like his, loaves that are chock full of nuts and whole grains and yet still relatively light.  When I asked Dave if they had any plans to get into gluten-free baking, he said for the time-being no because of the tremendous logistical complications involved in setting up a gluten-free production line.  He also pointed me to a video he recently posted in which he discusses the nutritional benefits of gluten.

That crack wheat stored in those massive white sacks is soaked, sprouted, ground, and mixed into many of their loaves. 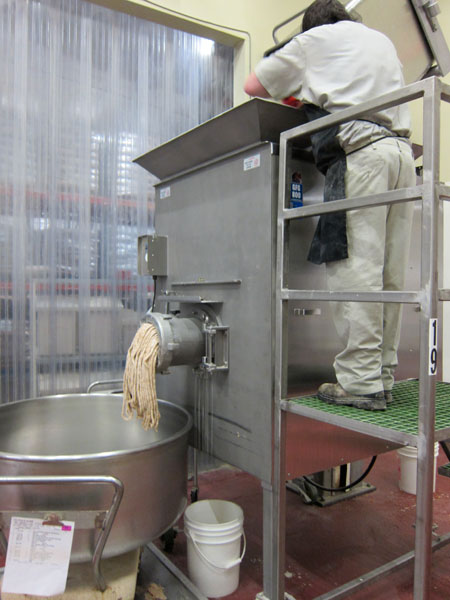 Dave checking one of the doughs with the windowpane test. 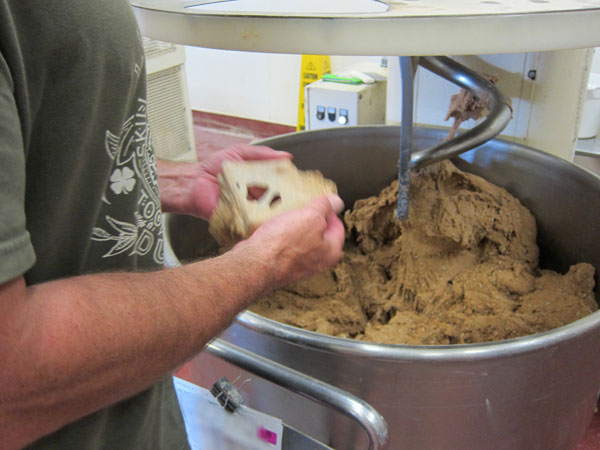 The bakery was quite warm, probably somewhere around 80 degrees.  Many of the doughs started with a large amount of the water as ice, which melts during the heavy machine mixing. 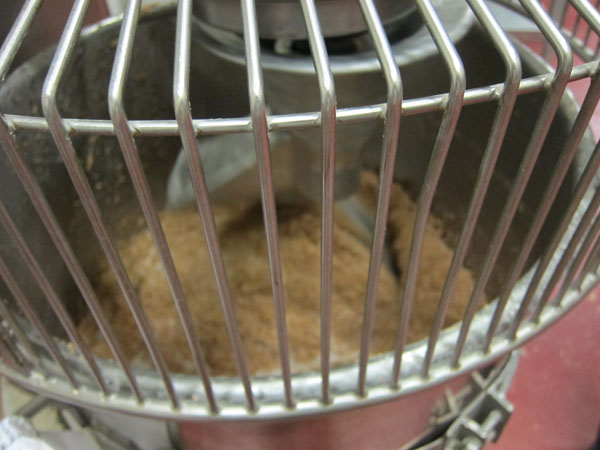 This is a terrible picture but it was meant to show a multi-grain sponge.  Many of Dave's breads contain whole grains and presoaking them is critical to the breads coming out right.  Many of us use this technique at home as well. 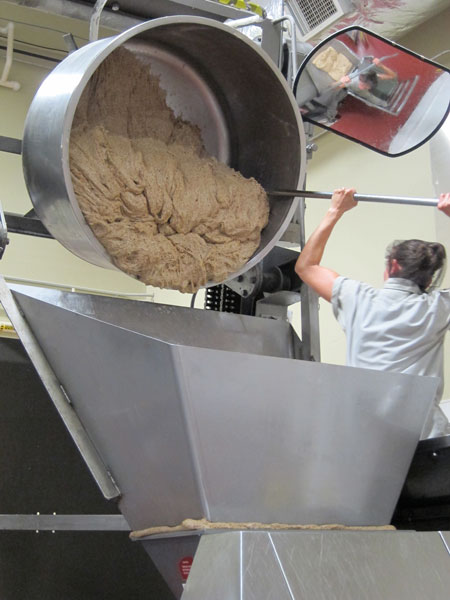 250 loaves worth of dough going into the dividing machine. 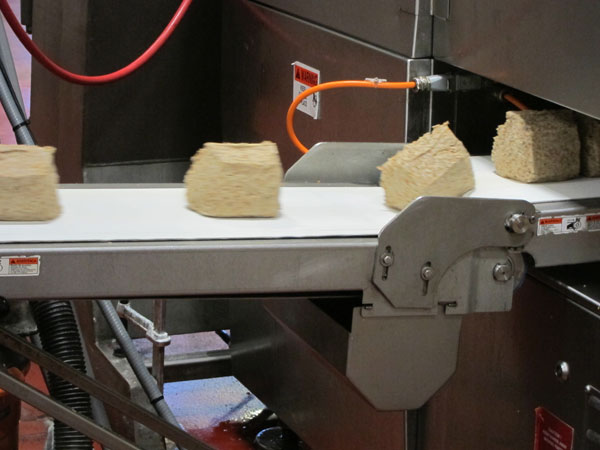 And coming out divided.

The loaves are shaped by machine, then rolled by hand in a seed mixture and placed in baking pans. 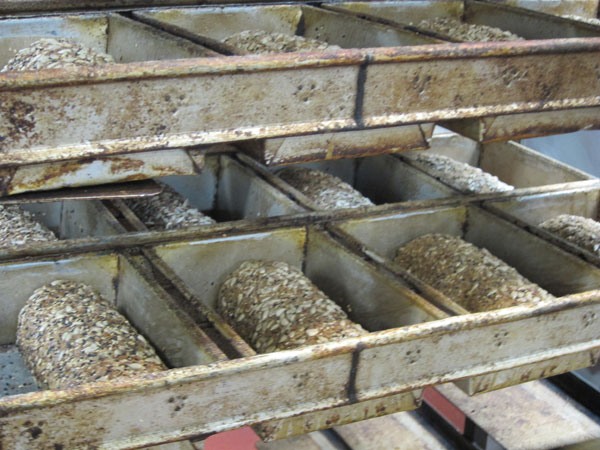 The racks of panned loaves are rolled into steam filled proof boxes.  Once they have risen, the loaves are baked in large rotating ovens. 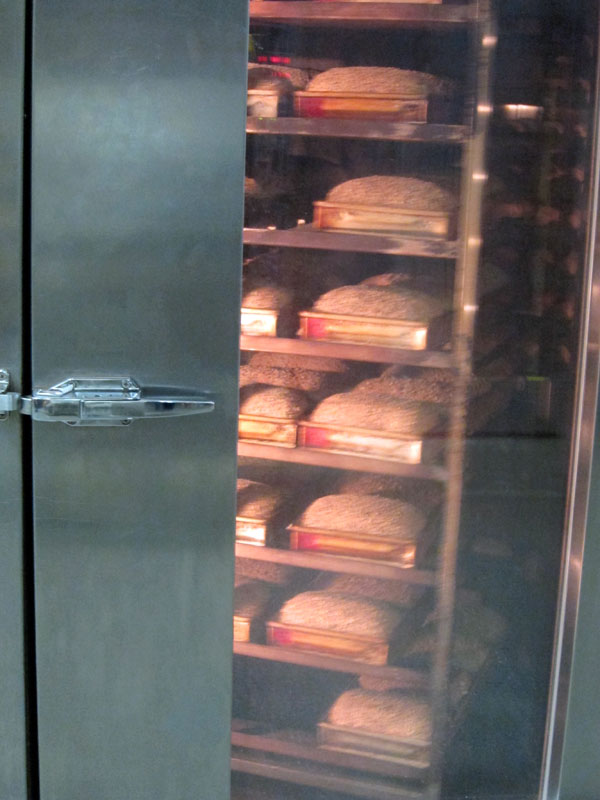 The baked loaves are removed from the baking pans by machine and racked to cool. 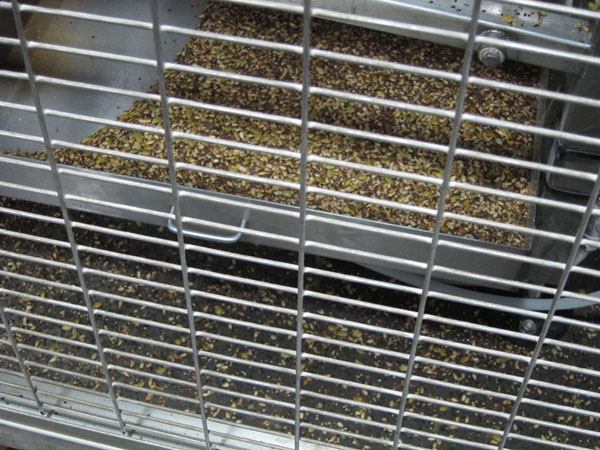 When the loaves are pulled out of the pans, many of the seeds fall off.  Dave told me that they donate this waste to local farmers who feed the seeds to livestock. 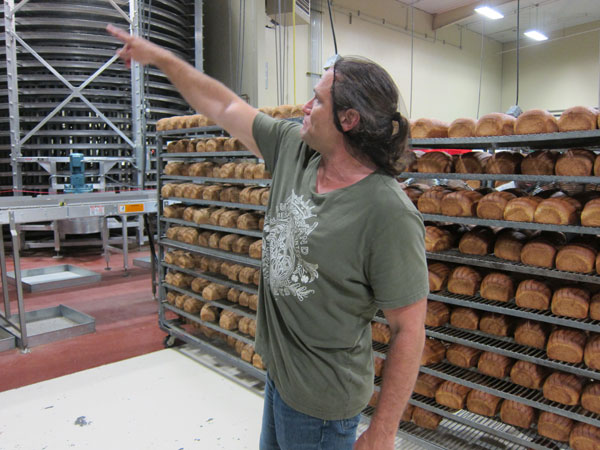 My tour guide Dave showing me the cooling towers, which were really cool. A close up: 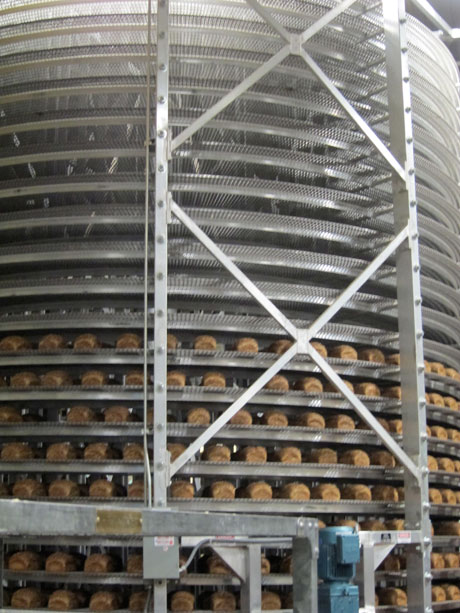 Hot loaves of bread are placed on a slow-moving conveyor belt at the bottom of a tower on the left.  The belt slowly spirals the loaves up to the top of the tower, over to the right tower, and back down.  By the end of this slow moving journey the loaves are cool enough to slice and bag.

I've worked in a bakery before and been in bakeries of different shapes and sizes. Like any other workplace, some bakeries have really good comraderie and others seem like terrible places to work.  NatureBake seemed to be one of the former, with employees coming up to Dave to ask him how his recent vacation went and Dave chatting with them about what was going on in their lives.  Dave also pointed out the "killer cafe" where employees get meals free of charge, a nice perk which I'm sure improves moral.  I liked what I saw there, which is good because I already enjoy the bread they make. 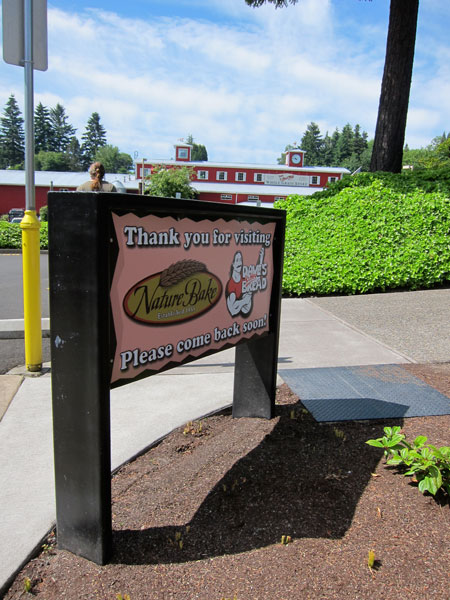 Dave recently gave a similar tour to a local TV station. The video shows some of these machines in action.

Can't help but think of this tune imagining this scale of place!

Hello Floyd,
We were in Portland yesterday; I popped onto TFL before we took off for the day and saw your feature on Dave's Killer Bread.
What timing - I was already planning to go to Bob's Red Mill, and Dave's being right across the street...wonderful!
I picked up two loaves and am so glad I did: we enjoyed 'killer toast' for breakfast this morning! 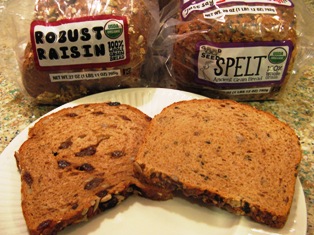 Thanks so much for posting the pictures and video - it was really cool to see the 'behind the scenes' and equipment working.
:^) from breadsong