Tonight's bake..   Here are a couple of 1lb plain white sourdoughs.   Nothing too fancy, just practicing and taking notes of things.  This was a 68% hydration dough, made from 20% liquid levain preferment (125% hydration levain).   KA Bread Flour.   I did not use a brotform or banneton, just shaped and did the final rise free standing.  Tastes great!   I accidentally put them a little too close together in the oven, they joined together slightly on one side near the bottom, but not too bad.

I did a better job at shaping + scoring the one on the left.... 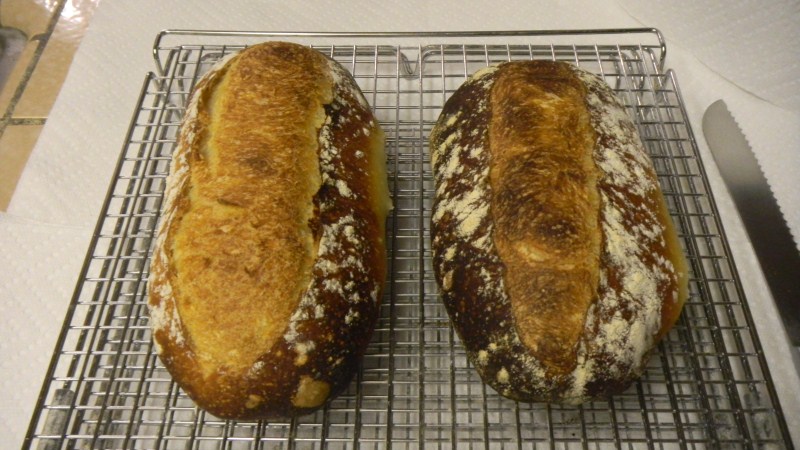 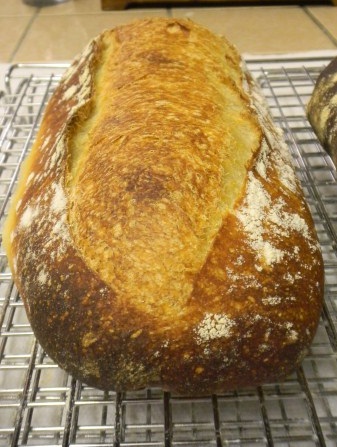 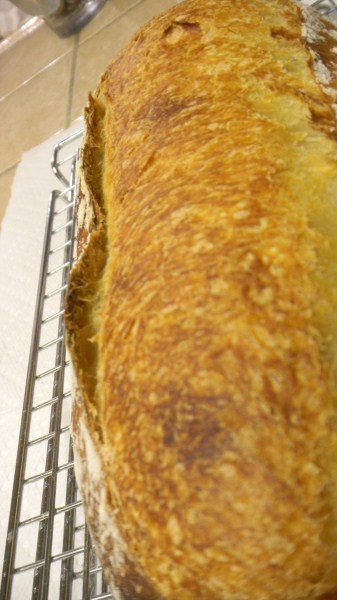 I cut open the lesser of the two loaves, still a bit warm, but wanted to see the crumb. 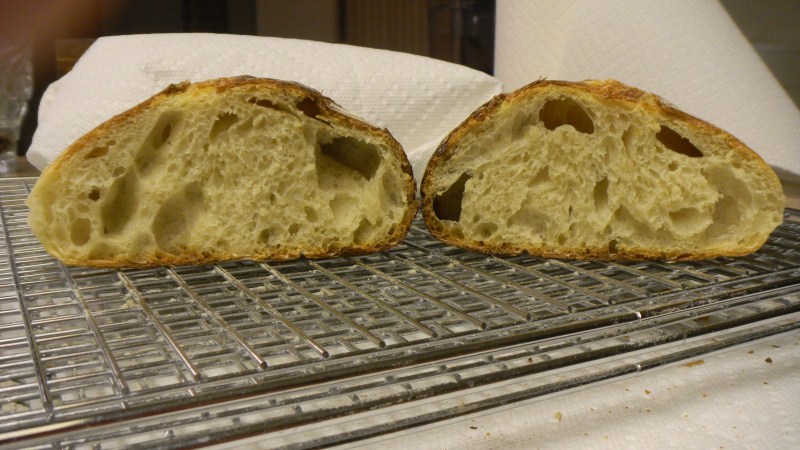 With the look of your slash you've gotten great oven spring and the loaf was put in the oven at the proper time. Give yourself a pat on the back. The goddess Fornax has smiled upon your loaves.

Thanks Mebake and jcking.   This time around, I did use my stand-mixer but only a couple of minutes on the slowest speed ("mix"), followed by the S+F-in-the-bowl every 30 mins for 1.5 hours.  I've been over-mixing my doughs so this time I wanted to use the mechanical equipment at a minimum.  Maybe next time I won't even use it at all.

I then cold-retarded the unshaped dough at 46F for appx 18 hrs... which may have been a little too cold, next time I will do it at 49-50F.  Upon removing from the chiller, I shaped the cold dough and began the final proof, which took 3.5 hours.  I've also had issues with sourdoughs in knowing when they are ready to bake.

Someone here posted a recommendation to take a piece of the final dough and put into a small clear measuring cup during the final proof stage.  Seems like an obvious thing to do while learning but it never occurred to me.  It turned out to be very helpful!   I could precisely measure the final rise and watch the bubbles forming.   Had I not done that, I would have baked them far earlier than they were ready.  I waited until the smaller sample had risen by exactly 50% and lots of little bubbles in it.

It was also clear that proper shaping is really important to getting a good oven spring and loaf height.  It really needs to be tight.  One of these days I'll set aside an afternoon with a practice quick dough and just shape, shape, shape all day.  I'm pretty good with boules but not batards.   Well, cheers!

Little things can add up to help the loaf. I agree about the kneading, especially with sourdoughs. If the dough is kneaded to window pane the dough can turn white and the cartinoids will suffer. Machine kneading to about 80% then stretch and folds works well for me. I'm also playing with flour abrasion during the initial mix; mixing longer helps with water absorption.

I like the idea of the small piece to test the doubling; gonna try that.

I also agree a good shaping helps to retain the dough gases, on the final rise. Check the video section here for some shaping examples. Be gentle and kind to your dough and it will repay you in kind.

Yes, I agree, all the little things must come together perfectly to get a good bake.  I also find with the sourdoughs, they really achieve best flavor after several hours of rest.  I baked those late last night, sampled one while it was still warm, and I thought it tasted great at the time.  Went to sleep, woke up and had some for breakfast, and it is so much better.  :-)

I really like the crispy crust of a new loaf, yet as you say the next day the flavor is improved.

So in my neck of the woods, there aren't any bread-bakeries.  But, across the street from where I live, there is a small pastry+cake bakery, independently operated by an educated, trained baker lady.  I've been in there a few times for breakfast pastries and things.  We got to talking about breads, good breads, etc.  A month ago, she asked me to bring in something.

So this morning I took the better of the those two loaves in, just to get an honest, critical opinion.  I brought it wrapped in paper towels.  When she unwrapped it, there were ooh's and ahh's.  She showed it to her two workers, and they also nodded in approval.   So we sat down at the table and broke bread.  She paused for a moment while I took the first bite, which I don't blame her, heck for all she knows I could be some psycho bringing her poison or something.   But she asked me to bring something in, so that's why I did.  After she sampled it, she immediately began asking me about my production capabilities -- "Well can you at least make 4-5 loaves per day?".   I had to decline...   She told me she isn't a fan of the super-sour breads, which was perfect because these were not super-sour, and she even said, "I would buy this bread every day for my family for our dinner bread."  Nice!   At least it means I'm on the right track.  I still have a lot of experience to gain, but places like this web site has helped me tremendously, and I thank Floyd and all the people here.

We are all proud of you, gvz! Keep Baking and you'll be baking professional grade artisan bread in no time. just try to incorporate more wholegrain flours, as they bring a new dimension of flavor.

I am all for capitalism and making profits, but at this point, I have no interest in money from bread.   In fact, I think great bread should be Free.

Maybe a shop that takes all the unused leftover flours from all the other places in town, all the lemons...  stuff they will throw away...  and turn it around and make lemonade from it?