I just finished up a really interesting consulting engagement, helping the owner of a new bagel café in Brooklyn perfect their Montreal-style wood-fired bagels. All in all, it was a great experience that I thought I'd share with the TFL community.

First some background: The café, which is located at a great retail intersection in downtown Brooklyn, is in the process of construction and won't open for another month or so. Its centerpiece is a floor-to-ceiling wood-fired oven that the owners had built by folks who specialize in commercial WBOs. The working hearth is 5 feet wide by 6 feet deep, and the fire-bed is about 1½ feet wide and runs along the left side for the full depth of the hearth. 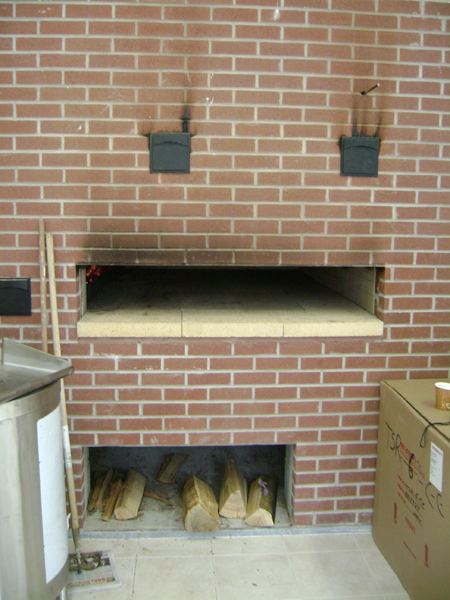 They knew nothing about either bagels or WBOs when I came to work on Tuesday morning. They'd had a partner who apparently knew something about baking, but for some reason left before the café was up and running, so it was my job to bring them up to speed.

To say that first day was challenging is an understatement. Because the café was still under construction, we only had electricity from one outlet. There was no hot water, no gas, no stove, no refrigeration. The ingredients they'd bought were completely wrong - AP flour when they should have had high-gluten, no yeast, no malt, no sugar and five gallons of vegetable oil (a good thing).

Worst of all, that beautiful beast of a used 140-quart Hobart floor mixer they'd bought had the wrong beater: because bagel dough is so stiff, that flat beater would have burned the motor out in no time. During the three days I was there, the owner did manage to order a dough hook and call a mechanic to give it a thorough check-up. Fortunately, they had a brand-new 20-quart mixer that turned out to be a great workhorse for the next few days of practice.

The crew was equally challenged. Their kitchen manager was mainly a cook, with some baking experience and no bagel experience, and their assistant was a 19-year-old kid who'd had some restaurant experience but no baking or cooking background. Fortunately, he turned out to be extraordinarly smart, hard-working and a fast learner, so that by the end of my three days there, he really understood the oven and could make some pretty passable bagels. 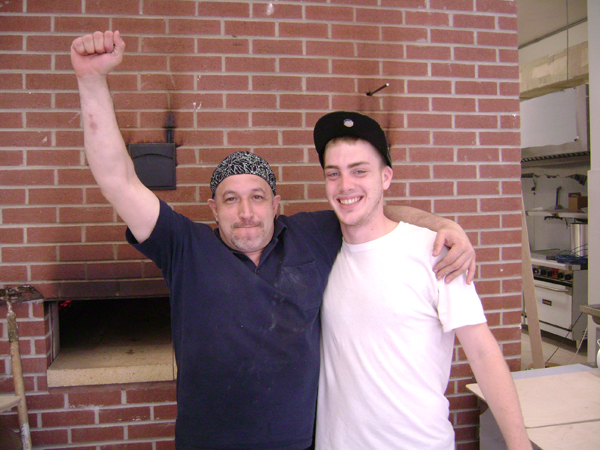 Now, the challenge of Montreal bagels is that they have very little bulk ferment time and virtually no proofing time, so the idea is to develop the gluten and strike a balance between the amount of yeast, sugar and malt in the dough so that there would be enough fermentation to develop a crumb, but not so much yeast that you could taste it.

As I said, the ingredients were all wrong, so our first order of business was to go out on a shopping trip to a local wholesale grocery outlet. The good news was that the store carried All Trumps; the bad news was that all the flour they sold was bleached and bromated: not a bag of unbleached to be had anywhere. Okay, suck it up and remember that this was only for practice. Once they're up and running, unbleached All Trumps is what it's going to be. The yeast was a nightmare: no fresh, no instant, only 2-pound bags of Red Star Active Dry. I hate active dry yeast, but again, our choices were limited. Malt, either dry or liquid? Forget it. At least they carried honey and sugar. And oh, yes, a hot plate so that we could set up a 5-gallon stock pot as a boiler (that lovely 35-gallon 200,000 BTU commercial boiler wasn't set up either).

Back to the café to get things started. The oven had been lit the night before and was chugging along at about 570 in the rear corner closest to the heat, tapering off to 450 at the far end of the hearth. The hearth itself was lovely: tightly jointed blocks of cordierite 2" thick by 18" square. Whoever built that oven knew what he was doing. 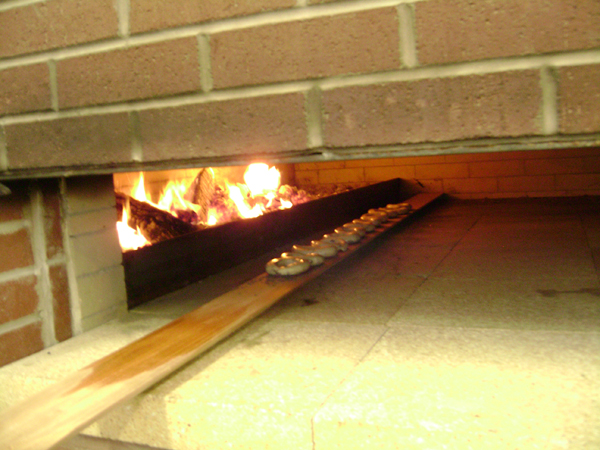 Our first mix was a challenge, but it was small, since (a) the 20-quart really can't handle more than about 10 lbs of flour at a time and (b) we were mixing just enough so I could show them how to hand-roll bagels. Needless to say, those first efforts were pretty dismal: uneven sizes, poor seals, dense crumb because of the deadly combination of that @#@^#%$ active dry yeast and cold water. Oh, and did I mention the peels were all wrong? Fortunately, the owner immediately ordered a new set of ¼" maple peels that we had the next day. 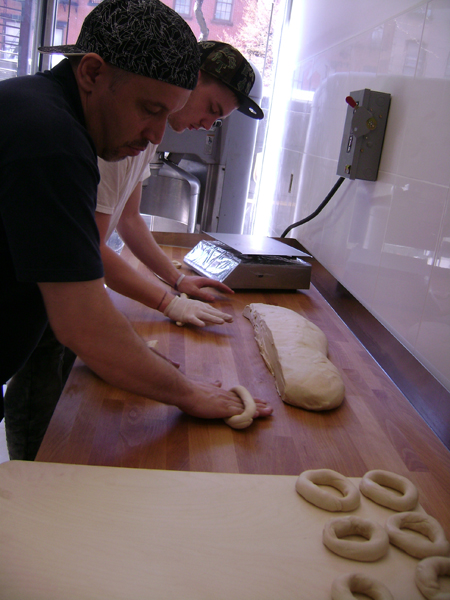 So that Tuesday was really a day of learning the oven and building some basic skills. We had an electronic thermometer that could give remote readings from a distance, and during that afternoon, Derrick, the assistant, really developed a feel for the oven - when and where to add wood, where the hot spots were and how to manage the heat in general. Iggy, the kitchen manager, showed some real promise and hand rolling and was as frustrated with the yeast as I was. Luckily, he knew a baker not far from where he lived who sold us a pound of fresh yeast the next morning.

Wednesday morning was a bit easier. Still no electricity besides that one outlet, no cooking surface except the hot plate, but the refrigerator was working and we had determined the right mixing time for the dough. Plus, we had that lovely fresh yeast to work with.

We spent the morning baking. First, I had them divide the dough into 3½ oz pieces and hand-roll those so they'd get a feel for the right size of the bagel. Derrick brought the oven up beautifully, and Iggy manned our makeshift boiler. Our first mix was a bit over fermented because I hadn't corrected for the fresh yeast, but that first batch of bagels was just gorgeous. 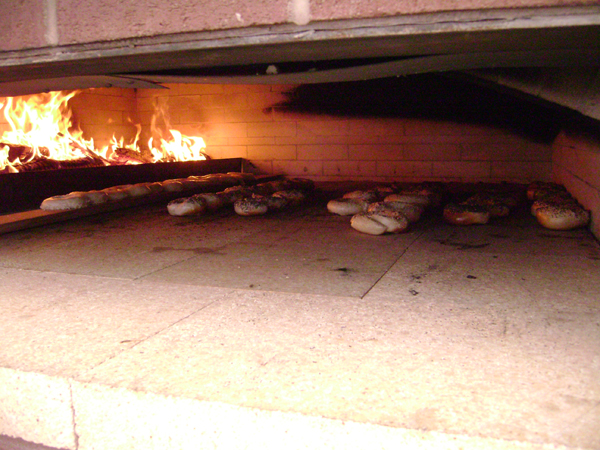 That morning, we had our first reality-check. The owner's wife had picked up several bagels from a place nearby that brought Montreal bagels in from St Viateur, one of the two major Montreal bagelries, and we sampled ours against theirs. The consensus was that we were pretty close in size, shape, taste, texture and color, but we wanted to do better. 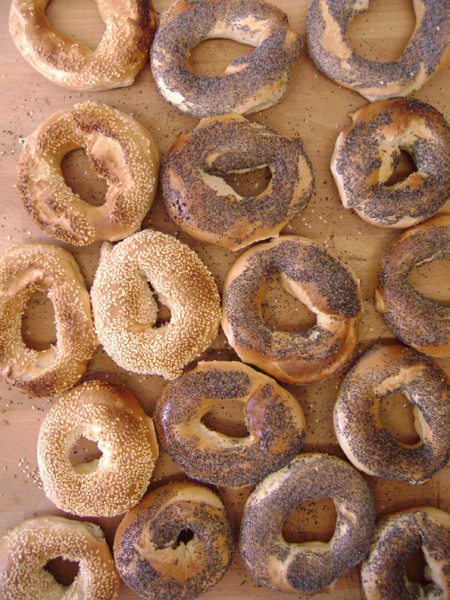 Thursday was our day to shine. We increased our mix size from 5 lb of flour to 10 lb, and added malt, which the owner had picked up the day before. The guys rolled by eye and by feel, and came up with a pretty consistent-sized product. Derrick did magic with the oven. Everything was chugging along on all cylinders. Even the undersized boiler, although it was a bottleneck, really didn't bother us too much. 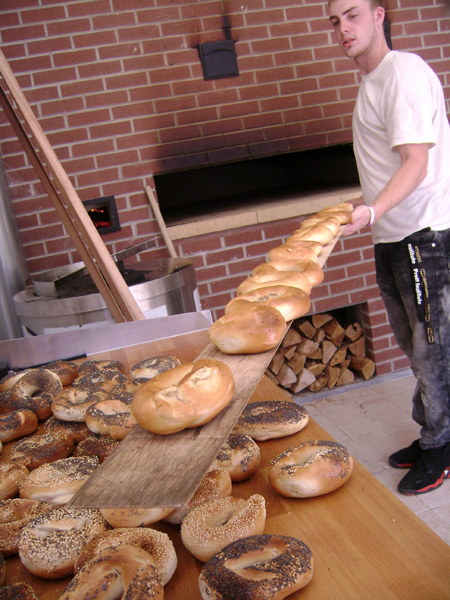 By the end of the day, we'd produced about 20 dozen really beautiful bagels. When I left that day, I felt as though all of us had become part of one family, and the guys, over the space of three short days, built a foundation of competence that will stand them in good stead once the café opens and business begins to build.

I have to say, it was one of the best experiences of my baking life.

Wonderful post!  Can you find out who built the oven?

What a kick that must have been for you to really tap into your experience and get these guys going on the right path. That oven is a beauty all-right, I'd love to be able to bake in something that had that much real estate for all the bread you could bake at one time. These fellows must be counting on selling a huge amount of bagels daily..and I hope they do! Thanks for this post Stan, it's a good read and the photos are icing on the cake.

Based on a 12-14 minute total bake time and 3:30 load cycle, we estimate that the oven will produce between 50 and 60 dozen bagels an hour.  Whether they can sell all that is going to depend on both foot traffic and their wholesale business.

Personally, I think that they'll need a second oven in the not-too-distant future.

Great post, Stan.  That must be very rewarding work.  Are they going to be okay when the proper flour arrives?  Won't the hydration and the feel of the dough be slightly different?

it's a living thing, sensitive to temp, humidity, the characteristics of the ingredients. in high summer, when the air temp in the bakery might reach 110 and the humidity 98%, the yeast and water will have to be dialed down in order to control the fermentation while the bagels are being rolled and shaped.  In winter, just the opposite.  Formulas will take you so far, but at the end of the day, it's about feel and experience, just as I'm sure you've come to recognize with your own eyes, and independent of the clock, when a dough is ready to come out of the mixer.

There's a lot of science to baking, but at the end of the day, I believe that good baking will always be an art ... which is what brings us all to TFL, right?

Hello,
Those are beautiful bagels, and what an oven!
It sounds like you all accomplished a lot during those three days.
Thanks for sharing the story and photos.
from breadsong

A very nice experience, thank you for sharing too.

Great post Stan. Nice to see what desire and hard work can do from scratch.

I loved reading this story! Ingredients are key - and I'm wondering, if you don't like active dry yeast, what type do you prefer?