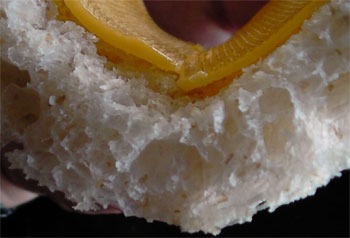 Glenn, inadvertently, threw down the gauntlet this week when he asked a question in his post: How to get a light and tender crumb in sourdough.  I took up the challenge (even though I know Glenn didn't mean it that way) and in the process got diverted from what I had originally itended to bake this weekend.

Initially, I considered adding milk and some form of shortening, but on re-reading Glenn's thread I realised he didn't want the dough to be enriched in any way.  So flour salt and water it is.

I am pretty happy with the result and I think the following all contributed to its success: 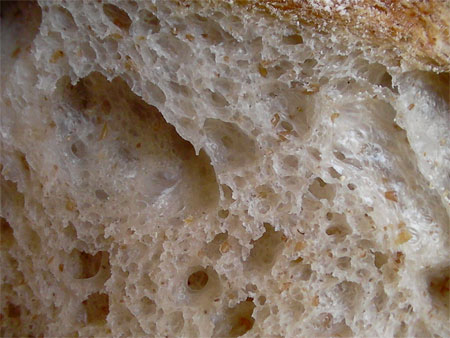 Mix until smooth and leave to ferment for about 8 hours or until just about to peak.

Whisk the above until well incorporated.  Now add:

Now you have to knead until you get a really good windowpane.  I don't have a stand mixer, so that meant hand mixing for a long time.  I didn't time it exactly, but if I had to guess, I would say that I spent anywhere from 30 to 40 minutes kneading.  If I had a stand mixer I would have developed the dough even more, but I don't and I was getting tired, so I stopped. Unfortunately, there was no one on hand to help me take a pic of that windowpane. Pity, because I can't see myself doing that again in a hurry.  Of all the changes I made to my regular recipe, I think the additional kneading made the least difference.  Perhaps after all that time it still wasn't developed enough.  Maybe I would have noticed a bigger difference if I had used a mixer.

Pre-shape.  Rest 20 mins.  Shape.  Retard overnight.  Usually, I three quarter prove before I retard, but it was getting late, so this one went straight into the fridge. 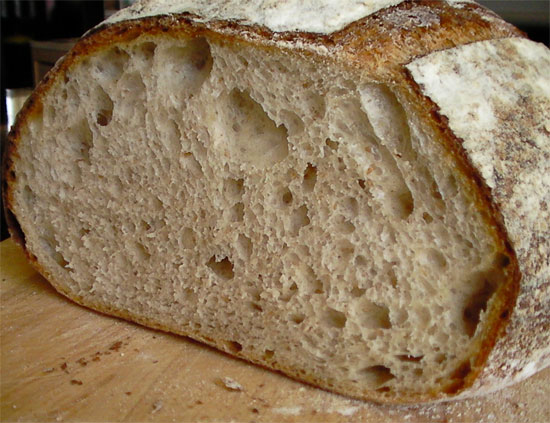 The crust was a bit thinner than usual due to the reduced baking time and lower temperatures.  The crumb is beautifully tender and moist. 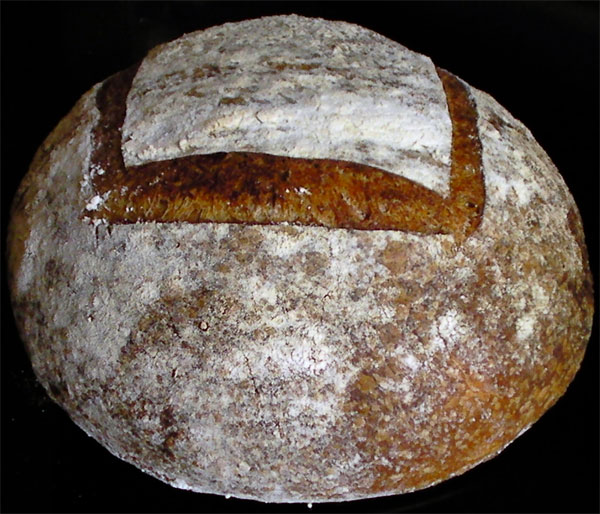 This is a nice tasting bread with a mild, but surprisingly evident, wheaty flavour despite there only being 50g of WW in the recipe.

You Know your stuff, Syd.. Well done! I'll heed your notes next time..

Thanks, Khalid.   Likewise.  I have been following your blog for a while, too. :)

for an interesting and useful procedure, Syd. Nice bake.

Hello Syd, Beautiful bread and a new technique! Well done!
Your bread looks strikingly similar, in appearance and texture, to one I had the good fortune to taste a couple of weeks ago. Wanting to replicate that bread here at home, I am looking forward to trying your technique.
Thanks Syd! from breadsong

Actually, not a new technique really;  just an almalgamation of some old techniques.  The water roux method is very popular here in Asia.  From the research that I have done, it seems its main benefit is to extend the shelf life of yeasted breads, therefore doing away with the need for artificial preservatives.  I have made ordinary yeasted bread that has lasted for more than a week with this method. It seems it can also  contribute (albeit slightly) to a higher rise because of an increase in fermentable sugars made available by the scalding process.  It is not a technique I would ordinarily use with sourdough because sourdough has such excellent keeping qualities in its own right.  However, Occabeka suggested on Glenn's original thread that it was an effective way of increasing hydration and it seems that is is.  This was a 75% hydration dough but it felt more like a 70% hydration dough.  Perhaps somehow the extra water gets locked up in the gelatinised starch.  I am guessing wildly here and have no scientific basis for that comment at all, but it sounds like a good theory!

Hello Syd, I appreciate the extra explanation! from breadsong

I managed to get the softest airiest crumb I'd ever achieved yesterday, using the 80% hydration Tartine Basic Country Bread formula, which involves no kneading but long ferment and proof times.

That looks gorgeous, Glenn.  Yes, I would say that increased hydration, coupled with not drying the loaf out too much are probably the two most important factors.  But I also think flour choice is very important, too.  I think, if you have a very strong flour, no matter how high the hydration, you are still going to get a chewy loaf.  I suppose it all depends on what texture you are going after at the time.  I look forward to reading your blog results. :)

Syd, I do agree that strong flour will result in a denser crumb.  I used Central Milling Company's Organic Artisan Baker's Craft (malted) flour, which I believe is about 11.5% protein. Using that flour I've made very tender, moist-crumbed baguettes, but until now I hadn't gotten the airy tender crumb in a full-size loaf.

My blog is posted now (http://www.thefreshloaf.com/node/22787/producing-tender-crumb-–-tartine-basic-country-bread).  I followed the Tartine formula, which involves no kneading, just a long fermentation with periodic stretch and folds and a long proofing.

Triangulating from your experience and mine, it seems that low-protein flour, high hydration and full dough development (whether from intensive kneading or long fermentation with stretch and folds) are important factors to achieving a tender crumb.

Your crumb looks fantastic!  But 30 minutes of kneading would wipe me out.  Looks like we got to a similar destination by different routes.

Thanks for taking up the inadvertent challenge.  Good work!

You've done homework on this one and it is a lovely crust and crumb.  You have a great post going here and I hope you don't mind I add my favorite crust and tender crumb?

I can't tell what the yellow is on your top photo?

I have our still favorite from Northwest Sourdough for a crusty crust and tender crumb, this is the way Mike likes it best.  I use KAAP for a more tender loaf and for chewier KABF also can add whole wheat or rye and adjust hydration, this one was 69% hydration and, can be adjusted easily for texture on crust, adding olives, etc.  It gets crustier in the iron covered pot...  We enjoy it made into rolls too. 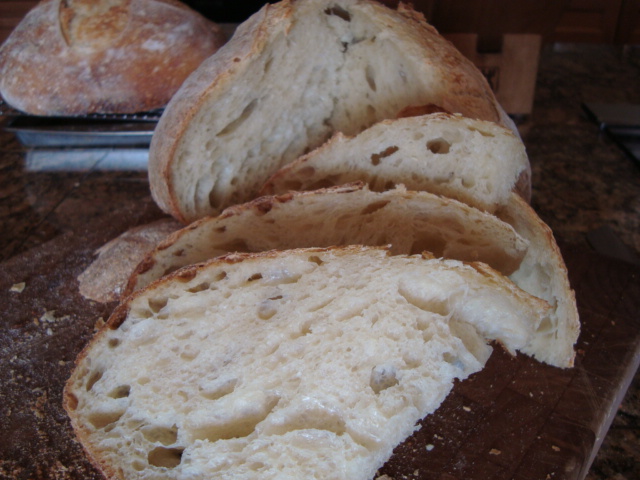 That crumb looks spectacular, Sylvia!  And I think you have the perfect ratio of crust to crumb for that kind of loaf.  The crust looks thin and crackly, the crumb tender and moist. Lovely bake!

I can't tell what the yellow is on your top photo?

It is cheddar cheese!  No butter because the bread was too fresh and soft to spread butter out of fridge on (can't keep butter at room temp here).

I printed his formula which is a beatiful loaf, but Sylvia which is the recipe at Northwest Sourdough which you base your loaf on. It's also quite alluring.
I have found the Tartine BC to be tender as well but I'm always looking.

Thanks if you can let me know.

Very interesting, Syd - I know hot soakers for whole grains, but never heard of this method before.

Thanks, Karin.  I guess it is like a hot soaker in a way.  Just with flour instead of grains.  It sweetens the flour quite noticeably.

The water roux method is something I have seen around but haven't tried yet, but I am intrigued b/c the crumb you got there is amazing, looks really delicious.  I am using 13% protein bread flour so maybe I"ll have to try some lower.  I am still puzzled at the need for the extra kneading, since you are doing the S&F's already...but it must have contributed significantly to the softer crumb.  Did you do the traditional kind of knead or the longer strokes on the board?  Thanks for sharing, and thanks for the recipe, too.

Thanks, Oceanicthai. :)  I used this method for the fist time when I learned how to make this loaf a few years ago.  At the time, I did some research on the method and conducted a few expeirments of my own.  It's main purpose is to act as a natural anti-staling agent.  It is best paired with ordinary yeasted breads because sourdough has excellent keeping properties in its own right.  I am not sure how much it contributed to the crumb of this loaf.  I am still experimenting with it.  It was more of a 'blast the target approach' where I tried to use all the good techniques I knew (without trying to enrich the dough in any way) in one loaf.

but I just tried this, I guess because Chuck's post on roux vs mash reminded me of this which has been in the back of my mind.   The bread didn't turn out well - I'm having WFO undiagnosed heat loss difficulties - but I really like the crumb although I don't think it's as "thready" as the one you showed.   I used a stand mixer for 25 minutes until the power went out (I thought it was me but no, it was the whole neighborhood.)  And instead of retarding overnight I did a counter final proof for a couple hours.   As I was preparing the roux and starter last night, I realized that you called for a whole grain starter, and I did it, but I was a little perplexed about why.   So why?   Anyhow, very clear write-up and easy to follow and a cool new (for me) technique that I will come back to.  -Varda 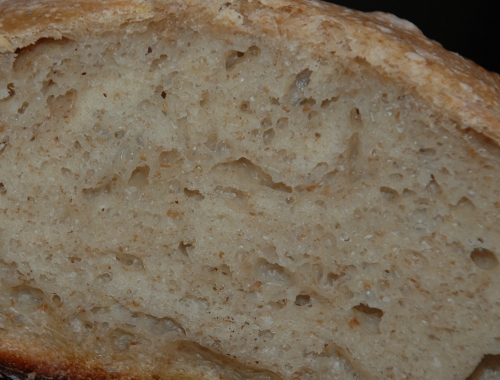 Hi, Varda.  If I include whole wheat in a loaf, I often add it to the starter during feeding.  The main reason for doing it this way is to give the coarser bits of bran the maximum time to soften up/ break down a little so they don't puncture the gluten.  Adding whole grains to the starter also has the added benefit of giving it a bit of a boost due to increased amylase activity. It also improves the flavour of the bread.  It has a surprisingly wheaty flavour despite the small amount of whole wheat.  And if you don't include the whole wheat in the starter feeding, the wheaty flavour won't be as pronounced.  David's SFBI miche formula produces a similar result.

Did you do any folds during bulk ferment? I still give at least one fold (halfway through bulk ferment) despite the intensive kneading.  This was the longest I have ever hand kneaded a dough and it was quite a marathon event.  Haven't done it again because I find I get similar results through folding and time.

Hope you sort out your WFO leak, soon.  My friend Joe always used to tell me that there was nothing a piece of Duct Tape couldn't fix!  Maybe it will be the answer to your problems, too!

Hi Syd,   Thanks for the explanation.   I was a little mystified why you would add the whole grains to the starter instead of to the final dough when it's such a small quantity, but what you're saying makes a lot of sense.   I have been avoiding whole grain starters for the most part because they can go past ripeness pretty suddenly especially leaving them out for 10 hours overnight.  I don't think I had that problem in this case.   I did do in the bowl stretch and folds (2 I think) but I kind of muffed the shaping because first I cut in two and preshaped and then changed my mind and mushed the two together which gave me some mottling (from the raw flour) in the final product.   But I really liked the texture of the crumb despite the other problems I had here.   I was thinking that now that I've gone this far I might as well go all the way and make Japanese white bread using water roux.   I see that Yippee has a very detailed post on the subject.   As far as duct tape goes, I am very fond of the stuff but somehow I don't think my heat leak problems will be solved quite that way.  -Varda