PMcCool posted a Sweet Vanilla Challah, about this time, a couple of years ago (his post is here).
I thought his bread was just lovely - and wanted to make a Challah like his for Valentine's Day
(trying for heart shapes!): 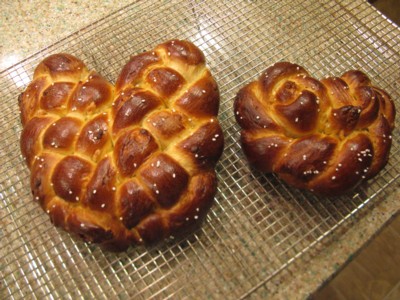 These breads are made with Mr. Hamelman's Challah, substituting some of the water with pure vanilla extract and vanilla paste, and adding 15% finely chopped white chocolate after the dough was developed.

arlo suggested adding white chocolate to 'Pain au Levain a la Vanille', another beautiful bread I was quite taken with (thanks, inlovewbread and arlo!), and I thought white chocolate would be a good addition to this Vanilla Challah.

The breads were glazed with 1 egg yolk, ½ tsp sugar and 1 tsp pure vanilla extract before baking, as instructed in PMcCool's post.
I sprinkled a bit of pearl sugar over before baking.

Have you ever been to an ice cream shop when they've been making their own waffle cones?
Don't those waffle cones smell amazing as they are cooking?
That's exactly what the kitchen smelled like as these breads were baking!

To shape these, I divided 1250g of dough into 6 pieces, approximately 208g each. 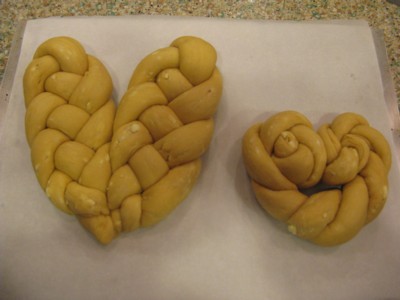 For the larger heart,
Four strands were rolled out to 24" long each.
Mr. Hamelman's Two-strand braid, method two, looked like it could form half of a heart.
I tried braiding two separate  two-strand 'braids' and set them close together to form a 'heart'.
I used this video to help me with the braiding: http://www.youtube.com/watch?v=3YyDkdwVje0

For the smaller heart,
Two strands were rolled out longer, 30'"-32" or so each (forgot to measure!).
I used Mr. Hamelman's Two-strand braid, method one, twisting the two strands of dough, then coiling each end in towards center.

I have no crumb shot yet...I'm going to give one of these breads to family...likely the big one!

Happy Valentine's Day and Happy Baking everyone!
From breadsong

Mmmmmm, Breadsong they look lovely. I can almost smell them from over here on the Island. Can you tell us more about the vanilla paste? I'm guessing you don't mean a pastry cream so I'm curious to know more about what it is exactly.

Have a wonderful Valentines Day!

Breadsong, you are so creative!  I am sure that whoever receives them will be very impressed.  What is vanilla paste?  I have never heard of pearl sugar, either.  Lovely bake.

Hello Franko and Syd, Thanks so much! The breads smell so good with all the vanilla and we're looking forward to tasting!
This is vanilla paste (actually, vanilla bean paste); I use it place of vanilla bean seeds sometimes. 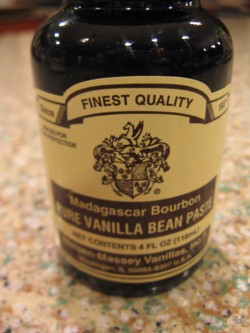 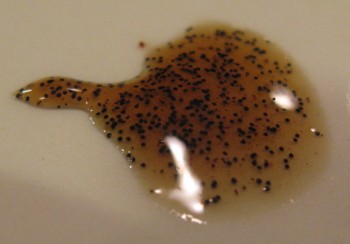 Happy Valentine's to you both, from breadsong

Beautiful braided hearts, Breadsong.  You can smell the love (smells a lot like vanilla).

Oh yes, the smell of vanilla was incredible...I agree with you, vanilla=love, for my tastebuds anyway!
from breadsong

Delicious! Now make some french toast with that challah, topping it with creme anglaise and black berries to go on top and I think it's safe to say I could return to my bed for the day feeling fulfilled after eating it : )

Hello arlo,
That might be just the thing for breakfast tomorrow!
I have strawberries, no blackberries, but still...
This is the first challah I have ever tasted and I'm hooked...
(here's a crumb shot...and I added a French Toast shot (what a wonderful Valentine's breakfast! thanks for the idea!). 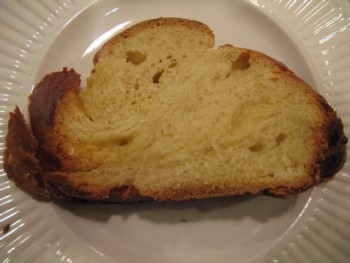 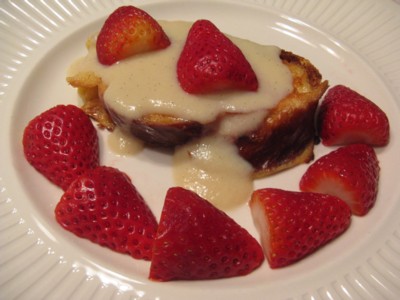 Thanks so much, arlo!
from breadsong

Lovely, breadsong. Those close to you are lucky to have you for a valentine. The care you take shows in your work.

That is so sweet of you to say! I am lucky to have them, too.

Looks delicious as it is a pretty Valentine!  I love challah.  I think mostly because it can be so versatile!

Hi Sylvia, thank you so much! So nice to hear from you!
This is the first time I've ever baked or tasted Challah.
I love this bread - arlo's French Toast is first on the list for things to make with it, and I look forward to baking this bread again and finding different ways to enjoy it.
Thanks again & Happy Valentine's, from breadsong

coincidentally i also made Hamelman's challah yesterday. Tho nothing near as creative and sweet as yours :) My first time trying his recipe too. As far as i know, his is the only one to call for high-gluten flour. Wasn't it a joy to work with such a strong dough - made braiding a breeze. And even minus vanilla & white chocolate, it tastes and smells wonderful.

Can you taste the vanilla in the bread?

Hello ww,
Thanks so much! It is a really good formula for braiding, isn't it?
I chilled this dough for bulk ferment and I found the cold dough really easy to work with when shaping.
I was using 13% bread flour and it made a nice strong dough.
There is vanilla flavor in the bread, and sweetness and flavor intensify when you take a bite that includes a little nugget of the white chocolate!
from breadsong

Those hearts are just adorable. When you mentioned trying the addition of white chocolate it reminded me of the Club Med White Chocolate Bread. I bet challah with white chocolate and vanilla bean paste would be yummy too.

Hello, I'm glad you liked the 'hearts'! Thanks for the link to the White Chocolate Bread - it sounds like it would be good. From breadsong

Beautiful work, breadsong!  They look every bit as good as they smell!

Paul,
Thanks so much for posting about your Sweet Vanilla Challah - your breads were so pretty - and I'm so glad I tried making these.
The aroma while the breads were baking is something I'll never forget!
Everyone was tremendously pleased with the flavor too.
Thanks, from breadsong

Same here.... I too haven't baked a challah, yet, but yours is tempting me to do one... Beautiful Breads, Breadsong..!

Hello and thank you!
I hope you will like this type of bread as much as we did.
I really found this a nice dough to work with.
From breadsong