To tell you the truth, I've been a bit low on the breadbaking front recently. My love of food and cooking have never been greater, however, and I don't think I've ever spent more time in the kitchen than I have during the last couple of months. The downtime in breadbaking means that I get the chance to broaden my other culinary horizons, and I thought I should put together some photos of what I've been up to this weekend.

After the heart-attack-but-in-a-good-way of last week's duck confit, I wanted to focus on "lighter" things this week. "Lighter" being savoury puff pastry stuff, huh? Eh, it's all relative though...

First thing I wanted to share is a nice potato blini, photo of mise en place below. Cook, peel and rice about 300 gr. potatoes. To that, add 2 Tbsp bread flour, 2 egg yolks and enough milk to make a thick cream. Add salt+pepper+herbs+spices as you wish. Freshly grated nutmeg works great. Whip 2 egg whites to max volume on medium-high speed, and gently fold into the potato cream. Spoon small cakes into a hot pan and cook both sides in butter. 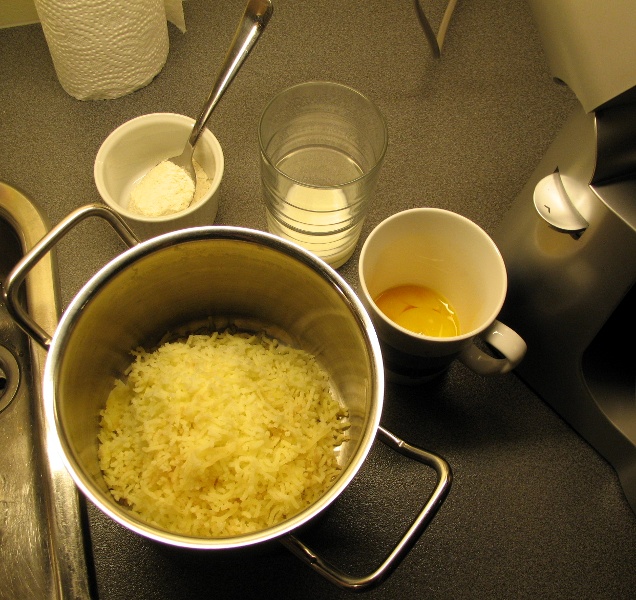 The potato blinis are very versatile and a great weeknight snack or appetizer; I had them with some sardines, sour cream and caviar. 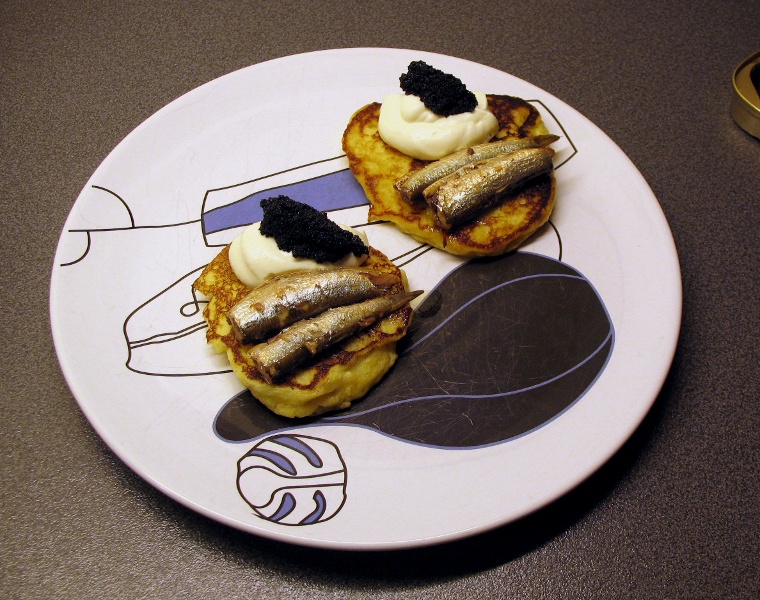 Also this week, I wanted to put together some savoury dishes using puff pastry. Just as with confited food, I don't find puff to be at all greasy or "heavy". On the contrary, light, delicious tarts or flans can be quickly put together if there's some puff in your fridge. Puff is one of those things that might appear hard to make, but comes together quite effortlessly if you've done it once or twice before. And it's easier to make than croissants. I've made quite a few batches of puff, and I thought I could put up some of my own thoughts and recommendations regarding the process in this post. For the dough:

If you've never made puff before, I recommend starting out with a small batch, with say 500 gr. dough and 250 gr. butter block. A small batch like this is easy and quick to roll out during lamination, and this is a practical size to start out with in order to gain some experience and "understand the pastry". Below is a photo of my pastry with these measurements during the 5th fold. 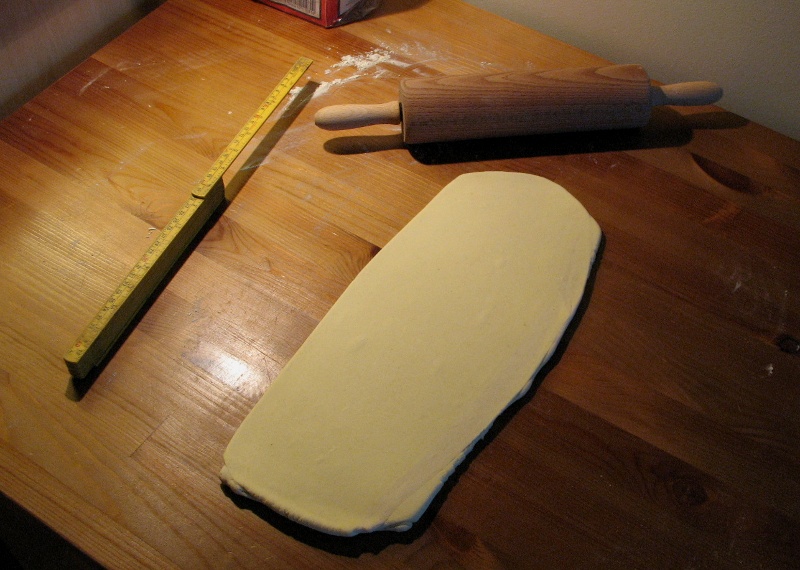 My first application was some simple tomato flans, and, to tell you the truth, they don't come much simpler than this. Simply cut out rectangles, egg wash, dock with a fork and put tomato slices on top. Finish with salt, pepper, olive oil and herbs/spices of your choice. 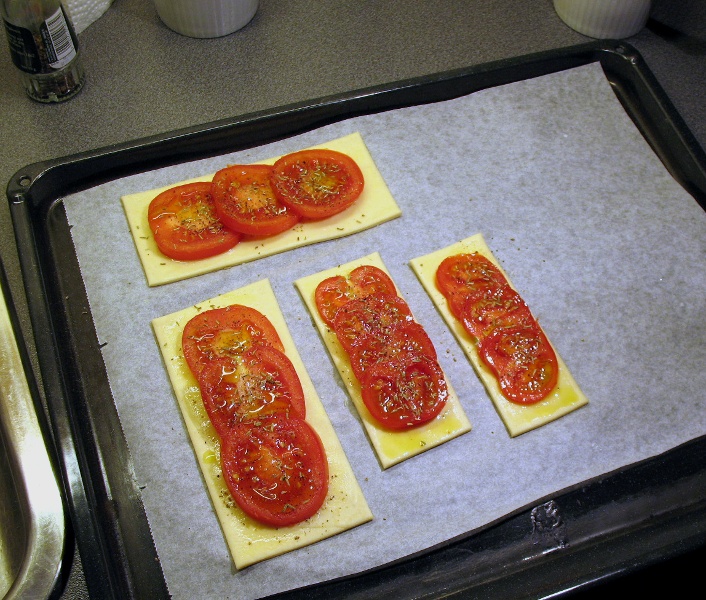 Bake in a hot oven, approx. 200dC for 20 mins or until done, and serve with a green salad and a delicious slice of salt cod (Morue et flan de tomates?): 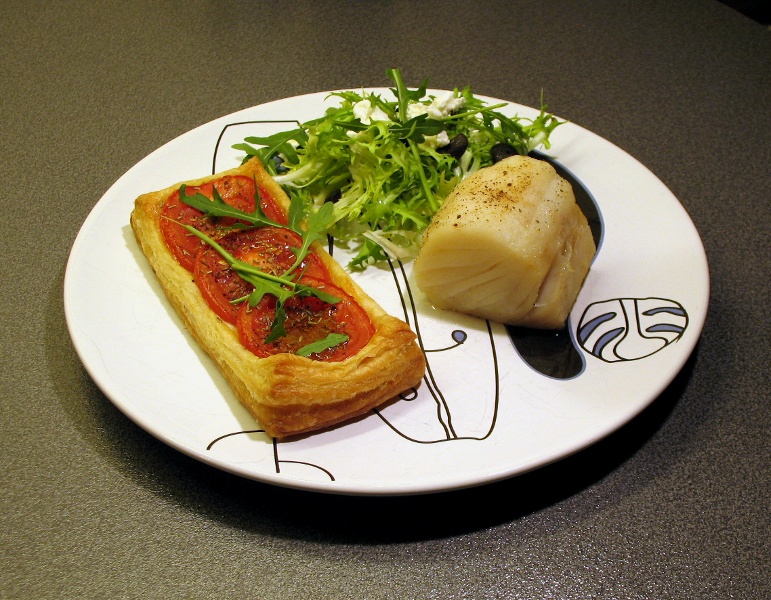 Puff pastry diamonds are also very versatile and simple to make - below I've filled one with some green leaves and served with salmon carpaccio: 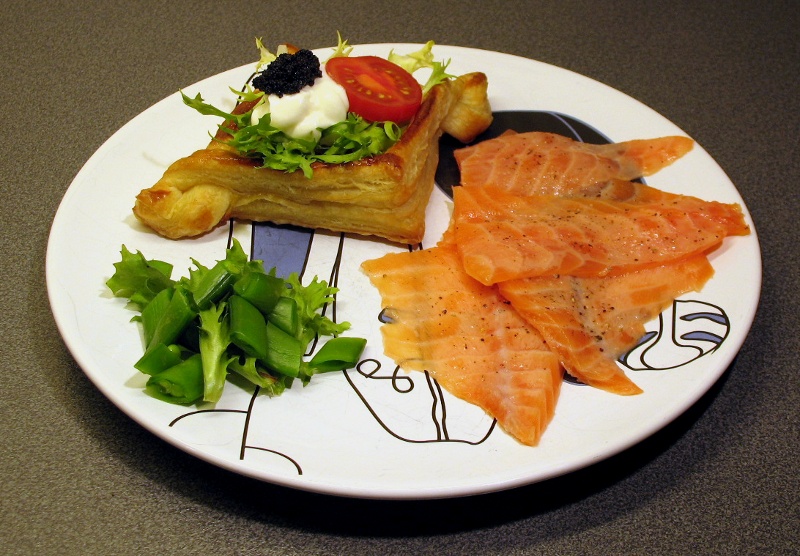 Next on my list of things to try out, was an oxtail and duck liver terrine. I love any old-fashioned oxtail soup, and I'm also a fan of liver as an "exotic" ingredient bringing unexpected flavour and texture to the table. I've previously used it to good effect in salads, with pasta or as the main ingredient, and I find most livers go well with sweet flavours of honey, orange liqueurs and juices, figs and dates. I wanted to serve this terrine with a nice piece of pastry, but get those oxtails tender first! Bring to a boil and keep boiling over low heat for 3 hours or until the meat is easy to pick off the bone. 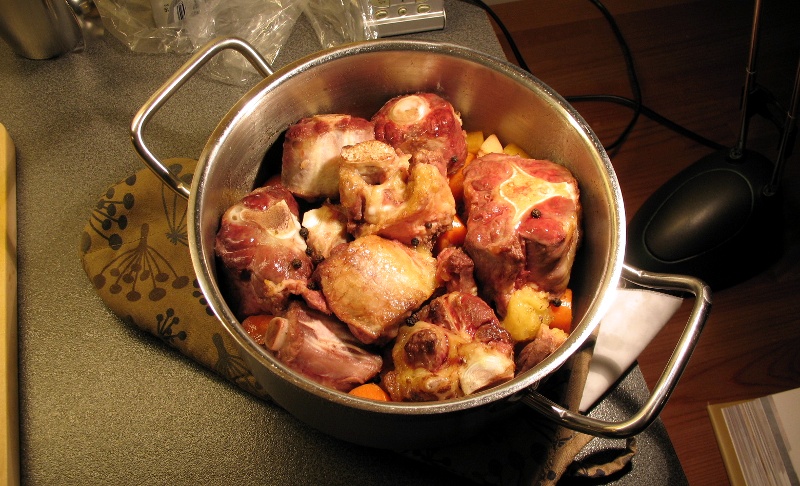 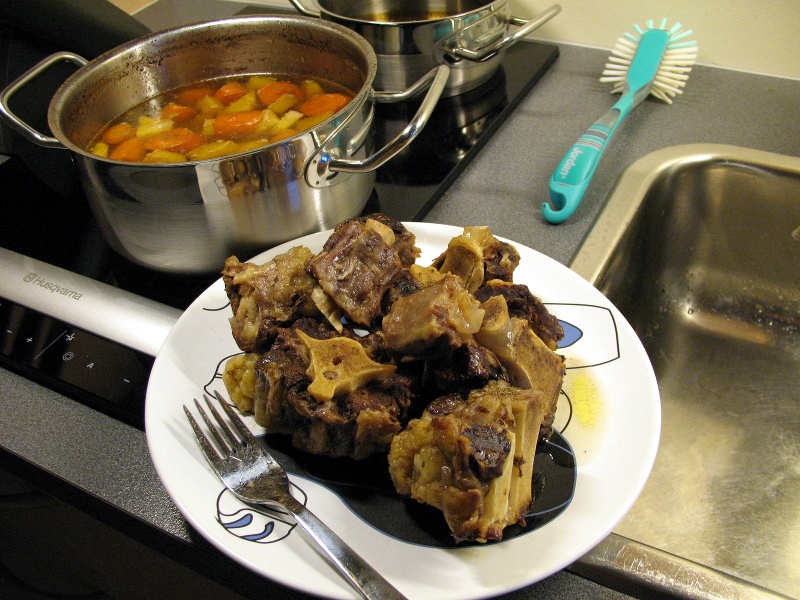 From here on in, it's simply a matter of rolling slow-baked duck liver slices around oxtail meat to make a tight log, and chill for at least 2 hours. To serve with the terrine, I baked a sheet of puff pastry with weights on top to make a thin, crispy layer. I then sliced it into slim rectangles crosswise, and slathered each with a carrot-chevre cream (soft chevre puréed with boiled carrots, olive oil and lemon zest) and topped it with small carrots that were poached in orange juice infused with toasted caraway seeds. Absolutely scrumptious: 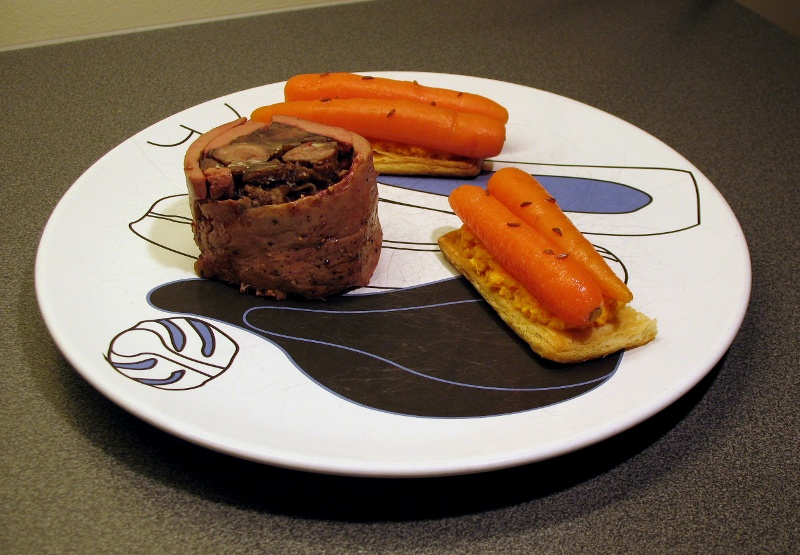 Wow, I can only hope when my Culinary Artistry class starts this semester I get a chance to make some beautiful dishes like yours Hans!

Your culinary skills sometimes makes me wonder if you're actually a chef at a five-star restaurant, Hans.  Those are all extraordinary dishes and presentations.

The tomato flans are simple, but oh, so elegant.  Definitely on my "do" list, but not until this summer, when I can harvest my own tomatoes.

Thanks for the inspiration!

Beautiful food, hansjoakim. Very nice demonstration of technique as well. The oxtail and duck liver is a must.

Hans - Yes, you are ready for prime time!

It's all mouth-watering....and it can't be as simple as you make it seem.

Looks delicious Hans!  And so beautifully presented, too.  My mom used to make the best oxtail stew ever.  She would cook it until the meat started to fall of the bones.  As kids, we loved it so much, we used to suck the bones to release all the juices/marrow.  It had such a rich flavour and such a luxurious texture to it.  You've taken it to another level with your terrinne.  It looks like something from a five star restaurant.  But what did you do with those bones? :(

Thanks for your kind words and encouraging replies :)

Hello, Everything you've made here looks first-class and so carefully prepared.
Thanks for the pointers on puff pastry; your tomato flans are beautiful and elegant - looking at your photos makes me wish it was tomato season. I will file the idea of your lovely flans away, until then.
Thanks, from breadsong

Your puff pastry is so lovely.  Beautiful even layers.  The first time I made it, it looked like a children's relief map of Africa!

i have a newbie question about your formulae. for example, the one for raisin nut sourdough.

why do you have three columns for weight, like in the cold soaker it says rolled oats, baker's percentage, then 38, 45, 54.  i am confused about how much of each ingredient i should be adding. also, what is a cold soaker exactly? the instructions for using it are not included in the formula.

thank you very, your loaves are really inspiring, and i hope that with some clarifications, i will be able to approximate them somewhat.