Hello,  I wanted to try making Apple Bread again, after seeing Larry's recent Odds and Ends post (thank you Larry) (and because I was able to find Honeycrisp apples at the market!). 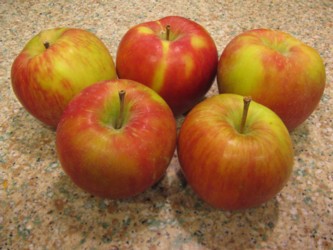 I made this bread combining elements of Mr. Hamelman's Normandy Apple Bread, and Mr. Kastel's Apple Bread. With many thanks to Mr. Hamelman and Mr. Kastel!
I wanted to try mixing the final dough without water, to try and get as much apple flavor as possible in the bread
(apple cider, applesauce, and sour cream stand in for the water).


I made two different batches. I learned from the first batch:
- I used way too much yeast (BP 1%). The dough fermented too quickly! I reduced to .4% BP in the second batch.
- I found the dough a bit stiff after mixing and didn't do a great job mixing in the dried apple (uneven distribution of apple shows up in the crumb shots below, from two different loaves). For the second batch, I tried double-hydration, to get some gluten and then soften the dough with the addition of a second amount of liquid. The dough was easier to spread out, I was able to "jelly-roll" the apple pieces and knead them in much more easily.
- Not moistening the dried apples before adding, I think caused them to pull water out of the dough during bulk fermentation; the dough seemed dry and I found it harder to shape. I splashed a bit of extra cider over the dried apples for the second batch and this helped.
- Transparent apple applesauce contributed great flavor to this bread. Had enough left over to make a second batch. :^)
- A sweeter sparkling apple juice didn't translate to a better tasting bread, to my taste; in the second batch, I used apple cider which was not as sweet and I liked the flavor of the bread better: 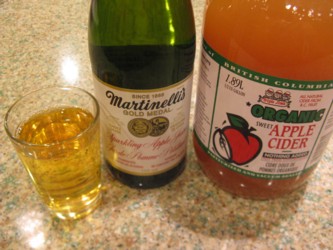 These were from the first batch (the "P" is for Pomme, a nod to Normandy!).
The kitchen smelled like extremely apple-y after the bake!!!: 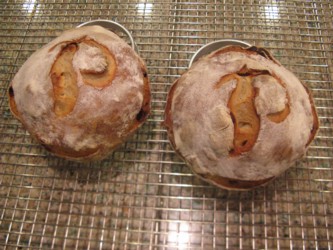 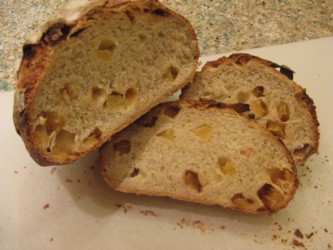 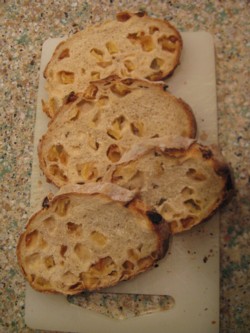 Here is a picture of a loaf from the second batch (trying for apple branches and leaves with the scoring): 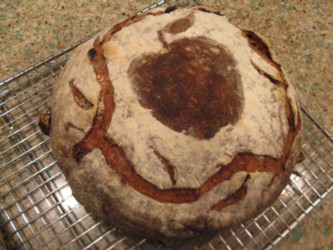 In drying the apples, I was curious what the yield would be.
For the second batch, 5 apples = 1200 g weight, then 860g after peeling, coring, dicing, then 165g after drying (the apple flavor concentrated quite well, and yummy caramelization happening here and there!): 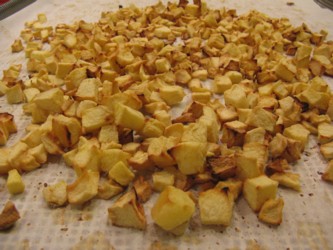 I really loved the flavor of the bread in both batches, but in the second batch the bread had a bit more tang that complemented the sweetness of the apples.  The crumb is nice and soft. In the end, I got the apple flavor I hoped for!

Happy baking everyone! from breadsong

Thanks, Glenn - another post here on TFL that inspired me is browndog's The Scent of Apples.  The flavor of the bread is really good - and the aroma in the kitchen after the loaves finished baking - amazing!  from breadsong

Hello arlo, I was trying to emulate your beautiful leaf-looking scoring on your batard you posted recently (the stencil was a borrowed idea from the Pear Buckwheat Bread in AB&P).  Thanks so much, from breadsong

Nice boules, breadsong and very creative slashing on all of them.  I imagine you have a lovely flavor with the combination of dried apples, applesauce and cider.  What was the impact of the sour cream?  I found that an interesting ingredient.

I've just baked a parmesian cheese bread using applesauce which will be sampled/consumed at my pub this afternoon.  I'm curious to see how much sweetness comes through.

Thank you so much Larry!
Your bread sounds absolutely delicious!
I really liked Sylvia's idea of apple and cheddar too.
I was really happy with apple flavor in this bread and it made for a fantastic ham sandwich, and toast; we feasted all week and never got tired of it!
The sour cream made for a nice, tender, soft crumb. I am interested in making the bread without the sour cream and adding more cider to see what difference that may make. Thanks again, from breadsong

Mmmmmm - Honeycrisp.  The most sought after apple at our farmer's markets (and expensive, since it's a difficult apple to grow).   Don't have the will power to use it for cooking or baking.  We love its super crispy sweet-tartness.  Better than chocolate!

BTW, if you ever come across Zestar, give it a try.  It's a great crunchy early cultivar.

Hello Lindy, Thanks very much for your comments and the apple variety recommendation!  Zestar is an apple I haven't heard of before. If I ever come across it, it may become a new favorite for me (Transparents for sauce, Honeycrisps for drying (and eating!), Golden Delicious for cooking, Zestar for ...?)   :^)
from breadsong

It is truely nice scoring!!!

I can't help but think that some enrichment in this bread [your sour cream] is a really good idea.

It looks a big loaf; any indication of scaling weight?

Very arty, and I'm sure it packs full flavour; I agree that strong cheese must be an ideal accompaniment

Hello Andy, This first try at adding sour cream into a levain formula returned a very tasty result, and a really nice texture in the finished crumb.
The apple-stencilled loaf weighed in the 1000g range before baking.
Thanks so much for writing! from breadsong

The use of sour cream with apples is a nice touch to bring out all the apple flavour as well as keep the crumb soft and moist.

Near Cobble Hill on the Island is a cidery called Merridale Estate Cidery ( about 10-15 minutes away from True Grain Bakery) http://www.merridalecider.com/ that has a great selection of various styles of cider as well as eau de vies, liqueurs and in the near future, calvados. If you get over to Island sometime stop by because some of the apple liqueur's they have are just pure essence of apple and would work beautifully with your bread next time you make it.

Hello Franko,
Thanks so much for recommending Merridale Estate Cidery - this will be on a travel itinerary for sure, next trip over. I was thinking an apple liqueur would have been nice to have on hand to use in this bread, too. BTW there's a distiller in Vernon, BC (Okanagan Spirits); they make an apple eau-de-vie they call "Canados".
I'm so glad you like the bread - it does make really good sandwiches and your panini idea sounds fantastic.
Thanks again from breadsong