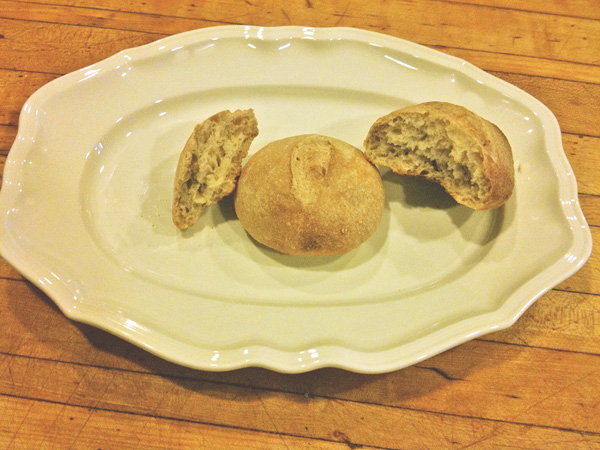 We vacationed in France this year and had the pleasure of dining at several upscale Michelin starred restaurants. I noticed a trend toward offering small crusty rolls rather than sliced bread(s). in some cases the rolls were warm as if fresh from the oven. There were always crusty fresh rolls with chewy crumb. There would also be two or three alternate choices, usually a dark bread, and a walnut or olive bread.

I thought I could replicate those rolls but wondered if I could find a way to store them and reheat them? Could I serve rolls like this straight out of the freezer with a workday dinner having no time to bake?

After experimenting, I have had some success. The results aren't quite as good as fresh baked just out of the oven. However, the results have been better than just satisfactory and better than I expected.

For the basic French hard roll I make a no-knead refrigerated dough with 75% hydration (32 oz General Mills Harvest King, 24 oz water by weight, 2 tablespoons coarse French grey sea salt, and just 1/4 teaspoon instant yeast for a slow rise. I mix the dough ingredients without kneading, and let the dough rise for several hours. It can then be refrigerated until ready to bake several days later. It's OK in the refrigerator for about two weeks.

To make the rolls, I measured out 2.5 ounce portions of the dough. This makes a nice size dinner roll that's also big enough for a small sandwich a little larger than a typical slider. I folded each portion 5 or 6 times with a letter fold and then formed a ball by pinching the dough underneath. I rolled each ball in my flour coated hands and placed six rolls onto a cookie sheet with a Silpat silicone mat. Proofing took several hours in my kitchen. The rolls were slashed and then baked for about twenty minutes at 450 F. I used a spray bottle with water to create some steam during the first few minutes of the bake. The rolls were placed on a wire rack to cool.

After several hours, the rolls we hadn't consumed that day went into a zip lock plastic bag and then into the freezer. It's important not to put them in the freezer too soon because warm rolls will give off moisture and form ice crystals in the bag.

When ready to thaw and serve the rolls, I put several of them in the microwave oven and microwave on high for about a minute until fully thawed. At this point they'll feel like fresh bread but the crust won't be crisp. Then I put them into a toaster oven and toast for about 3 minutes. This brings back the crispy crust. Then they're ready to serve as warm rolls. They have a crisp crust, chewy crumb with holes, and good flavor.

If I'm going to serve as small sandwiches, I would use a bread knife to slice the rolls after the micowave step and before the toaster step. Then toast each half roll.

It's a way to have a selection of small dinner rolls on a whim when you don't have time to bake.

try par baking. bake until it just begins to brown. then cool and freeze

use the highest heat in the oven that you can, like 500 or so [so that the rolls don't dry out so much] steam and bake until done, cool fast and then freeze

when you take them out of the freezer, either rinse with water, or spritz with water just to coat the outside and then into a 400 or more degree oven to crisp and thaw. moving from freezer to room temperature in the fastest way will prevent them from staling during the thaw.

so just bake again and they should be good to go, i've done the 2nd one with fully cooked loaves, and the first with small ciabatti rolls.

A fair warning though, once re-baked and cooled, the bread will stale faster, so try to only bake enough for what you need.

Thanks for the info. guys!