For the past year and a half I’ve been trying to generate a healthy dose of steam in my extremely well vented gas oven. Steam that would be present in good volume for at least the first 15 minutes.  My experimentation had mixed results.  The bread tastes great, but I want the appearance be as good as the taste.

One method that did work with some success was SteveB’s.  Alas, my thrift-store aluminum roaster cover is a tad wider than my stone, so I don’t have a good seal between the lid and the stone.

It looked interesting, but I didn’t want to buy yet another gizmo.  So I made my own version by  poking holes through a foil loaf pan (three for a buck at the local dollar store) and setting it on top a layer of lava rocks in the bottom of a metal loaf pan.   The holes were large in the first version.

I experimented with both steaming versions over Thanksgiving weekend using Hamelman’s sourdough formula.

The loaf in the background was baked covered, using SteveB’s technique. Oven and stone preheated to 500F, loaf loaded and covered (the cover was not preheated).  Two shots of steam were directed through the hole in the cover, plus one cup of water was poured into a wide broiler pan containing lava stones (done because of the cover overlap).  I forgot to turn down the heat until I removed the cover, 15 minutes later. Bake finished at 460F.

The loaf in the foreground was baked uncovered.  After loading the bread into the preheated 500F oven (and stone), one tray of ice cubes was placed in the foil tray resting over the lava rocks on the left side of the oven and about 1.5 cups of water poured into the broiler pan containing lava rocks on the right side of the oven.  Temp reduced to 460F.  After 15 minutes the broiler pan was dry and emitted no steam so it was left in the oven.  The foil-trayed loaf pan was removed.  Although I screwed up the scoring on the bread in the foreground, the results looked promising.

I didn’t think the sufficient steam had been generated, so I made much smaller  holes in another foil pan and replaced the original version.

I mixed the same dough the following weekend.  Oven and stone again preheated to 500F.  A  batard was scored and loaded.  This time TWO trays of ice cubes were dumped into the foil tray and 2.5 cups of water poured into the broiler pan w/lava rocks.  About 16 minutes later I removed the loaf pan; I could see the steam still coming off the lava rocks.  I left the broiler pan in, as that water had evaporated.  Here’s the result.

To make sure this was no fluke, I followed the same procedure with the second batard.  It worked again!

I am overjoyed to finally have figured out how to generate an abundance of steam in my oven for those crucial first minutes.

Finally, my bread looks as great as it tastes! Thank you SteveB, David, and all the other fine bakers who have been so inspiring.

If we just keep trying, we eventually get it right. Doesn't it feel good? Those are gorgeous loaves.

Actually, Michael, I have a feeling of relief that I finally did get it right - which feels pretty good.  Thanks!

I use foil between bread and iron pan for decrease heat in my last night baking. It's very good work.

All the breads look great, but finding a steaming method that works for you is super great.

Your holey pie pan was the catalyst for the latest experiment, which proved to be the most successful.

Your good counsel is always appreciated and I'm looking forward to hearing about your upcoming session at SFBI.

Incredible looking loaves!  Congrats on having nailed it!

an abundance of steam in your gas oven.  Beautiful looking loaves and crumb shot, Lindy!

It's terrific to have a place such as TFL where we can learn from the wisdom of others and I sure appreciate all the knowledge you have shared!

Super! Lindy! I am happy for you.. It seems steam isn't what a loaf needs, its humidity. Steam esacpes faster due to its kinetic energy, but humidity keeps the loaf moist.

about the humidity.  My past efforts went out the vent because I apparently wasn't adding enough ice/water to really load the oven.

Thanks so much for your compliment!

I'm really happy when someone fix a baking issue.

These are wonderful looking. Tell me, is there a secret in your scoring technique to consistently get that beautiful knife-edge lip of crust under which the spring forms? Is it just a question of scoring at the right angle? Is all lost if you do more than one stroke over the same area? I'm really trying to improve my technique in this area.

Hi Ed, I just scored the bread with the lame flat to the suface (I use the SFBI blade holder and a double edge razor).  I've never been good with angles.

I don't think you lose anything if you have to go over the cut - but I did mess up on that loaf in the foreground on the Thanksgiving bake shot and recall having to score twice in one spot.

Those are two handsome loaves you've got there, Lindy!

Not only for your comment but for sharing the techniques and formulas for your fabulous breads.  I've not given up on your steaming technique and have a nice big bowl that I need to drill!

I can't wait to try your Bouabsa baguettes again!

and a beautiful loaf too!

Hello LindyD, The batards you've made are perfect!
The photos are amazing - and the crumb....! Wow.
Great job!!!
from breadsong

Your kind comments are appreciated, Eric, Debra, and Breadsong.

Ovens seem to be as individual as their owners and it's wonderful to be able to try the tips shared by others, and even more wonderful to find something that finally works.

Beautiful loaves, beautiful lip and grigne. They look gorgeous, but I'm sure the texture was fantastic too. I personally worry about the crust not so much because of the looks but for the texture. Sometimes I think I bake just for a good grigne, not the taste. Yeah, probably sacrilegious.

Here's my question: When I used lava rocks in a pan, I preheated it all along with the stone. Then while I juggled to put an adequate amount of water and/or ice on the lava rocks, the temperature of the oven dropped too much, which is shy I eventually abandoned that method. How do you deal with that heat loss?

I think there's always going to be heat loss any time you open the oven door, but if your stone and oven are well preheated to 500F (or the top temp of your oven), I think you can mitigate heat loss a bit by doing a mise en place with whatever you are going to use to steam the oven, and thinking about what you'll do before  you do it.

When I first tried adding ice cubes, I wound up dropping them on the oven floor, on the stone, and everywhere other than when I wanted them to land because I was in such a rush.   One got stuck between the floor of the oven and the door and had to be fished out.  The next time I was more focused (and wore OveGloves to handle the ice), and the process went much quicker.

As for pouring water into a pan, that's not been a real problem so long as I wear long sleeves and an OveGlove.

I preheat at 500F for at least 45 minutes; because oven thermometers don't react quickly, I'm not sure how much heat I do lose, but it's not adversely affected the bread.

What happens with your dough?

I bought the biggest and longest sink "tailpiece" I could find at my local bigbox hardware store. It's a very thin metal pipe 1.5" in diameter and 12" long. I also bought a dead-end clamp (a rubbery cup with a hose clamp around it), and used it to close off one end of the tailpiece. (Thus I built what can be thought of as a very tall, fairly narrow, "tumbler" that's not affected by heat.)

I stand the pipe in my sink (the dead-end clamp is flat so it stands up), put my steam water in the pipe, open the oven, pour the water into my pan, and close the oven door again. Because the pipe is so big and so long, it holds way more than a full mug of water, and can pinpoint pour it even in the back of the oven in less than three seconds. It's so quick I don't have to worry about my oven losing heat.

(Also, even with extra-long oven mitts, I like the safe feeling of having my hand so far away -often outside the oven altogether- from where the water is being poured and the steam generated,) 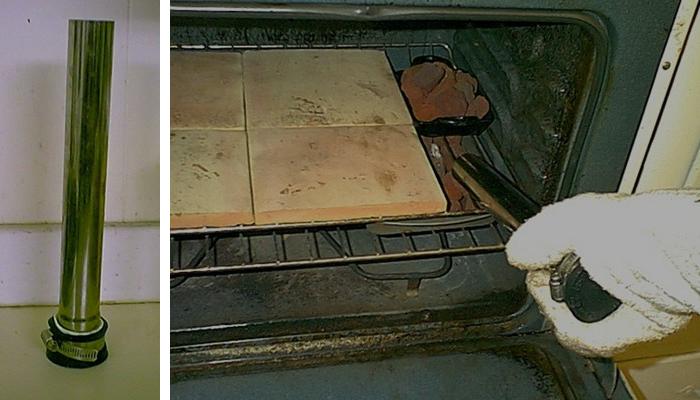 The open cuts say it all.  I've found my saving grace in Sylvia's steaming method; I'm so pleased you've found one that yields such splendid results.

The timing was perfect, as I was really getting discouraged.

How sweet it is!

While I've been rejiggering my formulas I'm also having to re think how I steam my oven.

We all know what works for some, doesn't work for others - so one more thing to try.

Once I get by the seasonal candy making/gift wrapping/cookie baking rush I'm going the get back to serious bread and try this...

Judging from your last baguette posting, you're doing very well with your new oven!  That was a pretty nice ear I saw.

Lindy,  This has been a struggle for me .   I just haven't been able to get the right look for instance to pain au levain that I see in other posts and I have been fussing with rise times and so forth.    Your pictures are exactly what I've been striving for and missing.   I had never really considered that the steam would make such a difference.   I am going to follow your instructions to the T.   Thanks for the great post and congratulations!

We sure shared the same frustrations, Varda, so I know how you feel and how discouraging it can be.

In my case, I didn't realize how quickly and efficiently my oven vented until this fall, when I would steam the oven and my windows would fog up nearly immediately.  I guess what I've managed to do with the two trays of ice cubes and 2.5 cups of water is to put so much steam in the oven that the venting is slowed down, thereby retaining moisture for that crucial first 15 minutes.  That's my guess.

Another thing I changed was my shaping method.  I really like how Ciril Hitz shapes and his video on shaping a batard has enabled me to get a tighter sheath.

You've baked some pretty nice breads, Varda, and I appreciate your remarks.  Just keep experimenting with your own oven and you'll find that sweet spot!

I just watched the Hitz video.   He uses a completely different method for batards than I have been (I've been trying to use Hamelman's detailed instructions, but I haven't been satisfied with the results.)   So I will try to learn this new way.   Thanks for the link.   It's great.   And for the encouragement.