On Sunday I baked seven loaves of bread, most of which we plan to sell at a church bake sale next week.

A while ago I cut some letters out of cardstock to spell the word 'hope', and I've used them as a stencil many times. (My wife and I put on an annual fundraiser called Georgia's Journey of Hope. I've been using the stencil on bread that I give as thank-yous to the volunteers for the fundraiser.)

So I decided to reuse the stencil for the church bake sale. I really like the way it turned out. (Note it's like a reverse stencil, i.e. it's just a bunch of letters, so on the bread the word is the part that doesn't have flour. This is easier to cut out, and I like the look better.) Due to lack of proofing space, one loaf ended up round and didn't have room for the stencil, but no problem, I just scored a cross. 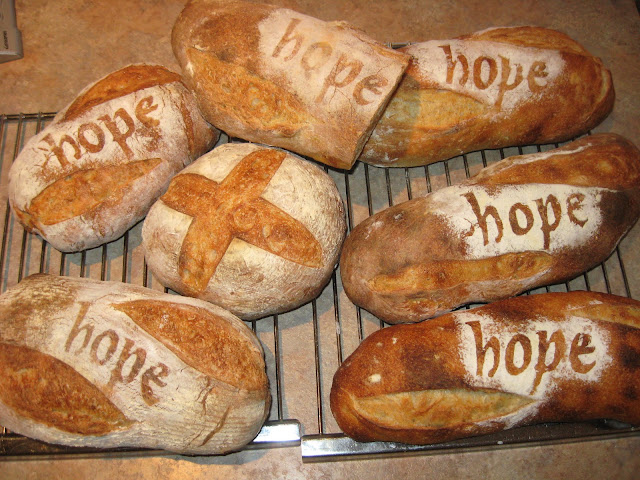 Of course, one loaf we cut into because we couldn't resist, leaving six to be frozen for next week's bake sale.

The recipe is Susan's Norwich Sourdough, altered slightly and doubled (thank you IKEA for the giant stainless bowl I got this summer -- I could probably triple Susan's recipe if I wanted to, although that'd be 3kg of flour to mix and my arms would probably give out). The alteration was to use about 3.5% kamut flour and 3.5% rye flour instead of 12% rye, making up the missing 5% with AP flour.

Forgot to mention, doing that much bread, with the attention to detail needed for the stencil, a couple times I forgot to score the bread until after it was in the oven. So I scored it in the oven!! (wearing oven mitts for sure).

I actually got a nice grigne on the loaf that had been in a few minutes before scoring! (lower right) But I wouldn't recommend making a habit of it ... very high burn potential.