Sunflower seeds is a favourite of mine, whether it's in dense Vollkornbrots or lighter sourdough breads. I've toyed around with different formulas for seeded levains for some time, but my best one so far is the one I tried this weekend. The formula is not unlike Hamelman's seeded sourdough bread, but the one I've settled on, uses a rye sourdough and some more whole-grain flour than Hamelman. The dough is not particularly wet, but rather straight forward to work with. It's another one of those that can easily fit into a "mix in the morning and bake in the afternoon" (or vice versa) schedules. Here's a copy of the formula, and below is a shot of the loaf I baked Saturday morning: 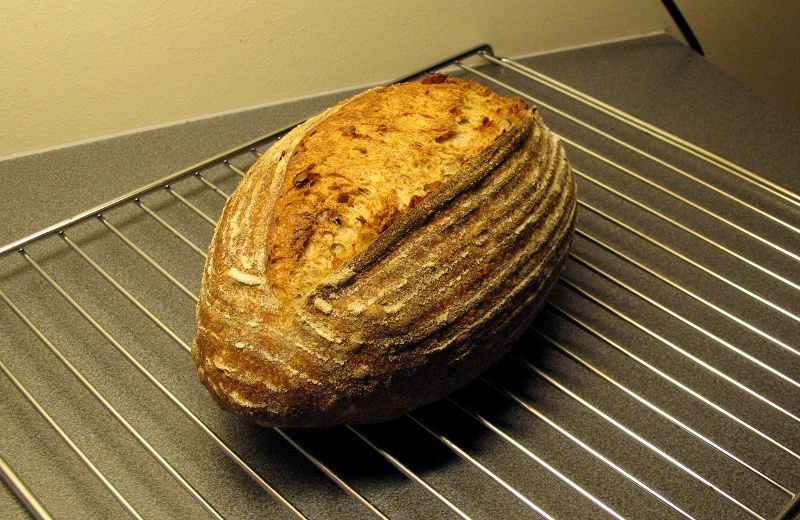 And here's a shot of the crumb: 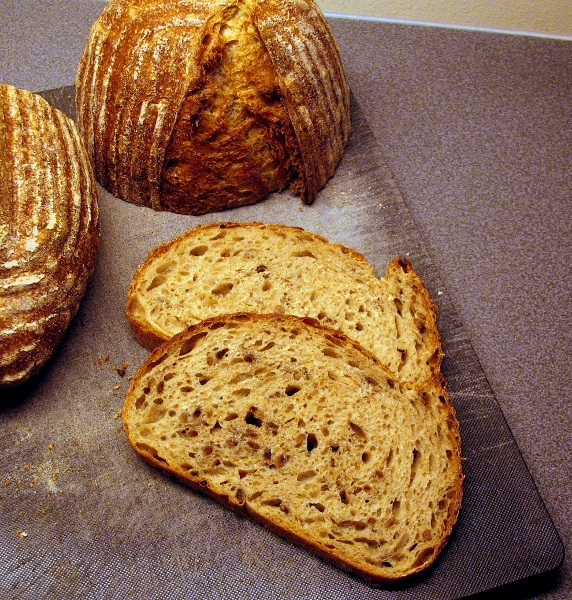 Feel free to vary the toasted seeds - pumpkin seeds is next on my list :)

Earlier in the week, I suddenly got this weird craving for brandade... Yes, I know. Pretty weird. I have a sneaking suspicion that it's the ongoing strikes in France, that I've followed closely via the news, and some reports from Marseille (where I had my first ever brandade de morue two years ago), that set it all in motion. You'll find salt cod in most well-stocked Norwegian grocery stores, so have a bowl with plenty of cold water ready, and let the salt cod soak a day or two: 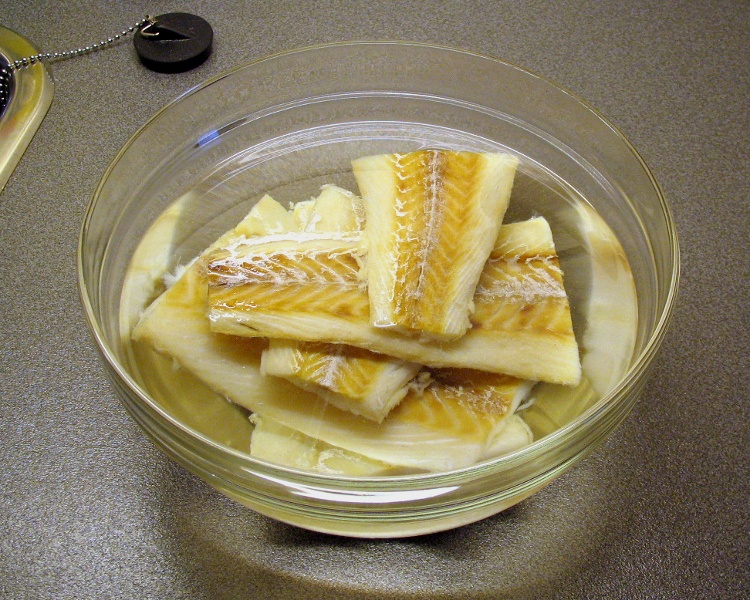 I think my first brandade de morue had some mashed potatoes in it, but to be honest, I prefer brandade made with just the fish, cream, olive oil and some seasoning. I love the smooth, creamy and light consistency of brandade, especially on toasted slices of baguette or a seeded levain. You can easily use a food processor to get a smooth, even brandade, but I prefer to make it by hand so you still have small flakes of fish meat intact. 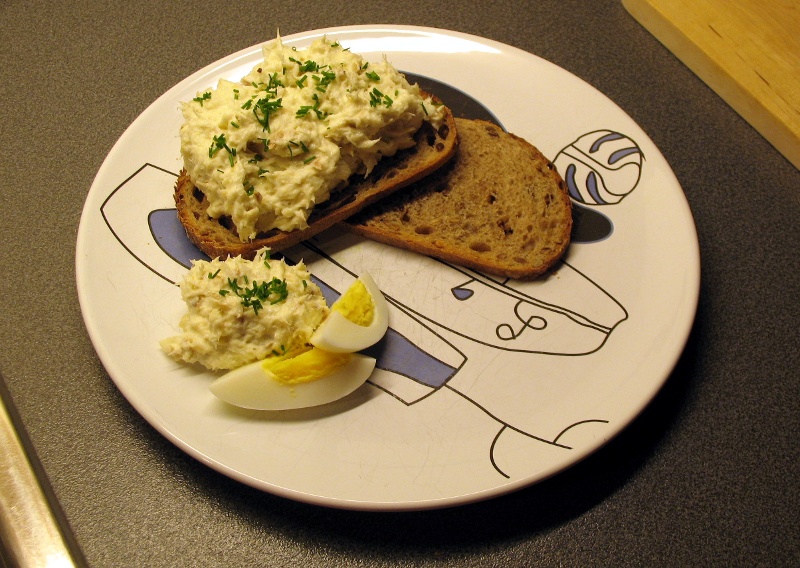 Over the weekend, I prepared another French favourite of mine: A pear frangipane tart. Almonds and poached pears is one of those timeless flavour combinations that work any time of the year. 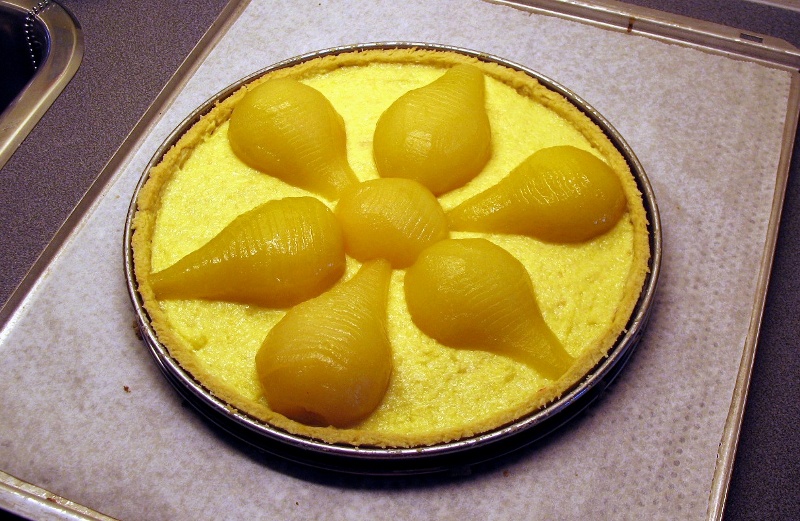 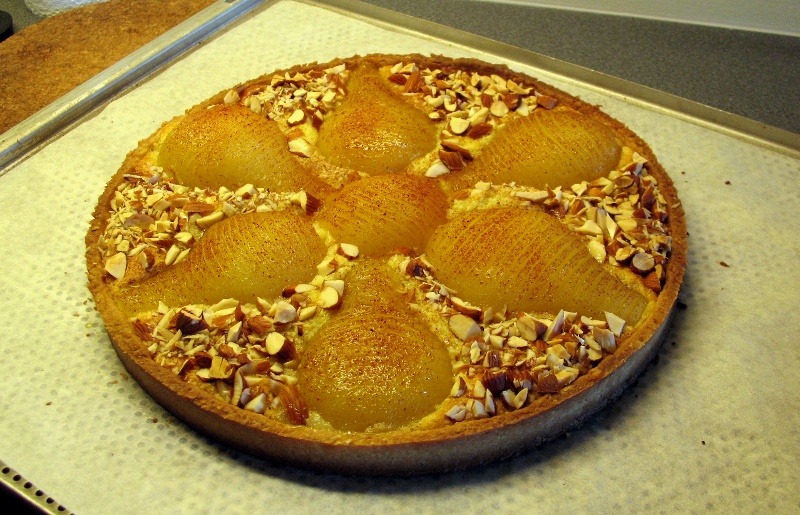 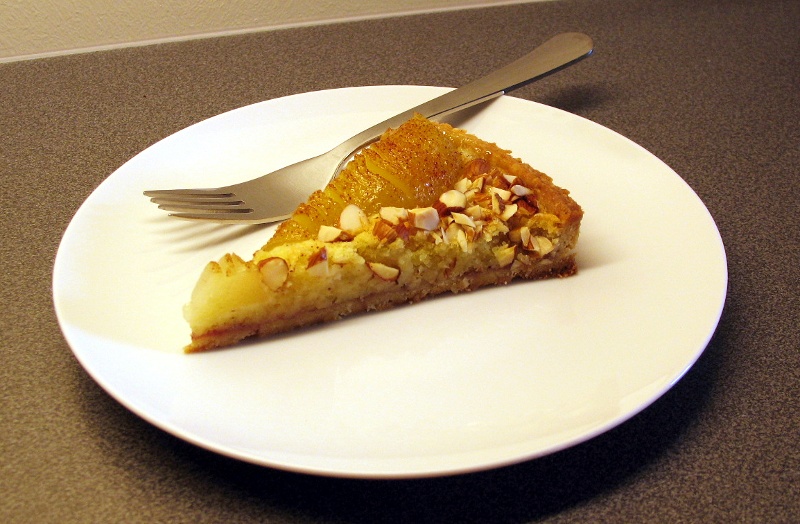 OMG, Hans, that is torture! bread and desserts..

I am  impressed with your perfect baking. I copied all your recipes that you posted here and I tried some of them were terrific although my loaves were not good as much as yours, of course. But I like your bread a lot.

Thank you for sharing with your wonderful recipes!

Thanks Khalid and Akiko!

Let me know what you think once you've tried it. I'm very happy to hear that you're enjoying the formulas, Akiko!

Another gorgeous loaf, thank you for the recipe! Salt cod brandage..OMG..I love, crave and have to limit myself on cod sandwiches, usually being Irish they are fish and chips style, with extra malt vinegar, your brandade salt cod is fantastic looking and with a hard boiled egg garnish.  Oh how delicious!

Dessert, my weakness!  I have been watching my goodies and this one is fabulous and so pretty...I have a bowl of pears and have been just making pear salads with blue cheese, candied walnuts, butter lettuce/fennel to statisfy my sweet tooth.  I'm not going to be able to resist much longer, what a gorgeous frangipane tart, every inch of it!

What a coincidence, I made a similar tart just recently, one of those delicious classics. Yours looks perfect!

I loved the brandade de morue I had in Arles too many years ago. I've been looking for the low-calorie version without success. <sigh>

Strange as it may seem, we don't have many Norwegian groceries in Central California, but salt cod is available at Whole Foods and other groceries. We do have a sizable Portuguese population, mostly dairy farmers from the Azores.

do we live, Hans, as your beautiful tart demonstrates.  I think you've earned the title of tart-meister here on TFL.

But not to overlook the pain au levain.  Sunflower seeds have become a favorite of mine, especially in ryes.  They have the ability it to bring out what is best in the flavor of the flour without overwhelming.  Gorgeous looking crumb there.

It all looks quite delicious Hans.

Your breads are always perfectly baked and while I don't think I've ever seen brandade on a Northern Michigan menu, it looks quite tasty.

I'm intrigued by the pattern on your pears.  Was that done by a peeler?

Thank you so much, everyone!

David: I've been looking for that low-calorie version too, but to tell you the truth, it's like looking for bin Laden. I'm not sure it even exists... How was Arles, by the way? A couple of years ago, I was privileged to get to spend some time in the area around Marseilles and Aix-en-Provence, and that's left me wanting more. If you can recommend some nice destinations in the southern part of the country, I'm all ears. Thanks!

Lindy: Thank you! Once the pear halves are finished poaching, I blot them dry with a piece of paper towel, and cut them crosswise with a sharp knife. Be careful not cut all the way through the pears - you still want them attached to the stem on the flat side. Fan slightly, and place on the tart. The cuts make for a nice visual effect once you've sprinkled the pears with some cinnamon sugar and baked the tart. Thanks again!

Thanks for the explanation, Hans.  Out of curiosity, I used "pear tartine" and "pear tart" in a Google image search.

After looking through over 13 pages of each search, I found not a single example of the cutting technique you use.

just have to say the brandade looks so delicious with the flaky texture which i like too. And the tart looks very tempting. I like neat tart walls :))

be proud for yourself mate! Bread looks stunning so as the cake!

Great loaf and tart, Hans! I had planned to try your pain au levain (what can I say? I developed a sudden craving for it!) but tweaked it to include toasted sunflower seeds based on your latest bake: 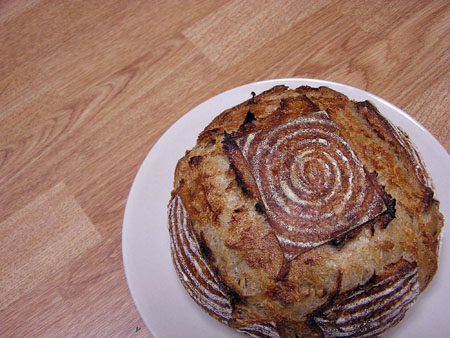 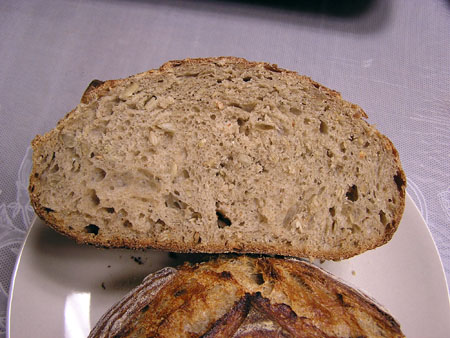 My crumb ended up being a bit tighter than that of your loaf, but it tasted nice and wheaty with a slight tang from the sourdough. I also love how the toasted seeds added a nutty aroma and flavour too.

Adding pumpkin seeds is a great idea - I'm going to try it for my next loaf, and thanks again for sharing the recipe!

I'm very happy to see that you had such success with the recipe - well done! The crust looks terrific - signs of a bold bake.

i tried your recipe here. The recipe made a very tasty bread! It disappeared in no time! Thank you for posting it!

Hi Hans. I must have missed this post. Just found it through Kahlid's link on his recent post in which he featured some fantastic pics of his bake of your seeded levain (which I've just promoted to the top of my must-bake list!).

May I ask, do you soak the sunflower seeds a la Hamelman's 5 Grain Levain, or simply toast them and add as is?

Re toasting: I assume you just put the seeds on a baking sheet in a moderate oven until they brown?

I don't soak the seeds that go into this dough. For loaves based on this formula, I typically choose sunflower seeds, pumpkin seeds or sesame seeds (or combinations of these). I toast these seeds either on a baking sheet in a moderate oven, or simply in a skillet over medium heat. If using a skillet, make sure you swirl the seeds around quite a bit.

Other seeds, such as flax seeds or rye chops, definitely benefit from soaking beforehand, so you might want to modify the original formula if you'd like to use these.