I baked this bread for the second time and made a couple of changes. Here is the ingredient list as printed.

Changes I made were to use instant yeast and reduce the quantity to 1 tablespoon, next time I'll use even less.

I left out the 1/2 cup warm water and used 3/4 cup buttermilk (made from Saco "Cultured Buttermilk Blend" powder) plus 3/4 cup of non-fat milk. My 4 cups bread flour at 120 grams per cup with the 1.5 cups liquid was plenty wet enough without the water. I couldn't find anywhere that Beard defined what a cup of flour should weigh.

I also cut the salt in half and used canola oil for fat instead of butter.

I did a 20 min autolyze, then mixed in the oil and salt for a few minutes, then did a couple stretch and folds after 30 and 60 minutes and shaped after another 30. The dough more than doubled in the first 30 min. (I took out 75 gr of dough to make a small roll since last time the quantity (about 920 gr) seemed to much for my 9x5 pan.)

Dusted top with some sifted flour and proofed about 45 min which may have been a little too long as dough had not only domed above pan but was starting to hang over the edge. Fortunately that sprung up in the oven to make a nicely shaped loaf.

Baked at 375 for 40 min, removed from pan and left in the cooling oven for 8 min (on its side, as recommended by Beard).

After cooling I sliced this and I can tell you it smells wonderful.

Here is the loaf cooling. 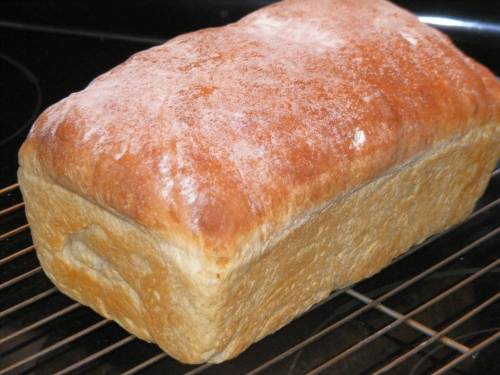 And here is the crumb close up shot. Looks good to me! Note the knife dragged some of the flour from the top down into the crumb. I didn't notice this until uploading the pic. 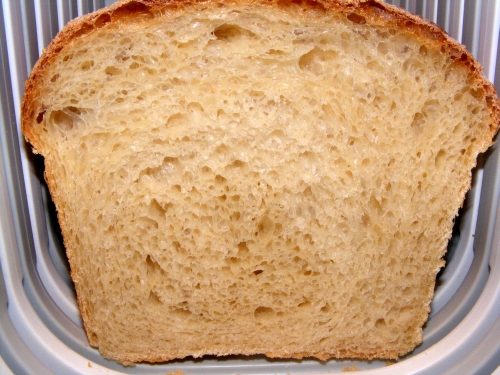 I'll add a taste update after I have some for lunch.

UPDATE: Really enjoyed a sandwich at lunch. This was better with the half buttermilk half non-fat milk. I think I'll cut back the salt a little more to 1 tsp and reduce the yeast a little as well.

used buttermilk in a bread recipe before, just pancakes.  These loaves and tthe buttermilk loaves done by raynel using The Laurel Kitchen cookbook look drop dead gorgeous.  I've got some buttermilk and I'll try both recipes (probably different days, however).  But, I need a good standby sandwich loaf.  I'll let you know how they turn out Wayne.  Thanks for the posting.

This is my go to white bread. But, I just use Beard's Recipe..with real buttermilk and butter. I use instant yeast.   With older volume recipes it is always the flour that is added or subtracted to get the right texture. I convert this type of recipe(s) by using the lowest flour volume called for and combine all the liquid. Then i weight the measured flour and weight the measured liquid so that I am no longer using volume. I always add the the water that was used to proof active dry yeast to the other liquid (milk,etc).  It makes a difference. Then I add the liquid to the flour until the bread consistency is correct.  Then i weight what remains of the liquid.  Then I have an idea of the baker's percentage. When you see the baker's percentage, it is obvious where you need to round up or down.  Beard has some very good bread recipes.  Pam

So glad to see James Beard's Bread Book being used.  It's one of my favorites.  I even love the drawingw through out.  His book on Pasta is just as good. Your bread is beautiful!

I love the gingerbread in this book.  I highly recommend it.  The one change I make is adding more ginger.  I use 1 heaping Tablespoon instead of 2 tsps.  I bake it in individual tart forms. It makes about 17 of them.  Great for a crowd or gift giving.  YUM!