Tales of doing every mistake you can do

A few days ago I've finished reading "Bread Science" by Emily Buehler. This book is really enlightening. It offers a very visual idea of what is happening in the dough during the different stages of making bread. Instead of wondering why the dough is starting to get wet and loose during kneading you are thinking: "Okay, now I have broken all the remaining disulfid bonds and therefore overkneaded it".
Having strenghtened the faith in my own abilities by reading the book, I thought "Okay, great! Now I have all the knowledge to do gorgeous breads without ever needing recipes again!" Needless to say, subsequently I would have been punished by being overly confident :).

So what kind of bread did I try to do? After having focused on doing basic white breads for several weeks I starved for eating some more local-style enrichened rye breads with a lot of seeds and other ingredients. Okay, so without caring about finding a recipe, I prepared my rye sourdough by feeding it in three stages and created a soaker with oat flakes, sunflower seeds and pumpkin seeds. When I was going to mix the dough the next day, I realized: "Oops, I already used more than half the water for the soaker, there won't be enough left to properly hydrate the dough for the autolyse!" Thus I ended up having a hydration of about 110% percent instead of the aimed 80%. It was quite a mess. When I added the soaker in the end phase of kneading, it was quite difficult to mix the two loose masses together. Consequently, I ended up kneading for a much longer time than I planned to. You might guess it: I checked for the gluten development by doing a windowpane test and and it wasn't only smooth and translucent but actually really glassy, without any space for further development. The dough already began to release water. "Oops, overkneaded". Although already totally discouraged, I put the paste-like mass into a bowl for the bulk rise. I was aware of the gluten being more than fully developed and thus additional folding having a destructive impact on dough stability, but decided to to a stretch & fold anyway. Indeed, it helped to get the mass to a little more dough-like structure. However, soon I had to pay the price for it when I wanted to shape the boule. There wasn't any elastic gluten structure left. The moment I tried to create some surface tension, it tore apart, giving a moon-crater-like look. I put it into the provisionally made banneton (a plastic bowl with a floured towel in it) anyway and let it rise, followed by a retardation in the fridge. Turning it on pizza peel the next day, it unexpectedly still had a little bit of strength left. Of course I destroyed the remaining bones and muscles buy trying to score it, which I definitely shouldn't have done, resulting in the dough flooding all over the peel. Again: "Oops!"

Well, I've learnt a lot of things. Firstly, When being in baking euphoria, don't forget to actually plan ahead carefully what you exactly want to do. Secondly, reading "Bread Science" gave me the ability (or at least moved me further into the direction of gaining this ability) to realize what I'm doing wrong the moment I ... am doing it wrong. The book even encourages to do mistakes on purpos, to, say, intentionally overproof a loaf and then touch the dough just to learn how it feels like and how it has to feel the moment before it is overproofed, the perfect one for loading into the oven.

I have baked the bread anyway, so here are some pictures. As you can see, the completely destroyed dough surface made the bread flatten out pretty much, resulting in a bread with only a height of about 6,5 cm (2,56 inch), but to be honest I have already seen comparably flat rye breads in local bakeries. I will cut it in a few hours and present cumb pictures later the day, as I've learnt that breads with higher rye content need some time for the flavour to fully develop and for the acids to set.
I will definitely try to do this bread again, provided it tastes good which I don't know yet. 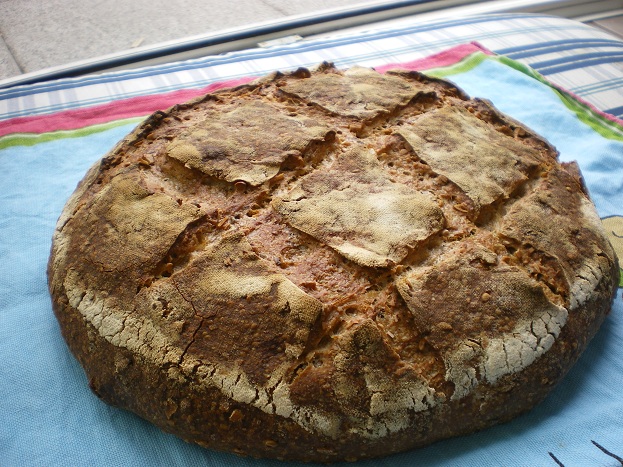 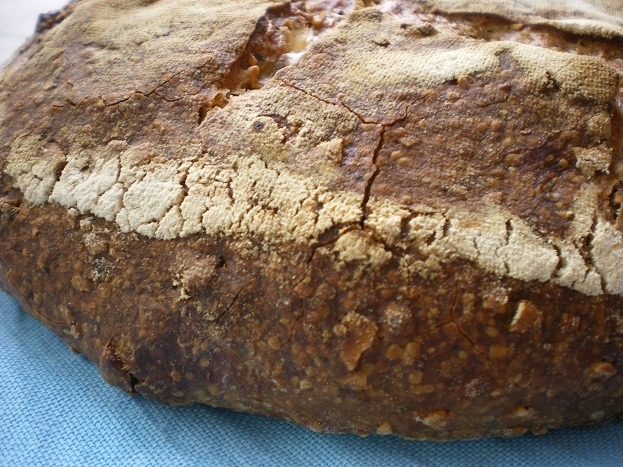 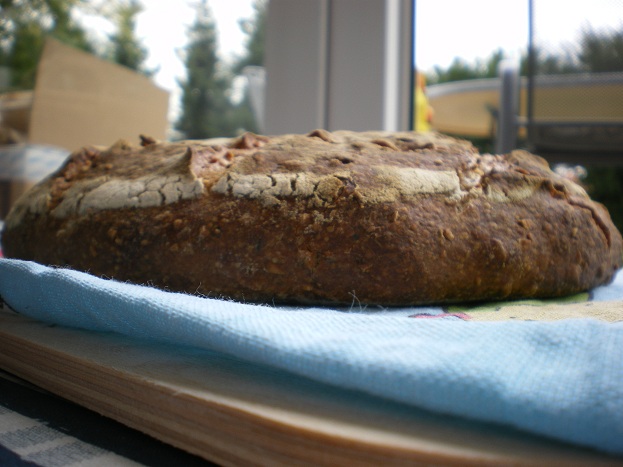 Edit: Since I wanted to have bread for dinner and I wasn't sure if my baked loaf was okay inside or if I would have to buy a loaf I quickly checked the crumb. It was better than I expected! I am actually quite pleased with it (I know your eyes aren't focussing on the bread right now!). 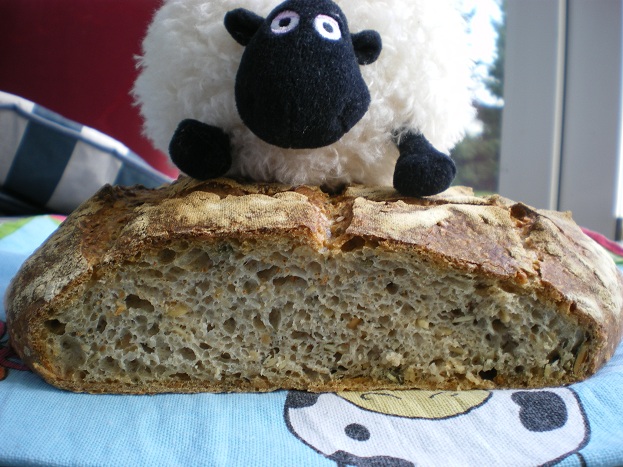 I don't have time right now, but I may add a provisional recipe later if I am satisfied with the taste.

Thank you for telling us about your great experiment!  The crumb looks awesome!!

I will be interested in this recipe if you are satisfied.

Unfortunately I had a foodborne infection the last week, originating from eating bad olives. My stomach didn't really allow to eat anything for several days, so I didn't try the bread and it was eaten by other people. So now I don't know if I would have liked it. But now that I am starting to feel better I will do new baking attempts in a few days or so.