I've seen so many beautiful loaves here on TFL, with beautiful open crumb. When making dough by hand I know I'm adding too much flour to overcome stickiness when kneading. Guess what? No holes. I have shied away from the really wet doughs not really knowing how to handle them.

I recently saw a video by Richard Bertinet where he demonstrates his method for working sticky dough:
http://www.gourmet.com/magazine/video/2008/03/bertinet_sweetdough

I found this video very encouraging, and now want to give a wet Ciabatta dough another try.  I read through various formulae and methods, to see how they meet the following criteria (what produces big holes in the crumb, as written by Rose Levy Beranbaum in The Bread Bible):

a) acid dough (use of a dough starter and a long cool rising)
b) underdeveloped gluten (from less mixing time)
c) high water percentage, to create a very wet dough
d) a slow rise
e) gentle shaping
f) an overnight rise of the shaped dough in the refrigerator (not applicable to Ciabatta?)

I decided to try Eric Kastel's Ciabatta formula as I've liked some of his others, and because there are similarities to Hamelman's formula, which gives me comfort (any Hamelman formula I've tried, so far, has produced really good results for me).
Kastel also writes about a double-hydration mixing technique that sounded interesting (discussed below).
Instead of 100% bread flour as Mr. Kastel's recipe indicates, I substituted 50% bread flour and 50% Type 00 Italian flour, to mimic 'ciabatta' flour, as shown in Mr. Bertinet's Ciabatta formula.

I saw different methods in different books, and tried to take bits and pieces from a few, to try to address the conditions needed to create big holes in the crumb:

a) Kastel's Ciabatta uses a poolish that ferments for 12-14 hours prior to mixing the dough.

b), c) Kastel's Ciabatta uses a double-hydration mixing method, using only 80% of the final dough's water for the initial mix (in the bowl, by hand for 4 minutes), then adding the remaining 20% of the water in thirds, continuing to mix by hand until each addition of water is absorbed before adding the next. Kastel writes the purpose of this is to allow some gluten to develop, while the dough is firmer and before the dough is completely hydrated. (Water is ultimately 81% of flour weight in Kastel's formula).
Kastel advises that Ciabatta is a delicate dough and shouldn't be worked too much; Bertinet instructs to work the dough until it is supple and elastic; Hamelman says after mixing there should be some 'muscle' to the dough. I decide to go with Bertinet's more vigorous working method, partly because I want to see if it works, partly because I'm using some lower-protein flour, and not 100% bread flour, and because I trust Hamelman and his mixing recommendation. I turned the very wet, soupy dough onto the counter from the bowl and tried to do as Mr. Bertinet instructs. I mucked around (literally) for 10 minutes or so and got the dough to a stage where, while still very soft and sticky, had a bit of spring to it and would leave the counter in a cohesive mass when I picked it up. I am hoping that stretch and fold will make up for any deficiencies in my mixing or working of the dough.

d) Hamelman's bulk fermentation, at 3 hours, is longer than Kastel's instruction. I decide to wait it out for the 3 hours. When preparing for mixing, I made some formula adjustments as I was planning to let the dough bulk ferment for longer -  I wanted to slow down the rising - so used 1/3 less yeast (why 1/3? Only a guess). I also adjusted the salt to be equivalent to the percentage used by Hamelman as I really like how Hamelman's breads taste (I think they're nicely salted, and Kastel's recipe had a higher salt percentage).

e) All the authors recommend using lots of flour and being really gentle with the dough when shaping.
I sifted a heavy coating of flour on the counter, gently turned the dough out of its rising container, and sifted more flour on top. I cut the dough into three strips. Shaping one dough strip at a time, I pushed the sides together as Rose instructs (to create the wrinkled look on top of the loaf), then inverted bottom side up. Then I gently picked the loaf up and stretched to lengthen it slightly while placing on parchment paper.

f) Kastel's final proof was for 20-30 minutes, and Hamelman's was for 1-1/2 hours. I chose the longer timeframe for proofing.

I followed Hamelman's baking instructions, 460F then 440F, and baked on a baking stone with steam.
I found the loaves were really browning so reduced the oven to 400F after about 18 minutes in the oven.

Here's how they turned out: 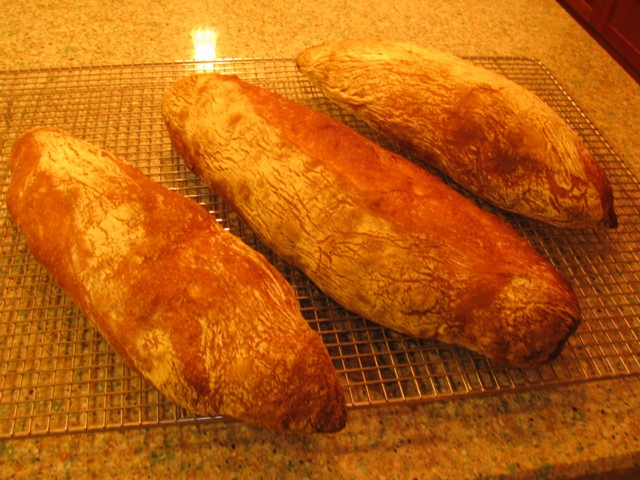 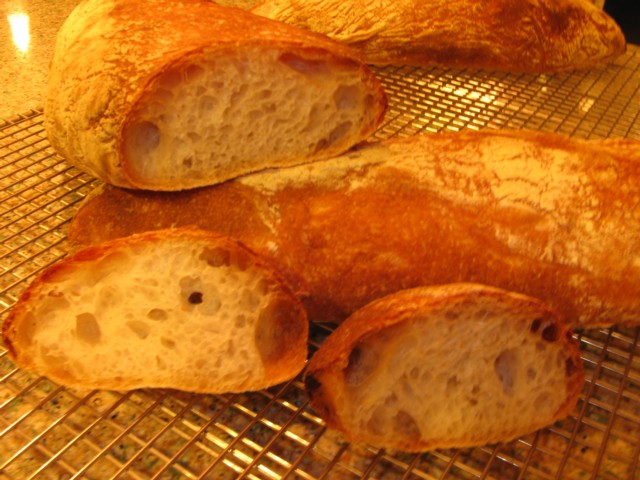 When I sliced the bread, the crust sort of splintered.  It's a very crisp crust. I am eating a piece of the bread right now as I finish this post...and the bread is good!
I am not sure if the crumb is as open as it could or should be, but it's more open than anything I've made yet, so for that I'm grateful!

nice, Breadsong! Successful Ciabatte if you ask me. You also have a talent in marrying different authors instructions.

You are on the right track, breadsong.