Loaves for my love, inspired by guro and farine

Loaves for my love, inspired by guro and farine

Hello, My 20th wedding anniversary is this week so I wanted to bake something special for my husband!

guro baked a Caucasian loaf recently on thefreshloaf which I thought was so beautiful. I tried guro's method for shaping, with Ciril Hitz's Basic Sweet Dough (I added a butter, cinnamon & brown sugar filling).  Ciril Hitz's sweet dough rolled out like a dream - I think my dough rectangle stretched to 30"x20" & was very thin.  After shaping, I nestled the dough into a heart-shaped springform pan which was set on a parchment-lined baking sheet. I cut strips of parchment to line the insides of the heart pan too, so the dough wouldn't stick to the sides - this worked quite well and the pan released easily. I think the shaping method is similar to a Russian Braid and it was fun to try. 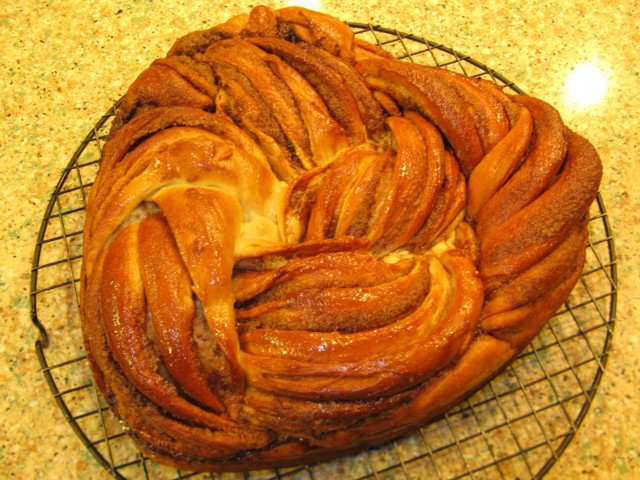 I've been wanting to try making Jeffrey Hamelman's Five-Grain Levain so I thought this would be a good occasion! Yesterday I started preparing, building the liquid levain and soaking grains. I mixed the dough this morning, shaped it (with thanks! to dmsnyder for his Boule-shaping tutorial, and Floydm for his batard-shaping video), and retarded the dough for about 5 hours prior to the final proof. I wanted to try stenciling the boule prior to baking, and was inspired by farine-mc and her technique she describes well on her blog:
http://www.farine-mc.com/search/label/Stencil

To try and mimic farine-mc's technique, I cut two hearts out of a piece of parchment paper and set this aside. I placed a round plastic lid on top of a boule and sprinkled flour around the edges. I removed the plastic lid, carefully misted the center, and centered the parchment paper with the heart cut outs over the loaf, sprinkled flour to fill in the hearts, then carefully removed the parchment paper, trying not to spill any flour onto the loaf. I tried to slash the loaf like farine-mc did for her Stenciled Miche. Here's how the Five-Grain Levain loaves turned out: 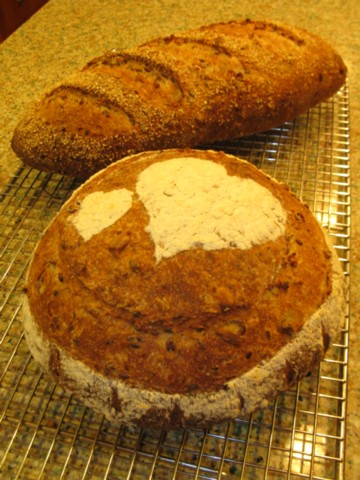 I was really happy with the Five-Grain Levain's oven spring and look forward to making this one again. I don't have crumb shots yet because it's "not quite" our anniversary but will cut into the loaves soon. It's so hard waiting!  With thanks to the authors and breadmakers, whose ideas and knowledge shared are so appreciated!

Thanks so much for your compliments and anniversary wishes!  Husband was really happy to see these (especially the giant cinnamon bun) coming out of the oven, just for him.  I like it when things turn out looking nice; sometimes I think it's luck despite the best efforts of those who try to teach, here and in books!
I've turned out some ugly stuff too and maybe one day I'll have the courage to post the ugly ones when they happen (& trust me, they will!) and ask what went wrong! :^)  Regards, breadsong

Thank you for your compliment and nice wishes.

Very pretty loaves Breadsong, and congrats on your 20th! Many more to come.

Hello, Thanks very much!  He likes it when I bake just for him. A certain amount of baking leaves the house in the form of 'gifts from the kitchen'...and he rarely grumbles (I'm really the lucky one!).  Regards, breadsong