I used Daniel T. DiMuzio's formula from his book 'bread baking An Artisan's Perspective' for making his Double Raisin and Toasted Walnut loaves, changing it to go with a combination I have been wanting to taste.  I substituted the double raisins and walnuts with, half the amount of dried natural, chopped Blenheim apricots, a very big favorite of mine is the Blenheim apricots from CA. especially fresh.  I also added 1/2 cup of Millet seeds for a little soft crunch.  The combination is delicious with the apricots not being overly sweet like raisins can sometimes taste.  The little soft crunch and mild flavor of the millet seed was an added plus, all went delicious toasted this morning with a smear of cream cheese.  I was very pleased with the combination of the apricots and millet seed and plan on trying it in some other recipes.

These loaves were baked yesterday with the Greek bread I posted earlier.  I baked both the apricot and millet seed loaves together and wanted to steam them with my steaming lid, I have not used in a very long time.  The two loaves would not fit under the steaming lid, I did not want to stay up any later and bake them individually, so they were not properly steamed which I think contributed towards the paler crust on the second loaf. 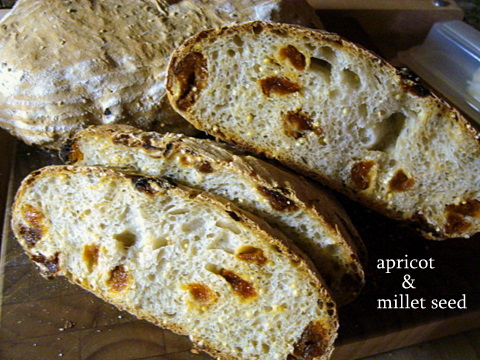 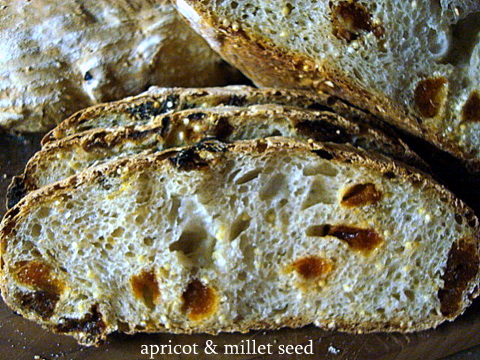 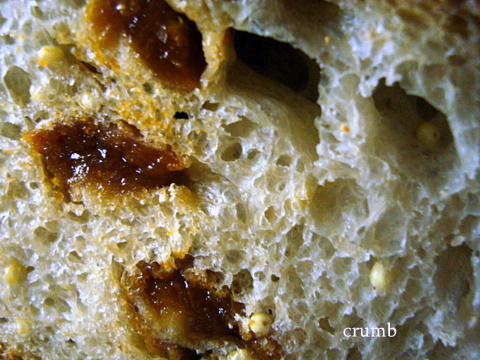 You know, I've been using Dan's book mainly to learn more about bread and bread chemistry.  Thank you for reminding me that the back of his book has some really interesting recipes.  Time to dip my big toe in.

I suspect the apricots are more subtle in flavor than the raisins?

It seems I can find just about anything I want in Dan's book.

I have to admit...my favorite way for apricots is fried pies by a mile. Apricots bring back many fond memories to me.  But at least putting them in bread stays off the urge..and I mean terrible urge to make some fried pies.  I just have to make them once a year..they are just to good, I could eat one everyday.  They are more subtle than raisins in the bread..but boy do they burst in FP's.

Ex-girlfriend from southwest Virginia used to make fried pies with reconstituted dried apples.  If we hadn't split up I'd look like the Michelin man.

Very interesting combination... I like it!  Great looking crumb.