I have not done much baking in the last month and a half since my Father suffered a stroke. After a brief stay in the hospital, he was moved to a rehabilitation center for speech, occupational and physical therapy. Subsequently, our days were busy with work, shuttling my mother back and forth from her apartment to the rehab center where she would spend all day with him and preparing dinner for her in the evening since she was too tired to even think about herself. Unfortunately, because the stroke had affected his speech and ability to swallow food, he was progressively getting weaker and complications set in until he was moved back to the hospital where the doctors told us that basically they could not do anything else for him. We moved him to a Hospice Center in the Washington area a week from this past Tuesday, a beautiful and peaceful place.

Since all my siblings and their families were in town to visit my Father and to comfort my Mother, this past Saturday morning, I made two batches of dough for a family dinner. One was a white flour Baguette dough with liquid levain and the other was a high extraction Pain de Campagne dough with liquid levain, both intended for overnight cold retardation and baking on Sunday. The doughs had just gone through partial bulk fermentation and were put in the refrigerator in the early afternoon. We headed to the Hospice Center to spend the afternoon with my Father but upon arrival, learned that he had just slipped away peacefully. He was 91 years-old.

The next 3 days were a blurr with so many things to attend to. The funeral and cremation occurred on Tuesday July 20. It was preceded by a heart-warming Buddhist Ceremony and gathering of many Relatives and Friends.

Yesterday, we finally had a day to wind down when I realized that the doughs after three and a half days were still sitting in the refrigerator waiting to be baked. They had tripled in size and the high extraction dough had rendered some liquid. Since we had planned a Family Dinner yesterday evening, I decided to go ahead and bake them anyway and share them with my Family in memory of my Father.

The doughs had become very extensible to the point of becoming limp. As my head was still preoccupied with so many thoughts, by mistake, I baked the high extraction dough as Baguettes and the white dough as a Batard.

The Baguettes did not have the usual oven spring but the taste was surprisingly sweet and nutty. The crumb was a little bit denser but not overly tangy in spite of the extensive retardation. The Batard had much better oven spring and the crumb was open, slightly chewy and again not overly sour. We enjoyed them with a perfectly ripe Camembert and toasted to the memory of my Dear Father and Mentor, the man who taught me so much about the enjoyment of good food and wines. 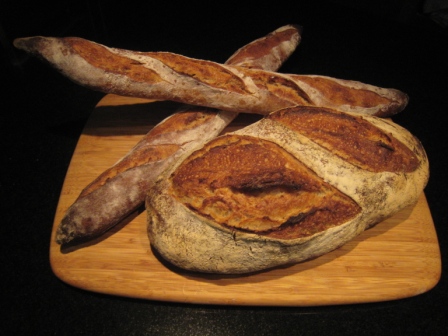 I am so sorry about your father. I am sure he would've loved your beautiful breads. Take care of yourself.

Sorry to hear about your father's passing.  Your breads look beautiful.  Hope things settle down for you and your mom.

Please accept my sincere condolences on the loss of your father. I wish I could do something to lessen your pain. But as least you know my thoughts are with you and your family as you grieve. Please keep baking.

Wonderful breads don, I'm sorry they could not be enjoyed under better circumstances.

All the best to you and your family,

Sorry to hear of you and your family's loss, Don.  My sincere condolences.

A most beautiful and touching tribute to your Father, Don.

I know you will miss him deeply, but that that your memories will bring you comfort.

Deepest condolences to you, your family, and all who loved him.

Your loaves are a fitting tribute to your father and mentor.  I'm sure he would be proud of the fruits of his own labors.

My sincere condolences to you and your loved ones.  It was nice that you were able to share your bread with family.

I'm sorry to hear of your father's passing, Don. From my own experience with my father's death, having family together at such a time is a great comfort.

I am so sorry to hear that you have lost your Dad. My condolences to your Mom too, she must be devastated. I believe he is in the next room watching. He sees the love in the fruits of your labor. Wishing you peace.

My most sincere condolences to you and your family on the loss of your dear father.

Losing a parent is one of those life milestones that we would just as soon do without. I'm sorry for your loss and hope that your family and your memories will be of comfort to you.

Don, please accept my sincere condolences on the loss of your father.  The bread baking kept you occupied and busy and I am sure your father enjoyed them in spirit with the rest of your family.

is a hard but inevitable milestone.  My mother, who taught me how to make bread, died at 93.  She is always with me in spirit.  Whenever i do a Yoga pose in which I look upward, I think of her and say "Hi Mom."

Probaby every time you bake bread and share it, you will find your father is with you.

Thanks for sharing with us.  You and your family are in my prayers.

I'm so sorry for your loss.  My father passed away suddenly age 67 from a massive heart attack--no warning.  I'm glad you had all those years to share and learn from him.

My condolences to you and your family. May you find comfort with one another at this time of loss.

i think what you did in remembrance of your father was fantastic.

my best friend is a buddhist from cambodia. she has taught me a lot about patience and forgiving. i'm a german/irish catholic. we need to learn a lot about forgiving at this point.

you made beautiful bread in remembrance of your father & enjoyed the experience with your family & friends.

my condolonces to you and your family. What a tribute to the staff of life (bread). It is somehow beautifull to be remembered this way.

I am very touched by all your messages of sympathy following the passing of my Father. Your caring expressions have been a great source of comfort and strength for myself and my family as we are trying to get our lives back to normal. Thank you all.