In my last post, I wrote about the classic Pane Casareccio di Genzano that I had made for the first time using the formulation in Daniel Leader's 'Local Breads' book. I was pleased with the result so this past weekend I decided to try the Whole Wheat version of the same bread.

For the Biga Naturale, I used my white flour liquid levain with KA Bread Flour. For the dough, I used 50% KA Bread Flour, 44% BRM White Whole Wheat Flour and 6% BRM Dark Rye Flour. This is a high hydration dough and by my calculation, the final dough was a whopping 80% although I was surprised at how malleable it was. I did not follow the intensive mix recommended by Leader but instead used a 30 minutes Autolyse followed by gentle kneading with a dough hook and room temperature fermentation with 4 sets of stretch and fold in the bowl and one final full stretch and fold on the bench.

I shaped and proofed in a lined banneton for 1 hour before baking at 450 degrees F with steam for 15 minutes and 20 minutes at 400 degrees F without steam on convection. 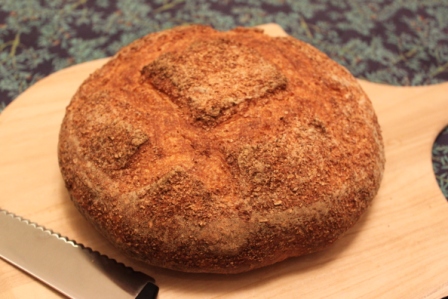 The loaf had good oven spring but not as spectacular as the white flour version. Because of the elevated hydration, the scoring cuts were not very pronounced.

The crust was a rich amber color and the top was coated with browned shavings of wheat bran. It was medium thick and had nice crunchiness. 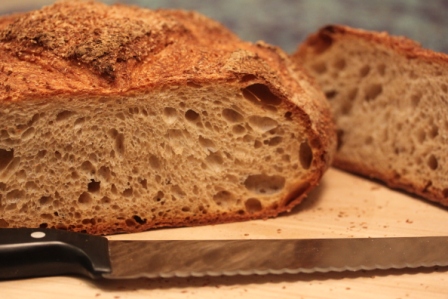 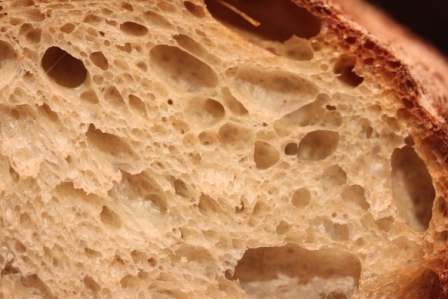 The crumb was cream color with translucent gelatinization and irregular air holes and was tender with just a touch of chewiness. The taste was bolder and more rustic than the white wheat version with a slight bitterness from the toasted bran. The crumb had less sweetness but more whole grain taste and just a slight hint of tanginess from the levain. All in all a very satisfying and comforting bread but not as elegant as its more refined version.

I would certainly love a cold lamb sandwich on your loaf.  Lovely scoring.  What's your main reason for not baking with convection?  How do you think it affects the oven-spring? I use it most of the time after the steaming but have to adjust the temperature or use regular baking if it's browning and baking to fast.  Gorgeous looking Boule!

Lamb sounds great but some EVOO would do in a pinch. I have learned by trial and error not to bake at the same temperature all the way through. I always start at high temperature with steam and then finish at a lower temperature without steam and on convection. I have done side by side comparison and the convection bake at the end dries out the crust and gives me that elusive thin crackly crust that we are all after.

I misread..my eyes saw 'without steam or convection' something like that.. ;) I need to eat more greens!
Sylvia

Fantastic bread, and so good to read positive comments about this recipes from this book.

I'm speaking as someone who has actually made very few of the recipes in his book, but who took great pleasure reading about some of the really special breads of Europe which Dan Leader uncovered.

Your bread looks excellent, as usual.   I hope to make it a summer project, as my copy of the book seems to be stuck in my cupboard at College.   I must remember to bring it home, and explore all he has to say about rye in Northern Europe, and those special Italian and French breads too.   I have made the Couronne; simple but lovely.

I take it this is a "small" boule, as per the previous post.

We tried the HB today; perfect!

I am with you, Leader's book is a fascinating read, a real travelogue through the best artisanal breadbaking areas of Europe.

I remember reading somewhere that the wheat fields in Europe usually has a small percentage of wild rye mixed in. I do not know if that is true or not but it could be one of the reasons the breads in Europe taste so good.

I did indeed downsized the recipe for the loaf so that the total dough weight was about 900 grams.

After seeing your post, I will have to gather the ingredients and try the HB recipe soon...

Do the steaming method, ok?

Your exacting standards will mean disappointment if you try to bake the HB.

If you need further advice at the time, then drop me an e-mail.

Not sure what you say about the rye intermingling.

BUT, sustainable biodiversity, and growing of traditional grain varieties is a really complex subject, and one of the most revelatory concepts I've been trying to get my head round since embarking on the MSc in Food Policy.   Think idustrialised bread wheat production versus traditional and indigenous crop varieties.   Big issue for our daily bread...and for sustainable life in the now and near future!

It is a great "travelogue" indeed!

I love the crumb shot - very nice color and the flavor sounds wonderful.  The profile reminds me of miche, and given the hydration level I guess that's not surprising.

and thanks. The shape for the WW loaf is certainly more like a miche although the white flour version was definitely a boule. I attribute this to the whole wheat addition which will never give you the same oven spring as white flour. That being said, the WW version has 2% more water, yet the dough never felt gloppy.

I like your modifications of the mixing technique. I'm convinced to give this one another shot soon.

I guess if you are after open crumb and uneven air holes, the intensive mix will not deliver. I like my bread this way so the gentle laid back method works for me.

The only drawback about this recipe is that I have wheat bran specks flying all over the kitchen!

That is lovely looking bread, Don!

Could you compare it to e.g. Hamelman's miches? Both seem to be high extraction, high hydration breads, baked large and bold.

And I'm 100% with you on the mixing aspect of the formula! Great stuff!

At first glance, the Hamelman and Leader formulations seem very similar but I think there are subtle differences that affect the texture and taste of the breads significantly. Leader's flour mix is 50WW/50BF while Hamelman's is 20WW/80AP which is reflected in the wheatier and nuttier flavor of the former. Leader uses a higher proportion of all  bread flour preferment plus additional yeast while Hamelman relies on all high extraction preferment for leavening. Consequently, I find that the oven spring is more dramatic with Leader's miche and the crumb is more tender and less chewy and definitely less tangy. The wheat bran topping in Leader's formula adds a slight toasty bitterness to the crumb that I kind of enjoy.

I have not made the Leader miche following his recipe to the letter (i.e. I added a touch of rye and used the modified mixing) so the comparison may be a litlle skewed.

It all makes great sense. I'm at work (and don't have my copy of "Bread" here unfortunately..."never leave home without it", right?), but doesn't Hamelman suggest a 85WW/15AP flour mix in his miche?

You are correct about the 85WW/15AP mix if you are talking about the Miche Pointe a Calliere recipe which Hamelman attributes to James MacGuire. I was comparing the Leader Miche to the Hamelman's Pain au Levain with Whole Wheat Flour. The Pointe a Calliere definitely has more whole wheat and more sourness flavor. I was able to get some Canadian T-80 high extraction flour so I will try to make it again to see if it tastes different than with the WW/AP mix.