In praise of white bread

In praise of white bread 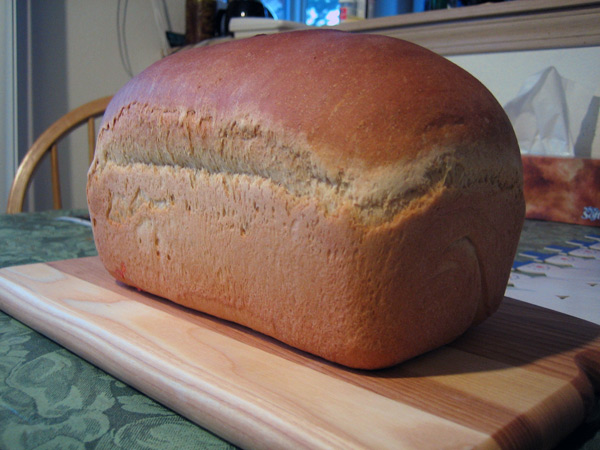 Nothing artisan or fancy about this, just good, simple home cooking. The kind of bread you eat right out of the oven.

I fudged the recipe. It was basically:

Mix in the standmixer for 10. Let rise covered for an hour, shape, place in a greased pan, cover, allow another hour to rise. Bake at 350 for roughly 45 minutes. 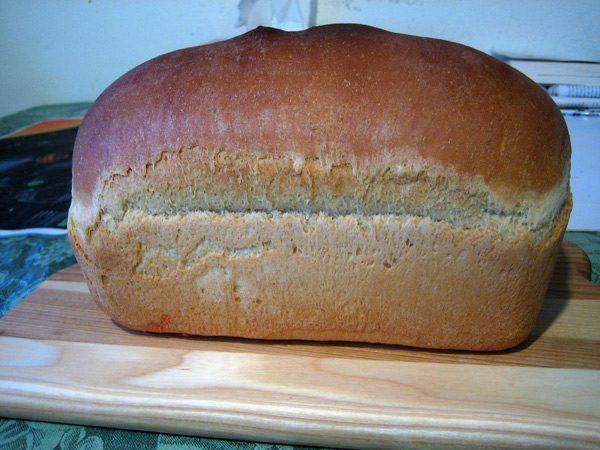 Floyd, that's a mighty handsome loaf of white bread...I bet it makes excellent toast. My English neighbor is a connoisseur of toast and she would love this, think I'll whip up a batch for her as I owe her a favor...thanks for the idea, hope I can get mine to poof as high as yours did.

Floyd, your bread looked so nice I doubled your recipe and made two loaves last night, one to give to my neighbor and one to keep for the family. I used whole-milk plain yogurt instead of milk, though (I was out of milk), and I also used a cup of whole wheat flour for 1/6 of the total flour. The smell was heavenly, and despite the fact that I am allergic to dairy and have not had anything with any form of dairy in it for months, I had to taste a bit of this loaf (hopefully my sinuses won't go crazy after this slight indulgence). It tasted as good as it smelled. Next time I'll try it with soy milk and soy spread rather than yogurt and real butter. My loaves did not explode nearly as high as yours, though - we're finally getting real winter weather here (7F !) and my house is rather cool at night even with the woodstove going, I just couldn't find a consistently warm enough spot to get a really good rise.

I also made your pain au raisin recipe the other day but used soy milk and soy spread in place of the milk and butter - they came out nice enough but I know they would taste significantly better with real milk and butter - the saffron buns I made last month with the same substitutions tasted much better, probably because of the nice saffron flavor.

After seeing the photo of the beautiful loaf attached to this post I broke down and started a poolish consisting of a cup of AP, half-cup of bread flour, a small pinch of yeast and 1.5 cups of water. My poolish sat out for 24 hours in a 60-70 degree kitchen. Other than the poolish the only way I deviated from the recipe was to add an extra tablespoon of butter and replace the milk with buttermilk.

I've made breads roughly with these same ingredients before however my loaves never seem to rise more than 1/2 inch above the edge of the Pyrex loaf pan in the proofing stage and even after oven spring and baking they don't really look much like a typical loaf of bread; a little too squat in shape.

Now it could be the 2 teaspoons of yeast in the recipe, or that plus the yeasty-beasties that mulitplied in the poolish, OR that I proofed the loaves covered with greased plastic cling film on top of my pre-heating oven but my loaves swelled and rose a full inch over the edge of the loaf pans. After baking they turned out roughly identical to Floyd's loaves.

I'm hoping it was a combination of one of the above variables coupled with the excellent knowledge gleaned from by a post by Demegrad pointing to some great videos on folding and shaping. I used this video's technique to shape my loaves.

The crust was crisp and crackled right out of the oven. There were some irregular holes but I chalk that up to the sheer amount of yeast in the loaves. After a day in a zip-top bag the crust softened and the flavors melded. The smell of the loaf is incredible and I agree with Floyd; the toast is to-die-for. I'll reply to this post with pictures tonight provided I'm a savvy enough computer tech to master image posting.

Floyd,
What size loaf pan do you use? Thanks.

Rena...I've made a similar spread for years...I use:

2 T. flax oil (put in with the grapeseed oil)

then fill to equal 1 c. with EV olive oil (so you have equal parts butter & oil)

Beat butter with wire whisk of mixer, until very soft...slowly add oil, then salt, mixing & beating well.  Pour into glass containers and refrigerate.  This is spreadable right out of the frig. - (it begins to melt at room temperature)...

I am new to baking bread so I'm totally confused as to what I did wrong. I thought I was following your recipe to a tee but found my dough to be dry and not pliable. It rose beautifully and I shaped it to fit the pan. The bread was not airy but dense. It tasted ok but I'm not happy with my results. Any suggestions? Thanks.

When you get a crater like that it usually is a sign that you need to create a tighter loaf (more surface tension on top). Rolling it and pinching it tight on the underside usually does it.

If it feels like your dough is too dry then add more liquid! There can be a lot of variation in the existing moisture content and absorbability of 3 cups all-purpose flour. So, yeah, if your dough feels super dry and tight, add a bit more milk or water.

Best of luck next time!

I appreciate your getting back to me on this matter. I hate tossing this loaf but I will try again soon and report back on my progress.

there are tons of uses for great tasting loaves that didn't end up looking so pretty!

Seriously - this sort of result is ideal for making in to bread-crumbs, or chopping and toasting in to croutons, or adding to meatloaf or bread pudding or a breakfast strata or baked french toast.  It also makes a great base for turkey stuffing, or as a breaded coating for meats or veggies.

Looking forward to seeing even better results on your next bake!

Thanks for your suggestions on what to do with efforts that don't make the grade. Perhaps I shouldn't have used the phrase "toss out" in my previous reply. I was brought up to respect all food and I will make good use of this poor guy ... one way or tother.

Here's a look at my second attempt. I like the consistency of this loaf and I don't have any 'cratering' which is a good thing. I added an additional 1/2-cup of warm milk to the mixing stage and that gave a real gluey feel to the dough. I tried not to over knead and while it rose rather nicely, it didn't rise the second time to where it was on the last loaf. I'm determined to get this recipe down and will not stop till I've done so. 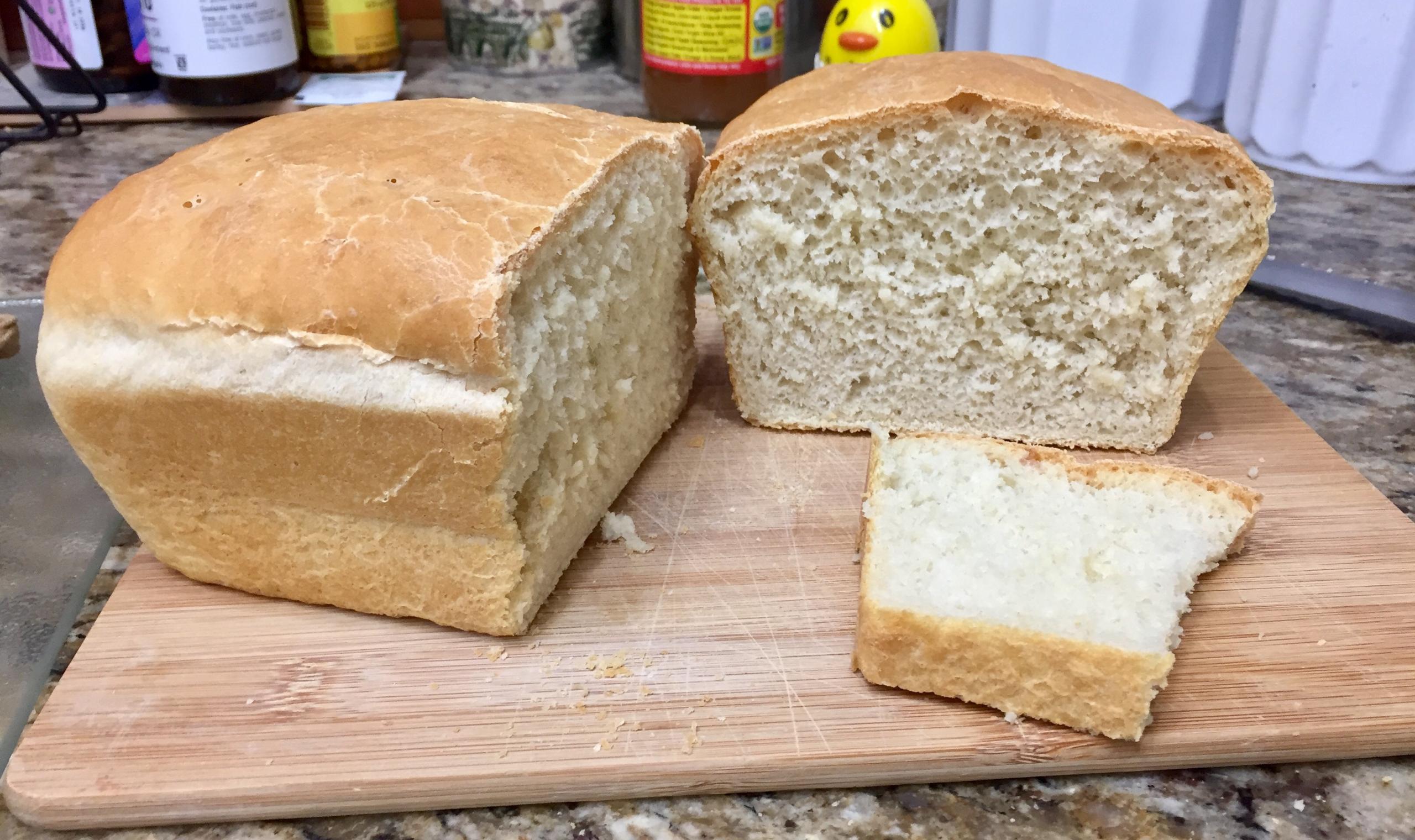 Not bad looking inside.

Are you hand kneading? You really can't overknead by hand. Even in a mixer you'd have to let it go 15 or 20 minutes before it really started to break down.

So... if you are hand kneading, I might try going a few minute more (or letting it rest for 10-15 minutes after kneading, then doing another minute or two of kneading/folding the dough to promote more even gluten development.

Thanks for the quick response. Indeed, I am hand kneading and it's good to know that I didn't over do it. I'm trying to educate myself from what I see on youtube and various blogs and they all warn against over kneading. I told myself that I wouldn't venture forth with any other bread baking recipes till I've conquered the basic white bread. As mother always said, "onwards and upwards".  Again, many thanks for your guidance.

Sorry about not posting this photo with my last response.