Being Easter, I decided that it was time to make hot cross buns. I'm no great photographer, but I was very pleased with how these came out. Wonderfully soft and spicy, just needed a wee bit more fruit.

What recipe did you use?

I have Delia's cook book and have made Delia's hot cross buns many times. However, although they were very nice, I have since found Dan Lepard's recipe, available elsewhere on this site,  which I think is far superior. Give it a try and compare, but don't make too many.  Hot cross buns are great but are very fattening.  A good thing Easter only comes around once a year!

Hi , I  would   also like to know what recipe you used.

I love making hot cross buns, too. But you didn't quite get the crosses right: they should be like a crucifix as they were originally inteneded to be. And the crosses are drawn with a pastry bag containing thick icing sugar paste. I just made some too but my pastry bag broke and I had to smear icing sugar over top like on cinnamon buns.

George (Author of What Recipse Don't Tell You) 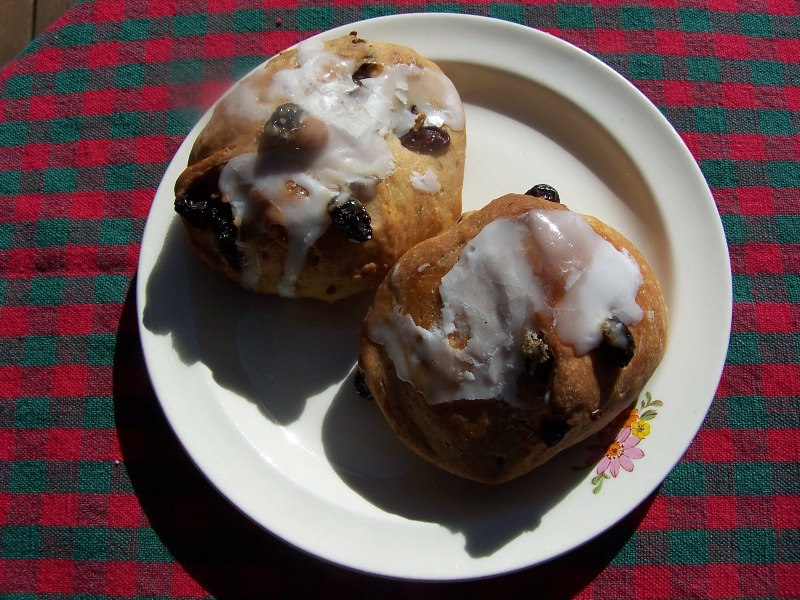 It's more a water flour, icing sugar recipe meant to be decorative vs flavourful.  its also very thick ... cheers.

Although they have been a Lenten and Good Friday tradition for centuries, Hot Cross Buns were not always associated with Christianity. Their origins lie in pagan traditions of ancient cultures, with the cross representing the four quarters of the moon. During early missionary efforts, the Christian church adopted the buns and re-interpreted the icing cross. In 1361, a monk named Father Thomas Rockcliffe began a tradition of giving Hot Cross Buns to the poor of St Albans on Good Friday.

In years that followed, many customs, traditions, superstitions, and claims of healing and protection from evil and were associated with the buns. In the 16th century, Roman Catholicism was banned in England, but the popularity of Hot Cross buns continued. Queen Elizabeth I passed a law banning the consumption of Hot Cross Buns except during festivals such as Easter, Christmas and funerals.

When I make mine, I use a variety of symbols on top to satisfy all: crosses for Christians, chalice for Unitarians, Mogen David for Jews and a design of my own for the atheists. Everyone at the party can choose their favorite. (We have no muslim friends.)

George (author of What Recipes Don't Tell You)