I have been following the fascinating recent posts and the excitement generated by the breads of Gerard Rubaud on TFL, so I decided to try a make a batch on this snowy weekend in Washington DC. I want to thank MC for introducing Gerard to us on her excellent blog and also Shiao-Ping for transcribing the formulation and testing the recipe with her gorgeous miches. Thanks also to David Snyder and Eric Hanner for their detailed step by step instructions and observations of their own experiment.

I used the same flour mix of 70% AP to 30% whole grain. I used the T55 AP flour from La Milanaise. For the whole grain mix, since I cannot grind my own, I used 30% Whole White (winter)Wheat, 30% Whole (Spring) Wheat, 30% Spelt and 10% Rye all from Bob's Red Mill. I mixed all the flours to use for both the levain build and final dough.

I followed the 3 step levain build and added 1% salt to each levain build. In his interview with MC, Gerard said that he increases the levain percentage in winter so I decided to use 40% instead of 30%.

I noticed in the video on MC's blog that Gerard ferments his dough in a wooden trough so I thought that the wood has to absorb some of the water from the dough. Also since I am using the T55 flour which is less absorbent than regular AP flour, I decided to lower the hydration to 75%.

Each step of my levain build took from 8 to 12 hours to ripen because of the cooler ambient temperature. I probably could have omitted the salt.

The lowering of hydration did not affect the character of the dough. Visually, its consistency during fermentation and shaping is very similar's to Gerard in the video.

The loaves had good oven spring. The crust is slightly paler that my usual high extraction bakes probably due to the spelt flour which I have never used before. The crumb is fairly open with a light tan color unlike the light color of Shiao-Ping's miche. The crust is quite crunchy and has blisters which I usually get with levain breads.

The smell after baking is reminiscent of toasted germs, slightly grassy more similar to a levain baguette than a high extraction bread. 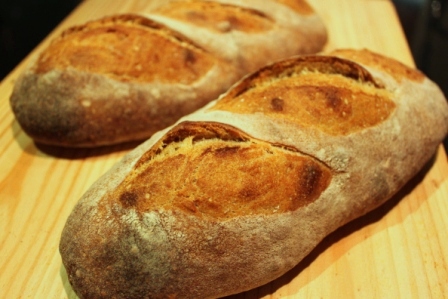 The crumb has a gelatinous character, has more weight and is quite chewy. It smells like a sweet honeyed pipe tobacco with a slight acidic touch. The taste is not as sweet and has a definite tang probably due to the long levain ripening and the higher percentage of levain. Overall is it a whole new flavor profile unlike any that I have had before. 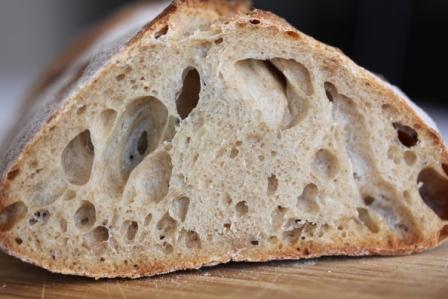 My wife and I just finished a light lunch of Vegetable Beef Soup with Bone Marrow and toasted slices of 3-grain Country Loaf inspired by Gerard Rubaud on this beautiful sunny Sunday in the aftermath of the Blizzard of 2010. Delicious!

I will try to make this bread using T80 high extraction flour instead of the AP/WW mix as a comparison. I will post the results.

You appreciated the amazing aroma, I see.

I suppose "everything matters," but I wonder how this flour mix would turn out in breads made with differing techniques.

Looking forward to hearing how your T80 compares.

When you think about it, all the formulations are not dissimilar but the variables such as flour type and mix, hydration, levain percentage etc. open up endless variations in flavor. I am anxious to introduce spelt in future bakes.

Because I have been baking a 10 pound batch sourdough baguettes with either 30% winter red whole wheat, or 20% rye for several months.  My method suits my busy lifestyle - I grind fresh flour - add to the levain which was made the day before.  I ferment the final dough 2-3 hours at room temperature, and bulk retard until the next morning.  Waking at 6am, I shape, proof and bake so the bread is ready by 9am.

Last week I followed your formula and method for the Gerard style (using fresh ground rye, sprouted spelt, and winter red wheat).  My loaves came out exactly like yours Dave.  I then tried the same percentages of the 3 grains on my daily recipe - (67% hydration).  Gerard's formula with my convenient method produced a more delicious bread - but if I want the airy crumb with large irregular holes - then I have to follow the long fold/stretch/proof in one day routine that you outlined.

My next step will be to increase hydration to see if I can achieve the same results.

I am still searching for a formula that will produce the same crumb - which I will not have to wake at 3am to produce.

I like the way you think through each phase of the build, evaluating and estimating due to the changes in flour and conditions. I can't enjoy the aroma from here but I certainly can appreciate the crumb and crust from your images. Nice job and a great write up.

I certainly benefited from you trailblazers. I try to do my best in describing fragrances and flavors. It is always hard because you know that it smells and taste like something that you have smelled and tasted before but cannot pinpoint exactly what. I belong to a wine tasting group so I get a lot of practice. People think that I am nuts sometimes because of some of the descriptions that I come up with!

Your snowstorm was certainly a gift since it gave you the time to create that lovely bread, Don.   A most beautiful crumb.

Looks like it is another day off for me tomorrow since everything will be shut down and they are predicting more snow early next week which means more playing with flours...

I see your wanting to try more of the spelt flour.  Me too!  I just did an addition of it to a country french loaf and really liked the flavor.

What percentage of spelt did you use and how would you describe the flavor? Did you find that it affected the handling of the dough in anyway?

I wanted a quick loaf because my bread supply was running low.  I happened to have a liquid levain ready so I made RLB Bread Bible recipe for French County Sourdough Boule.  I had also just purchased a fresh bag of spelt.  I replaced the rye in her formula with apx. 18% spelt flour.   The dough handled easily.  It had a lovely wheat flavor without any bitter taste a nice open crumb with a gel. shine.  In fact it was so tasty I couldn't stop eating it and felt bad I had consumed nearly half the loaf 'small boule'.  My main dissapointment was I think it was one of the smallest loaves I have ever made...I like large loaves.  I've only made her Pugliese loaf and hadn't tried any other of her recipes..I found it was also very small and always 3X the recipe.  I will definately be making this one again with the spelt flour.  This was my first attempt at this boule.  I did take photos for my reference files.  I haven't seen any photos of her recipe for this bread..so as far as it looks I don't have anything to compare it to..I would love to see anyone else's results with this recipe with or without spelt. 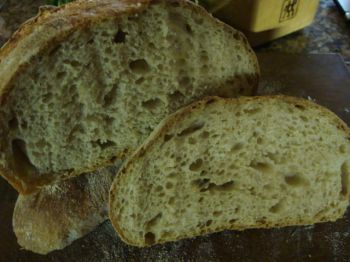