I baked Hamelman's Vermont Sourdough this morning, a recipe I've used many times with great results.  Both boules were baked this morning at the same time, side by side in the same oven.  The pretty little boule was baked in my Henri Emile clay cooker, the second on a stone under a stainless steel bowl.  I have never had the bowl method turn out like this before, and all other factors being equal, I'm at a loss to explain the difference in the two loaves.  Any thoughts? 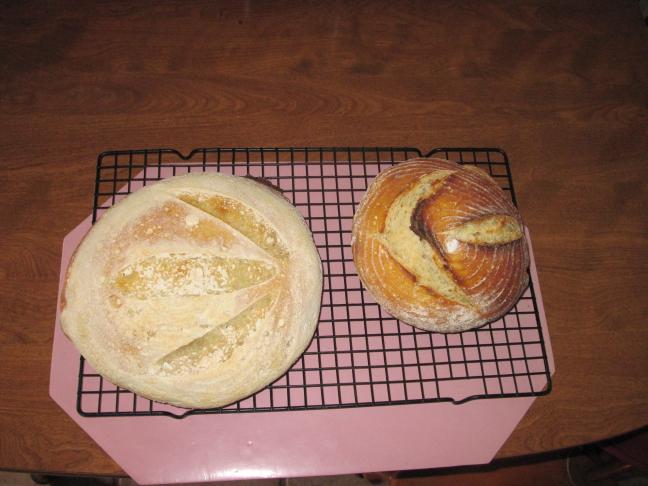 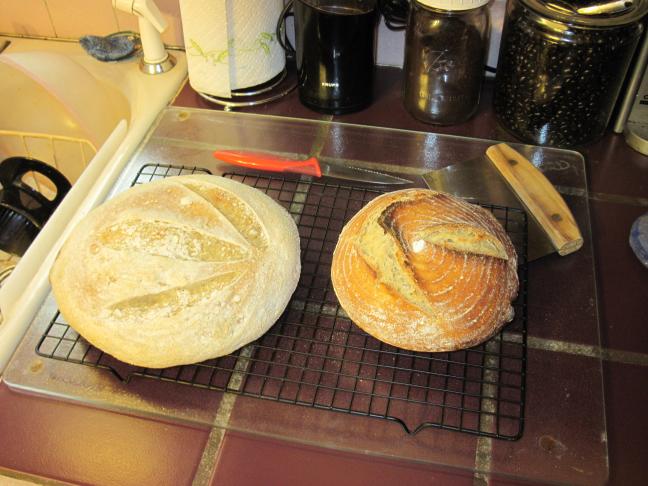 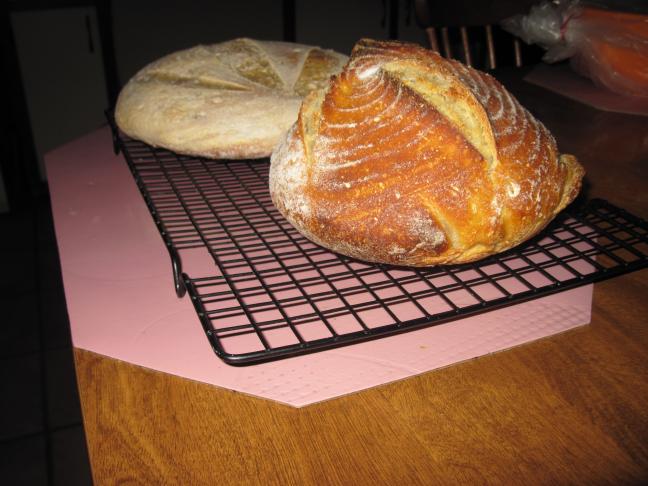 The bread baked under the bowl looks underbaked.  The color is pretty anemic and it looks as it if it was removed from the oven too soon.  The center looks sunken.

Have you previously baked one boule under a stainless bowl and one in your clay baker at the same time and gotten great results with both boules?

How long did you bake them?  Was the stone preheated?

Thanks for your comments.  I have actually baked two loaves side by side, one under a bowl and the other in the clay baker.  I remember the results as being fine, but I used the Suas sourdough on those occasions and not the Hamelman.  I baked each loaf for 40 minutes total, 20 minutes covered and 20 minutes uncovered.  The oven, stone and clay baker were all preheated to 500 degrees.  When I removed the covers, I reduced the heat to 365.

By the way, the taste was still fine, but the crumb was less open than normal.

I'm not familar with the Suas SD; I bake the Hamelman just about weekly but not under cover and at the 460F recommended temp.

Did you keep the oven at 500F when the bread was loaded and for 20 minutes thereafter?

I keep thinking of the difference in thermal mass:  the clay baker was hot when the bread was loaded. The bowl wasn't.

Both boules were from the same mix, so am guessing the difference in oven spring has to be attributed to the covers.  I also think the reduction to 365F may have had an effect on the bowled boule.  I've baked Susan of San Diego's sourdough under a bowl and it's never browned within the first 20 minutes; the caramelization takes place after the bowl is removed (baked at 450F).

Did you happen to check the internal temps of the boules?  Am curious if they were the same.

Interesting experiment, even though you didn't intend it to be an experiment!

Perhaps some of our engineers versed in the dynamics of thermal mass will share their thoughts.

BTW, they both are very pretty boules.

Your explanation makes sense about the difference in temperature.  When I'm baking only one loaf at a time (which I usually do) I don't seem to have the problem of browning.  Like yours, my breads only brown after I take off the bowl covering. As for thermal mass, I'm guessing the thick baking stone only compounded the problem.

The reason I heat the oven to 500 is that I want to get that nice brown crust, like the smaller boule got. I didn't check the internal temperature of the breads, but the crumb wasn't gummy.  Even though the color was pale, the bread didn't appear to be underbaked.

I think from now on I'll stick to baking one loaf at a time.

Thanks for the suggestions.

Day 5 of my starter...what 's now?
Florida starter
Hobart n50 used vs new global sp5
How to convert a yeast recipe to a Poolish ?
borodinsky first try - in zojirushi
END_OF_DOCUMENT_TOKEN_TO_BE_REPLACED