I wanted to make a lean yeast bread with some of the wonderful stoneground cornmeal from Ridgecut Gristmills that I posted about here. I decided on baguettes, since I hadn't used the fancy perforated pan that I bought from the King Arthur store in a while.

I loosely followed Reinhart's recipe for Pane Sicialiano, which he says takes 3 days, but I was able to compress it into 2. You start with a pâte fermentée, which is really just a lump of French bread dough. I used 1 1/2 cups of stoneground cornmeal and poured boiling water over it and let it sit overnight. (I don't really know if this did anything. I didn't introduce any yeast or malt for enzymes. Thoughts?)

Added about 1.5 c of bread flour, 1.5 c. semolina, 1 T. olive oil, 1 t. honey, and 1/2 t. instant yeast, and enough water to make a fairly slack dough. Kneaded a bit, let it rise a couple times, shaped, put it in the fridge for about 6 hours, took it out, let it warm and proof about 2.5 hours, then baked at 450 in a steamy oven. I rolled one of the loaves in cornmeal after shaping, to see if I'd like the crunch on the outside (yup, it's nice).

These were a bit of a departure for me, as I rarely bake with so much white flour, but I wanted the corn flavor to really shine through. And did it! Wow, a lot of corniness going on here. I think the long, slow fermentation also gives these extra flavor. Slightly sweet, a bit nutty even, with a creamy mouthfeel punctuated by firm nubbins of corn. At first bite, it reminds of a normal pan cornbread, but with a more satisfying chewiness.

I'd mark it as a successful experiment. Highly recommended if you like corn flavor. (The rest of the dough will be pizza tonight!) 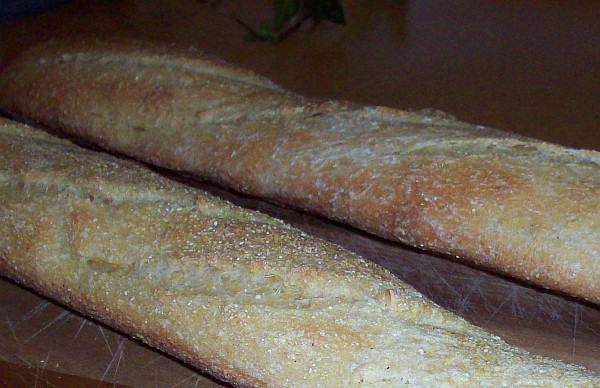 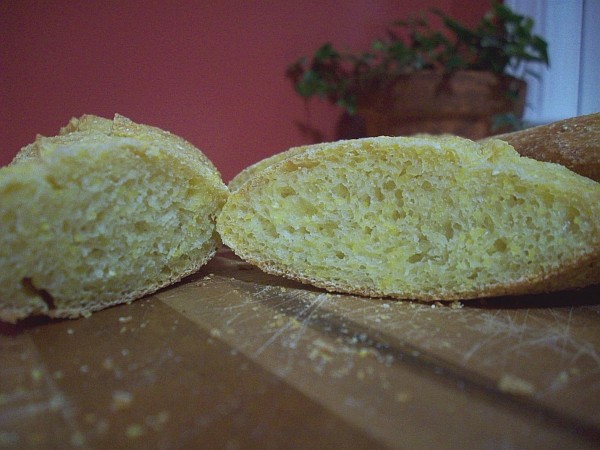 You asked about scalding the cornmeal and letting it soak over-night.

Scalding swells and may burst the starch granules.  Thus the starch is more open to amylase activity when enzyme is introduced.  Scalding denatures the enzymes.  You could have added some diastatic malt when the temp dropped to about 155°, and a lot of the starch would have been converted to sugar while the mush was still warm (a mash).  Without enzyme, the overnight soak of the scalded cornmeal did nothing.  The refined flours you added the next day had some amylase, but the amount, temp, and time was probably not enough to accomplish a whole lot of starch conversion.

Scalding the meal increases the hydration of the dough and the final bread.  Since the scalded meal is also partially cooked, the bread should have a creamier texture (porridge bread).

I've yet to find expert written guidance on when, and when not, to scald cornmeal.

Since you let the mush sit overnight, I'm surprised you didn't get clumps.  That's a way to get yellow marbles in the bread.

Many yeasted breads that call for cornmeal include a step for scalding or boiling the cornmeal.  Anadama, broa and war bread are three that come to mind.  I don't recall any that recommend an overnight soak along with the scalding/boiling.  I've seen others that do call for an overnight soaking, but they typically work with cool or room temperature water.

Your bread looks lovely.  It sounds like something you will want to repeat.

Cornbreads are a perfect match for my chicken okra soup...this would have went perfect with yesterdays dinner.

And delicate moist crumb. Nice choice in the mix of flours, the semolina  I have read, holds onto moisture after the bake. Your process seams to work well, and expert handling, I am sure, helped. I'll bet it was really delicious.  Ray

Being a novice to home bread baking I find the above comments interesting and informative. I use semolina/cornmeal in my white bread to increase the fibre content.

I have a lapband for weight loss and heavy rye or multigrain breads are now too heavy for my stomach. However a small amount of ciabatta or small pieces a baguette can be nice and very filling. For the extra fibre I just add cornmeal but without the soaking or scalding. I adjust my water accordingly not by measure but by eye sight according to the recipe description. I still get a nice open crumb that is gold in colour and I do not mind the grit texture.

My point is that I am now going to try a baking session using presoaked cornmeal.

I wonder how cornmeal when soaked  in a poolish starter would go. Obviously more water would be called for. Any ideas out there?

So, are you saying that instead of the pate fermente, you used the "cornmeal soaker"?

What I am asking (and I will experiment with) is "when making any starter for a Bagette or Ciabatta" how would the starter go if you placed some cornmeal in with your flour, water and yeast. Would the yeast feed and react to the sugars in the dry cornmeal as it does in a rye flour starter.? Will it help or hinder the process of a starter? Matt sharing his experinces has just opened my mind to a new challenge and I thought maybe somebody may know!!!

I'm just thinking out loud that while the starter is ferminting over night that it can be soaking the cornmeal at the same time with it. I know scalding the C/meal with a starter at this point would kill the yeast. To me I think some extra water would be required as cornmeal is a thirsty food.

I'm new to all this information I'm finding on TFL. Till six months ago I only ever baked in a bread baking machine for sandwiches and toast and still buying my  bagettes and other lovely bread styles. Then I googled bread making and found this site. My bread machine is now used for kneading only due to time. The rest is my job. I don't think I will ever get away from the Artisan bread methods again. So if my question about cornmeal seems strange please forgive me as I am still learning. My remarks only apply to French,Italian and sandwich loaf styles as I've not tried a sourdough as yet. The starter concerns me a bit as I have not had success with one yet.............Still Learning..............Pete

Sorry for the misunderstanding. My question was for the O.P.(original poster).

Yup, I added the pre-ferment and the soaker, and the ingredients I described to a big bowl and stirred them up. I did chop the pre-ferment into about 10 or 15 pieces to make it easier to combine. Reinhart calls this the "epoxy method" in his whole grains book.

I also added about 3/4 tsp. salt that I forgot to list. (I often use a bit less salt than recipes call for as high blood pressure runs in my family, and also I find many loaves over-salted, esp. commercial French bread.)

I frequently just throw together a mix of flours in a bowl, a pinch of salt, my starter, and enough water to get the right feel. I'm an engineer by day, so it's good to cut loose after hours and let measurement be damned! Of course this makes it hard to repeat a particularly good batch, and hard to diagnose a bad one...