Has anyone made Peter Reinhart's soft cheese bread from Artisan Breads Every Day?  How'd it come out?  Any pics??  Thanks!

I made PR's Soft Cheese Bread at least 3 times. The first time was as a few standing loaf. The remaining times were as Kranz-style loaves. I would say that it is a dangerously delicious bread. One time I also added red pepper flakes. 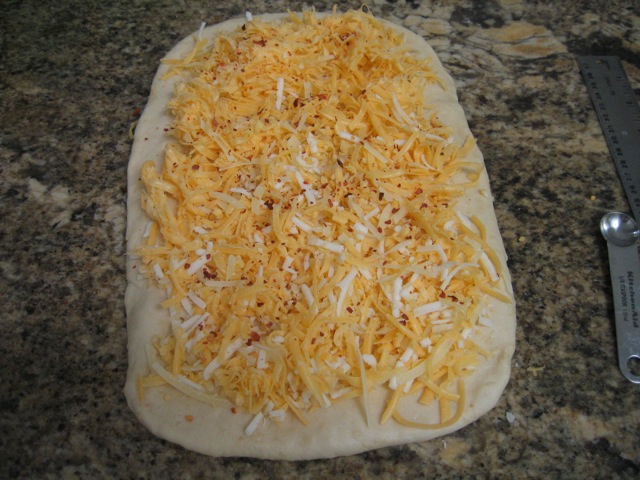 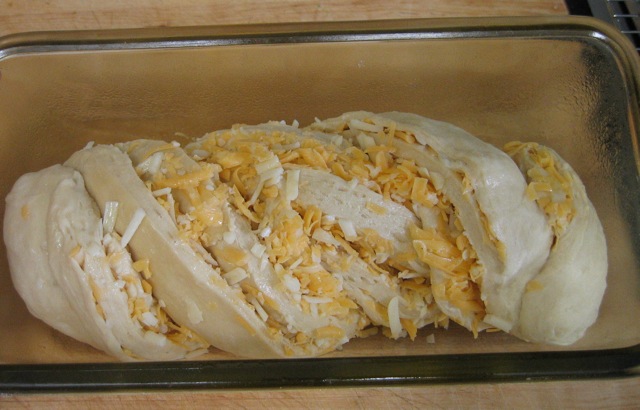 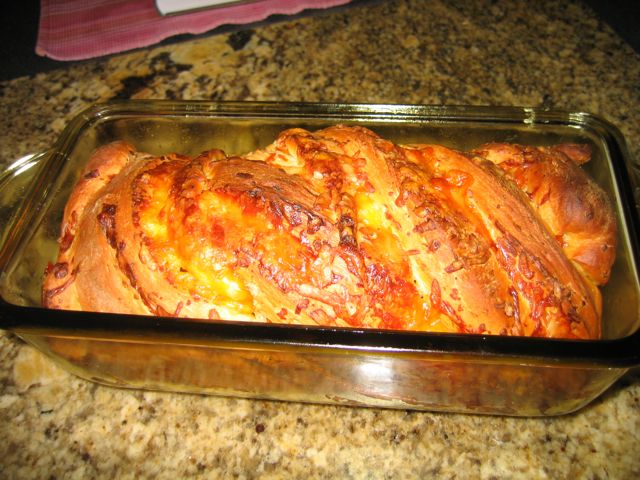 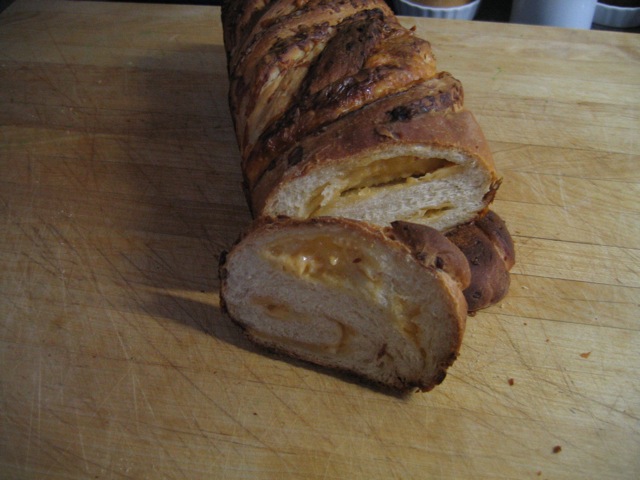 I have more pictures posted on my gallery site:

Very nice Pamela!  Thanks so much for sharing.  I am thinking about making them, but as individual rolls.  Did you add chives or onions to yours?

Is the "twist" mentioned in the book?  It works out lovely in your pictures!  Any tips?

The Twist (AKA Kranz-style) isn't mentioned in connection with this bread but is demonstrated on p. 159 for the Babka. I prefer the kranz-style for the cheese bread. I baked the loaf in a 10 x 4 inch glass bread pan. I felt that the loaf held together better in this shape. It is a bit messy and you think that it won't work but in the end everything works out fine.

I'd be happy to message you the instructions for doin the "Krantz" if you'd like.

I would appreciate that.  Thanks,

Please, post the instructions here - I'd also like to know how to do it, and I'm sure there will be many others who are interested in learning how to do this.

Roll the dough into a rectangle and spread the cheese, etc. on top.

Roll the rectangle up from the long side--try to roll it as tight as possible, stretching the dough as you go along. You will now have one long roll.

Cut the roll in half length-wise. You will now have two long strips oozing with cheese. Don't worry about the oozing; it's part of the charm of the finished loaf.

Place one strip on top of the other to form an "X".

Braid the two together starting from the middle, working out to each end. Braiding means just crossing one strip over the other and then reversing until you reach the end.

Squish together slightly and place in a loaf pan.

Thank you Pamela. I'm going to try this soon.

I just made this exact recipe from PR today. Instead of using a jelly roll method, I did roll out the dough into a rectangle to which I added the shredded cheese and used a letter fold method to try for a regular loaf. I used some Irish Cheddar that I shredded for my cheese.

There were big holes in the finished bread, the top separated or pulled away, it was not a loaf that could be cut easily. Now I know PR does talk about using diced or cubed cheese to help alleviate the separation problem. Although in reading posts here, it sounds as though the cheese cubes melt, with cheese running to the bottom leaving a large hole.

I did dock the loaf on top with a toothpick as suggested, and I did have some extra expansion along the upper side of the loaf. The second loaf, before putting it into the oven, I docked it with my Taylor pocket thermometer, which produced a larger hole. This loaf didn't have the expansion problem and appears like a normal loaf. I haven't cut into that loaf to see if there was a dough separation.

I believe someone mentioned using the KA recipe, which I believe KA speaks about using cheese powder. This wouldn't work for me as I do like cheese, and I'm always buying the better imported cheeses.

So I'm kind of stumped at the moment, as to how to incorporate good cheese into bread dough without experiencing the large pockets and separations in the final result.

On a different note, PR's recipe for his wild rice and onion is a big winner, with no problems to contend with! Makes the house smell heavenly when baking and again toasting in the morning.

I didn't add chives or onions but either of those would be a great addition. I'd use dried onions rather than fresh.

It's a very easy bread to make that also keeps well, that is if you don't eat it all up on the first day.

Make sure to insert a skewer to remove any air pockets--I think I always forgot that step.

I made this with brie and sharp cheddar, and bottle conditioned beer.  Mine was in freestanding form, and included fresh onions.  The onions were good, but a little overpowering, I might caramelize them next time so they don't bleed their juices into the dough quite so much.

I'm partial to the hearth cheese bread (below), which I've made a couple times with fontina and asiago.  This version stands up a bit better to the fresh onions in my opinion.  This has been one of my alltime favorite loaves, I think we cooked up a batch of spicy chili and ate most of the loaf that night. 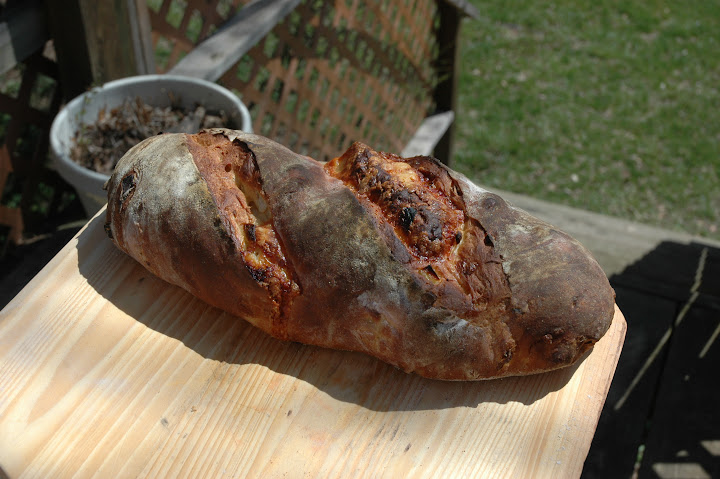 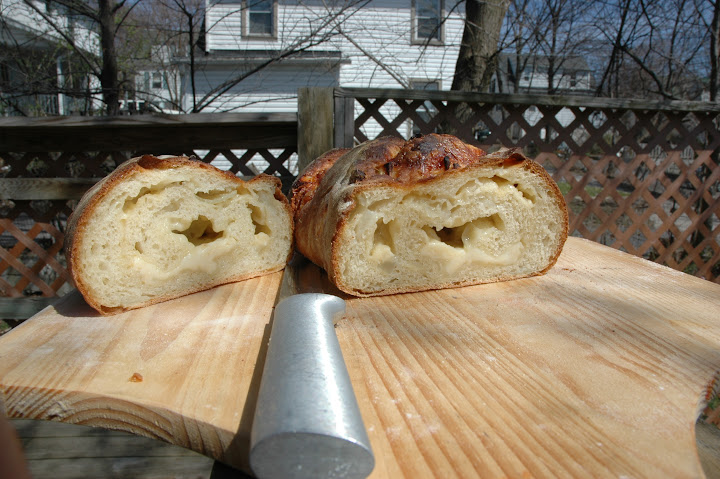 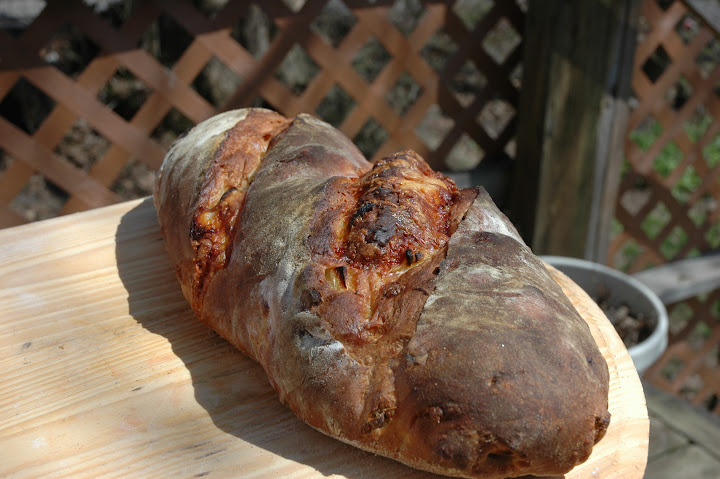 Your loaves look delicious, Logan. I really prefer using the dehydrated onions. Norm (NBI Computers) has a whole explanation somewhere of why he thinks re-hydrating dehydrated onions gives the most authentic taste, and I have to agree.

I tried the cheese bread with fresh onions first, but thought the onions got stronger on the second day. The next time I made it with the dehydrated and I liked the flavor better.

I'll have to try them dehydrated some time.  I just don't normally keep them around so I don't even think of using them.  My other idea for this loaf was to add a healthy dose of roasted garlic along with the cheese.  Maybe next time!

I made it once when I was a tester.  I made two loaves and used purple onions in them.  They turned green after baking, but were tasty nonetheless. 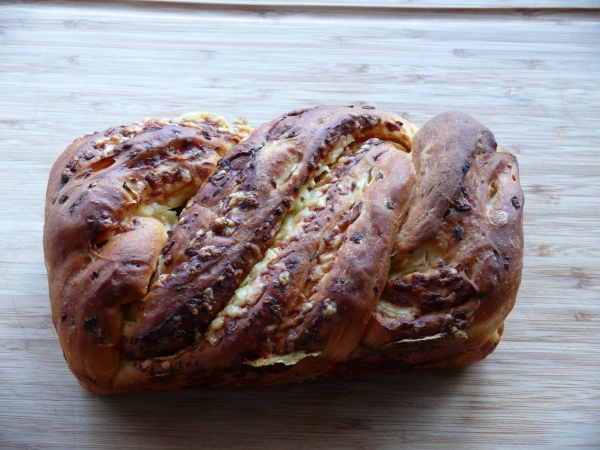 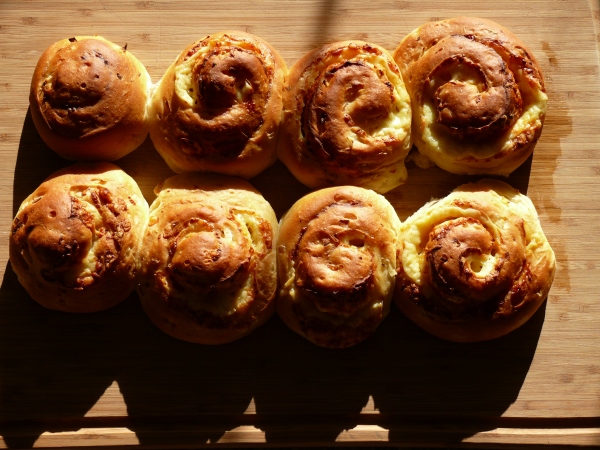 This bread is sinful!!! I wish I could make this more often, but the consequences to my weight and cholesterol keep me sane!

Your rolls look terrific and are probably even more dangerous than loaves.

After you've rolled the goodies up in a log "ala cinnamon buns" take a knife and slice down the middle lengthwise. This will give you 2 half tubes. Lay one half tube cut side up and lay the other half cutside up across the first to form an X. Twist each end from the middle out. Make sense?

Pamela, What a lovely shape for this loaf.  Thanks for the directions.