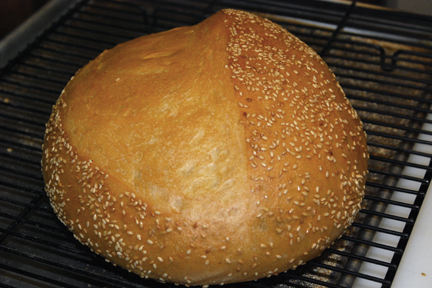 The dough didn't spring all that much in the oven. 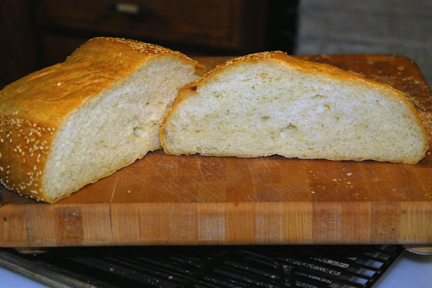 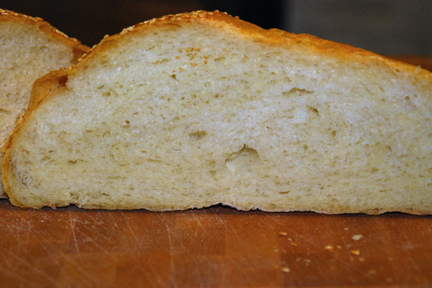 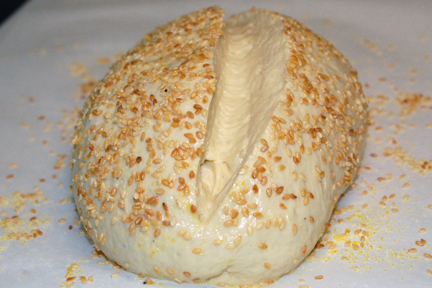 Slashed deeply and ready to proof 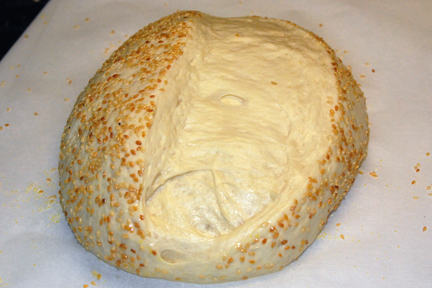 MommaT asked about a recipe for a Greek Bread that she had just had while in the Mediterranean on vacation. A common bread sold everywhere and wonderful to the nose and mouth senses. I suspect the view of the beautiful Greek villages with their white stucco buildings and red tile roofs, not to mention the sea air and fine wine might have an impact on the experience of eating a piece of artisan bread dipped in the most fragrant  Greek Olive oil. Ahhh, it takes me back.  So---

When DSnyder suggested a possible recipe after connfering with his Greek DIL, well I hopped right on it. I converted the recipe to weights for the most part, at least where it counts. I used 135g per cup for the flour weight and KA AP flour. My hydration came in at 73% counting the milk and oil as liquids.

I thought the dough to be a bit firm but the recipe does call it a stiff dough. I mixed it as per  suggested but I let it rest for 20 minutes and then folded and kneaded a bit. It was starting to become smooth but not fully delevoped when I shaped it into a round and covered it. About an hour passed annd the dough had doubled nicely and felt like a puff ball. I shaped it into a tight oval, brushed an egg wash over the top and sprinkled a generous topping of toasted sesame seeds over the loaf. I don't usually slash the loaf prior to proofing but that's what was called for so I made a deep slash down the top center as you can see. I covered the loaf with plastic, dusted the plastic with spray oil and flipped the plastic wrap over so as to avoid a mess after proofing.

I had pre heated the oven to 400F and heated a 1/2 C of water for steam. The bread was loaded, in with the water and after 15 minutes lowered the heat to 350F for another 15 minutes. Actually I didn't quite go to the full 30 minutes baking time. I thought I was done enough for the first try at 27 minutes. The bread feels very light and is soft enough on the crust it is just a little hard to slice. Perhaps just just a little more oven time to dry it out.

The aroma is wonderful. Toasting the sesame seeds is always worth while. My daughter approves, saying "this is really good" , that is a pretty tall hurdle. She is a tough critic.

I don't know if this looks or tastes like what MommaT was talking about or even what David's daughter in law Stephanie intended. Perhaps she will see this and comment. Thank you Stephanie and David for your interest in creating this bread. Please let me know what you think.

Here is my contribution to the recipe.

Method as called for in Davids post here
Mix, autolyse, knead and ferment till double. Punch down, shape, slash and wash with egg wash, seeds and proof for 45-60 minutes.
Bake at 400 for 15 minutes, reduce temp to 350 for and additional 15 mins.,steam as normal

but Eric, why did you slash it before proofing it?  I thought that gets done right before putting in the oven?

It looks like it spread open a lot more, because of it, although you can't deny, it looks pretty.

Nice looking loaf, Eric. I was lucky enough to go to Greece once and remember having such a bread. I love the sesame seeds on top. 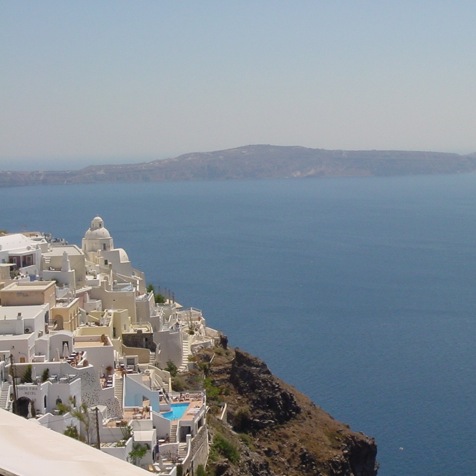 Eric, I was wondering what you thought the cause is of the white streaks through the golden crumb. I see you only used one type of flour. Do you think it's the olive oil? I ask because that occasionally happens in my loaves.

Still, very nice and like the slash, something different.

Thanks for your comments. I think you have the correct analysis about the oil. The way it gets incorporated at the beginning I think is hard to get evenly distributed in the dough. It is my first try with this and I did it mostly as per the recipe. After I hear from Davids DIL I'll make an adjustment.

I've sent Stephanie the link to this entry.

It looks good to me.

I hope she will be brutally honest in her evaluation. We are all trying to learn here.

The sesame seeds are so important to the flavor with this. I think it would be better  completely covered and not slashed. Maybe an aromatic while grain flour addition to make it more dense. Amaranth maybe?

Yes, the recipe called for that sequence. It's hard to tell by the picture due to the way I cropped the image. The before and after proof shots look about the same size but it actually did about double in volume. I think maybe I would go back to slashing just before baking and not proof quite as long.

This is such a lovely and tasty looking bread.  I would like to know if your mixed all the dry ingredients and then added all the liquid when you made this bread.

The recipe called for mixing the water, milk, oil and yeast together first. Then you add 1 cup of flour and finally the balance of flour. After seeing how streaky the crumb was, I wouldn't do it that way again.

Hi Eric, I have the best results when mixing usually by putting my dry ingredients in the mixing bowl making a well and then pouring in the wet and mixing.

Sylvia, that's what I usually do too.  I was trying to follow the procedure the first time just to see what happens. I have learned to be open minded about these things, always expecting to learn something new. But, I'm famous for "doctoring" things to suit my taste, around my family.

You beat me to it!  I have my recipe out on the counter this morning...ha.  This loaf looks great!  I wish I had some for breakfast!!

Thanks to the comments from the DIL, and some other random (frantic) web perusing, I came up with two recipes that looked like they might be 'it'.

This recipe was one of them....and yours looks fantastic!  The loaves we ate (last week?  waaaah.) were oval shaped and I don't remember any slashing on the top.  (I am a bit perplexed, I must say, at these recipes that instruct to slash before proofing.  Perhaps that flattened out your loaf a bit.).

The inside of the loaves we ate were very yellow, with no perceptible taste of egg.  With that said, the (farm-fresh) eggs in this little village had yolks that not only stood up nearly as high as the brim of the skillet, but were a deep orange color...yummmmm!

On that note, I decided to try two recipes:

1)the one you've made

2) one that includes semolina/durum flour

Will report back.  Who knows!  Perhaps even with pictures!

I'm anxious to hear how this recipe goes for you. I saw that list of ingredients and wondered about the bread improver. I don't have that and honestly I would have to mail order it from King Arthur I suppose. I don't really know much about that product.

I like the idea of the semolina added. I think it will go well with the sesame. I toast my sesame seeds just a little. It really helps the aroma. Just a little until you start to see a color change.

You are the one with the most recent memory of this bread so we are counting on you for a good report!

Added edit: I noticed this note at the bottom. My bread from the other recipe was NOT a heavy bread in any way. More like a light airy crumb.??

This Greek country bread is a textured, heavy bread.

I made the bread Eric made yesterday.  I egg-washed, seeded and slashed after proofing instead of before.  The results looked pretty much the same, with perhaps a little less opening at the slash.

The crumb was very soft, light and airy. The crust was not thick.  It was a tasty bread, and my 3 y.o. proclaimed "best peanut butter and jelly ever", but it wasn't what we had.  The bread we had looked similar, but had a little more heft and was a little chewier.  It was also distinctively yellow inside, which I'm quite convinced is due to the flour.  I'm hoping the semolina flour will do the trick with this.

As for the bread improver, on the KA website it shows a rye bread improver with the kind of ingredients listed by the earlier poster.  HOWEVER, they also listed a whole wheat bread improver that was very simply vital wheat gluten, soya flour, inactive yeast (?) and ascorbic acid.  I am loathe to buy yet another specialty item, so am going to use vital wheat gluten and see what happens.  I'm guessing the semolina flour needs a bit of a boost and hope that does the trick.

More postings on the second loaf over the weekend.   You know, someday I really aughtta learn how to post pics!  ha.

Have a super weekend everyone!