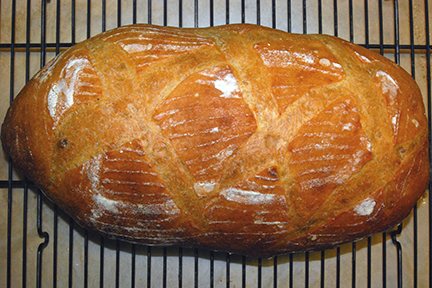 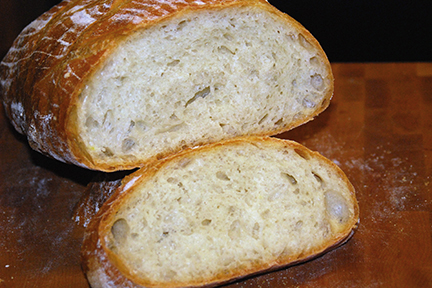 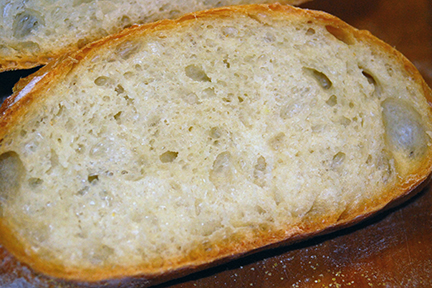 I was interested in this one day bread that is reported to be a flavorful and beautiful direct ferment dough. I followed Shiao-Ping's formula precisely, even to the point of obtaining a bag of King Arthur flour. I figured if she can spring for it in Brisbane, I'll dig deep here where it's only 3 times the cost of my usual bread flour.

I was pleasantly surprised at how nice the dough felt as it proceeded through the folding stages. It was a thing of beauty by the last stage. All of the times and temps were right on. I planned for a 72F dough temp and it stayed there all through the ferment. At 4-1/2 hours I shaped and let it rest on the counter as advised. I wanted to skip the banneton, the gluten was well developed and I think it would have stayed in shape for 45 minutes. Surprising for an 80% hydration dough.

Anyway I watched the proofing progress as advised and at 40 minutes it was right according to my floured digit. After a sloppy pineapple slash into the oven it went. Yes, a scant 1/4 Cup of water in the steam pan.

I have never baked a white flour loaf for an hour and was hoping it would look right. I read Shiao-Ping's note about how the author suggested up to 70 minutes but I wasn't that brave. 60 minutes of oven time, the last 50 being at 350F was my plan.

You can see the crust is nicely browned and not overly thick all around. I got a nice oven spring and the shape is about what I would expect. The crumb is reasonably open and has a nice chew.

For a short 4.5 hours of floor time this is a nice bread. It isn't the best direct bread I have eaten but it's very good considering the time it took to make it. I did think the crust was more chewy than crispy. Perhaps the additional 10 minutes in the oven would fix that.

I plan to make this again or rather the Sourdough/yeast  version tomorrow. I'll probably add a little rye in the flour mix just to try to maximize the flavors. If the dough feels as good as it did today, I'll do a free style bake and proof in a couch cloth. I might split the dough and make a baguette also.

We are going to a dinner party Sunday with some friends who like to think they are well traveled. I want to take some baguettes that will make them beg for the source and then tease them with the name of a fictitious new bakery. It will drive them nuts for a while trying to find it. Lol I was planning on doing the Anis method but this is in the running.

So that's it. Thank you Shaio-Ping for your inspiration to try this formula and method.

As I posted somewhere else, I worked up two batches and made them into baguettes and put them into the fridge to bake tomorrow morning. It's just the way my schedule went today. The dough was a dream to work with, so nice and silky smooth. I hope they work for me as well as your loaf worked for you. Your bread looks great.

Good luck with your ruse.

Very nice loaf and crumb Eric. I'm sure friends will buy your story about about the new bakery if you bring baguettes.

Gorgeous loaf, Eric!  Wonderful pictures and write-up too.  I love the shape, crumb and crust you got on your loaf.  I  love the creamy yellow crumb on this bread.  Your pineapple slash looks great...I had never done one before and just went at it..after first three slashes...I was a little lost where the next three went :/  I will have to pay more attention to my baking temp. and timeing.  I think your baguettes will be a big hit!  I'm looking forward to seeing future posts!

WOW!! then again, YOU are one of the bread masters here! Very nice.

I'm planning on making one or more of these breads this weekend too.

Weavershouse, Pamela, Sylvia, Betty and David, thank you for your words of encouragement. My success at this is just a matter of being able to follow directions. Shaio-Ping's most excellent post left me scant few places to go astray.

It kills me to say it but I'm liking this KA-AP flour. I'll have to try again using my standard GM Better for Bread at 1/3 the cost.

I'll post the results of my off the reservation attempt today.

Lately the KAF here is running a couple of dollars less than the GMBB at our local Albertson's!  I'm looking forward to see what the results are with the GMBB..I have some in cupboard!

... to learn about things ... it must be the distance across the Pacific Ocean!

I've just seen your post.  Great looking loaf!  Since I've started making sourdough I have completely lost interest in yeasted bread ... until this one.  For a direct dough yeasted bread, this one is pretty OK, isn't it.

I am curious to know what other direct breads you've eaten that you like better.  Is it different flour composition, or is it different fermenting method?