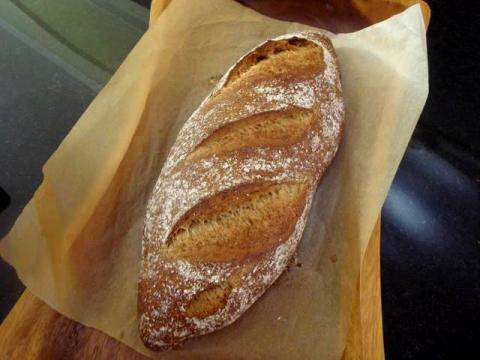 My son asked if I could make hot cross buns for Easter three months ago, so I Googled the recipe and a whole new world opened up to me.  Up until then, I had hardly used internet recipes, and guess what - the first hot cross bun recipe that I came across was Dan Lepard's recipe and it came with this excerpt from Dan's website:

"Good bread comes from an understanding of its nature... a good baker recognizes that the doughs he makes are living things with individual identities, that they ultimately create themselves. The baker's skill is to encourage natural developments ...."

These few words enlightened me and I have since moved away from pastries and have come to a completely new frontier - sourdough! I began researching sourdough day and night for a period of three months non-stop. Before Easter, I had never heard of the word "sourdough."  I had made pastries for years and yeasted breads using bread machine every now and then, but strangely I had never heard of "sourdough" up until that point.

I was trying to explain to my sisters back in Taiwan about this curious dough.  I had to translate the word into Mandarin to make myself understood. I said it is a "suan-mientuan," meaning "sour-dough" in Mandarin but I was not happy with the translation. Soon after that, I started to use "tian-ren-fa-hsiao-mientuan," meaning "naturally-leavened dough" to describe it and I am much happier with this translation.

I had leftover molasses mixed in water from making the last Horst Bandel's Black Pumpernickel.  I love the rich taste and aroma of molasses and I wonder what it would be like to put it in sourdough.  Here I go the fanciful side of me is working.

This Molasses & Light Rye Crusty Sourdough is my tribute to Dan Lepard. I thank him for opening up a brave new world of sourdough to me. 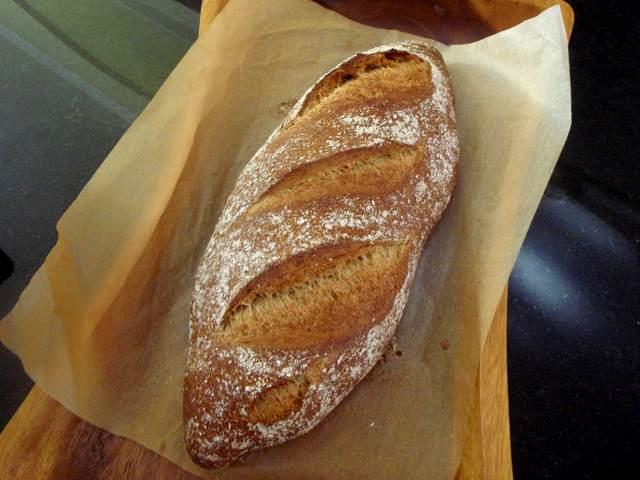 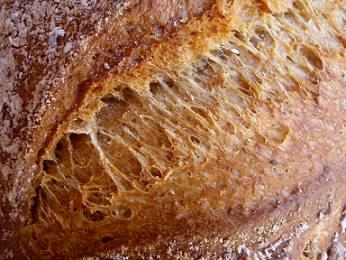 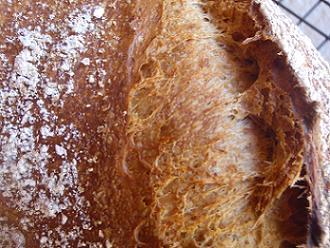 The dough was bulk fermented for 4 hours and during that time it received 3 folds. Shaped, then into the fridge for cold retardation for 10 hours. Proofed at room temp for 2 & 1/2 hours this morning before baking.

I have found something quite useful for new sourdough baker like myself and that is to NOT over-steam the oven. With too much steam, the scores would seal up quickly in the oven and would not give nice grigne.

We had this sourdough for brunch today and it was really lovely. My son said he could smell a pleasant sourness.  He had a slice with peanut paste (how typical for a growing boy). My daughter had it with grilled capsicum in an open sandwich; my husband had his with a thick layer of butter, and I had it as is.  AND, Polly our dog got a slice too! 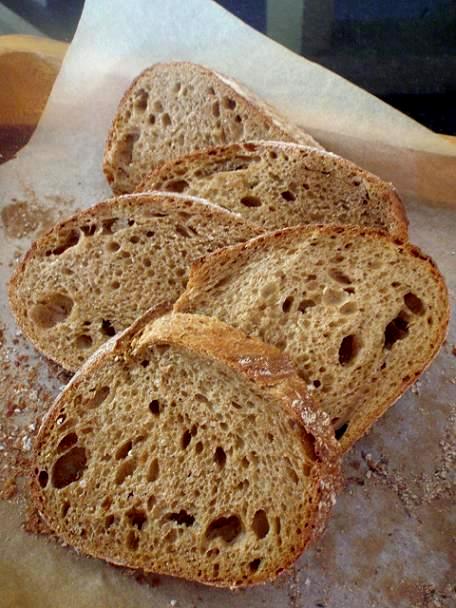 As the loaf is being sliced ... 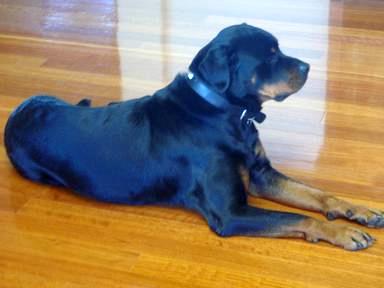 You've written such an inspiring story, Shiao-Ping, that I almost hate to tell you that Dan Lepard doesn't like molasses. :-)

That thread is 4 years old and it is always amazing how much people can change their views on ingredients.   Your breads are indeed inspiring to many and I'm sure Dan Lepard would be honored knowing you dedicated your inspiration to him.

Mini, thank you for your support.  I like people to point out to me things I don't know though.   I always look at it from an "academic" point of view.

I couldn't stop laughing when I read your comment - I should have known something like that would happen!  You see, I am imagining things.

For the record, I would like to paste here Dan's remarks from your link above:

To be honest, I don't really like the taste of treacle or molasses, but I know that some bakers do - that's why I included it. Also, in the case of the rather 1970s five grain loaf, it seemed right as bread recipes from that time would often include it. If you prefer the taste of maple syrup, then use that. The colour will be lighter but that shouldn't be an issue.

What are the good bakeries in Barcelona?

The rather 1970s five grain loaf mentioned above is on page 81 of his "The Handmade Loaf" as well as his "The Art of Handmade Bread" (same books).

Isn't it interesting that the formulae for a great majority of breads that we use today are the same for decades and centuries.  They started as "inventions" before they become "traditions," don't they.   And, some have even become "classic."

I often think in the rather loooong chapter of the human history there are no surprises - no surprises in the sense that every historical event has or had a social-economic background and/or geographical, climatic background to it, which was not apparent at the time.   A lot of breads were made that way centuries ago because that was what was available, or because that was convenient for the life style then.

We live in a very privileged world (well, a large part of the world anyway); there are so much available to us.  Why limit ourselves?

I thought it was pretty funny too when I read that he didn't like molasses. And after you wrote such a glowing tribute to him!

I didn't do a search on his website before I posted my loaf.  I just went and did, but the reply I got was, no result found!   (I used the word molasses to search.)  Maybe it is because that I am not a user at his site?!   Not to worry.  Thank you very much, Pamela, for letting me know.   The link you provided also tells me sometimes writers-chefs put certain recipes there NOT because they like those ingredient combinations, but because perhaps they are what's expected of them for their books.

p.s.  Glad that your computer is now fixed.

It's interesting to learn about Dan's real tastes and motivations behind his recipes.

I love that you share your thoughts and feelings about your breads. Your writing is as beautiful as your loaves.

I resisted buying any Reinhart books because so many people own his books, use his recipes, etc.  The other day I rushed to buy ALL of his books when I read about his spiritual search (a journey) which was linked to his bread cycle (another journey) in his youth.  There are so many recipes out there, a dime a dozen, or happily provided free, as in our case because we enjoy so much people reading them.  In this day and age where there is an explosion of information because of technological advancement, haven't we had just too much information of every kind already.   And therefore if I write, I hope that I don't burden people with my rambling.   Sometimes I think I should begin my sentence with an apology... for taking up people's time... that would be a right thing to do (see I am rambling).

But, yeah, thank you.

or rambling, as you call it, is what I enjoy most about your posts. These words give life to your breads. Thank you for sharing..

Shiao-Ping, I've been reading your blog now for some time and I must say, every single thing on there looks incredible. Congratulations! It's hard to believe that you're such a young sourdough baker. I'm about to start my own blog and I hope that I'll once have such an attractive blog as you do.

One question I've got - you seem to use a lot of different starters, for instance a grape starter, this molasses starter, and so on. How many starters have you got? Why do you start that many different starters? I'm just curious. =)

Thank you for your compliment.  Right now I have only two starters in my fridge - the San Francisco starter (that I got from Northwest Sourdough) and my own home grown Australian starter.  I will soon finish up with the San Francisco starter and only keep one starter.  I'd had my own grape starter for a while but as I mentioned before elsewhere I had to put it to sleep as it was too active.  I used to have more going but I've found it unnecessary any more.

Now, I have a secret to tell (or maybe not secret as many people, too, do it this way) - I never throw away starter (neither do I do waffles, pancakes, or even pizza etc with the excess starter, just so to be not wasteful).  Almost all instructions on how to culture a starter and how to maintain a starter tell you to throw away a large portion and keep only a small amount to add onto new flour and water.  Back in April and May, whenever I read about this, I asked myself, which bit do I throw away - is it from the left hand side of the plastic container that it is kept, or is it from the center.   I've come to the conclusion that it is easier to tell people a rule to follow, than to really explain the reason why.   In general, the flour should be between 2 times to 4 times the starter culture as sufficient nourishment's for the little beasties and proper PH level (with water added).

When I finish a starter, the inside of the container always has a bit of dried starter stuck on the wall, but no more than 3 - 5 grams, I think.  So, instead of washing up the container, I would feed it with whatever experiments I fancy; molasses and water mixture is one, yogurt and milk, another.   I made pineapple jam a couple of weeks back, and I could have had a pineapple starter if I had wanted.  When the hydration part of the starter composition is not 100% like water, then the amount of flour to add is more tricky; so it is a matter of trial and error.

Further more, I do not stick to the 2 times to 4 times flour rule either.   The case in point (ie, the molasses starter for my Molasses & Light Rye Crusty Sourdough) was cultured with 100 g flour and 10 g molasses + 90 g water (with just the 3 - 5 g of the dried starter stuck on the inside wall of the plastic container).  And of course, this is way too much food for the microorganism to consume so you know it's going to take a lot longer than the usual 6 - 8 hours turn-around time.  For maybe 36 hours there was no movement in the container; some small bubbles only slowly appearing right around 36 hours.   It's probably after 48 hours that I decided to use it in the Molasses & Light Rye Crusty Sourdough, I then added enough flour (ie. 33 g) and no water to bring the starter hydration from 100% to 75%.

So, you see, you can have any starter you want in a matter of a couple of days or at most 3 days (provided you have a healthy starter in the beginning); there is no need for a ready supply.

This seems like a long footnote to a simple answer you required.  I am sorry to bore you or anybody with this write-up.  In the old days when I was working, if I could not answer my client's question in two sentences, I would have been booted out of their office in no time.  I don't know where my training has gone.

I have found in any endevour that I take on, it is the reasoning behind the rules that I seek.  I believe it is what is not there that is governing what is apparent.  The rules are there for convenience and to provide a framework for us to start work, but need not be a limitation.

Thank you for your curiosity.  It's been fun for exchanging ideas.