Yes I did it.  I found rye flour in Seoul, South Korea, in the Bangsan Market between wall paper shops and packaging tucked into the alleyways kept cool in the winding shadows from the burning sun.  I found two different ryes, that with my third, and my unending curiosity can only lead to one thing.... a comparison.  I have already gathered that there might be some flavor differences evidenced by the interesting additives in North American recipes...

So I decided to use Daniel Leader's Soulful German Farmhouse Rye in Local Breads combining all the ingredients except for added yeast (don't want it) and final 70% rye flour.  That way the only difference in flavor will be the flours.  All three doughs will be handled alike.

I mixed up the recipe and divided the liquid into thirds, added 117g rye flour to each bowl moistening the flour and covering for one hour.  I had already started noticing differences...

Bob's is a slightly coarser flour, has more speckles, is darker (but not by much) and not as sticky as the other two

Austrian 950 has dough color between the two but in the picture they look all look alike.

All mixed well, all sticky (typical rye) so I use a wet silicone spatula to fold the doughs twice.   After 3 hours the loaves were gently shaped with wet hands patted with oatmeal flakes and set over cutout bread letters to mark the bottoms.  (4 o'clock is Bob's, 12 o'clock is German)  They were rising nicely (not a whole lot) when they went into the oven.  (tip, it is very hard to judge rising in a flat round bowl shape) 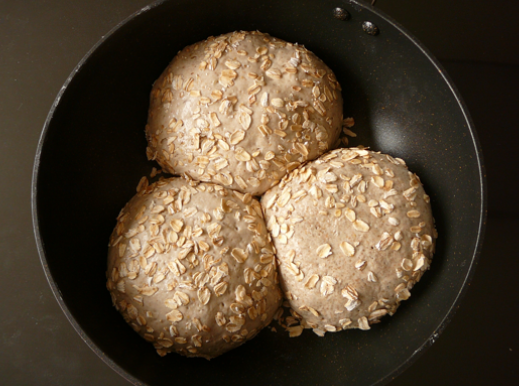 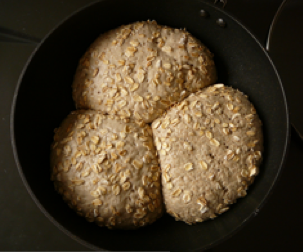 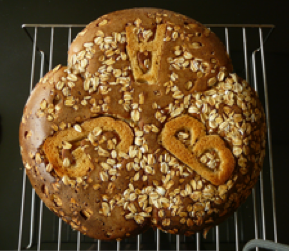 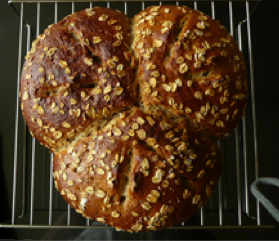 The doughs seem to rise in relationship to fineness of the flour.  Bob's is the heavier and coarser so it rose slightly lower than than the other two.  1150 and 950 were pretty close in height but the 950 rose just a tad more.  The darker color of Bob's is even darker after baking.  Now to squeeze in another picture, the crumbs.  Austrian is on left, German right, Bob's is the darker of the three, first on the bottom then on the top. 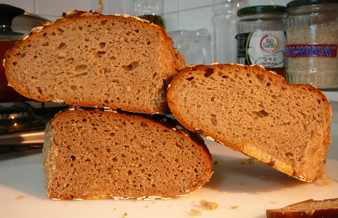 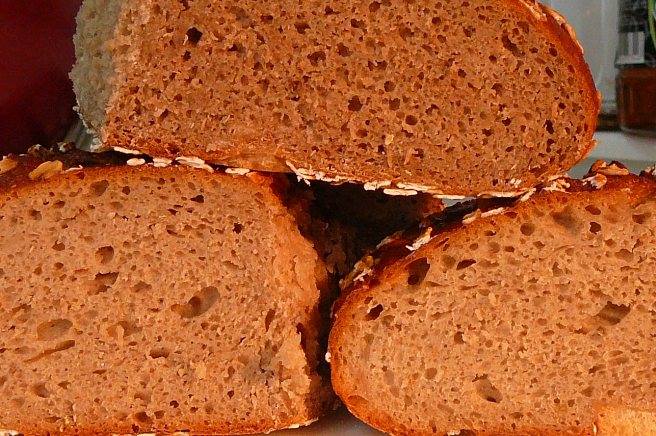 All have a moist heavy crumb (We like it that way) but the differences are slight but mostly in color and texture of crumb in the mouth.

1150 feels smoother in chewing, 950 is more stick to your teeth smooth, Bob's tend to be more stick in between the teeth which gives it a longer taste in your mouth.

After two days the sour is growing but I still can't tell one from the other as far as taste goes.  The Austrians at the office yesterday could also not tell any flavour differences.  They just wanted more.  So I've been baking and playing.  I keep in mind that Bob's won't rise as high as the 950 (or peaks sooner having more whole grain).  I made a loaf yesterday with Bob's and gave it a longer steam in the oven, 10 min instead of the 6 minutes in the above bread.  It came out lovely rose higher and being consumed as I write.   It also went into a banneton, tall and narrow.  I also use more spices than the recipe but far from overpowering the rye.

So.  I Guess I blew the top off that urban legend if there ever was one.  They all taste pretty much the same.  Thanks for waiting patiently for the results.

Yes, Indeed. It must be ready by now!

It took me a bit to figure out that the first two didn't "win", but were priced in "won"... I think.

Now we all want to know which one won?

A rye by any other name is still a rye.

Very interesting results and commentary, not to mention creative (ABCs), Mini. Thanks so much for performing this most scientific test and posting the results.